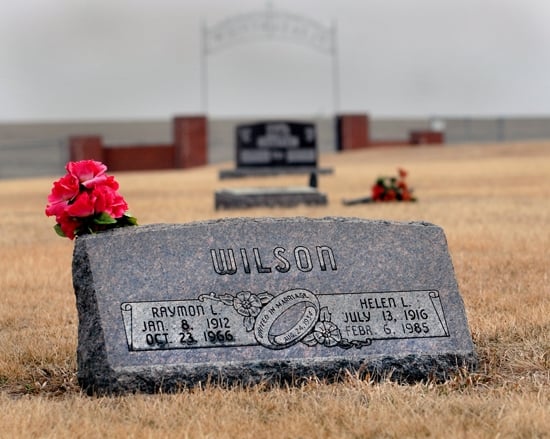 Helen Wilson is buried next to her husband, Ray, in Pleasant View Cemetery near Pickrell. Her rape and murder in Beatrice in 1985 led to six people spending a combined 70 years in prison for a crime that DNA evidence years later would show they did not commit. (ROBERT BECKER / Lincoln Journal Star) 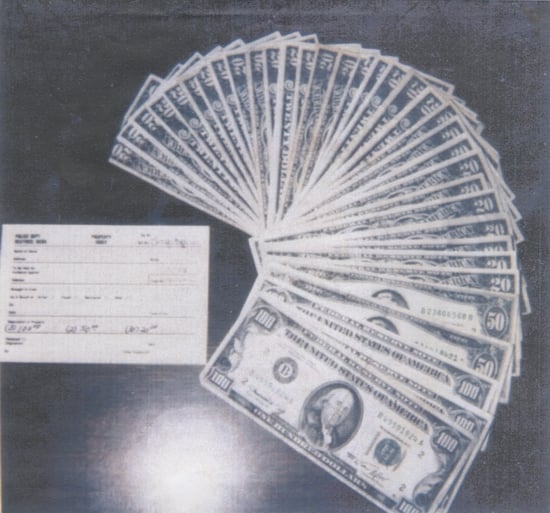 Investigators tried to tie a piece torn off a $5 bill (left) found on the floor of Helen Wilson's kitchen to murder suspect Joseph White. (Courtesy of Nebraska Attorney General) 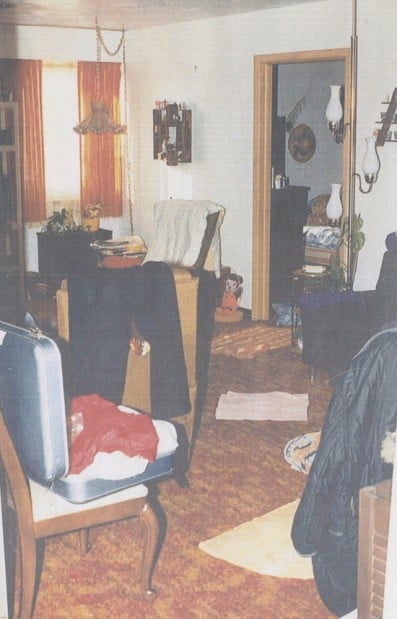 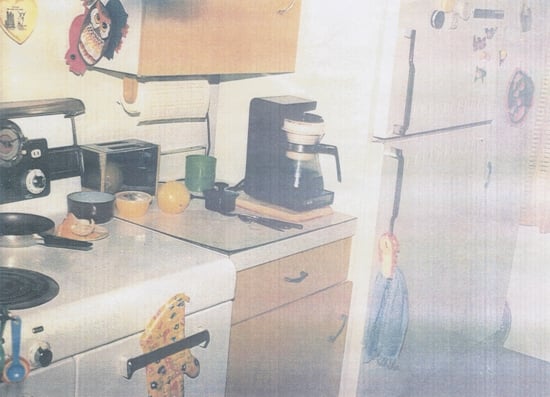 This evidence photo shows half a pot of coffee left in Helen Wilson's apartment. (Courtesy of Nebraska Attorney General)

On the trail of a wolf

The 68-year-old Beatrice widow felt miserable when her son visited the evening of Feb. 5, 1985.

Darrell Wilson kept her company while his wife was bowling. Katie always stopped by after Tuesday bowling league to chat with Grandma, drink coffee and watch Carson.

When Katie arrived at about 9:30, her mother-in-law apologized because no coffee was on. As the couple left, Katie said she would call at midnight to remind Helen to take more medicine.

She tried again at midnight and again 15 minutes later.

Katie and Darrell assumed she had slept through the rings.

"I should have gotten up and gone over there," the son said. "I've carried guilt ever since that night because I didn't."

Scene of the crime

The first Beatrice police officer to arrive laid down towels so investigators wouldn't tramp over evidence.

And he photographed the scene.

Helen was on her back, wearing a blue nightgown, stockings, a watch, a mother's ring and her wedding band. A washcloth covered her face. Underneath it, an afghan was tied around her head so tightly it smashed her nose to the side.

The officer's camera documented the bedroom, with its signs of struggle in the blood-stained sheets, a blood spot on the wall.

He photographed the tiny bathroom. And he got the kitchen, with its short counters and half-pot of coffee. Another click captured a ripped $5 bill on the floor.

He took 23 photos in all and videotaped the scene.

Other officers collected hairs and blood samples from Helen's clothes before moving her body north to Lincoln for an autopsy.

Among other things, detectives kept the torn bill, a black-handled steak knife, the bed sheets and a pair of women's underwear that had been carefully laid on the couch. They preserved about 50 pieces of evidence.

They also cut out the carpeting underneath the body and dusted for fingerprints.

Gage County Attorney Richard Smith walked through the four-room apartment in his role as coroner.

"I was taught in school when you look at a crime scene, you should be writing your closing argument," he would say years later.

The assailant had pried the door from the jamb and slipped the lock. An overturned footstool indicated a struggle.

Helen Wilson had been raped and suffocated, her hands bound.

She had been discovered by her sister, who lived in the same apartment building. Her sister's husband called 911 at 9:29 a.m. Feb. 6.

An autopsy would show Wilson had pneumonia and likely died because an afghan was tied tightly over her face.

Police ruled out robbery as a motive because nothing of value was missing, the chief said. Nor did the apartment appear to have been ransacked.

Wilson's murder marked the fourth Beatrice homicide in five years, but this one shocked people more than the others.

Helen Wilson was a defenseless great-grandmother with no enemies. Who would attack her with such savageness?

It harkened to a series of 1983 attacks on elderly women. All three fought off their attacker, but police had made no arrest.

A need to investigate

Burt Searcey timed his lunch to the TV news so he could catch midday commodity reports. But the lead story on Feb. 6, 1985, made the price of corn insignificant.

When Searcey heard the victim's name, he connected it to the owners of Jan's Cleaners, where he used to take his police uniforms.

Back then, he investigated major crimes for the Beatrice Police Department, but now he raised hogs. Farming had taken him back to a life he once sought to escape.

He grew up near Liberty, a tiny town southeast of Beatrice. His family owned farmland and grain elevators, but Searcey wanted to do something different. He tried welding, but it wasn't for him.

Then he thought of law enforcement. As a young man watching TV police dramas, detective work made sense to him.

He was hired by the police department, spent seven weeks at the Nebraska Law Enforcement Training Center and started as a patrol officer.

He displayed a knack for investigation and would rise to the rank of detective sergeant, supervising other officers who investigated felonies.

But that had been years ago.

As he ate his lunch and thought about the woman who had been murdered, the 37-year-old felt his investigative senses reawaken.

A plan was forming.

"I had the need to investigate," he would say years later.

Joseph White's journey to Beatrice started in 1962, when he was born the second of six children in Cullman, Ala.

His father was a maintenance man. His mother assembled telephones.

He had a stable, normal upbringing. He graduated from high school in 1981 and couldn't wait to see what was outside Alabama.

The military gave him a ticket.

He ran a Teletype machine for the Army and was stationed in South Korea for two years. He liked field duty but had run-ins with a second lieutenant and generally had little use for military rules.

He developed a taste for liquor, particularly bourbon and Coke. After he failed alcohol rehab in 1984, the Army gave him a general discharge under honorable conditions - a step below an honorable discharge.

He was 21 and unattached. His thumb got him from Fort Hood, Texas, to Hollywood Boulevard.

Shortly after his arrival, the 6-foot-4 Alabaman was offered a job at a studio that made low-budget gay movies and magazines. White spent about two months earning $10 per hour, posing for photos and acting as a nude wrestler under the name Lone Wolf Bronson.

White and Taylor formed a quick friendship. They were both from the South - Taylor was a native of North Carolina.

One day, she mentioned Nebraska, where she had a daughter she wanted to get back to see. In late 1984, White accompanied Taylor to Beatrice.

He fell into a loose community of young adults living on the edge. Some drank, some took drugs, some worked dead-end jobs and tried to survive with limited skills and prospects.

White spent his days in the R&S Bar, nursing a few beers and trying to upgrade his living arrangements.

He stayed with a woman whose mother prostituted in truck stops, another whose ambition was to be a country singer and a third who simply wanted to be a modern hippie.

When he struck out, he'd end up at a friend of Taylor's, an 18-year-old high school dropout from Wymore who cooked at a truck stop.

Thomas Winslow, peeved about White's freeloading, suggested a way to make up for unpaid rent. One afternoon, Winslow's girlfriend caught the two men having sex.

During his time in Beatrice, White had one run-in with police, an arrest for being drunk and disorderly. The charges were dismissed.

There's a country song that goes, "The secret to a long life is knowing when it's time to go."

In March 1985, White called his mother in Alabama. She sent him money for a bus ticket.

Burt Searcey told Wilson's family he was a private detective in February 1985 and got the OK to investigate her death.

He knew people in Beatrice plugged into the party scene. He let it be known he wanted information about Helen Wilson's murder.

A month passed before he heard a 17-year-old girl knew something. Searcey found her April 7.

A report Searcey wrote in 1989, nearly four years later, described what Confidential Informant No. 1 told him:

At about 7:30 a.m. on Feb. 6, the teen related, she was standing outside of school, waiting for classes to start. She noticed police cars across the street by Wilson's apartment building.

An acquaintance approached and said she had killed an old lady inside the apartment.

"Oh, sure," the informant said.

"Look, I can tell you where the lady is laying and what happened to her," the woman said.

"Oh, sure," the informant said she replied.

The acquaintance said the victim would be found in the living room, on her back with her hands bound and her face covered with an afghan.

"Hey, look, I can prove it. I can even tell you the color of a footstool laying by the body, turned upside-down. The footstool was vinyl covered, green in color."

Yes, the confidential informant knew the identity of the woman who gave her this information: JoAnn Taylor.

Taylor also said she didn't do it alone, Searcey would write in his report.

Yes, she mentioned a name.

Gage County is hiring an outside attorney to defend county officials being sued by five of six people wrongly convicted for the 1985 rape and murder of a Beatrice woman.

Presumed Guilty: About this series

Information for these sketches of people involved in the Helen Wilson homicide case comes from court documents, psychological profiles and per…

Helen Wilson is buried next to her husband, Ray, in Pleasant View Cemetery near Pickrell. Her rape and murder in Beatrice in 1985 led to six people spending a combined 70 years in prison for a crime that DNA evidence years later would show they did not commit. (ROBERT BECKER / Lincoln Journal Star)

Investigators tried to tie a piece torn off a $5 bill (left) found on the floor of Helen Wilson's kitchen to murder suspect Joseph White. (Courtesy of Nebraska Attorney General)

This evidence photo shows half a pot of coffee left in Helen Wilson's apartment. (Courtesy of Nebraska Attorney General)
© Copyright 2020 The Lincoln Journal Star, 926 P Street Lincoln, NE | Terms of Use | Privacy Policy
Powered by BLOX Content Management System from TownNews.com.
You don't have any notifications.