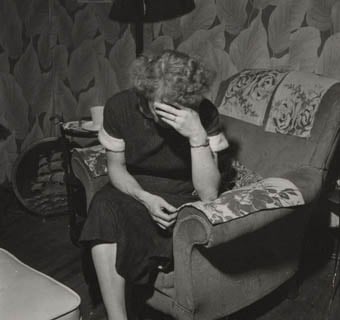 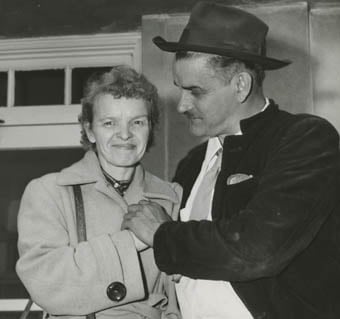 Debra Rhoades was standing in line at the grocery store when she heard the news.

Eight murdered at a mall in Omaha. The gunman, a troubled teen, also was dead.

The woman behind Rhoades couldn't hide the venom in her voice.

Didn't even turn around.

Inside, she was sinking.

It was another slap in the face for those who have carried the Starkweather name in Lincoln, who still pay the penalty 50 years after Nebraska's deadliest murder spree, Rhoades says.

No one has ever asked Rhoades what it's like to bear the sin of an uncle put to death in the electric chair nearly a decade before she was born.

She wants you to know: You can't even imagine.

"My whole life is knowing my uncle did this," she says from her northwest Lincoln trailer, cigarette in one hand, Kleenex in the other. "It keeps getting brought up. It's in my face, and there's nothing I can do."

A half-century hasn't erased our memories of the Starkweather murders, which some say stole the city's innocence.

Nor has it healed the wounds he inflicted on those connected to him, who scattered as far as Pomeroy, Wash., where a Starkweather brother lives, and Lansing, Mich., last known home of Starkweather's onetime sweetheart Caril Ann Fugate, whose role in the murders is still being debated.

I know how you feel, she thought. It's with you forever now.

"People don't realize what it does," she says. "It's always going to hurt."

Rhoades learned early not to let too many people get close. At school, girls bullied her, calling her "killer."

Her brothers had to be escorted through the hallways by police officers, she says.

A boy once teased one of her brothers: "Hey, Starkweather, who's gonna be your next victim?"

Her brother whipped around. "Shut up, or it'll be you."

Rhoades dropped out at 16.

But the nightmare followed her.

She believes she has been turned down for jobs and apartments because of her last name.

When people hear it - Starkweather - or see it on a check or a driver's license, she says, they give her the look first, and then the questions come.

Wow … are you related? How does it feel?

How could she ever answer? It feels like not trusting anyone, like being stereotyped by an entire state. It feels like getting a hug from your grandfather in a Kmart deli and hearing a stranger ask him: "Don't you know you're hugging a Starkweather?"

It feels like wheeling your newborn through the grocery store and having a woman you've never met tell you it took some gall to give your son your last name.

She didn't then. She turned away fast and took her baby to the car.

That was one lesson she learned long ago.

Never let them see you cry.

Miles away is another woman burdened by the killings. She maintains she is a victim. Others call her a killer.

Caril Ann Fugate was 14 when she accompanied Starkweather during those deadly days.

Among the murdered were her mother, Velda Bartlett; stepfather, Marion Bartlett; and 2-year-old half-sister, Betty Jean Bartlett, whose bodies were found behind their home on Belmont Avenue.

Fugate has said she did not know her family was dead and that she went along with Starkweather to protect them.

A jury didn't believe her. Fugate was found guilty of first-degree murder for her role in the robbery-murder of 17-year-old Robert Jensen of Bennet.

Originally sentenced to life in prison, Fugate served 18 years before authorities commuted her sentence to 30 to 50 years. Paroled in 1976, she went to live with a young Michigan couple who had befriended her in jail after seeing a TV special about her.

Fugate always had dreamed of becoming a nurse and was a medical technician in a hospital for nearly 20 years before recently retiring, according to her friend Linda Maria Battisti, a Cleveland lawyer who is co-writing a book she says will prove Fugate's innocence.

"My feeling is that people in Lincoln don't want to accept that she may be innocent," says Battisti, whose partner in the writing of the book, "The 12th Victim," is Lincoln attorney John Stevens Berry.

"There was so much hostility against her. To the people of Lincoln, Caril was poor, she was considered a no-count: 'You're on the wrong side of the tracks. You went with this piece of trash, so you must be just like him.'

"People don't want to admit that we may have made a terrible mistake," Battisti says.

A. James McArthur, whose father was Fugate's defense attorney during her trial, remembers Fugate as "very frank and very open."

"My father was a very good judge of character," McArthur says. "My father could spot a phony a mile off."

Fugate's lower-class background - her family didn't have indoor plumbing, for example - and an aggressive police campaign to show her guilt that included rumors and lies contributed to a prejudiced public, McArthur says.

A guilty verdict, his father feared, was inevitable.

Even so, McArthur believes Fugate's choices since 1976 show parole was the right decision.

"So much as I know, she's never gotten so much as a parking ticket."

Others say Fugate deserved the same fate as Starkweather.

Starkweather's father, Guy, often said Fugate should have been "sitting on Charlie's lap" when he was executed in 1959. And the Starkweather family continues to believe Fugate was a willing participant in the murders.

Barbara Thompson, Rhoades' mother and former wife of Rodney Starkweather, says Charles Starkweather told her during a prison visit that Fugate had committed at least one of the killings, an assertion Starkweather also had made to police.

The Starkweather family also believes Fugate had ample opportunity to flee during the killing spree but chose not to.

The family has had no contact with Fugate. They don't wish to.

She must live with what she did, the Starkweathers say.

Del Harding, the Lincoln Star reporter who covered the murders and the trials, is convinced of Fugate's guilt, a belief he bases partially on hundreds of conversations with law officials that led to information that didn't always reach the public.

Fugate's demeanor during the case also shocked Harding. He remembers her acting far older than her 14 years.

"I covered a lot of murder trials, and I've never seen anybody with a look in their eyes like Caril," he says. "She looked daggers. … She was just cold, emotionless, never smiling. There was never a flicker of warmth that I saw."

Fugate always has maintained her innocence.

Her last public statements came on Aug. 8 and 9 in 1996, when Fugate was a surprise guest on Berry's local radio program after her request for a pardon was denied.

Fugate took calls from listeners - many of them sympathetic to her - for hours, saying repeatedly that she had tried to break up with Starkweather before the murder spree and that she had been a hostage, scared to run because she thought he would kill her or her family.

Fugate broke down in tears at one point, thanking callers for their support.

"Don't you think that I, every day of my life, that I think to myself, 'Why, dear God, didn't he just kill me and be done with it?'" she said, according to a transcript of the interview Berry provided to the Journal Star.

Callers included Fugate's sister, a niece and old acquaintances who said they always had believed in her innocence.

Crying, Fugate said: "You have to realize this is the first time that anyone has ever came forward on my behalf."

She had received support before, at least privately, evidenced by stacks of letters and cards mailed to her when she first was jailed.

The letters were provided to the Journal Star by a Lincoln man who found them at the bottom of a box he bought at a tag sale at the former home of then-Lancaster County Sheriff Merle Karnopp and his wife, Gertrude. The man requested his name not be used.

Most of the letters contain prayers, well wishes and Christian literature as writers urge Fugate to turn to God for forgiveness.

One teen named Vicki asks to be Fugate's friend, chatting about football games and the pep club. A family sent cards on Easter and Valentine's Day and signed them "In Christian love." A woman asks for Fugate's birthday and dress size and promises to mail a Bible. She says she doesn't know Caril but loves her, and, like many writers, she requests a return letter.

It's unclear whether Fugate did write back or whether she read the letters at all.

Battisti says her book will allow readers to meet "the real Caril" for the first time.

"I think she's an incredible woman. I'm humbled in her presence," Battisti says. "She's a very strong person. Caril probably deep down cannot forgive herself for going along with Chuck.

On one of her first visits to Fugate's home in Michigan, Battisti met Fugate's small yellow bird, Moses, which was flying freely throughout the house.

To be polite, Battisti kept quiet about her fear of birds, even when Moses crawled up her leg.

Only when the women became close did Battisti confess that fear.

Fugate's reply: "Nothing will live in a cage in this house."

Fugate has perhaps one thing in common with the women who carried Starkweather's name: They believe it's time to let the memories die.

Thompson, 68, whom Starkweather once affectionately called "Sis," says there's no value in stirring up old emotions.

"Why should we live with what he's done?" Thompson says. "Why should I wake up and feel like I have no business being here?"

Perhaps if people could see her now, she says through tears, they'd finally drop their curiosity.

"You try to be a better person. You try to be rubber," she says. "You take your troubles to God, and you try not to let people know it bothers you.

"But it does. It always does."

Starkweather case was a big story for a young reporter

Friends of murdered teens wonder what might have been

She keeps the pictures on her bedroom wall. A boy on his tricycle. A young man in his Navy blues.

Wards were a generous couple who loved to travel

He always went in the back door of the stately white house on 24th Street, through the kitchen, the breakfast room, down two steps, into the den.

BENNET - August Meyer kept his farmstead as neat as a pin.

Spree ended in Wyoming with one final victim

Wilda Johnson Macy lifted each of the Cub Scouts up, high enough so they could peer through the window at the 19-year-old.