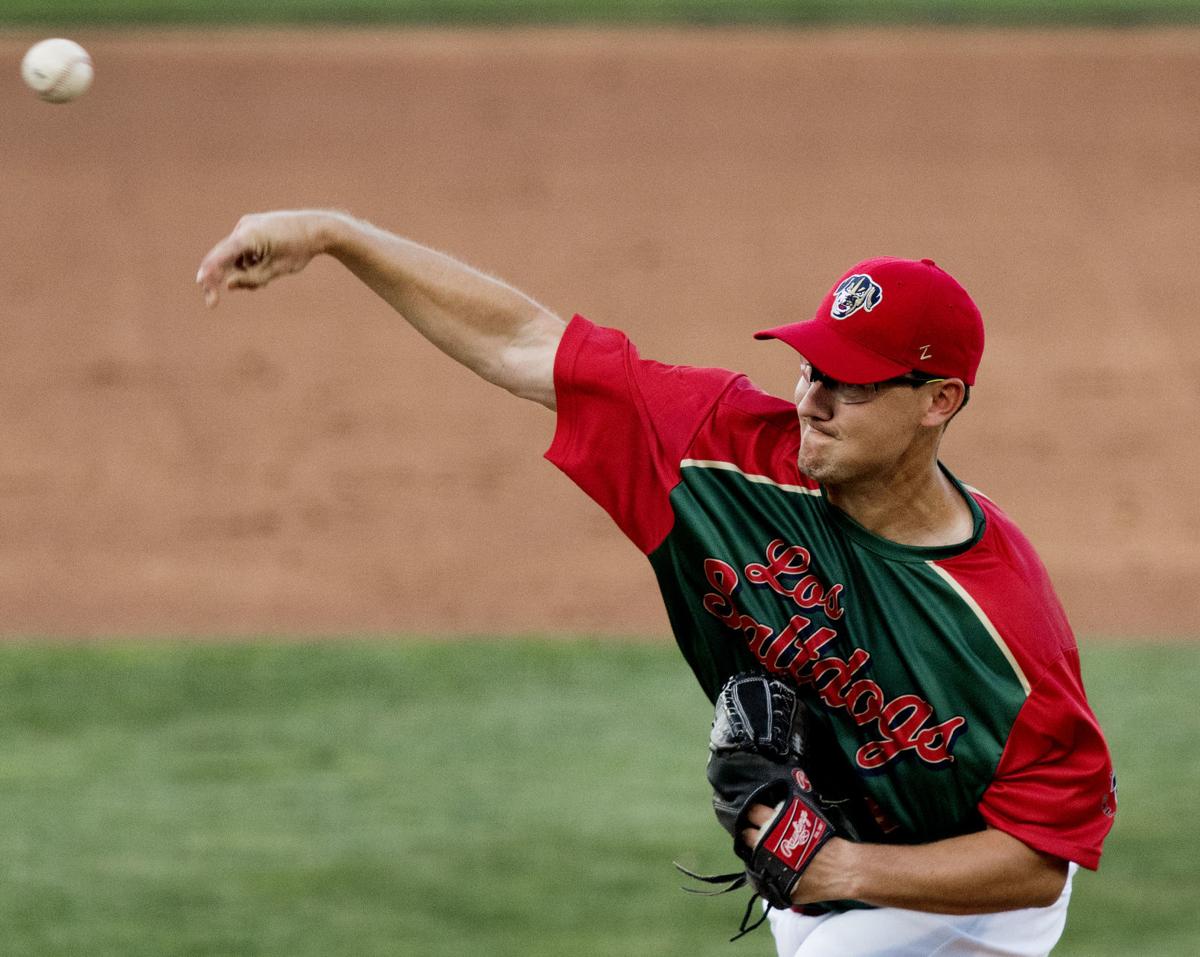 Lincoln Saltdogs’ starting pitcher Ricky Knapp delivers to the plate against the Fargo-Moorhead RedHawks on Friday at Haymarket Park. 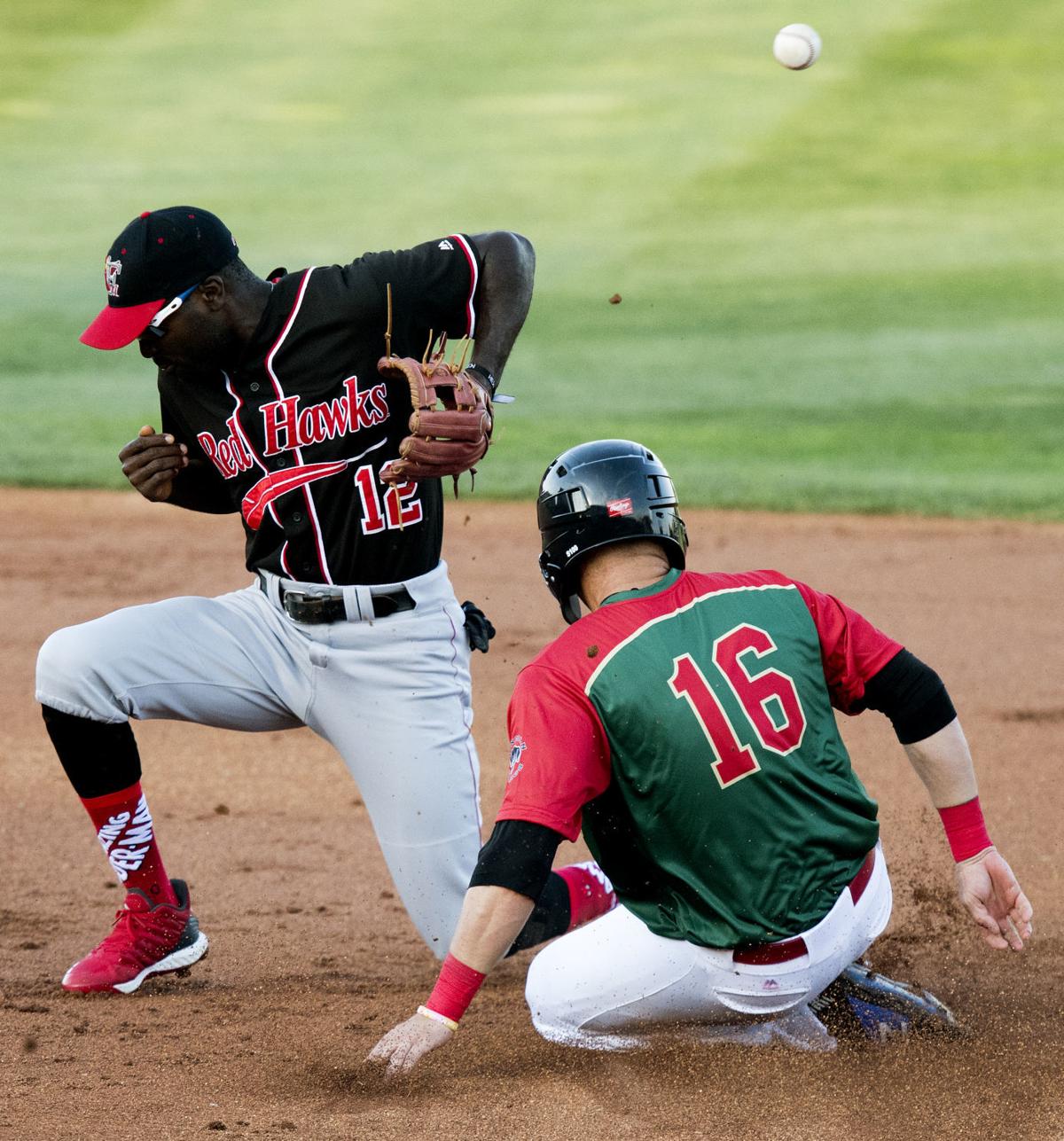 Lincoln Saltdogs’ Josh Mazzola (16) steals second as the throw from the catcher gets past Fargo-Moorhead RedHawks’ Devan Ahart (12) on Friday at Haymarket Park. 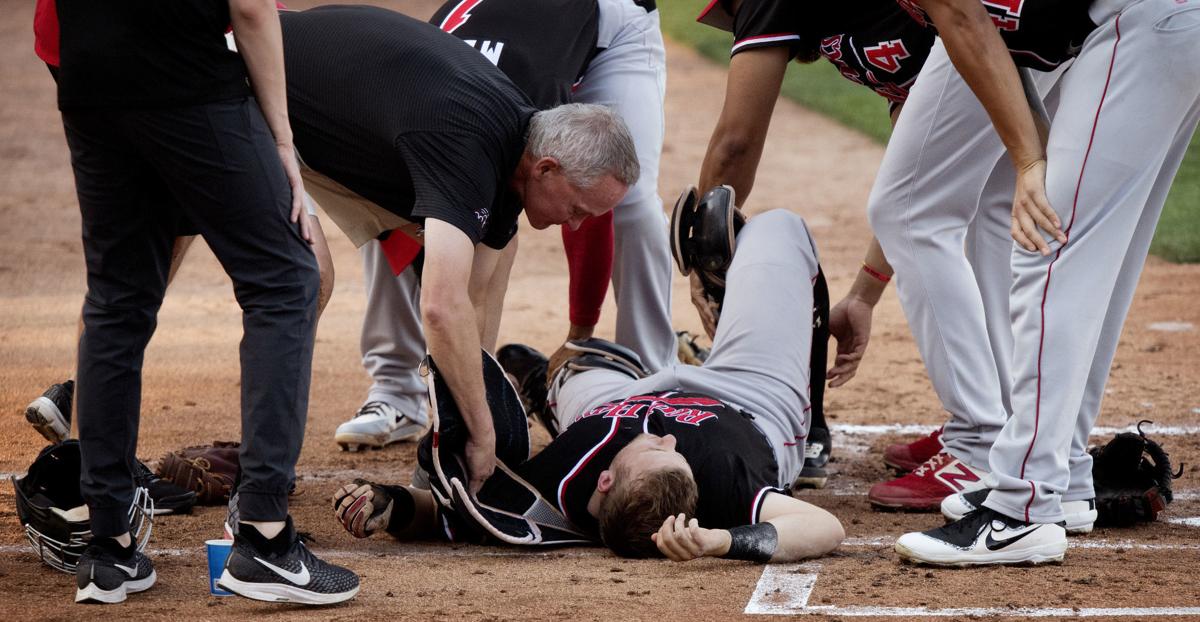 Fargo-Moorhead RedHawks’ Brian Olson (49) lays on the ground after getting hit in the groin by a foul ball off the bat of Lincoln Saltdogs' Curt Smith on Friday at Haymarket Park.

In the Lincoln Saltdogs' 19 seasons, they have never had a losing streak reach 11 games.

That changed Friday at Haymarket Park as the Fargo-Moorehead RedHawks defeated the Saltdogs 8-7 in front of 6,378 fans.

“I'm super-proud of my club,” Lincoln manager Bobby Brown said. “We just played two really good games against the best team in the league. The only thing you can do in baseball is look forward to the next day. We will go to Sioux Falls and play our tails off there, too.”

Former Saltdog T.J. Bennett broke the 7-7 tie in the top of the ninth with a solo home run. The blast was the RedHawks' third of the game, with all three giving Fargo-Moorhead the lead at the time. The RedHawks had a three-run blast in the second inning and a two-run home run in the sixth. Bennett's heroics came off Saltdog reliever and former teammate Shairon Martis.

“Martis played with (Bennett), and so did (catcher Daniel) Herrera,” Brown said. “They had a game plan, and I think the ball just leaked back over the plate. I think they were trying to go in and it didn't quite get in there.

“T.J. is a good hitter and he's got some power and he made us pay.”

Lincoln held its first two leads of the three-game series Friday — 2-1 in the first and a 6-5 lead in the sixth. The Saltdogs tied the game in the seventh on a fielder's choice.

The Dogs, who came into Friday batting .188 with a 2-7 record against left-handed starters, finally broke through against southpaw Sebastian Kessay (7-0).

Lincoln scored two of its four runs in the fifth on consecutive back-to-back Kessay wild pitches that ended his night. He allowed seven hits and six runs to Lincoln, but got off the hook after Fargo-Moorhead regained the lead in the sixth.

“Our guys came out and really swung the bats well (Friday),” Brown said. “We handled Kessay really well today, which I was real proud of.”

The first inning took 32 minutes, including a 10-minute delay for RedHawks' catcher Brian Olson, who was carted off the field with a groin injury after taking a foul ball off Curt Smith's bat.

After the delay, Smith promptly turned a 3-2 count into an RBI double. Josh Mazzola followed with a single and Randolph Oduber drove in Smith with a sacrifice fly to give Lincoln a 2-1 lead.

Lincoln now hits the road again to begin a three-game series against the Sioux Falls Canaries on Saturday. The Saltdogs will look to end two streaks, as they are also on an 11-game road losing streak.

Mike Tamburino diced his way through the Lincoln Saltdogs' lineup Wednesday, the same way he does deli meat in the offseason — effortlessly.

Trailing 3-0 in the fourth inning of Tuesday's American Association All-Star Game, the North squad scored in five straight innings on its way …

A look at how the Saltdogs fared on Sunday.

The Saltdogs look to end their losing skid in Saturday's contest against Texas.

The AirHogs scored three runs off Lincoln starter Ricky Knapp before he recorded his first out.

A look at how the Saltdogs fared Friday.

Curt Smith's seventh RBI of the series was an important one Thursday.

Curt Smith homered twice and recorded five RBIs and was a part of seven different Saltdogs to record a multi-hit game as Lincoln snapped an 11-game losing streak and an 11-game skid on the road in Sioux Falls, South Dakota.

It has been a month of curtain calls for Curt Smith of the Lincoln Saltdogs.

Lincoln Saltdogs’ starting pitcher Ricky Knapp delivers to the plate against the Fargo-Moorhead RedHawks on Friday at Haymarket Park.

Lincoln Saltdogs’ Josh Mazzola (16) steals second as the throw from the catcher gets past Fargo-Moorhead RedHawks’ Devan Ahart (12) on Friday at Haymarket Park.

Fargo-Moorhead RedHawks’ Brian Olson (49) lays on the ground after getting hit in the groin by a foul ball off the bat of Lincoln Saltdogs' Curt Smith on Friday at Haymarket Park.