The Lincoln Saltdogs have been on the right side of close games so far this season, entering play Wednesday 9-1 in contests settled by three runs or less.

Chicago scored twice in the ninth inning to earn a 5-3 win against Lincoln, which has lost six of its past seven games.

In Lincoln manager Brett Jodie's eyes, it's the first time this season his team lost a game it should have won.

“This is one of the first ones that we feel like we gave away,” Jodie said. “There have been some others that we have lost, and you would like to think you had a chance but needed some miracles to happen.

“I think this is one that we really should have had, especially at home.”

Chicago (16-7) capitalized on mistakes to turn the game's momentum a few times.

Lincoln pitcher Brandon Cunniff, who had allowed just two runs in his past 10 innings, came to the mound in the ninth inning and allowed the two runs for Chicago to win. Cunniff gave up three hits and walked two batters.

The Saltdogs (13-9) only managed to score one run with the bases loaded and one out in the seventh. That inning ended after Hunter Clanin was thrown out at third with the team attempting a double steal.

“I thought we did not play as clean and kind of gave away some things that could have been game-changers for us,” Jodie said. “It was more of the mental things that we messed up on that could have made a big difference. That is what it comes down to when you play a tight game like that.”

After trailing the entire game, J.R. DiSarcina and Ryan Long each knocked in runs to tie the game in the seventh and eighth innings.

Other than the five runs scored in the final three innings of the game, both offenses were quiet.

“You always want to look for that big knock, and we did get a couple of big ones to tie it up, but you are always looking for that next one,” Jodie said. “Just need to clean up, play a little smarter, a little crisper. But we had a chance.”

Garett Delano had a quality start on the mound for Lincoln, striking out eight in six innings of work. He gave up four hits and two runs, which came on a home run from Trent Bauer.

“He pitched out of some jams and kept his pitch count down,” Jodie said. “He was very efficient, found the zone. He definitely kept us in there and we had a chance to win. I was very proud of how he threw the ball.”

The Saltdogs and Chicago wrap up their final game of six against each other this season on Thursday at 7 p.m.

After winning each of their first five series, the Saltdogs dropped both series against Kansas City and Winnipeg this week.

Dog Dish: Monarchs strike early and stay on the gas to complete sweep of Saltdogs

The Monarchs jumped Lincoln starter Garrett Delano early and didn't let up to complete a three-game sweep of the Saltdogs.

Lincoln is off to an 8-2 start at home this season: "Having the home crowd behind you ... that helps a ton," ace pitcher Kyle Kinman said.

Around the Bases: Delano 'used to' starring as a two-way player, now breaking out for Saltdogs

In 2022, Garett Delano has broken out, hitting .394 so far this season and been a rock in the starting rotation.

Whether his outing on the mound goes one way or the other, they all end the same way. With a pen and paper at his locker stall.

Around the Bases: Saltdogs shake off rough ninth to win in walk-off fashion; Baumann no longer with Lincoln

Lincoln jokes all the time about giving the fans some entertainment. Sunday was no different as the Saltdogs scrapped to complete the series sweep over Sioux Falls.

As a heat wave sweeps through the Midwest, Lincoln relief pitchers are taking a much-needed vacation of sorts as the starters return to form. 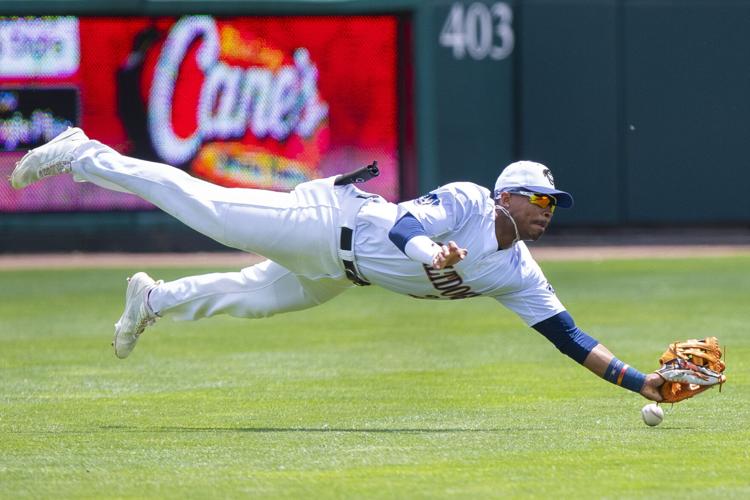 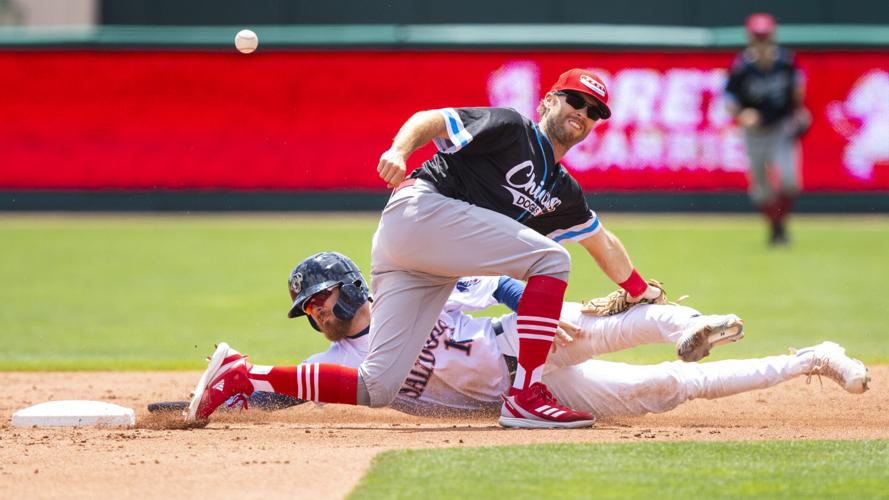 The ball pops out of the glove of Chicago's Grant Kay while attempting to tag Lincoln's Hunter Clanin as he steals second base in the second inning Wednesday at Haymarket Park.