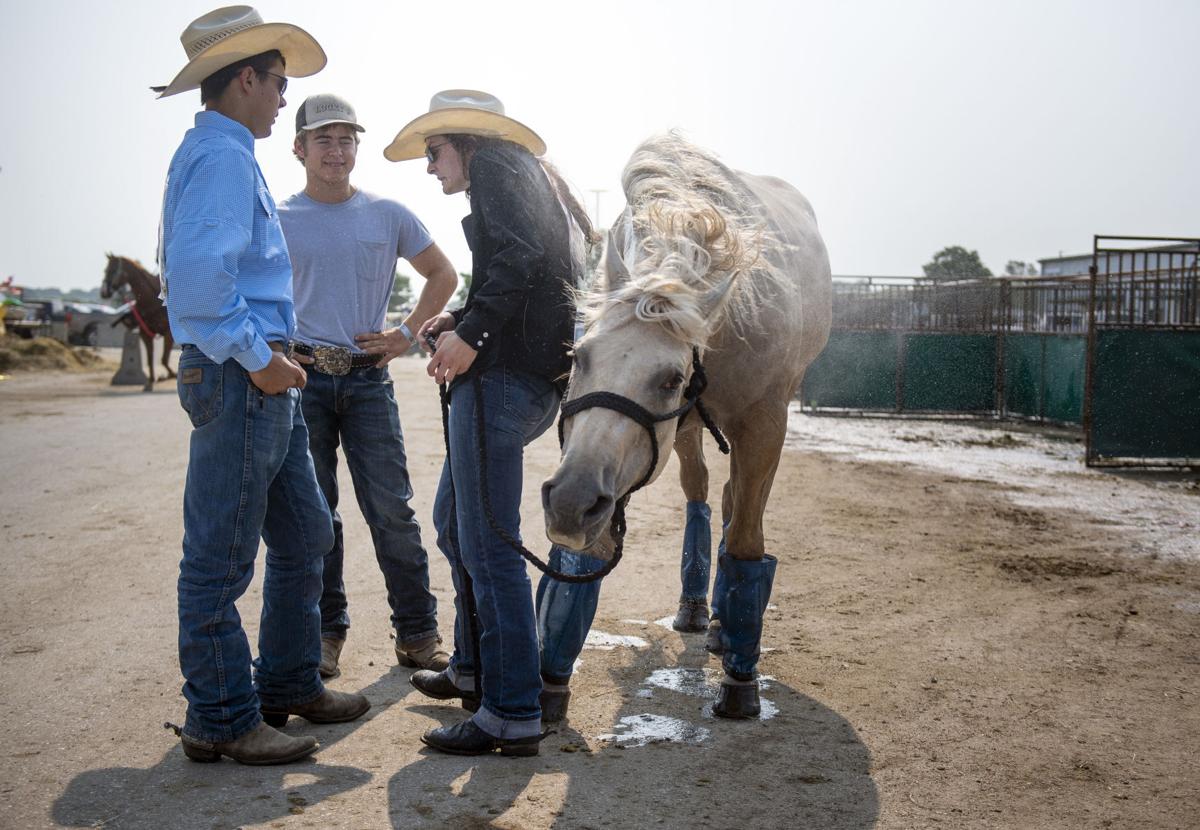 Gus Albertson (from left) and Brody Tunks of Missouri talks with Cauy Masters of Iowa as her horse, Smoker, shakes off the water during the National High School Finals Rodeo on Tuesday at the Lancaster Event Center. 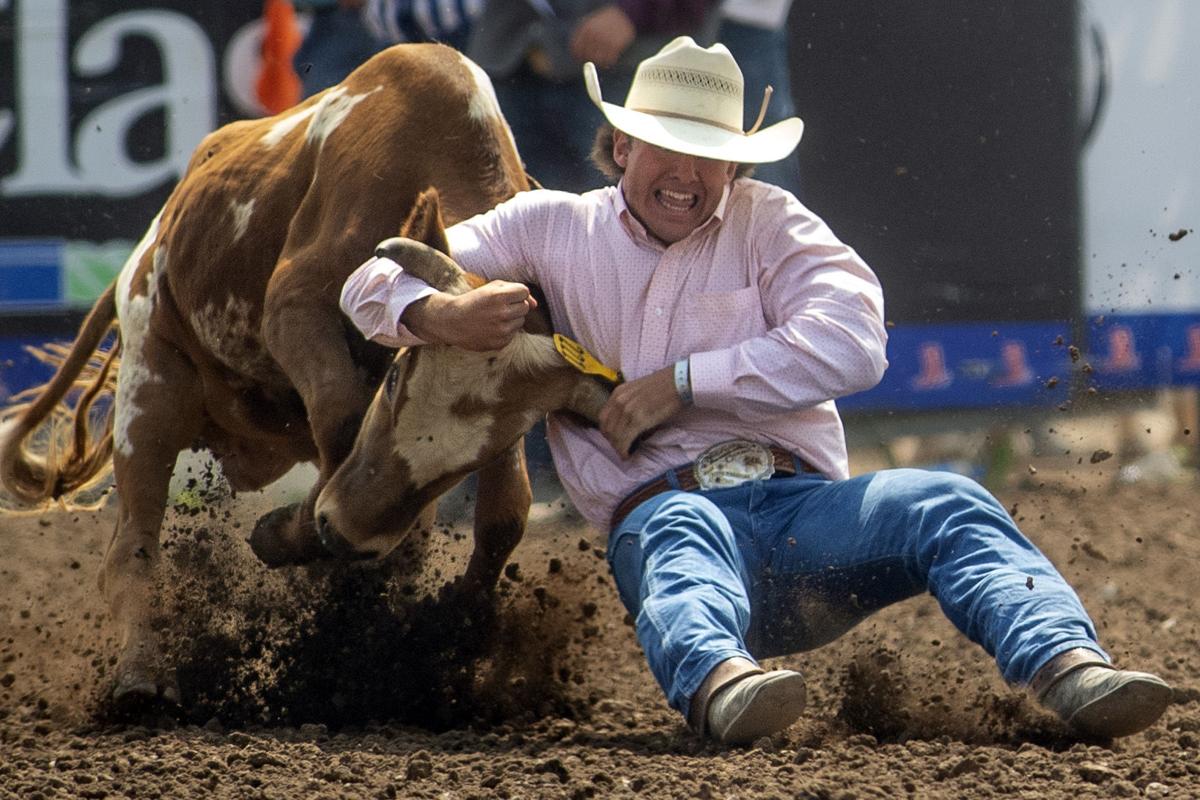 Dane Pokorny of Nebraska competes in steer wrestling during the National High School Finals Rodeo on Tuesday at the Lancaster Event Center.

According to Tori Lu, Hawaii is not just a beach paradise. It’s an island of various opportunities, and Lu and other islanders are in Lincoln to prove that at the National High School Rodeo Finals.

Tori and her sister, Miya, are both competing in shooting in Lincoln this week.

“This is an awesome opportunity for our team as a whole,” Lu said. “There is nothing on our island. There are so many limited opportunities to meet people and to see stuff like this, at this big of a level. It’s eye-opening for a lot of the kids.”

Volleyball at the... rodeo? Participants welcome break from competition with easygoing tournament

Lincoln, and Nebraska as a whole, have been welcoming the whole week. It’s something that Lu pointed out with her family.

“This is really close to Hawaii,” Lu said. “It is really cool to see how hospitable small-town people can be, and how Nebraska people in general have been really kind.”

Traveling from Hawaii to Lincoln was not easy. Lu and her family had their flight canceled and didn’t arrive until after the event started on Sunday morning. Many others

“We had a rocky start to our journey over,” Lu said. “This is really hard for a lot of others, too. They had to decide whether they want to lease a horse or if you are going to ship one here.”

The rodeo scene is not the biggest in Hawaii, but it is a strong community. According to her, the state is still a big agricultural spot. Lu grew up with parents who were also involved in rodeo, and that got her started in it.

“There are plenty of little cowboy kids around and we have our own little community,” she said. “We are all really close to each other because there are so many limited opportunities on the island. We have to have each other’s backs to make things around.”

Lu has aspirations that differ from many others competing this week. She graduated high school this spring and is attending Oregon State this fall.

“I want to be an FBI agent,” she said. “I’m taking up psychology as my major and hopefully I can achieve that in the next six to seven years.”

Need a hat? Rodeo expo brings Western vendors from all over U.S. to Lincoln

Beyond the rodeo events happening this week, contestants and locals can shop unique Western goods at the Rodeo & Horse Expo at Lancaster Event Center.

Mills qualified for nationals for the fourth time in pole bending, and discussed the pressure that goes into competing in the event.

National High School Finals Rodeo competitors and their families gathered at the Railyard for a welcome event Saturday night, which featured country music, a roping competition, food trucks and drinks.

Meeting in the middle: Oregon cutter, Florida barrel racer live on separate coasts but are tied by rodeo, Lincoln

Olivia Davison and Emily Bomann live about as far apart as you can get in the United States. Both are competing at the National High School Finals Rodeo.

'I knew it had to be a pretty good run': Callaway's Matthew Miller ties down first-round win at National Finals Rodeo

Miller barely got in this competition after claiming the fourth and final qualifying spot at the state rodeo. Now, he's got a shot at a world title.

"She grew up watching her aunt as an ambassador for the Western way of life, and now she gets to participate in it," one participant's grandmother said. "It's good for the mind, and it's good physical activity."

NHSFR Day 5 observations: Here's one way to keep cool at the finals

Beating the heat and grabbing a bite to eat. Here's what caught Luke Mullin's eye during day five of the NHSFR.

This is Olson’s third appearance in reined cow horse at the national finals, and he qualified for the final short round in both his previous finals.

Florida's Ava Grayce Sanders was going about her business back at her horse stall like she normally does.

Gus Albertson (from left) and Brody Tunks of Missouri talks with Cauy Masters of Iowa as her horse, Smoker, shakes off the water during the National High School Finals Rodeo on Tuesday at the Lancaster Event Center.

Dane Pokorny of Nebraska competes in steer wrestling during the National High School Finals Rodeo on Tuesday at the Lancaster Event Center.