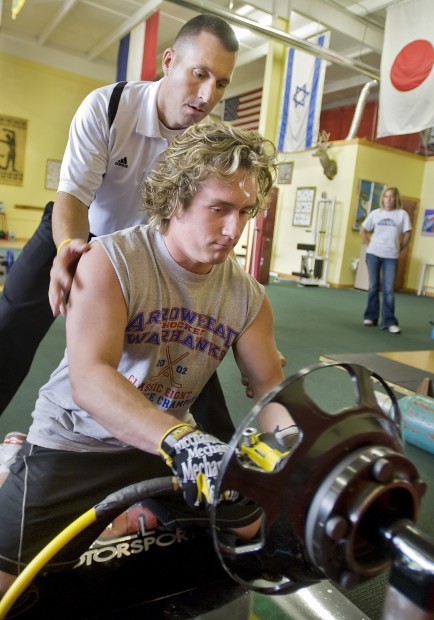 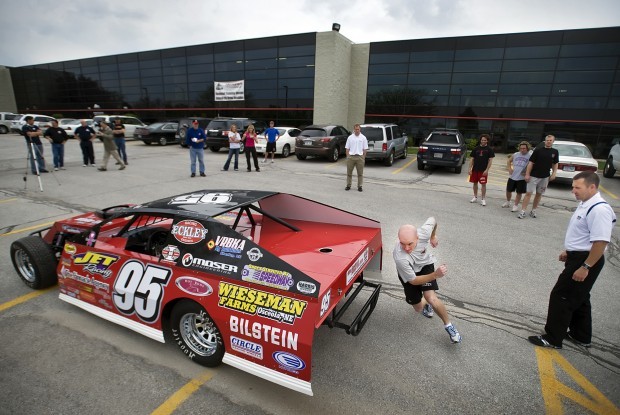 OMAHA -- The screaming whine of the compressed-air gun making lug nuts fly off the wheel and across the room was unmistakably NASCAR.

Over and over, the five lug nuts were tightened and just as quickly spun off Thursday as pit crew hopefuls completed testing to make the Hendrick Racing Team.

"I never thought about it until Jack Stark called me," said Olympic gold medalist Curt Tomasevicz, who will likely complete pit crew training in Charlotte, N.C., next month. "There's a good future financially on a pit crew, and they are looking for all-around athletes.

"My engineering degree might also come in handy because car racing and engineering go hand-in-hand," he said.

Tomasevicz didn't work out Thursday since he had just landed in Omaha after visiting with President Barack Obama at the White House.

Stark, a sports psychologist who worked with some of Nebraska's most successful football teams, helped coordinate the second annual midwest tryouts.

Stark, who works with Creighton University, UNO hockey and Hendrick Motorsports, said pit crews used to be guys who worked on the car in the garage.

"Now, it's athletes who make up the pit crews for the best teams," he said. "One hundredth of a second can be a big deal.

"That's why the Hendrick teams of Jimmie Johnson, Jeff Gordon, Dale Earnhardt Jr. and Mark Martin have top athletes who work out in our gym every day of the year."

"It looks like a lot of pressure, but I'm used to that in competition that is decided by thousandths of a second," Tomasevicz said.

He watched the candidates run through agility drills, scribble through a mechanics aptitude test and run around a race car.

"This is nothing that much different than my daily workouts," said Ellenberger, who won a bout at UFC 108 in Las Vegas last month. "Nobody hits back here."

Asked why he's interested in NASCAR, the former UNO wrestler said he wasn't a fan.

"I could be one if I was making the kind of money they make. I'd be a fan in a big hurry."

"We'll look at 150 candidates and invite about 20 to Charlotte," he said. "We hope to get about 10 out of that group signed to contracts.

"We're starting a farm system where there was no developmental system," he said. "The development of a tire changer could mean the difference in the size of check we see at the end of the race."

Reach Ken Hambleton at 473-7313 or khambleton@journalstar.com.