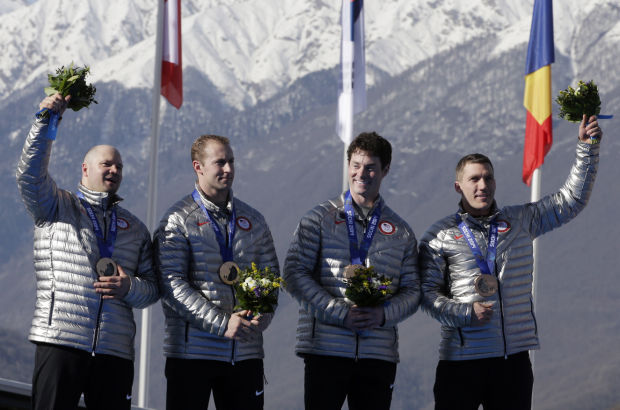 The United States-1 team, with Steven Holcomb (from left), Curt Tomasevicz, Steven Langton and Christopher Fogt, wave after they received their bronze medals during the men's four-man bobsled final at the Winter Olympics on Sunday in Krasnaya Polyana, Russia. 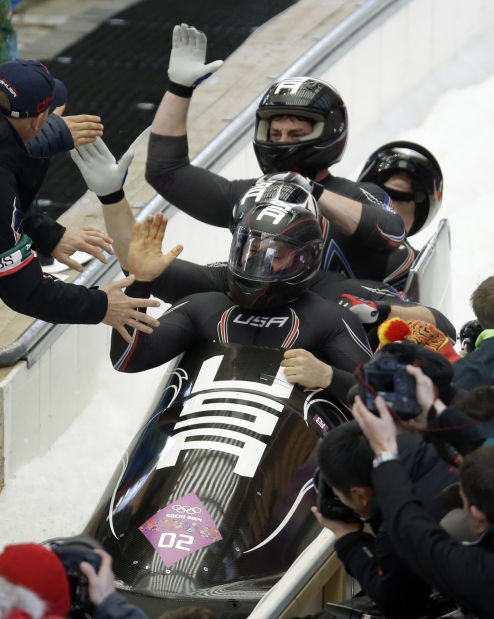 The United States-1 team, with Steven Holcomb, Curt Tomasevicz, Steven Langton and Christopher Fogt, celebrate after they won the bronze medal during the men's four-man bobsled competition final at the 2014 Winter Olympics on Sunda in Krasnaya Polyana, Russia.

Maybe Curt Tomasevicz could get a friend with a handful of quarters and he could crawl in one of those industrial dryers.

“That might get me beat up the way I’m used to in the bobsled … but not nearly the adrenaline rush you get from competing; speeding at 80 mph down a steep hill with killer turns in a sled that pounds your body all the way,” said the Shelby native, who added a bronze medal Sunday to go with his Olympic gold from 2010.

Tomasevicz might be retiring from bobsledding, but he knows he isn’t done pushing.

“It seems like when I get home, somebody is moving and they call up, ‘Hey, you squat 575 pounds and you are one of the best pushers in the world, and, uh, the car is stuck ... the tractor is stuck ... we need to get the fridge on the truck.'”

Tomasevicz’s 10-year career in international bobsledding is over.

The former Husker football walk-on became one of the most famous athletes from Nebraska when he helped the United States finish sixth at the Olympics in 2006.

Four years later in Vancouver, British Columbia, he pushed the four-man sled driven by Steven Holcomb and took home the United States' first Olympic gold medal in bobsled since 1948. There was a string of World Cup gold, silver and bronze medals from races around the northern hemisphere in the years between Olympics.

Then he pushed the United States to bronze Sunday in Sochi, again in a sled driven by Holcomb.

“Wait, wait, wait, for almost two weeks," Tomasevicz said Monday. "Then, boom, we’re sliding down the mountain on our last run together. I got a peek at the scoreboard first. Pumped my fist, and everybody else on the team figured I was celebrating something.”

“We did it for Chris Fogt, his first Olympic medal,” Tomasevicz said. “He’s headed back to the Army. A captain. The rest of the team (Steven Langton is the fourth member), I’m not sure any of us will race again.”

There are no regrets.

“This bronze was almost better than the gold in Vancouver last Olympics because the competition was so much better, with five, six teams all capable of winning,” he said. “As it turned out, the home team, the Russians, knew the course, had a great run, put up a great number and we had a good ride to get third.”

But that was the last time for the “blood in your eyes, emotional peak where every nerve in your body is firing, and there’s chaos all around you,” he said.

“I don’t know how to ever replace that feeling of being a part of a team, representing your country, building your body and mind and world-level reputation,” he said. “No more explaining to kids ‘How in the heck did a kid from Shelby get in the Winter Olympics and win a gold medal?’”

Tuesday, he's supposed to land in Lincoln at about 6:30 p.m. and drive to his parents' home in Shelby.

“Mom still appreciates me being around, but I am a 33-year-old, and it is time to get a job, get my own place,” he said. “My brother’s got a job, and I can only put up with being a farmer for about a week a year, so I’ll look at a lot of things,” he said. Curt’s brother, Jon, teaches in Columbus.

Teaching could be in the near future for Curt, too.

“Maybe teaching physics or engineering in college or some higher ed, not baby-sitting a class that doesn’t want to learn,” he said.

There could be more graduate school for Tomasevicz.

“I’m done coaching and I will probably go get my doctorate sometime. I might use my contacts with NASCAR and see if I can apply my engineering knowledge with a team,” he said.

A few years ago, he went through a tryout with the Hendrick Motorsports racing team as a tire man.

“I’m at that stage where it takes my body a little longer to warm up and get loose,” he said. “I’m in as good a shape as ever. I still have a good 30-meter sprint time and I can lift and push more than I ever thought possible.”

Tomasevicz is still a member of the Olympics Athletics Council, helping represent Olympians in issues such as blood doping, eligibility and rules changes.

“I’ll see some of the hundreds of people I came to know and love all these years and I’ll get to go home and see the people I’ve always known and loved,” he said.

And he’ll probably get more opportunities to do things such as throw out the ceremonial first pitch at Wrigley Field, present the Top Ten list on "The Late Show with David Letterman," visit the various morning shows and conduct interviews and speak to schoolchildren around the state.

“It’s been a good run. I can’t even put into words what this whole ride has been to me.”

Shelby's hometown hero will take home a bronze medal from the 2014 Winter Games. “Everybody’s majorly supportive of him,” said his mother, Amy Tomasevicz. “Even if they hadn’t medaled, they’ve been behind him all the way.”

COLUMBUS — Curt Tomasevicz will soon be glued to the tube watching athletes he helped select for the 2018 U.S. Olympic Men’s Bobsled Team comp…

The United States-1 team, with Steven Holcomb (from left), Curt Tomasevicz, Steven Langton and Christopher Fogt, wave after they received their bronze medals during the men's four-man bobsled final at the Winter Olympics on Sunday in Krasnaya Polyana, Russia.

The United States-1 team, with Steven Holcomb, Curt Tomasevicz, Steven Langton and Christopher Fogt, celebrate after they won the bronze medal during the men's four-man bobsled competition final at the 2014 Winter Olympics on Sunda in Krasnaya Polyana, Russia.