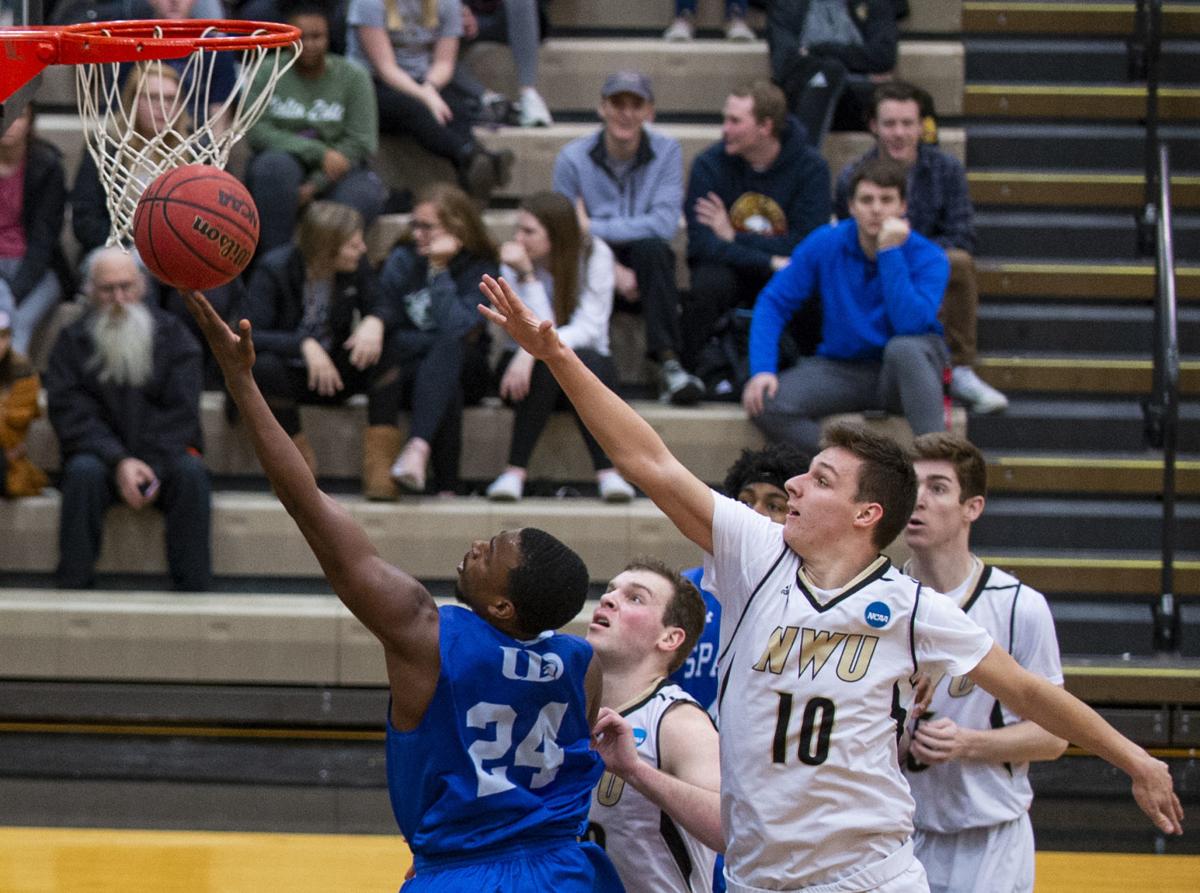 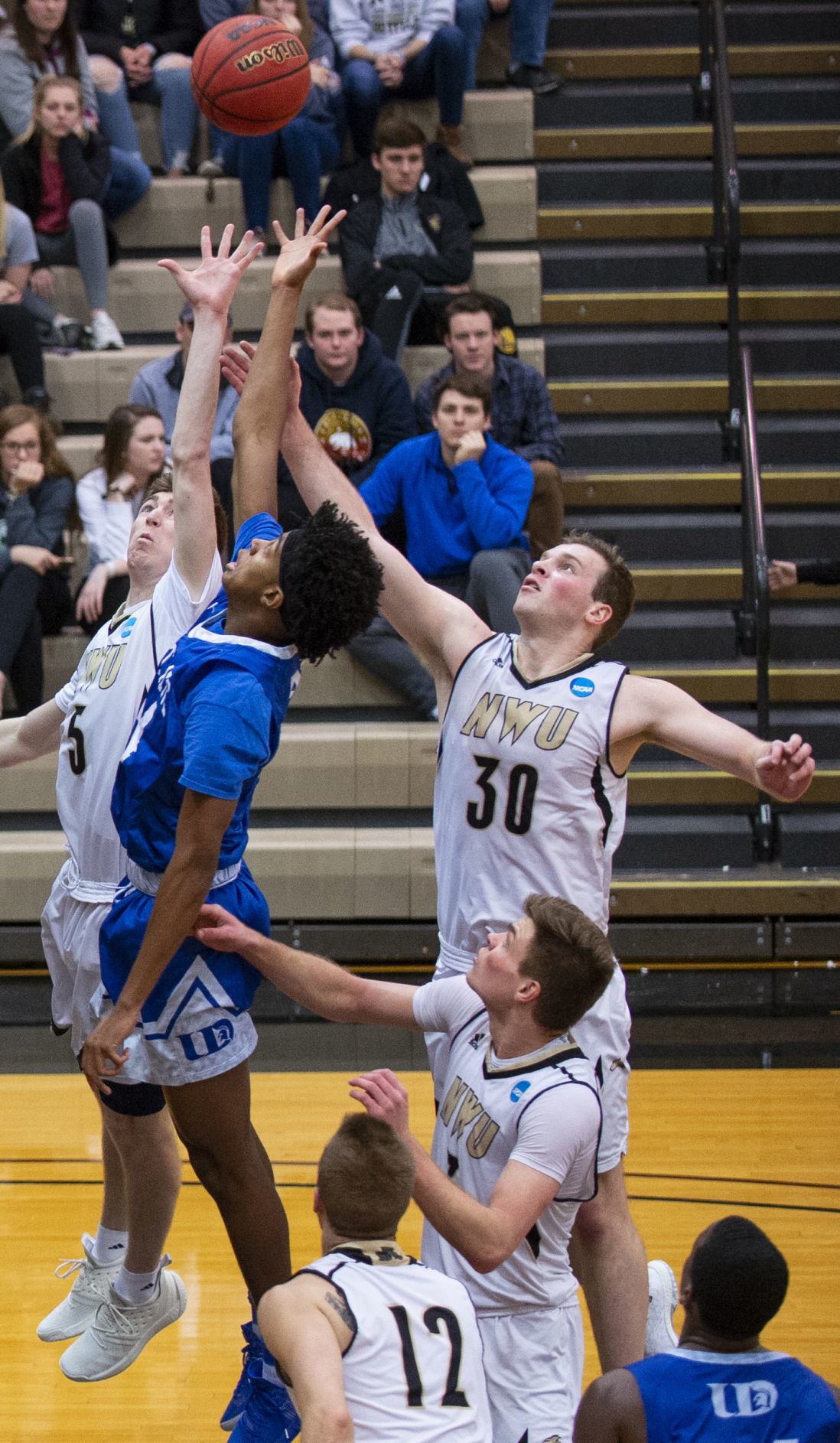 Even the best shooting basketball team in the country can have one of those games where the offense decides to take the day off.

Nebraska Wesleyan’s defense, however, was hard at work over the holiday Monday in the Prairie Wolves’ Martin Luther King Day matinee against Dubuque at Snyder Arena.

Despite struggling offensively, NWU made it even harder for the Spartans to score. A 3-2 zone limited Dubuque to 29 percent shooting as NWU claimed a 69-54 men’s hoops victory.

NWU, the defending national champion and top-ranked team in NCAA Division III, improved to 18-0 overall and 9-0 in American Rivers Conference play with its 31st-straight victory.

“We’re known for our offense, but being able to win a game on the defensive end is big,” said 6-foot-5 senior Cooper Cook, who led NWU with 16 points, nine rebounds and three blocked shots. “A lot of teams get to the national tournament and one bad shooting night can ruin it for them, but for us we have a defense and other aspects of the game we can fall back on.”

The Prairie Wolves entered the game averaging more than 92 points per game with a nation-leading 56.4 field goal percentage and 42.5 percent from beyond the three-point arc. Those numbers took a major hit in the first half as the Wolves were 7 of 32 overall from the field (21.9 percent) and 1 of 17 from three-point territory (5.9 percent).

“It’s not like us, but we know we’re all good shooters and can hit open shots, so it wasn’t surprising we came out the second half and finally hit some shots,” Cook said.

NWU warmed considerably in the second half while maintaining their defensive intensity, hitting 18 of 38 shots overall and 9 of 19 threes to outscore the Spartans 46-27 in the final 20 minutes. They knocked down 15 of their first 30 shots in the second half and 8 of 13 from long range to build a 59-44 advantage with 7:15 remaining.

Cook got it all started with a three-pointer seven seconds into the second half, three of his 12 second half points.

“We try to play the same way on the defensive end the whole way whether shots are falling or not and try to keep that separate,” Cook said. “A lot of times, our defense gets our offense going, so if we’re getting stops and getting out running, offense will come easier.”

Junior All-American guard Nate Schimonitz, who finished with 14 points and eight assists, said the Prairie Wolves “were taking shots we know we can make and are comfortable taking. We probably settled for a few too many threes after we saw a few not go down. We probably could’ve attacked better against their length, got it in the middle and played inside-outside."

At halftime, “Coach (Dale Wellman) wasn’t too happy at first,” the former Creighton Prep Super-Stater added. “He wanted us to box out better on the defensive boards.”

Wellman was pleased with his team’s defense the entire game, with the exception of the Spartans’ 14 offensive rebounds in the first half. He blamed the Wolves’ shooting woes early on less-than-precise offensive execution.

“I thought offensively the first half we were really tentative,” Wellman said. “We didn’t put anyone on their heels with our drives, with our cuts or with our ball movement. I think that goes over to our shooting. We weren’t completely focused and we were playing lackadaisical with everything we did offensively.”

Guard Peter Ragen paced the Spartans with 17 points, 12 of which came in the first half after he hit three threes.

NWU 6-7 forward Clay Reimers finished with a double-double, 11 points and 11 rebounds, while teammate Ryan Garver, who was named ARC player of the week on Monday, had eight points, eight rebounds, seven steals and six assists.

Monday also marked the return of Jack Hiller from a broken foot that sidelined him for nine games. The 6-6 junior three-year starter came off the bench against the Spartans and had seven points and six boards in 14 minutes.

Ryan Garver might have a bad right knee and a bad left ankle, but he had a good game Saturday against Wartburg.

No. 1 NWU facing challenge at No. 22 Loras on Saturday

Loras won at home against the Nebraska Wesleyan men's basketball team for the second consecutive season Saturday, but this time the Duhawks go…

NWU looking to regain No. 1 ranking at home Saturday vs. Buena Vista

Nebraska Wesleyan’s long winning streak is done, and the Prairie Wolves’ spot at No. 1 in the NCAA Division III men’s basketball rankings is n…