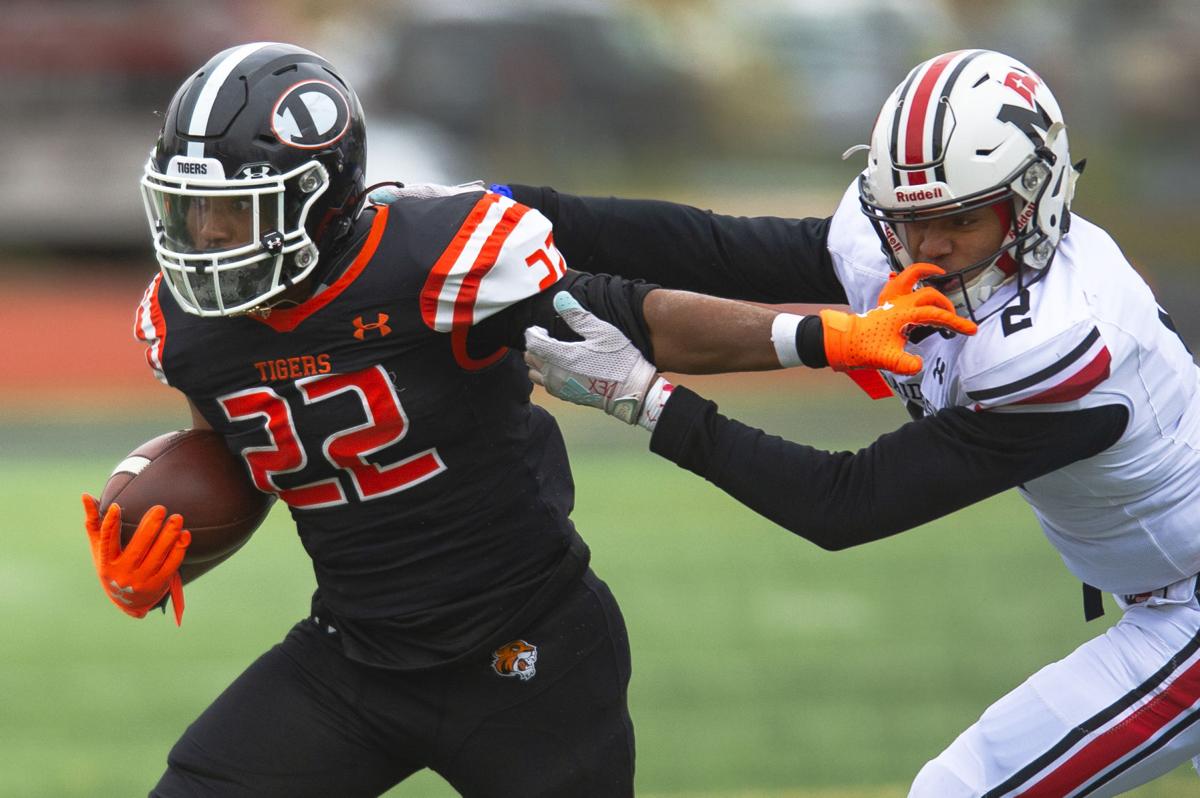 Doane running back Jacobi White tries to fend off Northwestern defensive back Lorenzo Jones in the fourth quarter Saturday in Crete. 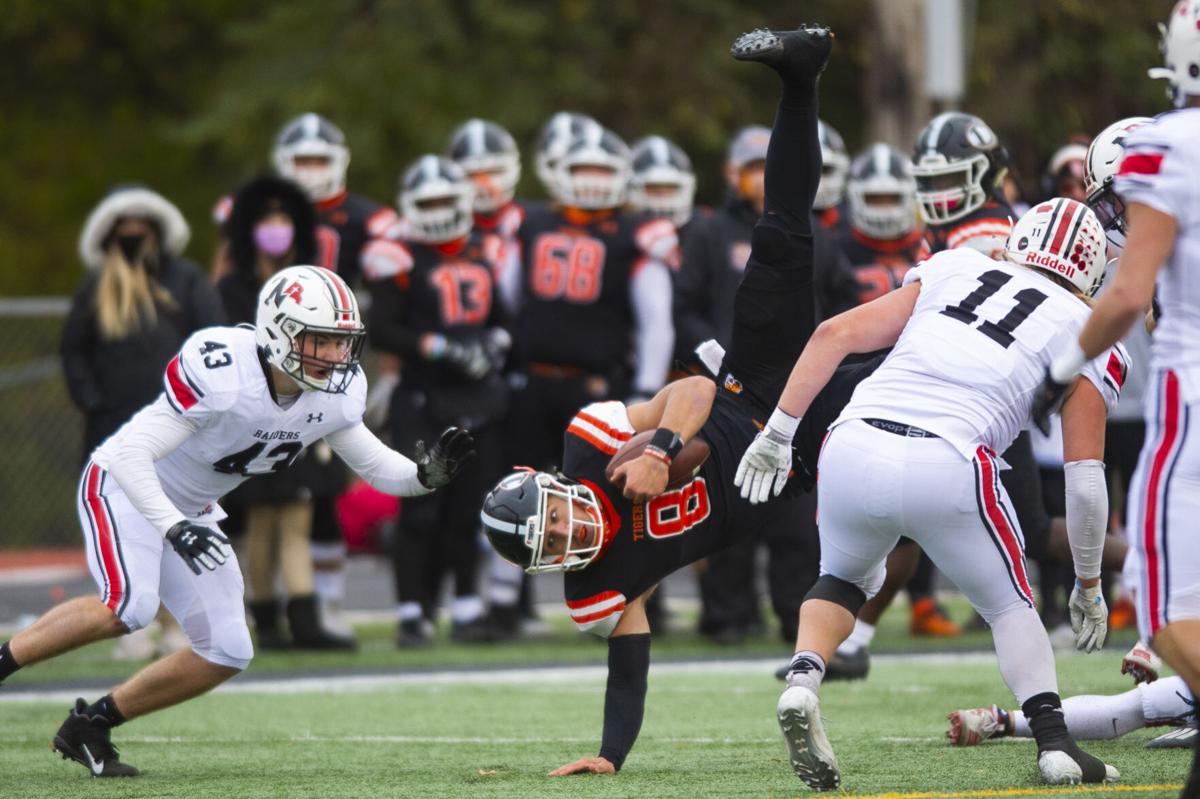 Doane quarterback Adam Wasserman (8) is upended by Northwestern, with the Red Raiders' Parker Fryar and Brett Moser converging during the second quarter Saturday in Crete.

CRETE — Senior quarterback Tyson Kooima has started every game of his college career at Northwestern, but even All-America caliber players can get frustrated a little.

But after throwing two interceptions in the first half, Kooima threw two touchdown passes in the final 30 minutes and connected on a 60-yarder to set up another score, leading the Red Raiders to a 35-14 Great Plains Athletic Conference football victory Saturday at Doane.

“Tyson’s really matured for us as a leader, he didn’t get flustered and just kept plugging away,” said Northwestern coach Matt McCarty, whose team improved to 4-1. “He did a really nice job in the second half and made some huge throws.”

Kooima, who came into the game as the nation’s leading passer at 354 yards per game, finished 16-of-23 for 270 yards. One of his two first-half interceptions came in the end zone by Doane’s Cedric Gooch on Northwestern’s first series when the Red Raiders drove it to the Doane 10.

Later in the opening period, a Tiger fumble recovery by Donte Wiggins led to a 28-yard touchdown pass from Adam Wasserman to Izaiah Celestine on the next play and a 7-0 Doane lead.

While Northwestern had four turnovers in the first half, it was a Doane (2-4) miscue — a 47-yard fumble return for a touchdown by Parker Fryar midway through the second quarter — that had the teams tied 7-7 going into intermission.

“That was a big play that kind of turned things around for us,” said Kooima, referring to the scoop-and-score. “The turnovers killed us the first half, and two of those were on me. We knew we had to take better care of the ball and just execute better, and we did those things in the second half.”

On Northwestern’s first possession of the second quarter, a 60-yard strike down the middle of the field to Shane Solberg set up Konner McQuillan’s 1-yard TD run that put the Red Raiders ahead to stay 14-7 with 10:48 left in the third quarter.

Northwestern pulled away in the fourth quarter with three touchdowns in 11 minutes. Kooima and Solberg hooked up for a 42-yard TD pass on the first play of the fourth quarter, with Solberg never breaking stride to haul the ball deep down the sidelines.

A pair of Doane fumbles led to the Red Raiders’ next two scores. Snyder recovered a Tiger fumble on the Doane 4, and Drake Brezina scored on a 2-yard run two plays later to make it a 21-point lead.

The Tigers fumbled the ensuing kickoff, and Fryar pounced on the ball on at the Doane 25. An 8-yard TD pass from Kooima to 6-foot-4 tight end Josh Faekkema high in the back of the end zone gave Northwestern a 35-7 cushion with 4:08 left.

“Our kids played well the first half defensively, forced four turnovers and kept them (Northwestern) out of rhythm,” Doane coach Chris Bessler said. “Things completely flipped in the second half. They found some rhythm offensively and made some big plays. Then we turned the ball over, and they did a good job of converting those into points.”

An 11-yard TD pass from Drake Davidson to Celestine capped the scoring with 54 seconds left. This was Celestine’s first game this season after the preseason All-American candidate sat out the first five games because of a hamstring injury. He finished with four catches for 70 yards.

“It’s good to have him back because he’s a difference-maker for us offensively,” Bessler said of Celestine, one of the nation’s top punt returners a year ago.

Another Peru State football game postponed due to COVID-19

'You know what, it’s been awesome': NWU trying to make the most out of fall football without games

The Prairie Wolves have been practicing four times a week since last month with five full-contact scrimmages on Saturday mornings.

A look at Saturday's college football action from around the state.

A look at Saturday's college football action from around the state.

A look at Saturday's college football matchups around Nebraska.

Doane football season over after game set for Saturday canceled

Doane's football season ends with a whimper following a pair of cancellations.

Doane running back Jacobi White tries to fend off Northwestern defensive back Lorenzo Jones in the fourth quarter Saturday in Crete.

Doane quarterback Adam Wasserman (8) is upended by Northwestern, with the Red Raiders' Parker Fryar and Brett Moser converging during the second quarter Saturday in Crete.