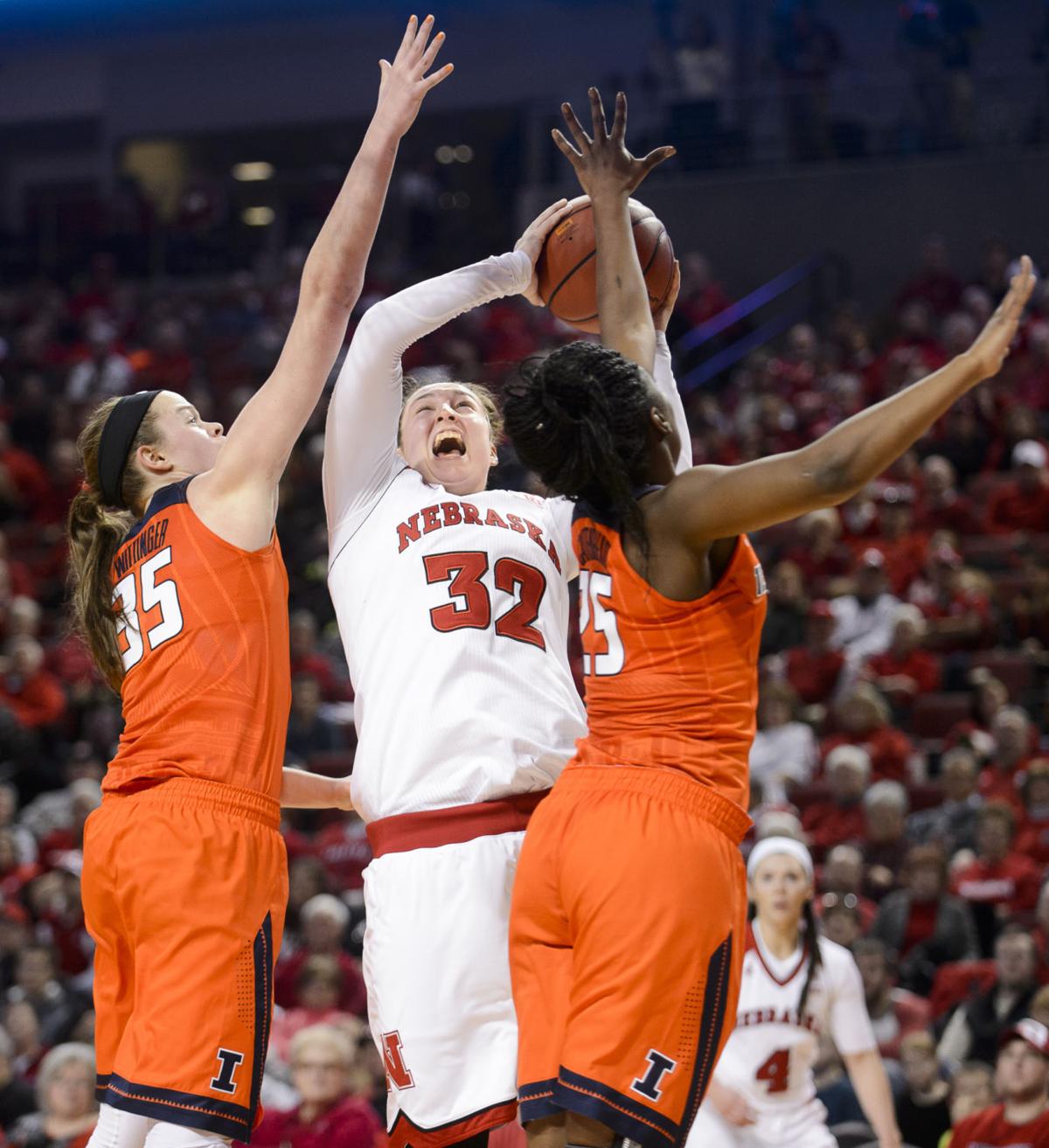 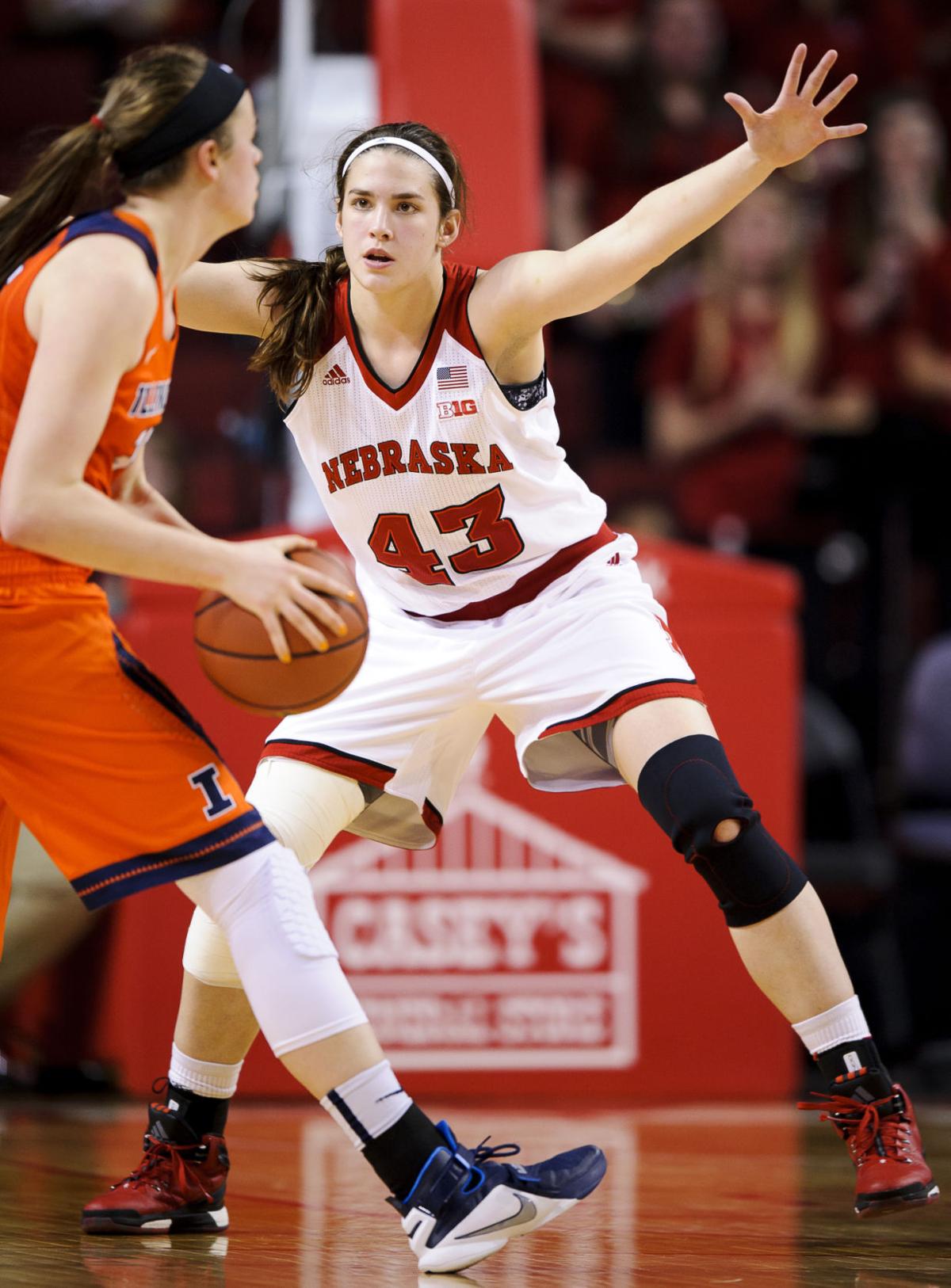 A determined effort by Jessica Shepard — determined to score, and get rebounds and loose balls, and be the best in the head-to-head matchup between two of the better high school players the state has produced — helped the Nebraska women’s basketball team to a much-needed win Sunday.

The freshman post from Fremont scored 29 points and, more impressively, had 19 rebounds to lead the Huskers to a 73-57 win against Illinois at Pinnacle Bank Arena.

Nebraska (10-5) got its first Big Ten Conference win in four tries, while Illinois dropped to 0-4 in league games.

Shepard’s 19 rebounds were five more than her career best and tied for ninth-most in school history. Her 29 points were the second-most of her career, coming one game after she was held to a season-low six by Maryland.

Shepard won the matchup against Illinois center Chatrice White, a sophomore from Shelby who played on some of the same club teams as Shepard.

White finished with 14 points on 6-of-18 shooting, but only scored five points in the second half.

“I also want to complement her defensive end,” Yori said of Shepard. “I thought she played better defense than maybe she has for a while. She guarded Chatrice a lot.”

Shepard was honest enough to say there was some extra motivation to play against White. It was fun to play not only against a player that Shepard knows, but is also one of the better players in the Big Ten.

“Last year Chatrice came (to Lincoln) and she had (four) threes and she’s a super-good player,” Shepard said. “To get to play against her in front of our home crowd, there is a little extra motivation, just because she’s a Nebraska kid and we’ve played together since we were little. It’s just a battle.”

Rebounding is largely determined by effort, Shepard said, and she felt like she had more oomph in her legs than in recent games.

Shepard felt like this was one of her better games.

“It was one of them,” she said. “I tried a lot harder than I had. On defense, I did a lot better than I have been, and just the little effort things I think were a little better today.”

“I think (Shepard) was very persistent no matter what was going on, whether the ball was going in, they were fouling, whatever,” Nebraska senior guard Rachel Theriot said. “I think she was very determined to do something with the ball — rebound. I think she had a lot of energy going into it, and it really showed and paid off for her.”

Shepard’s play helped Nebraska work through some sloppy stretches, with the Huskers finishing with 25 turnovers. Illinois’ chances were hurt by making just 3 of 22 three-point attempts.

Theriot made her first five shots and finished with 17 points to go along with seven assists. Natalie Romeo had 10 points, including two second-half threes when she got a little extra space with the defense helping on Shepard.

Romeo also did a fine job defensively against Illinois guard Kyley Simmons, who Yori said makes the Illini go. Simmons was held to 10 points and got off only one three-point attempt.

NU center Allie Havers had nine points. Also, her unselfish play of passing up some shots resulted in Shepard getting a higher-percentage shot inside. Havers had two assists.

In the third quarter, Illinois got within six points (37-31) on a three-pointer by Kennedy Cattenhead, who led the Illini with a career-best 17 points.

NU then went on 9-2 run, doing the things that Nebraska does when it’s at its best, with Shepard scoring inside, Theriot hitting jumpers and Romeo sinking three-pointers.

For the sixth time this season, Nebraska's Jessica Shepard was named Big Ten Conference freshman of the week.

"Our administration has made a great commitment to our program, and the expectations are high," said Husker women's basketball coach Connie Yori.

There wasn’t a whole lot of fun at the start of Big Ten Conference season for the Nebraska women’s basketball team, with the Huskers losing ea…

College women's basketball box score from the Nebraska vs. Illinois game on Sunday, Jan. 10, 2016 in Lincoln.

The Huskers downed Illinois on Sunday at Pinnacle Bank Arena for their first Big Ten Conference win of the season. Photos by Matt Ryerson/Linc…

For the second time in Big Ten Conference play, Nebraska’s Jessica Shepard will be playing against a former teammate when the Huskers host Ill…