Williams says Huskers didn't 'play for 40 minutes' in loss to No. 6 Indiana
0 Comments
Share this

Senior guard Grace Berger scored 22 points to lead the No. 6 Indiana women’s basketball team to a 72-65 victory against Nebraska on Thursday in Bloomington, Indiana.

Nebraska got a 17-point second-half deficit to three points in the final minute with a big fourth quarter from Alexis Markowski before the Hoosiers sealed the win with two free throws by sophomore Chloe Moore-McNeil with 23 seconds remaining.

Nebraska outscored the Hoosiers 22-15 in the final quarter. Indiana used only six players in the game and began to wear down at the same time the Huskers did a better job attacking inside the paint.

The schedule is tough for the Nebraska women, but here is one thing Amy Williams doesn't worry about with this team

With full confidence of her teammates, Alexis Markowski just keeps winning at PBA with her new team

Markowski led Nebraska with 17 points, including 10 in the fourth quarter. She also had seven rebounds and three steals. Jaz Shelley added 15 points for the Huskers.

Nebraska’s rally came without guard Sam Haiby, who left the game in the fourth quarter with an upper-body injury.

Nebraska made a big improvement after losing by 36 points to Indiana last season. But Nebraska’s players and coaches were disappointed that the Huskers waited until the fourth quarter to get really tough on defense.

“In this league, it’s so brutally competitive, and you’re going to have to play for 40 minutes,” Nebraska coach Amy Williams said on the Huskers Radio Network. “We did not do that here today.”

Indiana won despite not having its leading scorer and rebounder, Mackenzie Holmes, due to a knee injury.

But Nebraska wasn’t able to make that a big advantage because it was slow to adjust to Indiana going from playing two forwards to more of a perimeter offense.

“We have not adjusted well, and that’s going to be something we’re going to have to correct,” Williams said. “It’s part of the day and age where people are going to be in and out with typical injuries, but also the COVID situation.”

Indiana’s athleticism and experience were on display for long stretches of the game, and the Hoosiers had four players in double-figure scoring. Aleksa Gulbe added 17 points, Nicole Cardano-Hillary had 13 and Ali Patberg 10.

Nebraska (13-3, 2-3 Big Ten) has lost back-to-back games for the first time this season, and it comes during a stretch when the Huskers play four straight games against NCAA Sweet 16 teams from last season.

Indiana led by 14 points to open the final period, but Nebraska started the quarter on an 8-1 run to cut its deficit to 58-51.

Nebraska missed some key free throws in the game, finishing 11-for-18 from the line. The Huskers had 19 turnovers, with Indiana outscoring Nebraska 12-8 on points off turnovers. 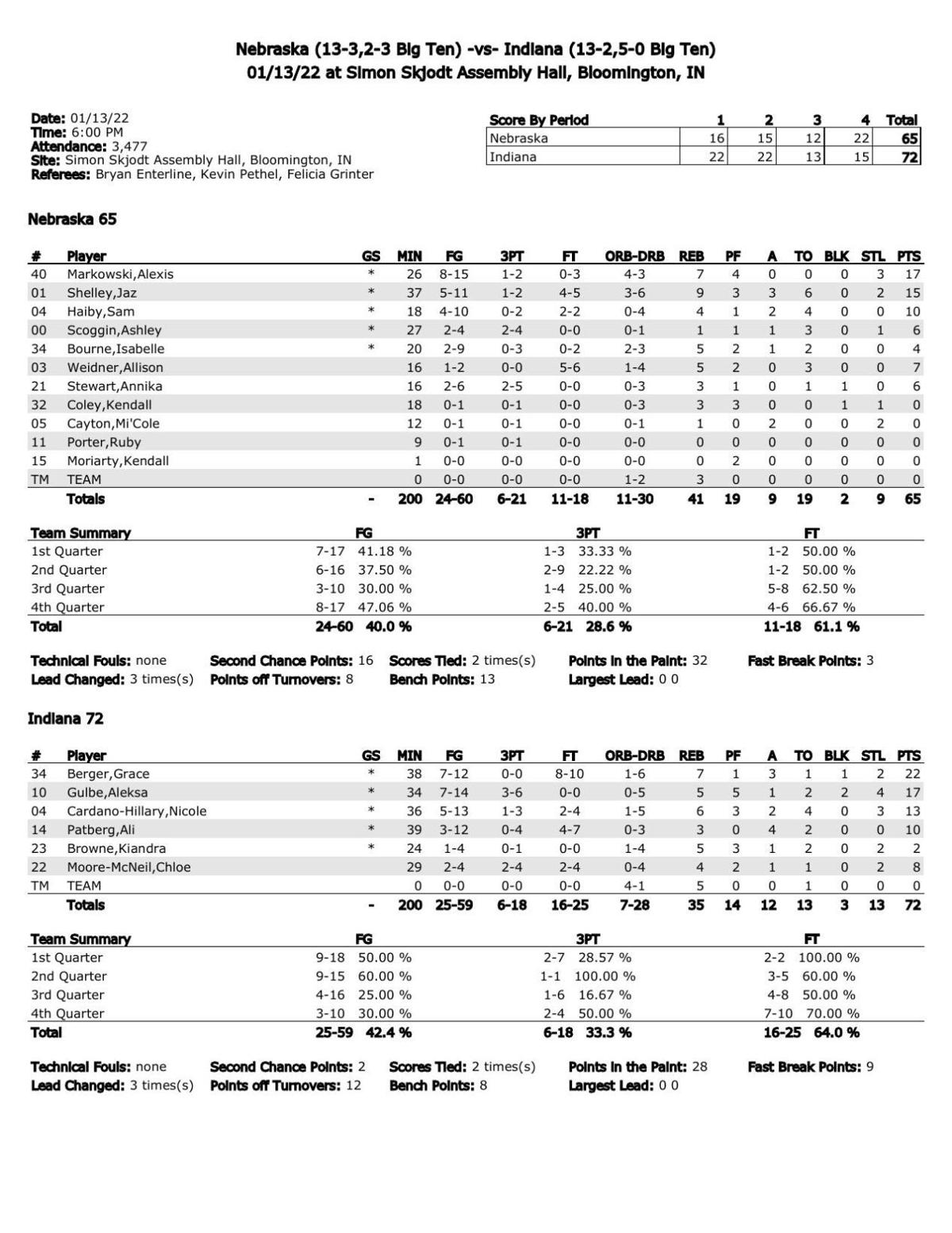 The perfect family Christmas: Amy Williams not the only one in the Gusso family undefeated this season

That both Nebraska and Minnesota State, coached by sister Emilee Thiesse, are winning a lot this season has been “awesome,” Williams says.

Nebraska hopes to finish a tough spell of games with a 2-2 record when it travels to Iowa in the hopes of evening that season series.

Caitlin Clark and Monica Czinano scored 31 points apiece to lead the Iowa women’s basketball team to a 93-83 win against Nebraska on Sunday.

Markowski made six three-pointers Sunday — the third-most by a freshman in a single game in school history.

During Nebraska's last game on Sunday at Iowa, the Huskers had at least one player and two staffers in COVID protocol.

During Nebraska's last game, the Huskers had at least one player and two staffers in COVID-19 protocol.