The Nebraska women’s basketball team used a big run in the fourth quarter to beat No. 23-ranked Michigan State 68-64 on Sunday in East Lansing, Michigan, giving Nebraska a second win against a top-25 team during the first 10 games of the season.

After a great first half by Nebraska, Michigan State outscored the Huskers 18-8 in the third quarter to take the lead.

Trailing by five points with 8:07 remaining in the fourth quarter, Nebraska went on a decisive 12-2 run over the next 4½ minutes to take the lead. The Huskers never trailed again.

“I’m incredibly proud of this group,” said Williams during a postgame interview with the Husker Sports Network. “We’re very excited to knock off a ranked opponent on their home court.”

Nebraska’s Sam Haiby, Ashley Scoggin and Whitney Brown each made free throws in the final 30 seconds of the game to fight off a comeback, and Kate Cain blocked Michigan State’s three-point attempt to tie the game with 5 seconds remaining.

Isabella Bourne led Nebraska with 18 points, but the Huskers had to play without her to end the game after Bourne went down with an apparent ankle injury in the final minute of the game. Williams said the severity of the injury won’t be known until Bourne can be evaluated in Lincoln.

“I know she was in a lot of pain,” Williams said.

Haiby added 11 points and a team-high 12 rebounds for the Huskers, giving the junior the first double-double of her career. The 5-foot-9 guard regained the lead as Nebraska’s top rebounder with 78.

Nebraska won another game with its defense, holding the Spartans to a season-low point total. Michigan State had scoring droughts of 4 and 2 minutes in the fourth quarter.

Michigan State guard Nia Clouden, who was averaging 25 points per game in league play, didn’t score in the opening 18 minutes of the game and only had three points in the first half. She finished with 14 points on 6-of-13 shooting but fouled out in the final minute, taking away one of the team’s best chances to tie the game.

Haiby guarded Clouden for parts of the game and limited some of her normal drives to the basket.

“We told Sam if (Clouden) gives it up, do whatever you can to keep the ball out of her hands again,” Williams said. “I thought Sam was doing the best that she could.”

Nebraska led 39-30 at halftime thanks to some good defense and hot three-point shooting, making 4 of 5 attempts in the half. The Huskers also passed the ball and got good shots, with 15 assists on 16 field goals. Nebraska made 50% of its shots in the first half.

The Huskers finished with 22 assists on 27 makes.

Nebraska is still playing with just eight players due to injuries and an in-season transfer, but got some help from its three bench players, each of whom are true freshmen. Ruby Porter made three three-pointers and had two assists; Annika Stewart had two points and two assists; Brown had three points, three assists and sealed the win with a free throw with 2 seconds remaining.

Nebraska only trailed in rebounding by one, 39-38, after getting dominated in that category in a loss to Michigan three days earlier.

Nebraska will have a few extra days before its next game, which could benefit Bourne. The Huskers will host No. 16 Ohio State on Saturday. 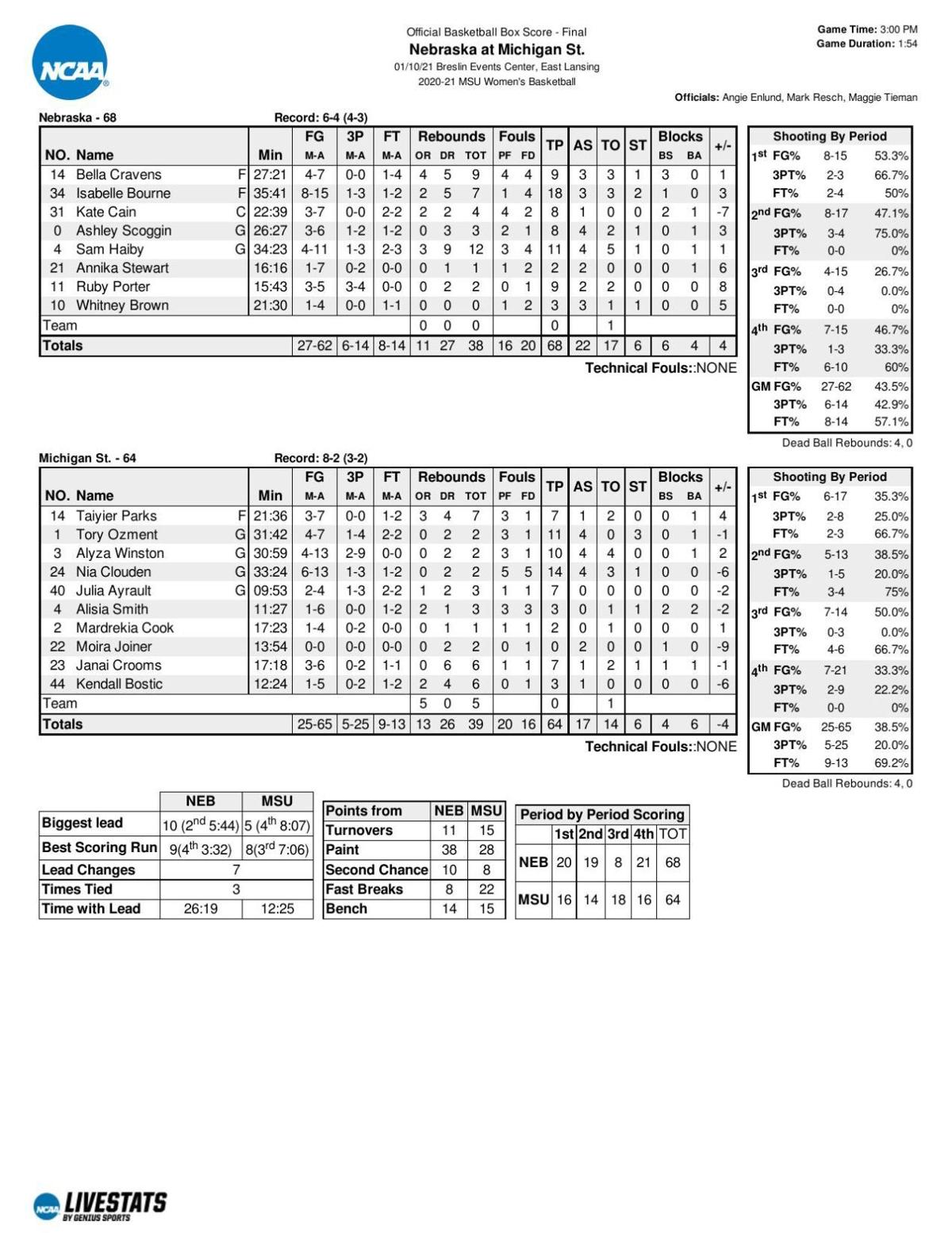