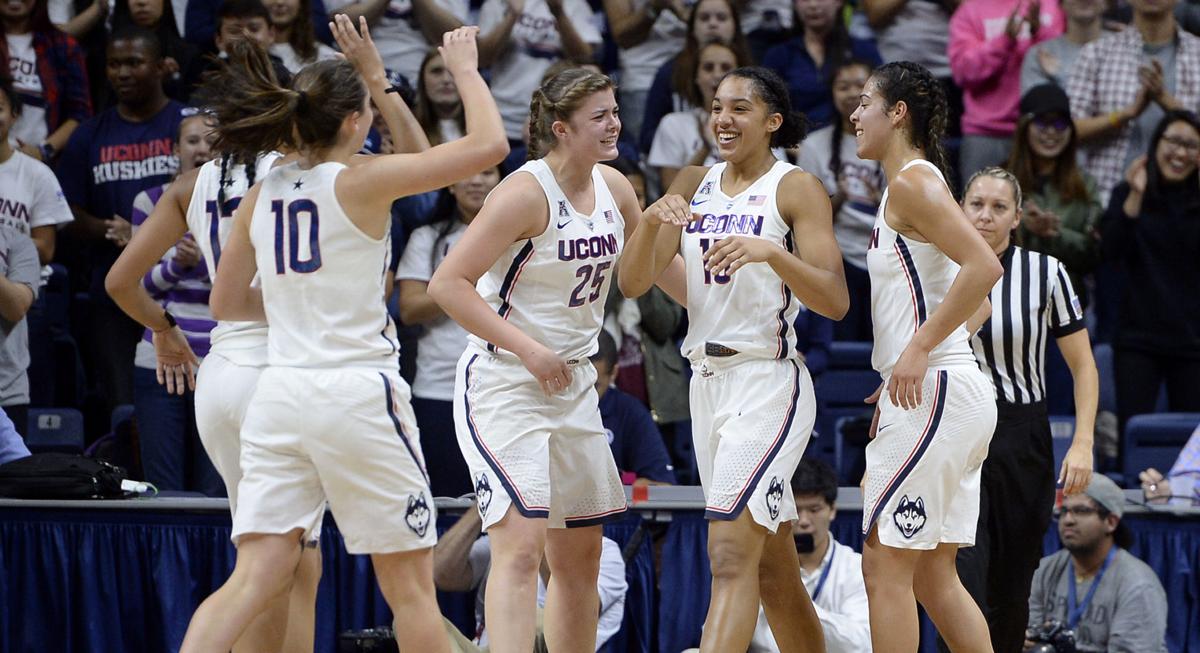 Connecticut's Gabby Williams (second from right) is greeted by her teammates after during a game earlier this season. The Huskies enter Wednesday's game at Nebraska riding an 85-game winning streak. 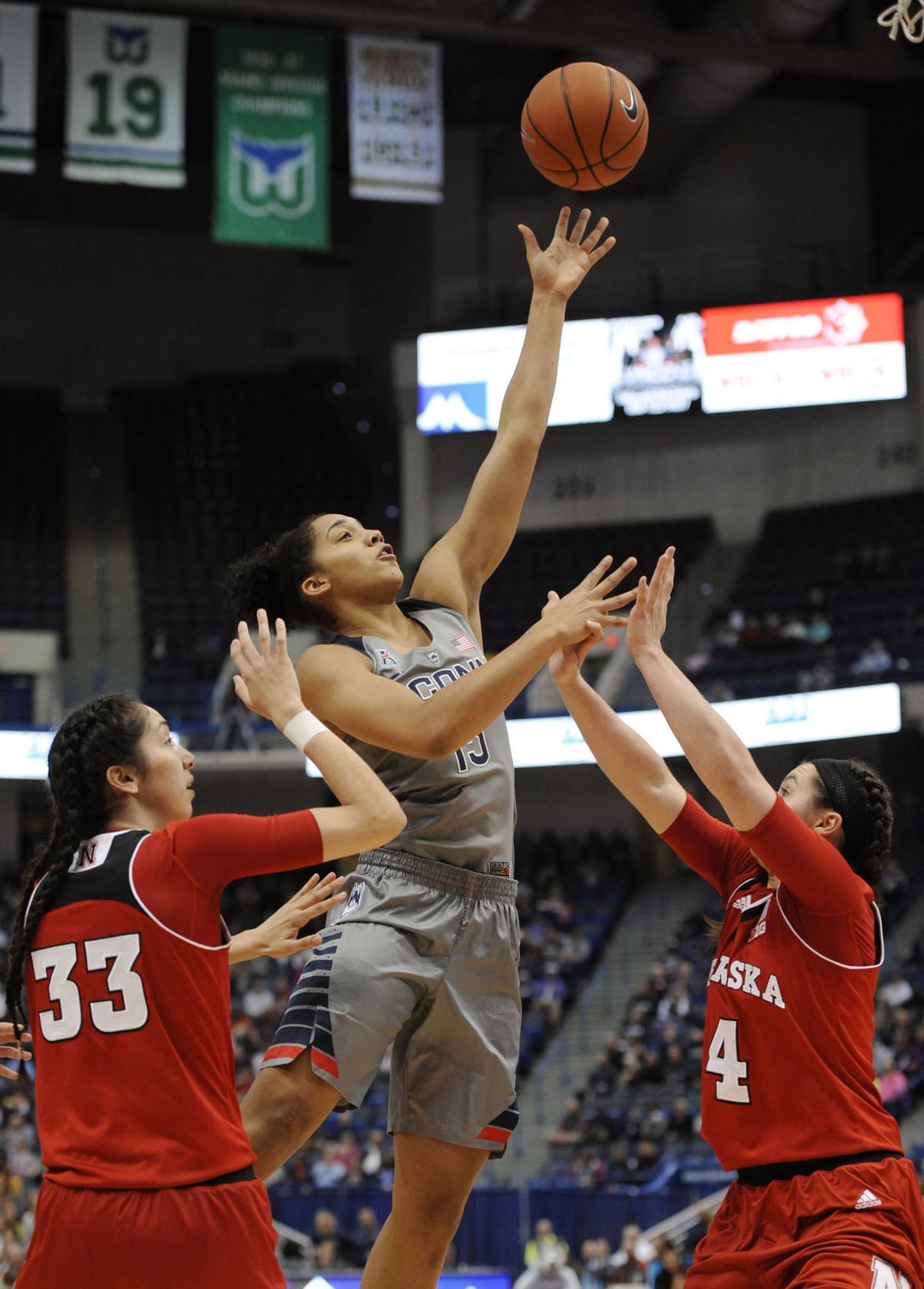 Connecticut’s Gabby Williams shoots over a pair of Nebraska defenders during the Huskies' 88-46 win against the Huskers in 2015.

The dominance of the Connecticut women’s basketball team has been well-documented over the years, but is worth revisiting with the top-ranked Huskies set to play Nebraska on Wednesday at Pinnacle Bank Arena.

Here are a few of the accomplishments of coach Geno Auriemma’s teams:

* The 11-time national champion Huskies are riding one of the most amazing stretches of success in basketball history with four consecutive NCAA championships. UConn has advanced to nine consecutive NCAA Final Fours among its 17 overall trips to the semifinals under Auriemma.

* The Huskies have won 85 straight games entering Wednesday, and 88 of their last 89.

* Since coming up short of winning the NCAA title in 2008, Auriemma has guided the Huskies to an astounding 308-12 record with six NCAA titles.

Over the years it has been debated whether the Huskies’ dominance of the sport is good for college women’s basketball, or if more parity and the best players being spread across more teams would be better.

Nebraska coach Amy Williams thinks what UConn has done is good for the sport.

“I just don’t see how anybody could think that it’s bad for women’s basketball,” Williams said. “I look at that and think they are proving and showing all of us the level that our game can be at and it’s a very impressive, high level of basketball, and to me that’s a positive thing for our sport to be able to watch women play this game at a very high level and it gives us all something to strive for.”

Despite losing the only four-time NCAA Tournament MVP in history, Breanna Stewart, and All-Americans Moriah Jefferson and Morgan Tuck, Connecticut has continued to roll this season. Connecticut is 10-0 and has won its last nine games by double digits. On Monday, Connecticut beat one of the best teams in the Big Ten Conference, Ohio State, by 19 points.

Nebraska (4-7), which comes into the game having lost six of its past seven games, has only one player averaging double figures, sophomore forward Jessica Shepard at 19.4 points per game.

Even compared with the other top-10 teams, Connecticut still does things that make it stand out, Williams said.

“I think the thing that really separates them is they’re the best passing team that I’ve seen,” Williams said. “They really share the basketball and they make the right read and the right pass every time. And the other thing that I think really separates them is they just make you pay every time that you make a mistake, and it doesn’t matter if it’s on the defensive end, if you have a defensive lapse, they’re going to make you pay for it, and if you offensively turn it over, it’s going to lead to points on the other end.”

Connecticut has only 12 players on the roster this season, under the NCAA scholarship limit of 15, but they’re all good.

“The one thing you can say about Connecticut and their recruiting is that they are selective,” Williams said. “They take the best of the best, but they find the right type of people and players as well. They’re kind of picky, which is why they keep a select roster.”

This is the second year of a two-year series with Connecticut that had the Nebraska play UConn in Hartford, Connecticut, last season. The series took shape after Connecticut played in Lincoln for the NCAA Tournament in 2014, and Auriemma was impressed with Pinnacle Bank Arena, the city of Lincoln and Nebraska fans.

Last season, Nebraska lost to UConn 88-46. The Huskers actually led 13-12 late in the first quarter, but were outscored 44-16 in the second and third quarters.

Senior center Allie Havers is one of seven players still on the team who played in that game against UConn last season.

“Going in last year, that was the team you looked up to as a kid and wanted to be on, and having the opportunity to play against them is amazing,” Havers said. “I remember last year we came in with a fight, and our minds were right, because if you walk into that game saying, ‘Oh, we’re playing the No. 1 team and we’re going to lose,’ then you’re going to lose.”

Bluejays cruise past Huskers behind a bevy of threes

OMAHA — Jessica Shepard likened Creighton's smashing victory over Nebraska team to a game within a game.

Huskies' win streak reaches 86 with rout of Huskers at PBA

The Nebraska women’s basketball team has now joined Baylor, Notre Dame, Texas, Syracuse, Temple and a whole lot of other teams on the other si…

Forward from Iowa commits to NU women's basketball team for 2018

Ashtyn Veerbeek got to deliver her good news in person to the Nebraska women’s basketball coaches Thursday morning.

On a few occasions in recent months Amy Williams has been welcomed back to the Big Ten Conference, which while polite, is not exactly accurate…

Connecticut's Gabby Williams (second from right) is greeted by her teammates after during a game earlier this season. The Huskies enter Wednesday's game at Nebraska riding an 85-game winning streak.

Connecticut’s Gabby Williams shoots over a pair of Nebraska defenders during the Huskies' 88-46 win against the Huskers in 2015.