When Nebraska had a player get injured during a game this past season, Love and Stuart went onto the floor and carried the Husker back to the bench, which often appeared on the TV broadcast.

That routine happened a lot this season — Isabelle Bourne, Ruby Porter and Trinity Brady each caught a ride at some point this season. You also can add Bella Cravens to the list of players injured during a game.

Brady started the season opener and went 3-for-3 from three-point territory. But she injured her ankle in the second game and never played again.

A few times, Nebraska played a game with only seven players before the roster situation improved during the second half of the season.

Coach Amy Williams doesn’t wonder how the season may have been different if the Huskers had fewer injuries. For the past 12 months, she told the players to control what can be controlled, and she tried to practice what she preached.

“I haven’t spent a lot of time lamenting over what could have been,” Williams said. “I’m proud of how our team handled each of those situations. I couldn’t have scripted it any better, Issie’s responses when we said, ‘Hey, we’re going to have to play you at the three (position),’ or ‘OK, we’re going to have to play most of your minutes at the four.’”

At times, Nebraska’s season felt more successful than the final result of a 13-13 record. The Huskers won one game apiece at the Big Ten Tournament and WNIT, giving Nebraska its first postseason tournament wins since 2018.

The season will be remembered partly for the Huskers’ four wins against ranked teams — No. 15 Ohio State, No. 23 Michigan State and Northwestern (twice). The Dec. 31 win against No. 15 Northwestern was the highest-ranked win of Williams’ career.

And those successes came during a season some said would be a rebuilding year after Nebraska lost five of its top seven scorers from the previous season.

The unexpected wins put Nebraska in a position to make the NCAA Tournament. But a few times, a big win was immediately followed by a disappointing loss.

Overall, Nebraska lost four games against teams that finished below it in the standings. If Nebraska wins a few of those games, and beats another ranked team, maybe they get an NCAA bid.

Nebraska finished in ninth place in the Big Ten, coming in a league that advanced a record four teams to this weekend's NCAA Sweet 16. Nebraska was ranked 72nd nationally in the final NET (NCAA Evaluation Tool) rankings.

Williams considers the season a success.

“In a lot of ways I think we were able to move forward as a program, so that for me is a success,” she said. “Obviously we had some goals that went unaccomplished, but I do think that overall we feel like we navigated a lot this season and did it pretty well with class and found ways to grow as a group.”

One of the big decisions for the program in the offseason will be whether Kate Cain, a 6-foot-5 center and four-year starter, will return next season. She’s a senior but could play one more season due to the NCAA eligibility waiver for this season. Or she could try professional basketball.

“We’re still kind of waiting for that decision to be made for sure,” Williams said. “We’re giving her a little time to navigate that with her parents and come to a conclusion. We wanted to give her time to decompress after the season and process everything and really weigh out the pros and cons on both sides of that.”

During this season, Williams believes a culture of hard work was established that will pay off in the future. Also, the players saw that when their play lacked consistency, especially on defense and rebounding, they usually lost.

At the Big Ten Tournament, Nebraska avenged two previous losses against Minnesota, and Nebraska's 10-point loss against No. 7 Maryland was closer than most teams played the Terrapins this season.

Bourne believes Nebraska’s game against Maryland is a sign of the potential for next season.

“It’s really exciting for the whole team,” Bourne said. “I think whether Kate comes back or not, but the rest of us we’re really excited about going into next season and kind of giving everyone in the Big Ten a run for their money.”

"I have watched him establish himself as one of the most well-rounded and respected coaches in women’s basketball."

NU women's hoops notes: What Amy Williams says is 'unique' about her roster in the transfer portal era; scheduling notes and freshman impressions

The Huskers began summer practice this week, and did so without having a player leave the program to transfer to a new team in the three months since last season ended. 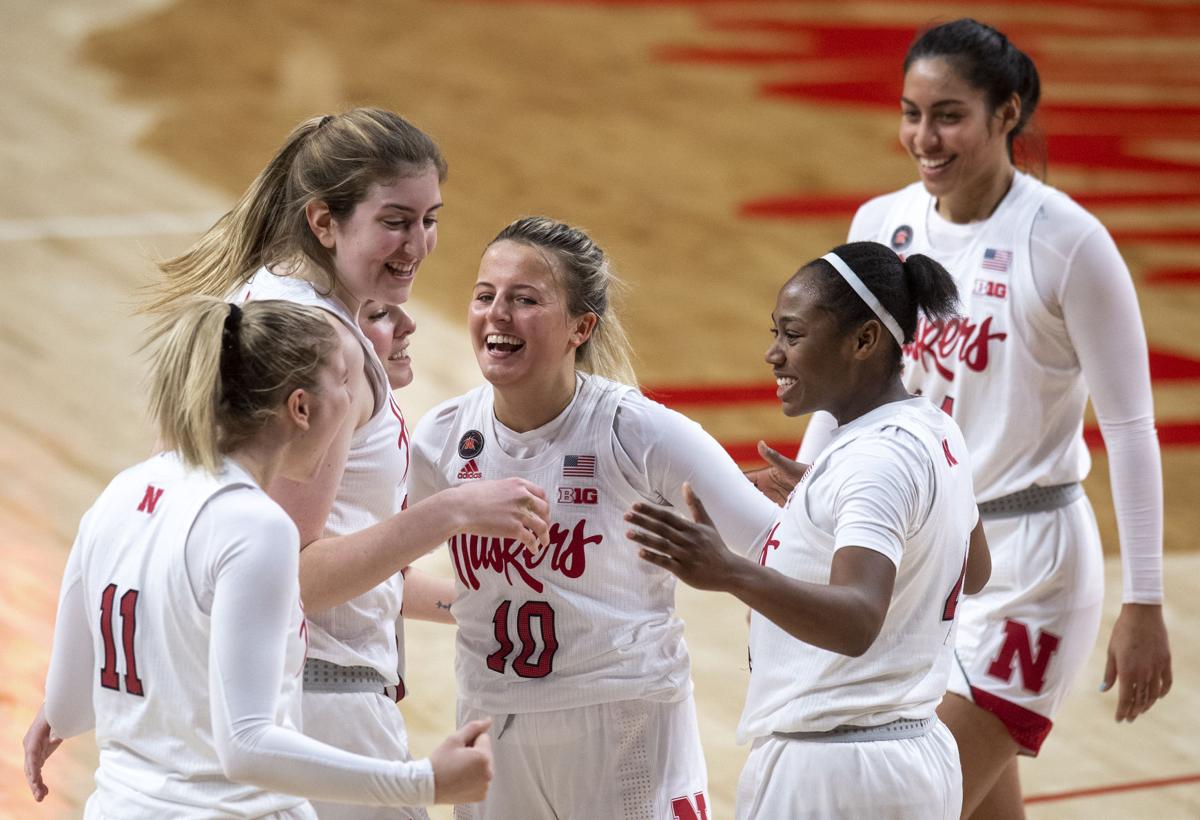 The Huskers are all smiles after defeating No. 15 Ohio State 63-55 on Jan. 16 at Pinnacle Bank Arena. In total, Nebraska defeated four ranked teams this past season. 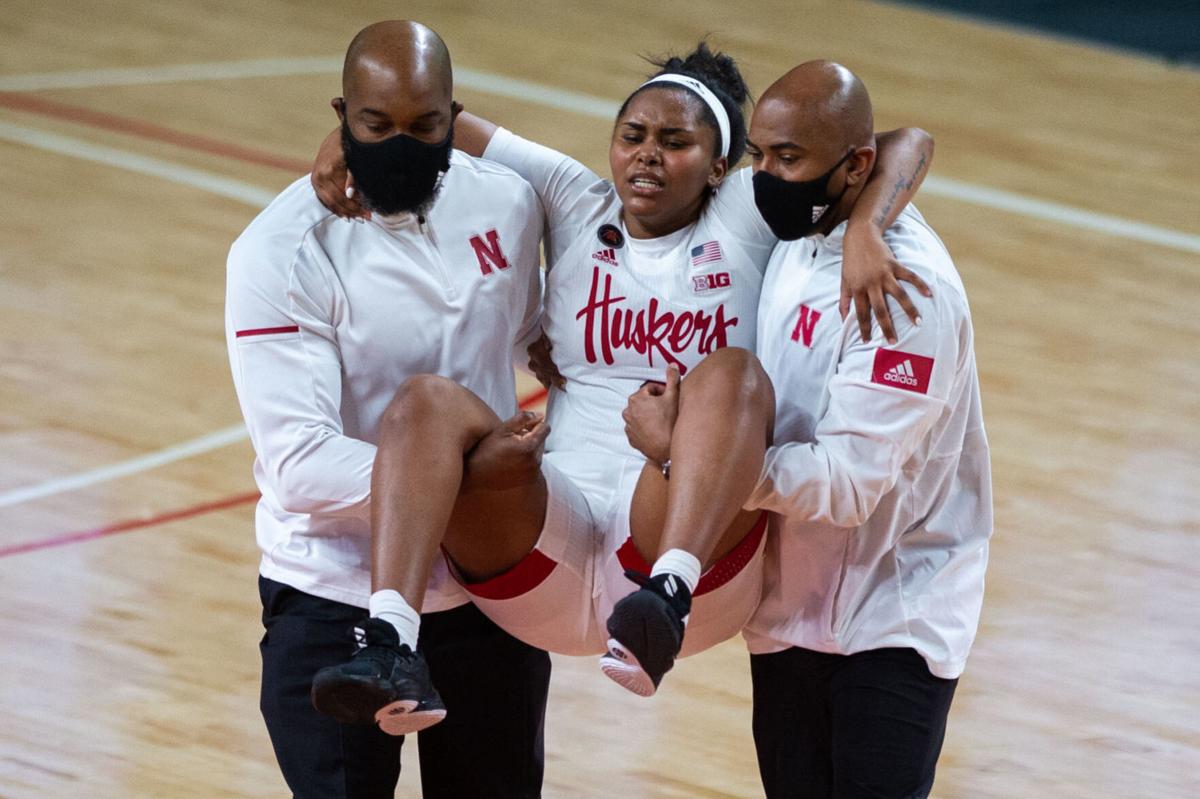 Nebraska's Trinity Brady is carried off the court after suffering an injury in the fourth quarter against Idaho State on Dec. 6, 2020, at Pinnacle Bank Arena.