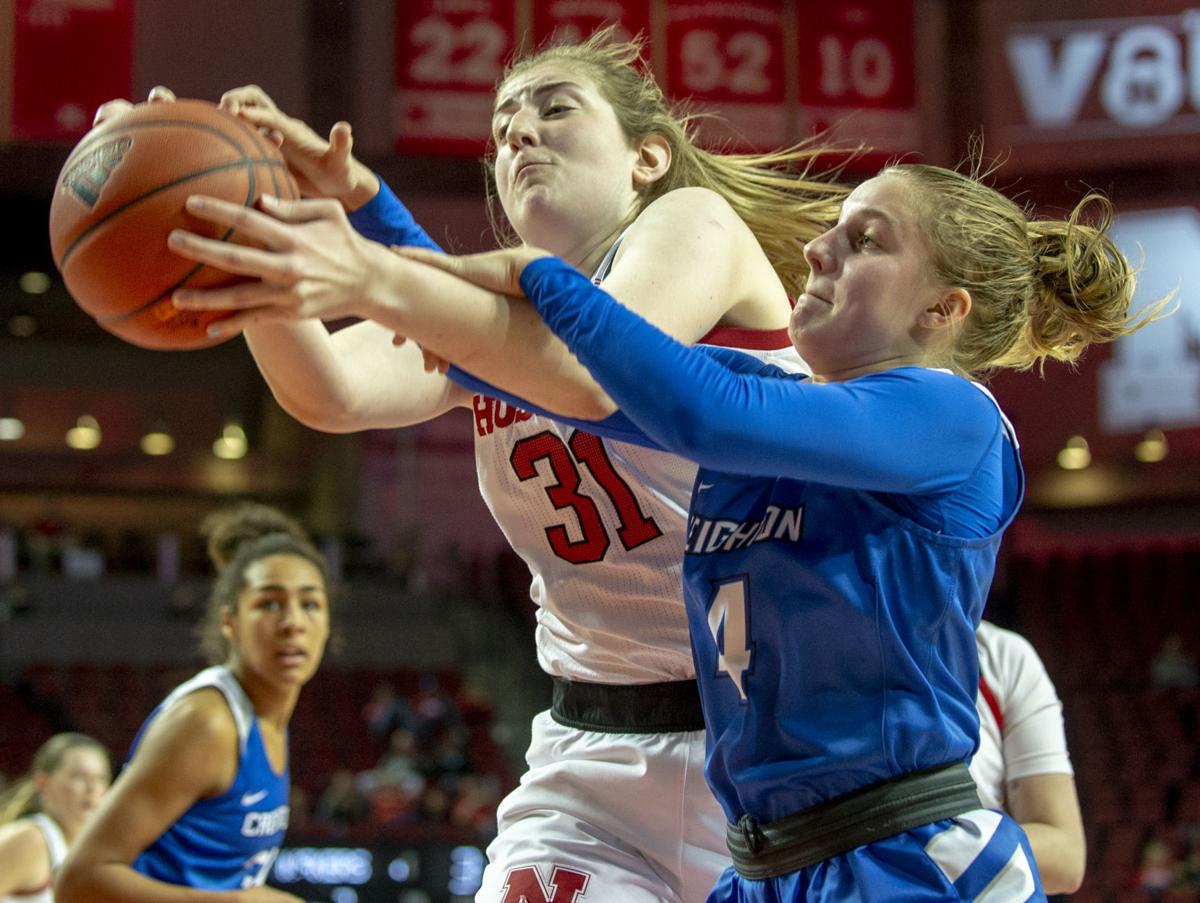 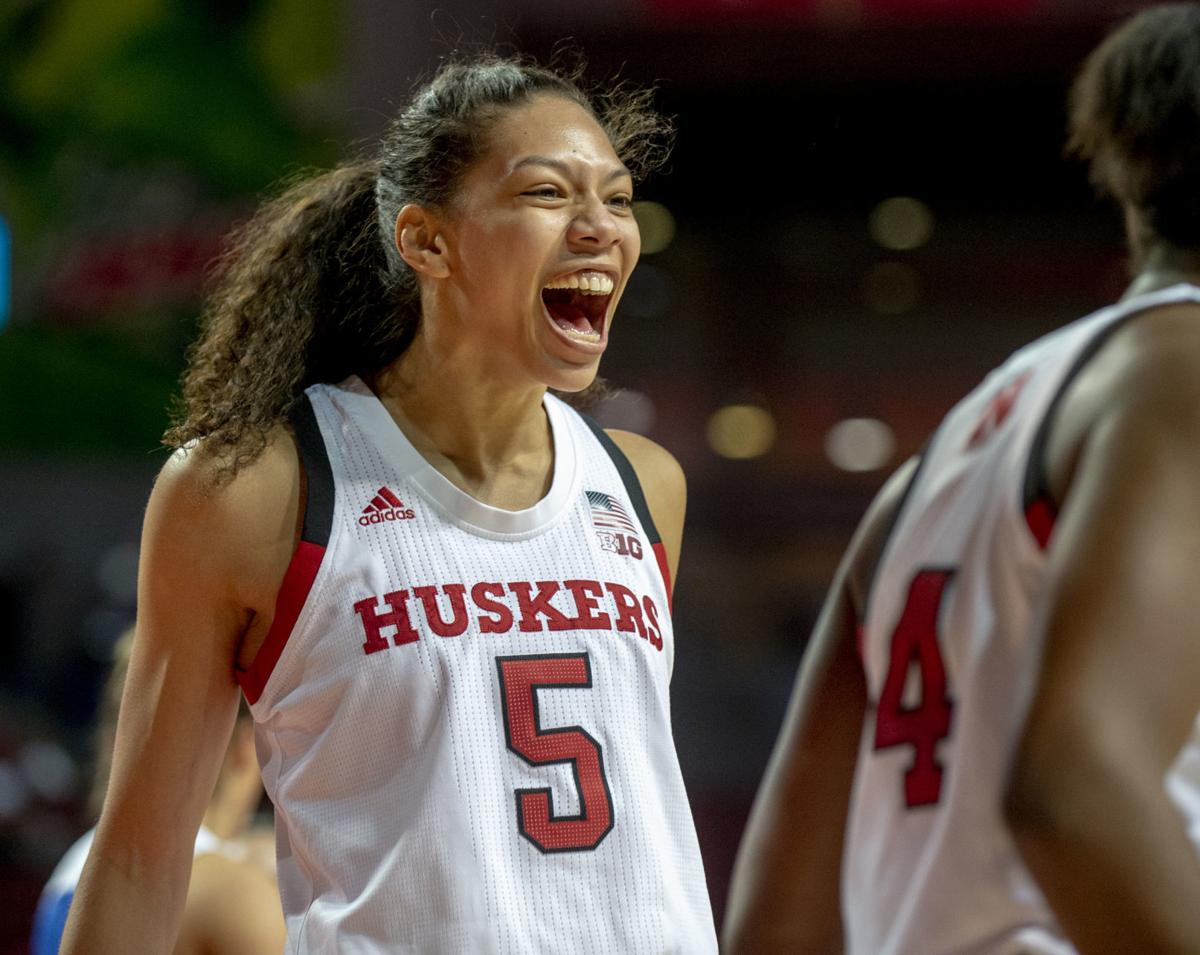 The Creighton players said “blue state” when they walked off the court after another win in the Nebraska-Creighton women’s basketball series on Sunday.

It was thanks to some impressive three-point shooting that proved the once-a-year rivalry game is staying that way in this sport for another year.

Creighton made a season-best 14 three-pointers in a 79-74 win against the Huskers in front of 3,967 fans at Pinnacle Bank Arena. The win ended Nebraska’s 5-0 start to the season. Creighton (4-1) has beaten Nebraska each of the last four years.

Creighton coach Jim Flanery says it’s easy to say that the game against Nebraska means a lot to the players but probably hard to really gauge. And this year there are only two players from Nebraska playing for the Jays. But during the nonconference season, there is only one team you know you’re going to play every year, and for Creighton that’s Nebraska.

“I think there is a certain pride in trying to our best when we play them,” Flanery said.

“You want to beat the team that’s in your state, even if you’re from out of state,” said Nebraska’s Sam Haiby, who is from Minnesota. “And we definitely wanted this one for our seniors most. So it really hurts us, and them, obviously, that they won’t get another shot at it.”

Creighton knew Nebraska’s taller lineup would be tough to score on inside, and that the Jays would have to shoot threes.

“It was two very different teams,” Flanery said. “You saw the size difference, so we knew it was going to be a rough-go to score in the paint and at the rim, and it was. But obviously when you make 14 threes you give yourself a chance.”

Creighton will probably shoot a lot threes this season. The Jays came into the game averaging nine threes per game.

“We have a hard time recruiting the post players that (Nebraska) is able to recruit, so we’re not ever going to be as big and physical. We shoot a lot of threes,” Flanery said. “We knew we were going to have to squeeze a lot of them. And fortunately we shot them well.”

Nebraska was prepared that Creighton would shoot a lot of threes.

“First, credit to them shooting that well,” Haiby said. “Fourteen threes is going to be hard to come back from, no matter who they are. It was a lot of catch and shoot, so we knew that going into the game so we need to execute our game plan better and run them off the line. Whether it makes them shoot a layup, or step-back threes.”

Creighton was also good from the free-throw line, making 23-of-29.

Nebraska accomplished its goal of scoring inside. Kate Cain led the Huskers with 18 points on 9-of-15 shooting. Haiby kept driving to the basket, and scored 17. Nebraska outscored Creighton 46-10 in the paint.

“It’s a tough loss here at home. It’s really tough for us to swallow,” said Nebraska coach Amy Williams. “We got outscored 42-9 (on three-pointers) and that’s a really tough thing to overcome.”

Nebraska guard Taylor Kissinger played for the first time since the first game after being held out to do concessions symptoms. She was scoreless in 13 minutes.

Nebraska’s Hannah Whitish has a narrow focus going into the Huskers’ game against Creighton on Sunday. She’s a senior, and she’s never been on a team that's beaten Creighton in three attempts.

'It was a really special evening': Nebraska women improve to 5-0 on night Whitish reaches milestone

Leigha Brown led three players in double-figure scoring as the Nebraska women’s basketball cruised to a 73-39 win against Southern on Wednesday, marking the team's first 5-0 start since the 2014 season.

Allison Weidner grew up in a small town with a big dream of playing basketball for the Big Red.

For Nebraska women's basketball, the expectation is to play so hard that you have to refill the gas tank

For the Nebraska women’s basketball team, even the best players are going to spend a decent amount of time on the bench.

This week the Nebraska women’s basketball team went to work in practice on some of the things that did cause them to lose a game, instead of j…

A closer look at the Nebraska women's basketball team's matchup against USC.

Hannah Whitish had a quiet start to Friday's game against USC.

The Nebraska women started the game with an 8-0 run, including back-to-back three-pointers by Hannah Whitish, and the Huskers cruised to a 72-…

A closer look at the Nebraska women's basketball team's matchup against Duke.

'This is a very good win': Kissinger catches fire from three-point range to lead Huskers past Duke

Taylor Kissinger reeled off six three-pointers to match a career-high and NU fended off Duke down the stretch to claim a legitimate victory.

Take a look at how the Huskers and Golden Eagles compare ahead of Saturday's matchup.