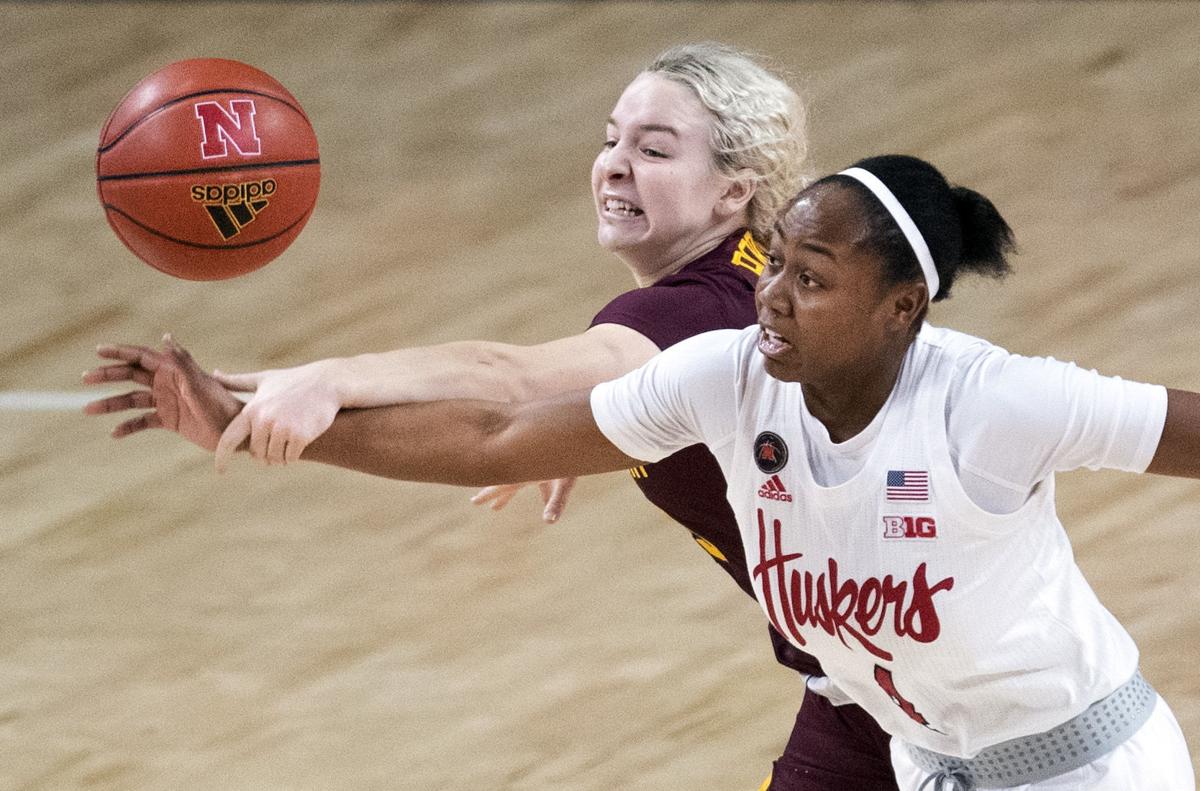 Nebraska's Sam Haiby (right) battles for possession with Minnesota's Katie Borowicz in the first half Tuesday at Pinnacle Bank Arena. 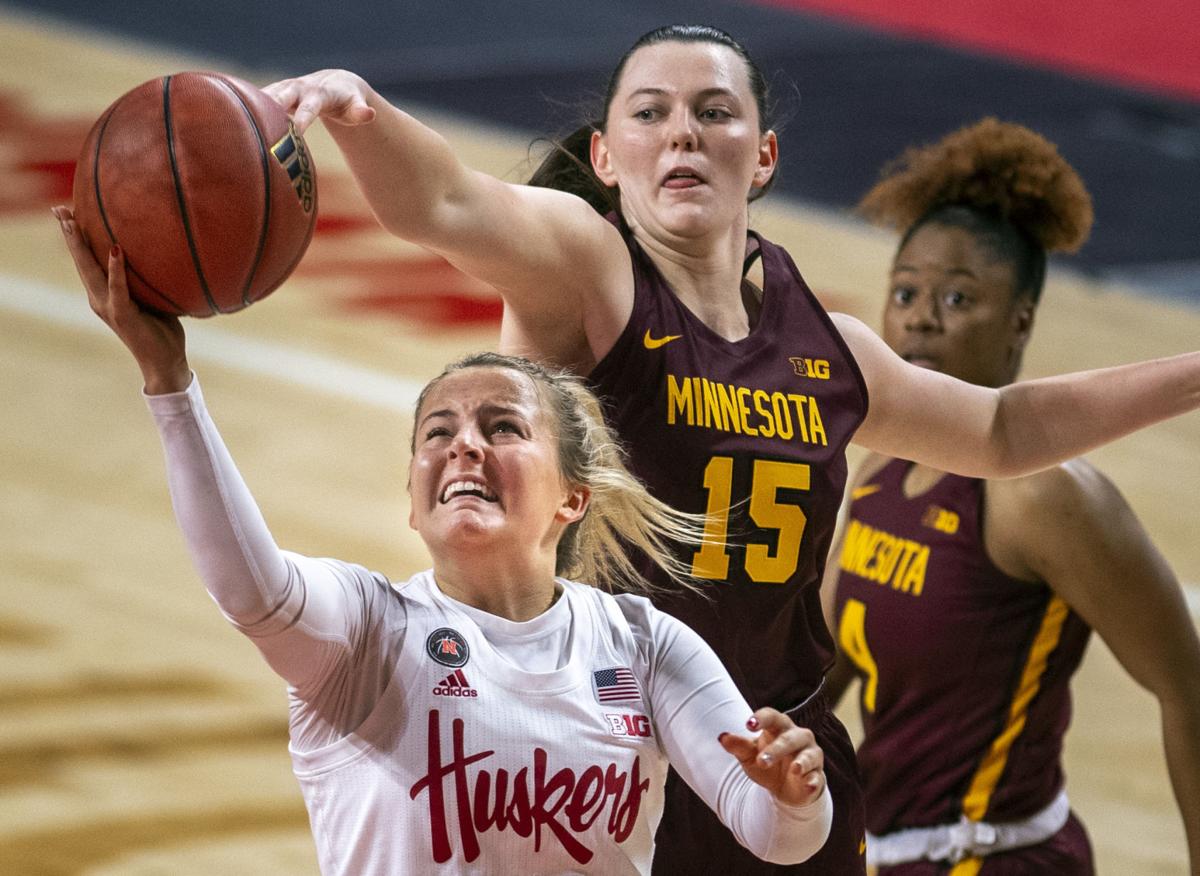 Here’s the latest thing we’ve learned about what it’s like playing a college basketball season during a pandemic, and that it took us until the 12th game to learn it tells you that the season has been going pretty well for the Nebraska women's team.

When the road team wins during a game that no fans are allowed to attend, it’s one of the quietest things you’ll experience at a sporting event. After the game ends, the teams wave to each other from their benches. The music and simulated crowd noise in the arena stops playing, and 60 seconds after the game ends, the court is clear and it’s as though the contest hadn’t just been played.

That was the scene for the first time this season at a Nebraska game, after Minnesota beat the Huskers 76-71 Tuesday at Pinnacle Bank Arena. Nebraska hadn’t lost at home in the first six weeks of the season, winning all six games.

The Gophers had only one fan in their section reserved for families of the players and staff, and the players yelled to him as they headed to the locker room. Nebraska had about 30 people in its section.

Minnesota (3-7, 2-6 Big Ten) has had lineup struggles for COVID-19 reasons, and ended a three-game losing streak.

It was a disappointing loss for Nebraska (7-5, 5-4 Big Ten) against a team in the bottom half of the league standings just a few days after the Huskers upset 15th-ranked Ohio State.

“I’m obviously disappointed that we had our first loss at home,” said Nebraska coach Amy Williams. “We’ve been trying to make a special effort to protect home court and we’ve been really good here. It’s a tough loss.”

The Gophers did a lot of their work beyond the arc, making 15 threes, which was four more than its previous season-high. Six Gophers made threes. Gadiva Hubbard was 5-for-9 on threes. Sara Scalia made four of them.

The 15th three, made by Hubbard with 49 seconds remaining, broke a tie at 68 and gave the Gophers the lead for good. Hubbard led Minnesota with 18 points.

Sam Haiby made a three for Nebraska with 2 seconds left, but the Gophers made two free throws after that to finish off the win.

Nebraska led for 32 of the 40 minutes. But making all of those threes allowed the Gophers to keep it close before the knockout blow with, naturally, a three-pointer.

“I thought we got some great shots in the fourth quarter, but we were 3-for-21 and couldn’t find a way to put the ball in the basket down the stretch,” Williams said.

Nebraska had a stretch of about four minutes in the fourth quarter when it didn’t score, and the Gophers went on an 8-0 run in that stretch to take the lead. Nebraska tied the game once after that but never fully recovered.

With starting forward Isabelle Bourne still out with an ankle injury, Nebraska only had seven players in uniform. Six Huskers logged at least 25 minutes.

But Williams doesn’t think you can say the Huskers lost only because they were tired in the fourth quarter.

“One of the reasons why I don’t want to use the excuse of tired legs is because I’m watching us chase down offensive rebounds and making hustle plays and getting great shots,” Williams said. “I feel like the effort and energy was still there. Sometimes that happens. Sometimes the ball is going to rim out and you have to be able to hang your hat on defense and rebounding. There were just a few stretches where we let up in that area, and I think that’s probably what sealed the deal.”

Haiby led the Huskers with 25 points and tied her career-high with 12 rebounds. Ashley Scoggin added 16 points with four three-pointers.

Nebraska outrebounded the Gophers 42-40. But Minnesota did get 14 offensive rebounds, and scored 14 second-chance points.

After Nebraska led by 10 points to start the game, Minnesota began to make a move in the second quarter when it scored 12 points following offensive rebounds.

“We’ve talked about it that when you give up offensive rebounds, the other team kind of turns into the shark in bloody waters and they start to get a taste of that and they keep coming,” Williams said. 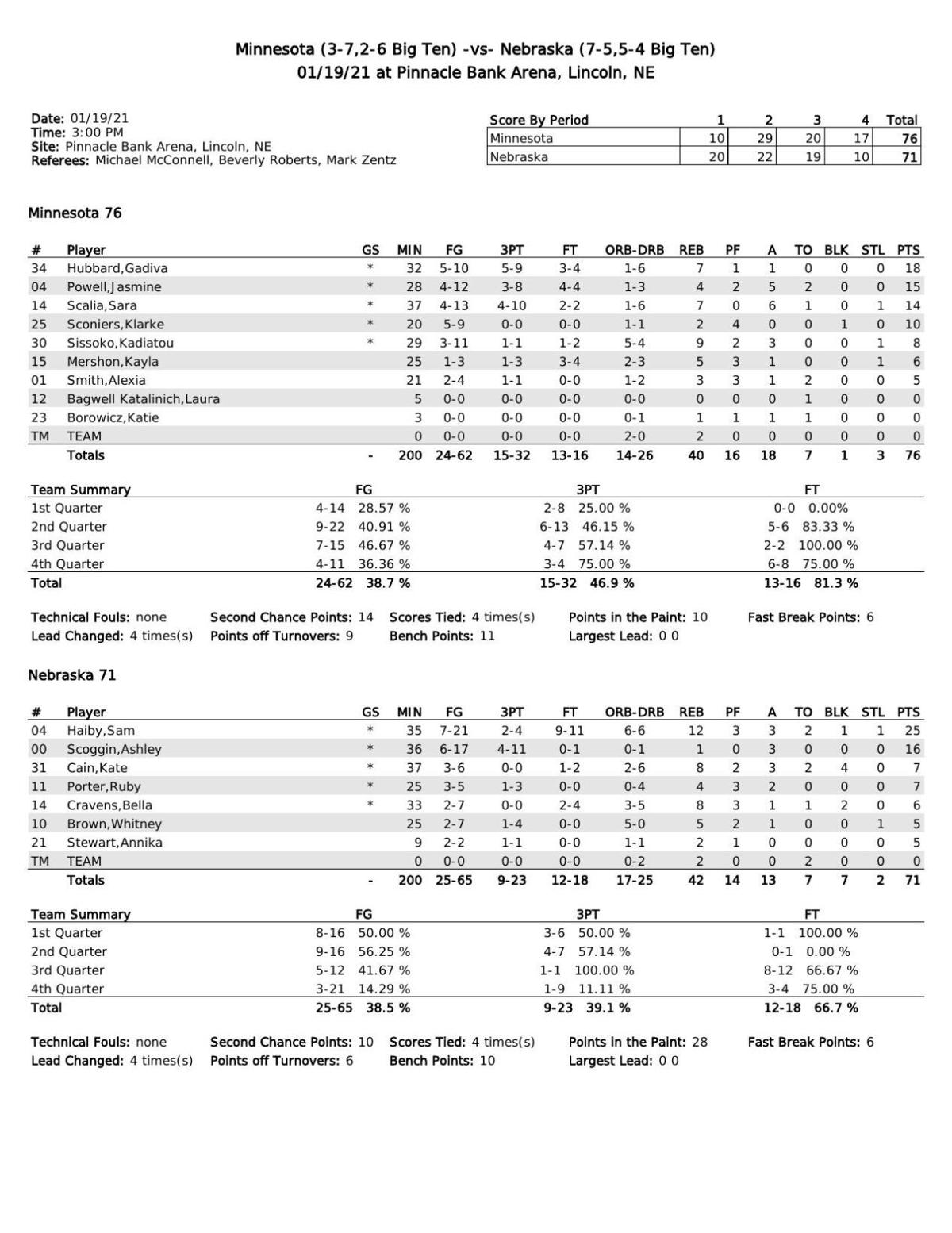 Texas last week hired what is believed to be the first $1 million-a-year special-teams coach. It's about emphasis.

Nebraska's Sam Haiby (right) battles for possession with Minnesota's Katie Borowicz in the first half Tuesday at Pinnacle Bank Arena.