'One of the most exciting players in the 2021 class': Kendall Coley highlights five-player signing class for Nebraska women
0 Comments
Share this
{{featured_button_text}}
1 of 2 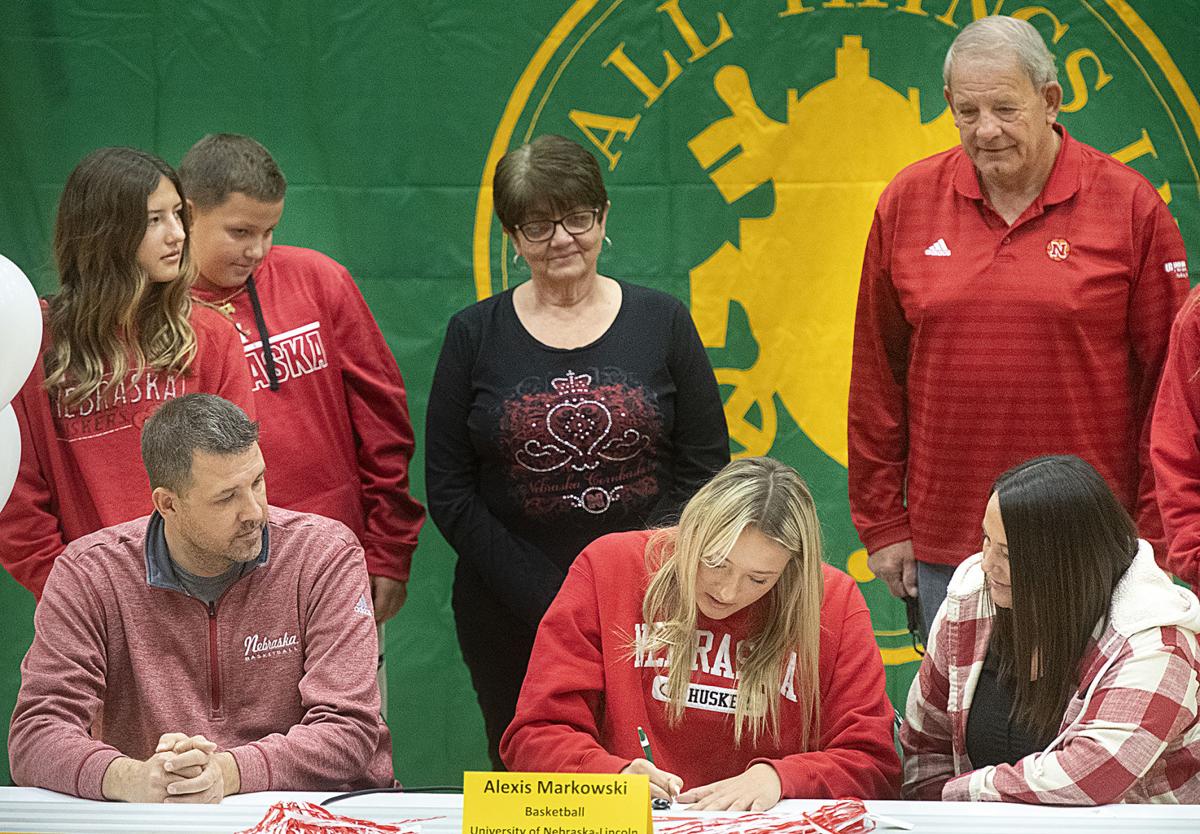 Alexis Markowski is surrounded by her family, including dad Andy, sister Ava, brother Jake, grandma Barb, grandpa Paul, sister Adison (not pictured) and mom Jaime, as she signs a letter of intent to play basketball at Nebraska on at Lincoln Pius X High School. 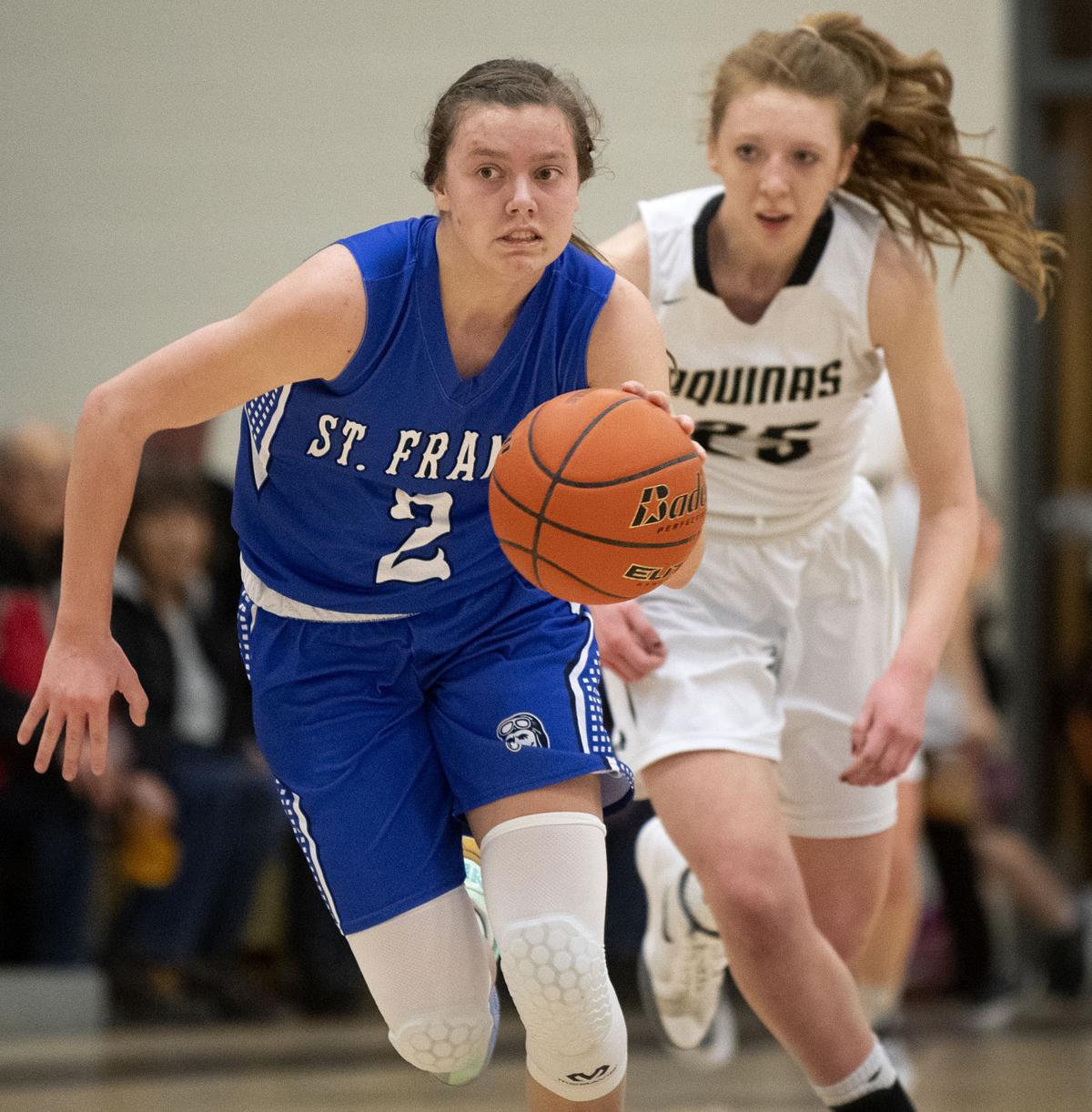 Humphrey St. Francis' Allison Weidner brings the ball up the court after a steal from Aquinas' Madison Jelinek in February 2020.

Kendall Coley, a 6-foot-2 forward from Minneapolis, headlines the class. She’s ranked No. 49 by ESPN. Allison Weidner, a star from Humphrey St. Francis, is ranked 80th.

Prior to signing day, Nebraska’s class was ranked 21st nationally in the ESPN rankings.

Four members of the Nebraska's class have been ranked in the top 100 in the country by at least one ranking service.

"This 2021 recruiting class is a special group that has already been building great bonds with each other," Nebraska coach Amy Williams said in a news release. "We know that they are a group that can make an incredible impact on our program and the goals we have to become Big Ten champions."

Here is a closer look at each player:

Of note: She’s ranked as high as No. 36 by one recruiting service (All-Star Girls Report). Coley averaged 15.5 points, 7.4 rebounds and 3.7 assists as a junior at St. Louis Park. She’s a close friend of Kennedi Orr, the No. 1 volleyball recruit in the nation who signed with the Nebraska volleyball team Wednesday. Coley’s finalists were Nebraska and Washington.

Williams says: "Kendall is one of the most exciting players in the 2021 class. She is very versatile and can play every position on the court. She is long, athletic and skilled, which is a devastating combination. She is a special talent, and we believe she can make a great impact in the Big Ten conference."

Of note: She’s ranked the No. 80 recruit in the country by ESPN. As a junior, she averaged 25 points, six rebounds, six assists and seven steals per game in leading St. Francis to a Class D-2 state runner-up finish, and earned first-team Super-State honors.

Williams says: "We cannot wait to add Allison to our Husker program. She is a crafty point guard who can score at all three levels and is very good in the open court. She has great court vision and makes those around her better.”

🏀 It's official! @allison_weidner is signed to join @HuskersWBB!
Congrats to Allison, we can't wait to watch you do big things at the next level! (But not yet, there is some unfinished business to handle first 🥇🏆)#goflyers 💙 pic.twitter.com/boBHpQIQvG

Of note: She switched her commitment from South Dakota State to Nebraska in August. Markowski earned first-team Super-State honors from the Journal Star as a junior while leading Lincoln Pius X to the Class A state championship. She set school single-season records for points (560) and rebounds (315). Markowski tied the Class A tournament scoring record with 80 points in three games.

Williams says: "She had an incredible junior season capped off by a state championship and is poised for a great senior year. All summer she played against some of the best post players in the country and continued to shine. She is a winner who just keeps working to expand her game, and her skills align perfectly with our needs."

Of note: She’s ranked as the No. 74 recruit in the class by Prospects Nation. She led her high school team to a No. 1 ranking in Illinois and a No. 23 ranking nationally at one point as a junior. She made 43% of her three-pointers while also leading Benet Academy in steals as a junior.

Williams says: "Kendall was our first commit in the 2021 class, and she fits perfectly into all aspects of our program. She is a long, tough, gritty player with great versatility. She is a talented scorer, but her willingness to do all the dirty work on the court is what separates her.”

Of note: Popa comes to Nebraska as a four-star recruit before entering her senior season at Brewster Academy. She played her junior year at Parkersburg High School in West Virginia. Popa's father, Constantin, was a second-round NBA Draft choice of the Clippers in 1995 after playing college ball at Miami.

Williams says: "She knows how to use her length to her advantage on defense and has expanded her versatility on offense. She is working hard to add strength to her frame and understands the benefits that Husker Power will provide her in that area. The sky is the limit for her growth, and we can't wait to watch it happen here at Nebraska."

Many of the state's top athletes put pen to paper Wednesday, sealing their college plans.

'This is a special day': Eight Papillion-La Vista softball players sign on for their next dance

"It's kind of crazy to see all my fellow seniors sign," said Mia Jarecki, a three-time first-team Super-State infielder. "You could tell we wanted it, and we worked so hard for it."

The Nebraska wrestling team inked a pair of Pennsylvania standouts in Jagger Condomitti (Northampton) and Lenny Pinto (Stroudsburg) on Wednesday.

What we know, what we don't: Breaking down the Nebraska women's basketball team's storylines

Nebraska women's basketball team now has games on its calendar

Nebraska is scheduled to begin the Big Ten season on Dec. 10 when the Huskers host Illinois, part of a 20-game league slate.

There’s just five returning Huskers this season. Total. But each made significant contributions to help lift the the team to a win in its season opener.

The Huskers' all-time leader in blocked shots cherished her time in Lincoln, but, "I’m just excited to move on and take this next step in my life.”

Alexis Markowski is surrounded by her family, including dad Andy, sister Ava, brother Jake, grandma Barb, grandpa Paul, sister Adison (not pictured) and mom Jaime, as she signs a letter of intent to play basketball at Nebraska on at Lincoln Pius X High School.

Humphrey St. Francis' Allison Weidner brings the ball up the court after a steal from Aquinas' Madison Jelinek in February 2020.