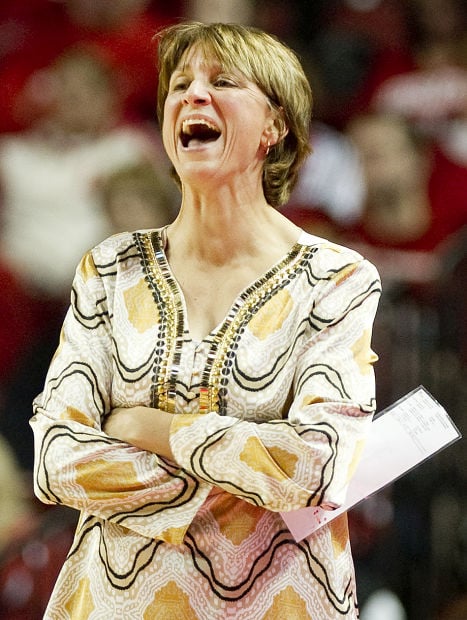 Nebraska head coach Connie Yori instructs her team against Northwestern in the first half on Jan. 2, 2014, at Pinnacle Bank Arena. 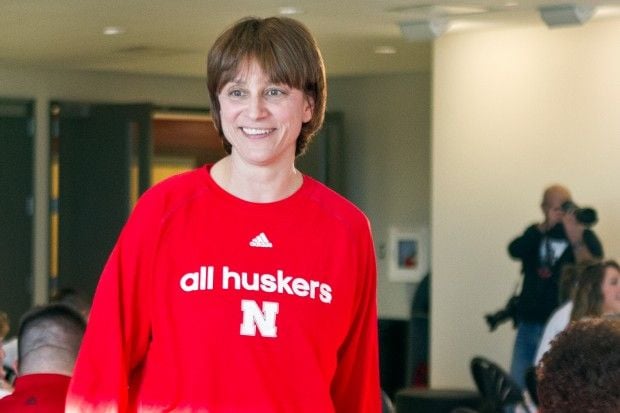 Nebraska women's basketball coach Connie Yori's team will be headed to College Station, Texas, on Saturday to play Tennessee-Chattanooga in the NCAA Tournament.

That’s usually better than having just one or two, but coach Connie Yori reminds that the one starter missing is a pretty significant one: Big Ten Conference player of the year Jordan Hooper.

“Right now the elephant — the big things — are a little scary,” Yori said Wednesday. “Can we score on a consistent basis, and can we get defensive rebounds? Those are scary, because you think, who did we lose? We lost one of the best scorers of all time in the history of this program, and one of the best defensive rebounders of all time. Those are big things. Those are areas right now where we’re not very good.”

From there, things get a little more interesting. Nine of NU's 14 players are in their first or second year in the program.

“A new word I’ve got to learn is patience,” Yori said. “We are super-duper young. We’re really, really young. People say we have four starters back, but then what? Who else do we have back that has much experience? We don’t have a lot after that. Brandi Jeffery and Allie Havers have some.”

Cady said the returning players are going to have to work hard to make up for the 20 points Hooper averaged per game.

“It’s going to be a group effort,” Cady said. “We’re going to need everyone to crash the boards hard, because Hoop got 10-plus boards a game, every game, and she scored an outrageous amount of points. I think it’s going to be a team effort to pick up what she left.”

Last year, Nebraska went 26-7, won the Big Ten Tournament and advanced to the second round of the NCAA Tournament. The Huskers finished No. 13 in the final AP poll.

To start this season, the team has been practicing longer than last year, usually going about three hours each day. The first 45 minutes have just been for the younger players.

Yori said the fifth starter could change throughout the season, depending on the opponent.

“I think it could vary from game to game, segment to segment of the season based on what our needs are, who we’re playing, who is playing well,” Yori said. “Do we need to go big? Do we need to go small? All that stuff.”

The freshmen include one of the nation’s top point guards, Natalie Romeo from California, and two-time Tennessee Class 2-AA player of the year Jasmine Cincore. The class also has all-Washington guard Chandler Smith and Kansas player of the year Kaylee Page. Smith has stood out among the newcomers, Yori said, because she’s been the most consistent.

It’s the highest-ranked recruiting class in program history, and all the new players have been good for competition.

“Other than our four starters that are returning, after that, it’s a free-for-all,” Yori said. “You've got 10 other kids that are fighting for three to five spots, so the competition, I think, is going to be really great within our own team.”

In the 30-second commercial, Yori shows off the Big Ten Tournament trophy and doesn't let Miles hold it.

Initially, Yori was not thrilled with the idea.

“It was nice that Tim was willing to do it,” she said. “It was for our program, and he definitely took one for the team there.

“Hollywood has not called yet, let’s just put it that way.”

They didn't make a huge deal of it, but the Nebraska women’s basketball players received their rings for winning the Big Ten Tournament championship last season when practice began last week.

Nebraska head coach Connie Yori instructs her team against Northwestern in the first half on Jan. 2, 2014, at Pinnacle Bank Arena.

Nebraska women's basketball coach Connie Yori's team will be headed to College Station, Texas, on Saturday to play Tennessee-Chattanooga in the NCAA Tournament.