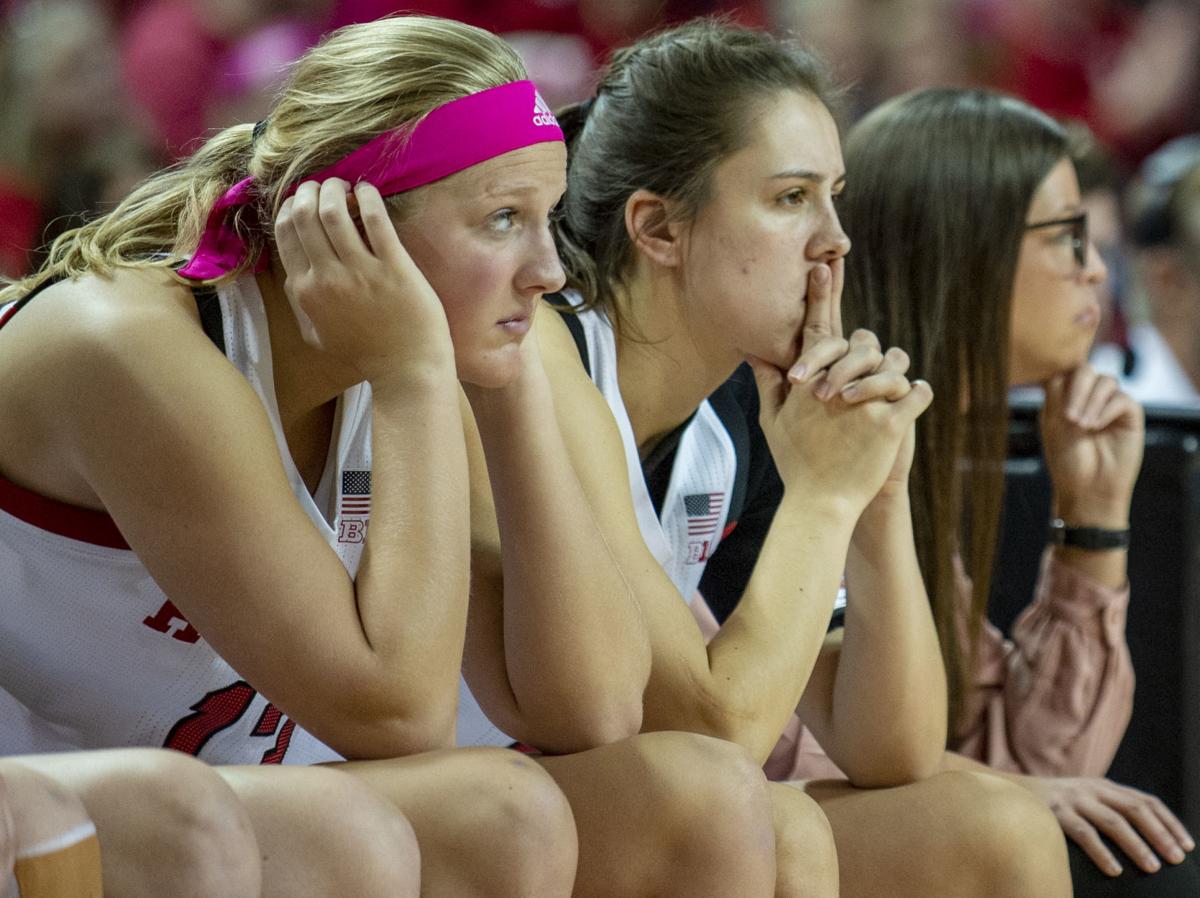 Nebraska’s Ashtyn Veerbeek (left) and Grace Mitchell (center) shown on the bench as the Huskers trailed by four points with a second left in a game against Indiana on Feb. 9 at Pinnacle Bank Arena. 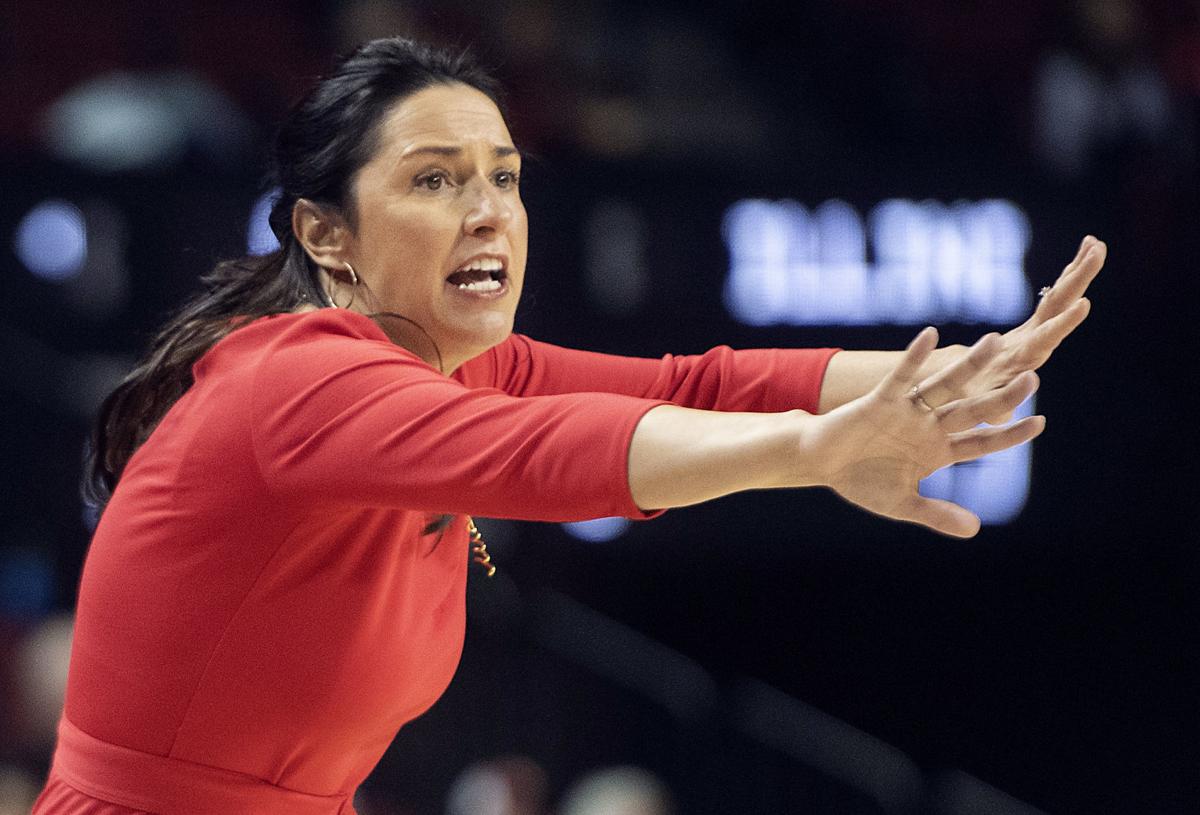 Nebraska women's basketball head coach Amy Williams instructs the players during the second half against Illinois in February at Pinnacle Bank Arena.

The Nebraska women’s basketball team improved its record by three games this past season, going from 14 wins in 2018-19 to 17, but for several months, it looked like the season would be better than that.

Nebraska built up a lot of confidence with a 10-1 record during nonconference play. Its nonconference schedule was not overly challenging, so it was still wait-and-see time for Nebraska fans.

After a good start to Big Ten play, with NU winning three of its first four league games, it looked like the Huskers might be as good as its nonconference record indicated. For several weeks, the Huskers were in ESPN’s projections to make the NCAA Tournament.

Another domino fell into the transfer portal from the Husker women's team, this time in the shape of the leading scorer from the past season.

But Nebraska couldn’t keep it up and struggled in the second half of the Big Ten season, including a stretch in which it lost five of six games.

So the Huskers finished the season with a 17-13 record, including a 10th-place finish in the Big Ten with a 7-11 record. Coach Amy Williams’ teams have finished 11th, third, sixth and 10th in the league. Nebraska finished ranked No. 89 in the RPI.

The Huskers' last game was an 81-75 loss to Michigan on March 5 in their first game at the Big Ten Tournament.

Nebraska likely would have made a return to the postseason to play in the WNIT, but the season was canceled before the teams were selected.

The four weeks since Nebraska’s last game hasn’t been good for the program, either. First, the postseason ended before it started due to the coronavirus pandemic.

And three players have made plans to transfer after this semester, including Leigha Brown, who led the Huskers in scoring this season at 14.4 points per game. Brown told Williams on Thursday that she was leaving the program.

Last week, Ashtyn Veerbeek and Kayla Mershon made plans to transfer. Veerbeek will play at Dordt, an NAIA program in her hometown of Sioux Center, Iowa. Mershon plans to play for Minnesota.

Brown, Veerbeek and Mershon were each part of Williams’ second full recruiting class at Nebraska, leaving Sam Haiby as the only player remaining from that class.

Almost all of the players have returned to their hometowns and are taking classes online. That includes Isabelle Bourne, who returned to Australia with her sister, Callie, who is on the basketball team at Idaho State. They had to go into self-isolation for two weeks because of their international travel.

How successful did Williams think Nebraska’s season was?

“We certainly wished we would have finished a little stronger,” said Williams to the Journal Star last week. “We thought we had a really great start with a 10-1 nonconference record, and had some pretty big wins, like Duke at home, and USC on a neutral site.”

When the season shifted to the league schedule, what did the Big Ten teams expose in the Huskers that kept Nebraska from winning more?

“I really think it’s just a matter of being able to make big plays when we need them, and step up,” Williams said. “We had some really great opportunities in several of those Big Ten games. We’d get the ball back in a tie ballgame with less than a minute to go, and then we’d maybe have an untimely turnover.”

Nebraska will also lose senior starters Hannah Whitish and Nicea Eliely to graduation. It will return two of its top three scorers in Haiby and Kate Cain. The Huskers will also benefit if Taylor Kissinger is able to return. She missed most of last season after having hip surgery.

Before next season, Nebraska will likely add players to the roster through graduate transfers or from the junior college ranks. But right now the roster is six returning players and three freshmen.

* Cain broke her own school single-season record with 101 blocks in 2019-20. She set the previous record with 100 blocks as a freshman.

A pair of Huskers — Kate Cain and Leigha Brown — were recognized in the league's annual awards.

Omaha announced the hiring of Carrie Banks, who spent the past four seasons as an assistant coach and recruiting coordinator at Ohio State.

“Ever since I was a freshman at Cal, Nebraska would always be the place that I talked about with my friends and family.”

The Minden native faced setbacks during her rehabilitation following surgery, and her participation was limited this summer.

Nebraska’s Ashtyn Veerbeek (left) and Grace Mitchell (center) shown on the bench as the Huskers trailed by four points with a second left in a game against Indiana on Feb. 9 at Pinnacle Bank Arena.

Nebraska women's basketball head coach Amy Williams instructs the players during the second half against Illinois in February at Pinnacle Bank Arena.