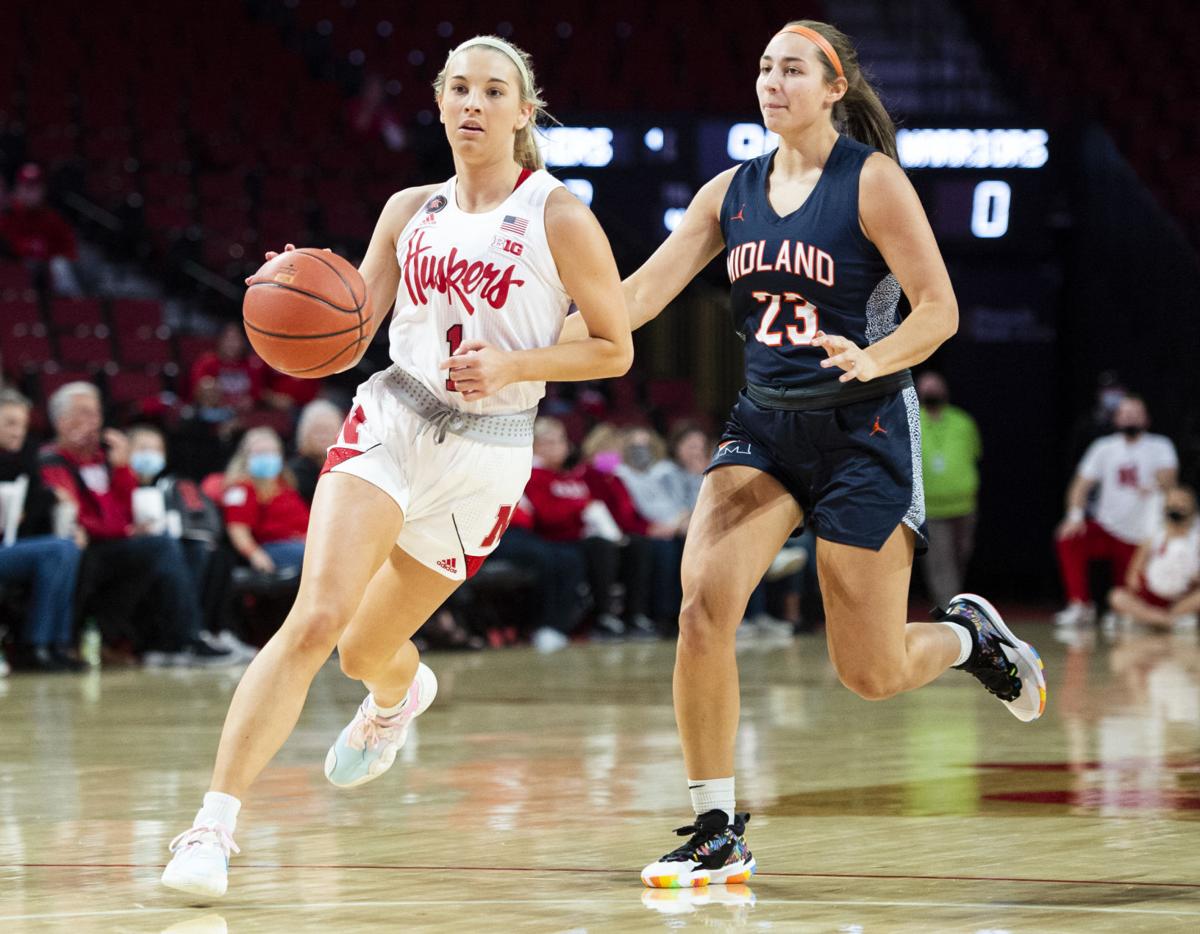 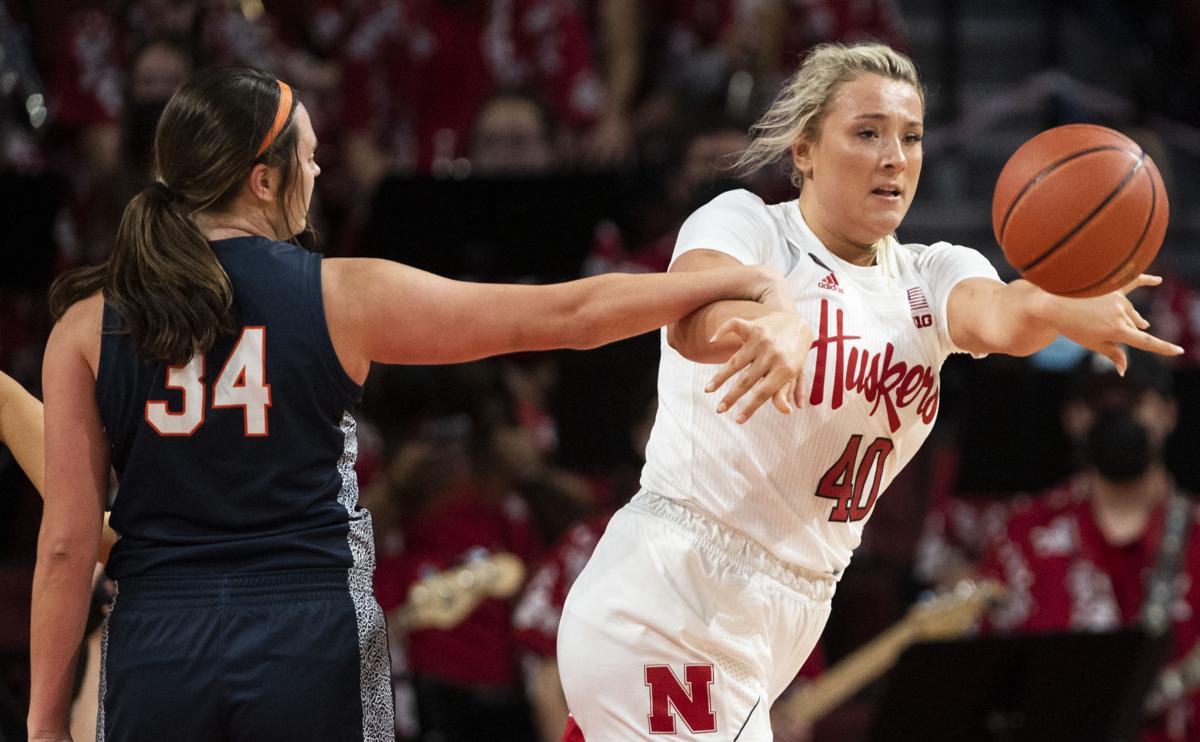 Exhibitions aren’t like real college basketball games, and you want to know why?

Because Nebraska's Sam Haiby, needing to attend an exam on Monday, prompted the team to set the start time for its exhibition against Midland for 7:30 p.m., about 30 minutes later than normal.

Hey, fans have waited a long time to be back watching women’s basketball at Pinnacle Bank Arena, what’s a few more minutes?

Haiby has a few evening lab classes this semester, and had an exam in an anatomy class Monday. She’ll be able to adjust her schedule with a few more conflicts during the regular season. But this time she took the test, and arrived to the arena about 15 minutes after the game started.

She got warmed up as best she could, and entered the game for the first time a few minutes into the second quarter.

“I had an exam to take care of, but I will never be doing that again,” said Haiby a junior all-Big Ten guard majoring in nutrition and health sciences. “Coming in (to the game) cold is not fun. I think I got here when there were four minutes left in the first quarter, and then I had to warm up and everything.”

Jaz Shelley, the Oregon transfer from Australia, scored 14 points. She opened the game with her go-to shot, a three-pointer, and then made three more.

Ashley Scoggin scored 11 points, and Isabelle Bourne had 10. Twelve of the 13 Nebraska players in the game scored.

Markowski scored just a few moments after entering the game for the first time. And she scored numerous times inside after taking a lob pass from the wing. She made six of her first seven attempts.

Nebraska will play bigger and better opponents this season that will challenge Markowski in ways that Midland did not.

But Nebraska coach Amy Williams still sees things in Markowski that will help her score against many teams this season.

“She wants the ball, and that’s the biggest thing,” Williams said. “She will work for 30 seconds of a possession to try and find ways to get the basketball. She’s not afraid of contact and she’s not afraid to work. She just continues to go after it, and she will rebound. Those are the big things that I think are going to put her in positions to contribute on the offense end.”

Markowski has learned a lot since joining the Huskers this summer from Lincoln Pius X.

The Huskers are nowhere close to defining roles or a lineup. But here's why Williams isn't worried about it

NU women's hoops TV schedule is here. Check out when you can see the Huskers

“It’s definitely been a lot different than it was in high school, especially offensively,” Markowski said. “Just bigger bodies. In high school I was able to just go up and I was playing against small girls, and now the girls are just as big. So I’m developing post moves, and finishing has been my main focus.”

Nebraska was playing in front of fans at PBA for the first time since Feb. 22, 2020 — 617 days ago — and welcomed in 3,069 fans. Haiby and Bourne were the only two current Huskers to play in that game against Illinois.

“It’s a pretty special feeling for all of us,” Williams said.

Nebraska made defensive intensity a focus this season, and started well with 17 steals.

“I think we’re excited to make defense a priority for our team,” Bourne said.

Nebraska got what they wanted from the exhibition, including some game film that will show the team what they need to work on. Nebraska allowed too many kick-out threes, second-chance points and fouled too much, Williams said.

Nebraska plays its first game on Nov. 9 against Maine. That will start a stretch of three games in six days.

Sophomore guards Trinity Brady and Nailah Dillard are each still dealing with long-term injuries and were unavailable to play. 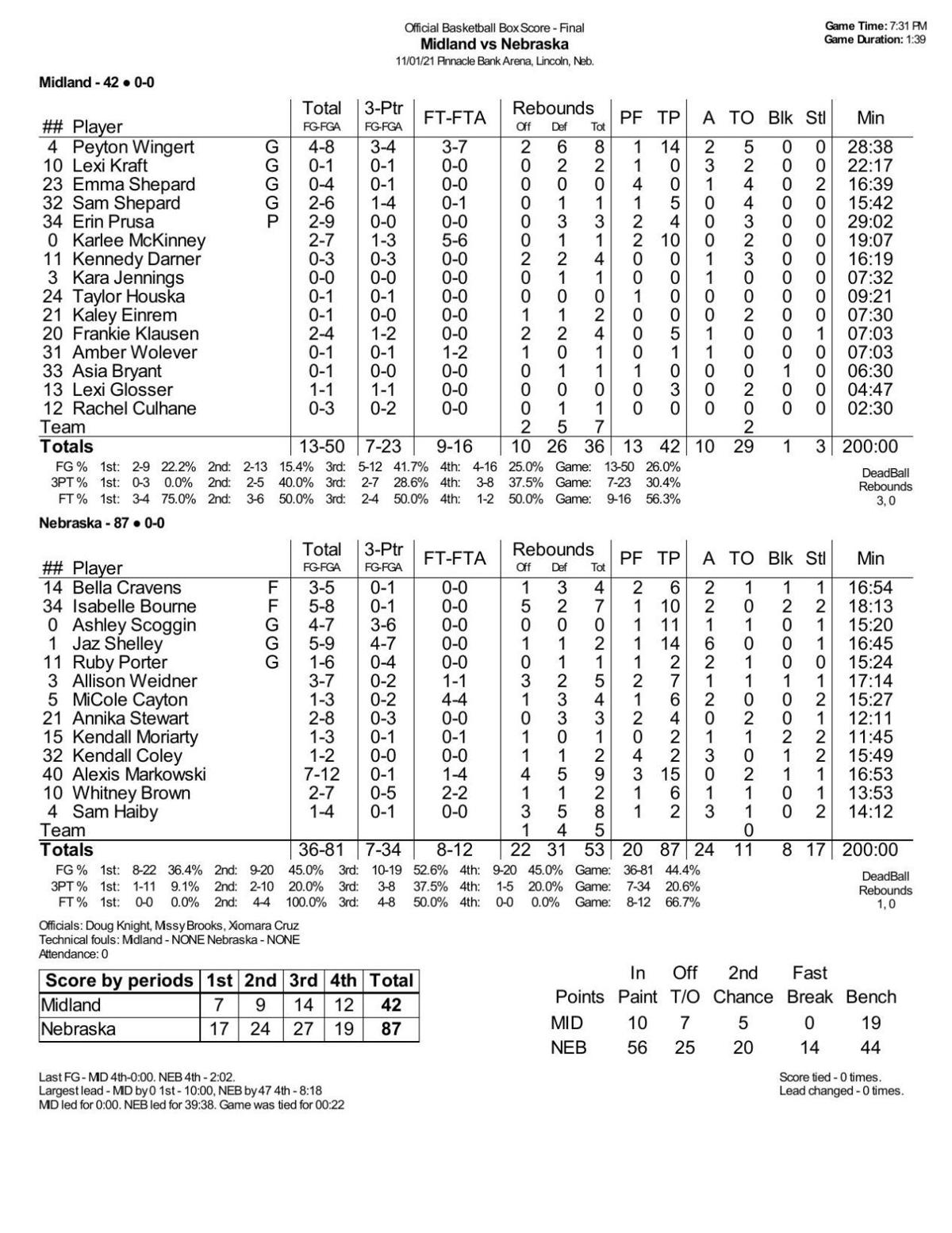 Kent Pavelka and Matt Coatney are happy to get back to normal in broadcasting Nebraska basketball games.

Three things to watch for in the 2021-22 Nebraska women's basketball season.

Husker women's hoops: Meet the players suiting up for Big Red in 2021-22

Get to know the Husker women's basketball team for the 2021-22 season.

NU's Williams thinks fans returning to PBA are in for a treat: 'Our fan base is going to love watching them'

The Husker coach said this season’s team is going to be an incredible group to watch, adding the feeling is reinforced every day at practice.