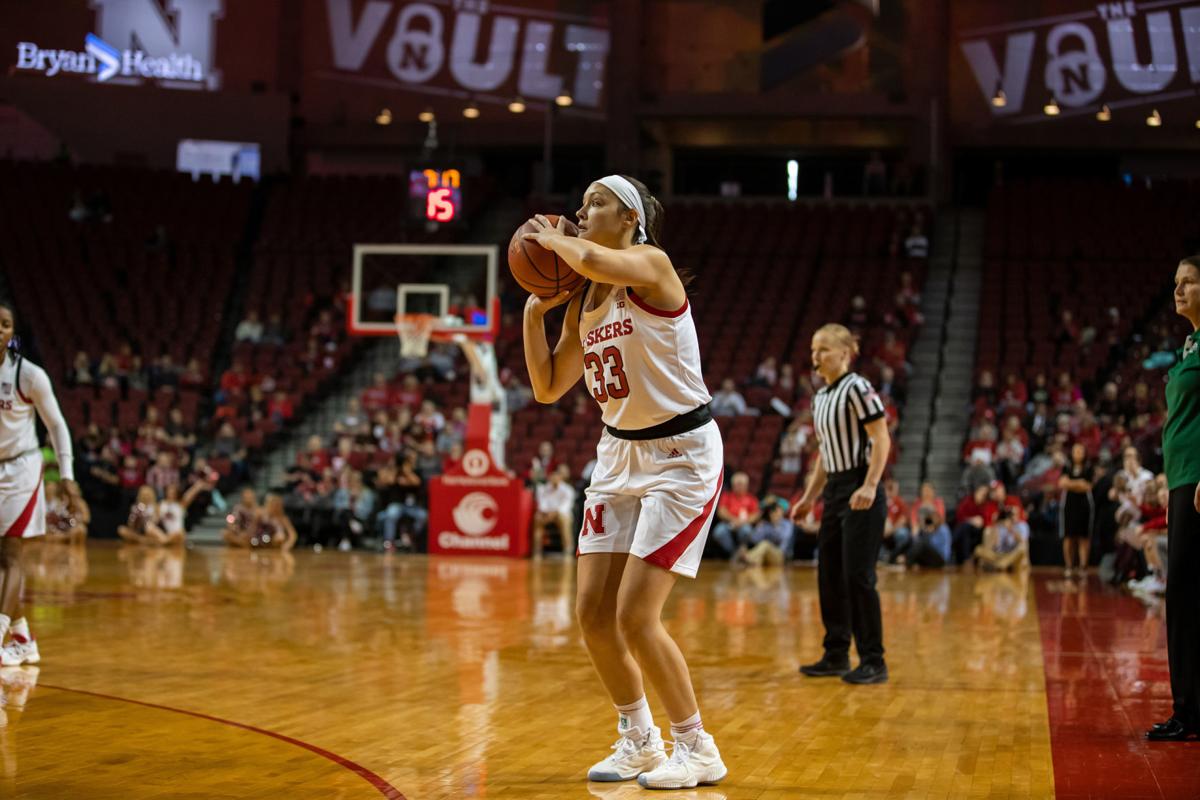 When the Nebraska women’s basketball team beat USC Upstate earlier this season Taylor Kissinger had a record-breaking game, making all six of her three-point attempts. 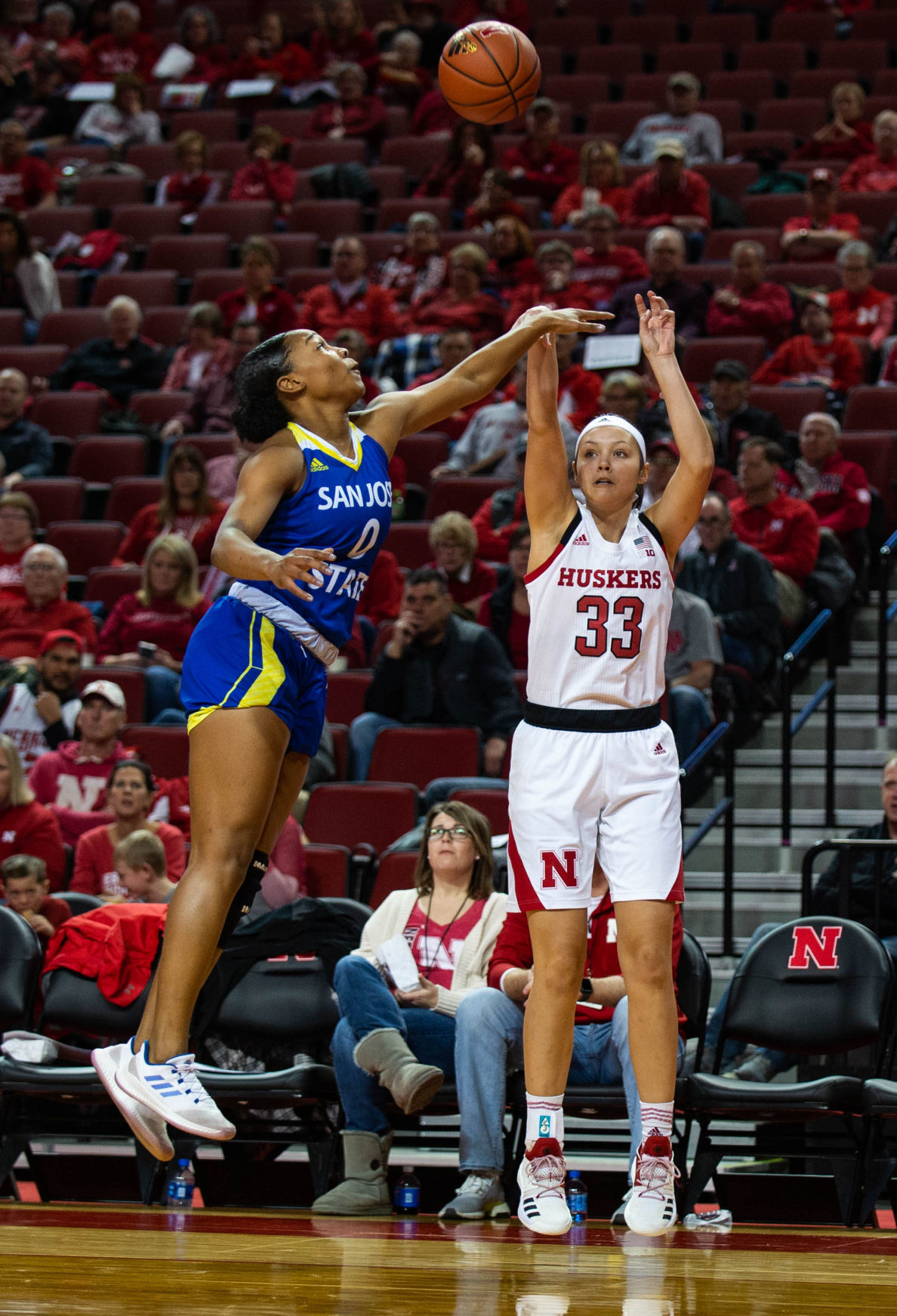 Amy Williams tapped the table she was seated at before she answered a question that would heap praise about the way Taylor Kissinger has been shooting three-pointers for the Nebraska women’s basketball team this season, not wanting to jinx what Kissinger has going.

“It’s very impressive when you stop to think about it,” said Williams, Nebraska’s third-year head coach.

And I guess we’ll take the blame if Kissinger misses all of her three-pointers on Thursday, when Nebraska hosts Northwestern.

Going into that game, Kissinger ranks among the most effective three-point shooters in the country. Kissinger is shooting 49.4 percent on her three-pointers this season, making 41 on 83 attempts. She ranks third nationally in three-point percentage. Katie Campbell of Gonzaga leads the chart by making 50.6 percent.

But it doesn’t seem likely that Kissinger will make a big drop in how effective she is shooting threes because of how she tries to limit herself to three-pointers she feels really good about making, and the amount of work she puts into it.

Here are a few of the stats that show Kissinger's consistency shooting threes:

* She has only had two games when she hasn’t made a three-pointer, and she took only two attempts in each of those games.

* Through six games, she was shooting 62 percent on three-pointers, a stat that got a big boost after she was a school-record 6-for-6 on threes against USC Upstate. But through 12 games she was still shooting 51 percent on threes.

* Over the past three games combined, Kissinger has shot 57 percent on threes (8-of-14).

The sophomore guard from Minden has made a big jump from her freshman season, when she shot 36 percent on threes. Kissinger points to changes in both her fundamentals and mindset for her improved efficiency.

“I think I’m just getting my feet set a lot quicker, and I’m only taking the shots where I know I’m going to have a higher percentage of it going in,” Kissinger said. “Last year I came off as a freshman, and I was excited to play and everything, so I was kind of just shooting everywhere, honestly. And this year I have limited my shot selection to better shots for our team.”

Kissinger will have a chance to make the program’s top-10 list for season three-point field goal percentage. Kate Galligan tops that list for the 45.6 percent she shot in 1996.

Kissinger tries to shoot for about 30 minutes outside of the team practice, and following a similar work ethic is the advice that she’d give high school players who want to be good shooters.

“I would just say get in the gym every day and just work on your shot. It doesn’t have to be pretty, as long as it goes in,” Kissinger said.

Kissinger’s shot may not be perfect, but it’s pretty good, and she does a great job of being ready to shoot right when she gets a pass.

“If you’re watching fundamentally, there is maybe some things that people could pick apart when it comes to technique or form,” Williams said. “But this particular player at 6-foot-1 and with a high-arching release, and then she gets if off fairly quickly, she’s just perfected it with lots and lots of repetition.”

How would Kissinger describe her shot?

“I mean, I think it looks pretty good,” said Kissinger, showing her personality that Williams describes as quiet, but funny.

Williams appreciates that Kissinger doesn’t take a bad shot over a good attempt for a teammate, but would also like to get Kissinger more attempts. Kissinger averages 2.28 threes made per game, which ranks 119th nationally.

Nebraska women rally to beat No. 23 Minnesota to end streak of losses against ranked teams

Of the top 30 players in scoring per game in Big Ten Conference women’s basketball this season, none plays for Nebraska.

A closer look at the Nebraska women's basketball team's matchup against Northwestern.

Huskers attempt another fourth-quarter comeback but fall short against Northwestern

A closer look at the Nebraska women's basketball team's matchup against Wisconsin.

The Nebraska women’s basketball team recently made a change to its starting lineup, it just wasn’t the change that some fans expected.

A disappointing season so far for the Nebraska women’s basketball team had another bad moment on Sunday, when Nebraska's horrible finish to th…

A closer look at the Nebraska women's basketball team's matchup against Purdue.

A bad fourth quarter cost the Nebraska women’s basketball team in a 67-61 loss against Michigan on Thursday in Ann Arbor, Michigan.

Husker women down No. 24 Michigan State behind season-high 12 threes

Hannah Whitish says the Nebraska women’s basketball team has players at every position who can make three-pointers, and that even goes for the…

The Nebraska women’s basketball team didn’t achieve one of the goals it had to start the season when it didn’t want to be a one-hit wonder.

When the Nebraska women’s basketball team beat USC Upstate earlier this season Taylor Kissinger had a record-breaking game, making all six of her three-point attempts.