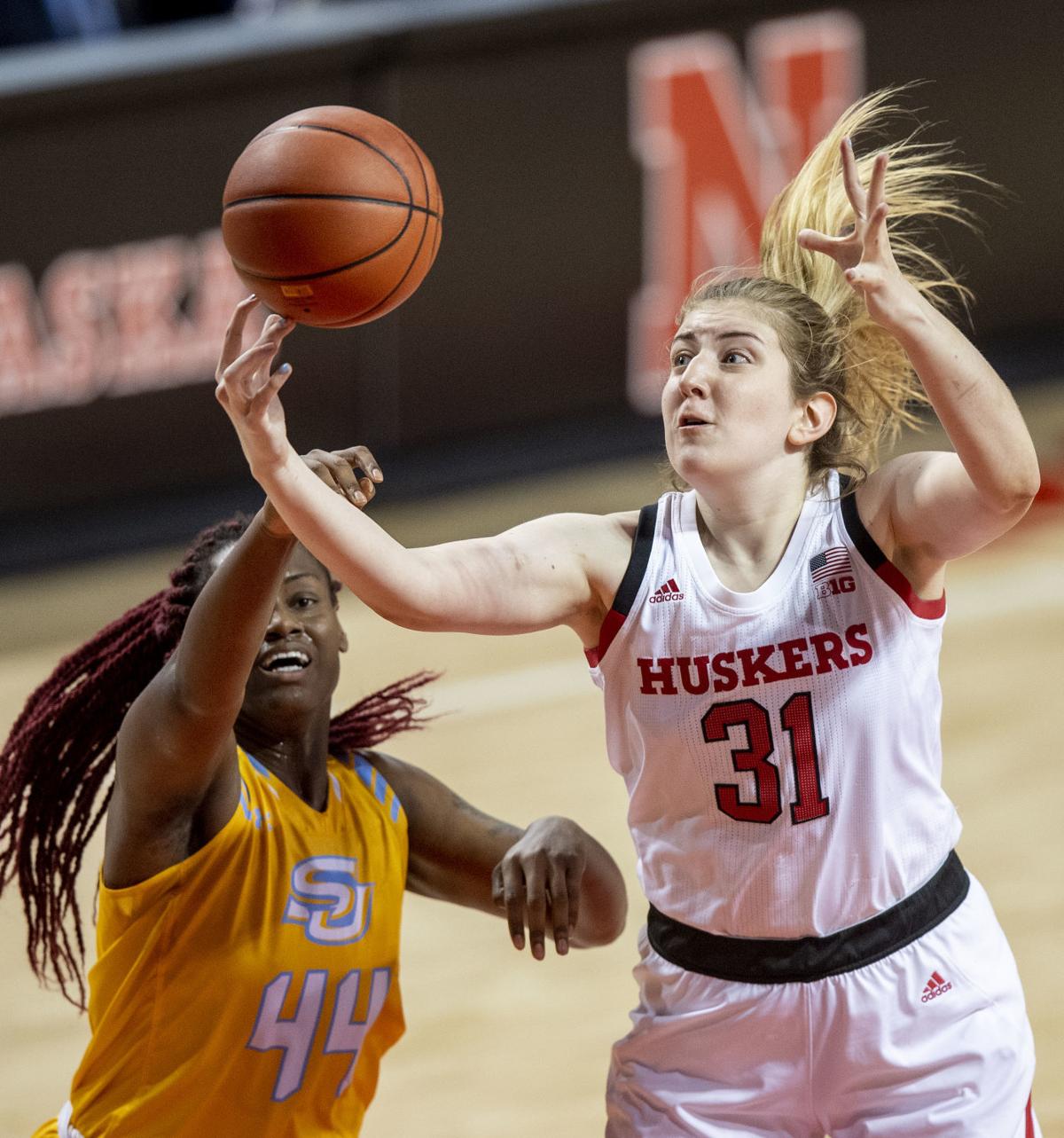 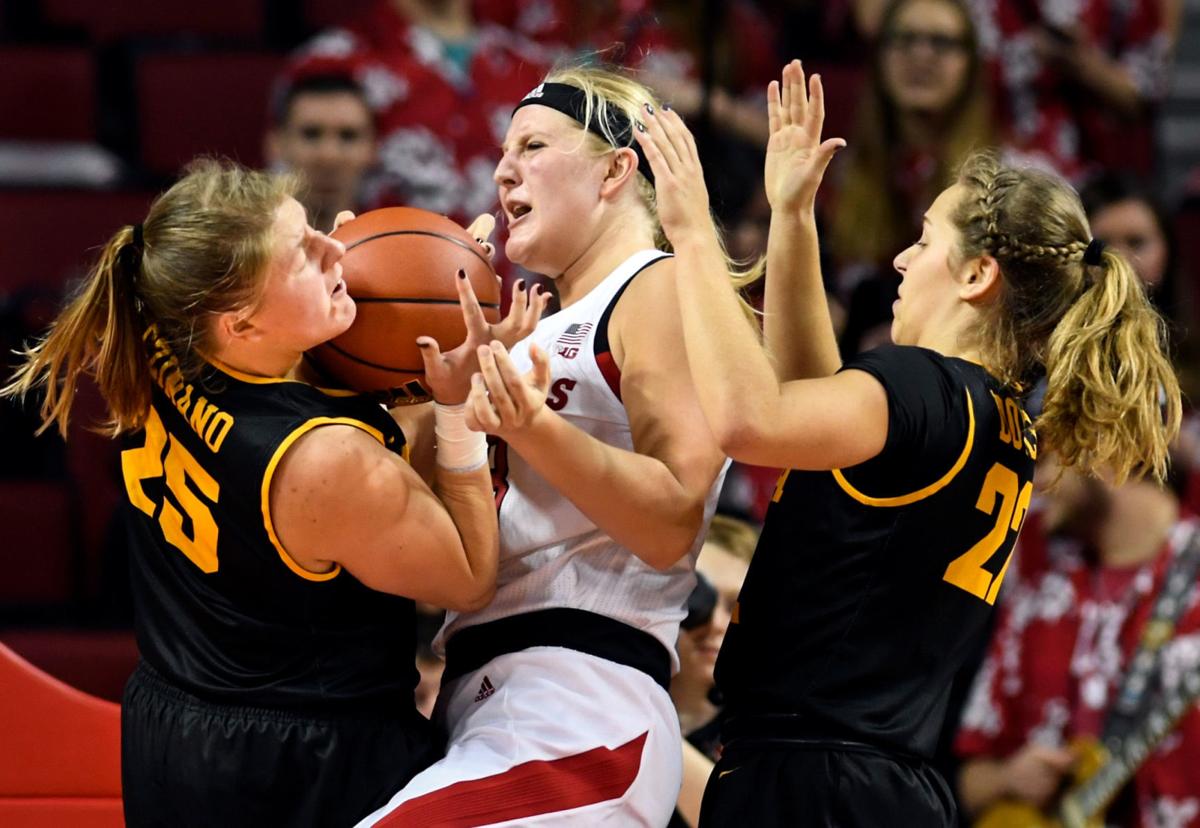 The Nebraska women’s basketball team has two awards it gives out after each game — traveling trophies of a sort — in the form of large, gaudy chains.

What you need to know is that a chain doesn't change hands for something like three-point shooting, but there is one specifically designated for the player with the most rebounds. That's how important rebounding is.

The other chain is for other hustle plays such as taking charges and blocking shots.

The coaches want the players always thinking about rebounding, and the chain is a fun reward for doing so. The player who gets the chain sometimes wears it to the news conference after the game.

Rebounding is an area that could be big factor in how good of a season the Huskers have. Does Nebraska keep building on its 12-2 record to start the season and make a return to the NCAA Tournament? Or does Nebraska get tripped up in some Big Ten games it probably should win and come up short?

Nebraska will look to move to 3-1 in Big Ten play during Thursday’s home game against Wisconsin. The 7 p.m. game will be televised on NET.

Nebraska’s defense is holding opponents to an average of about nine fewer points per game than last season. Nebraska can score enough to win a lot of games, averaging 74 points a contest. But rebounding has been an area where the Huskers have been more up-and-down.

In Nebraska’s previous game, rebounding cost the Huskers a chance to win, when the Huskers lost 78-70 against Michigan State in overtime. The Spartans had 22 offensive rebounds.

“We’re bipolar if you look at our last two games,” Williams said. “Against Michigan State we give up 22 offensive rebounds and had a very hard, disappointing defeat. And then against Minnesota we took care of the boards a little bit better and we came out victorious. If that doesn’t show us the lessons that we want to see, I don’t know what does.”

In Nebraska’s two losses this season, against Michigan State and Creighton, Nebraska did not win the rebounding battle. Against Creighton each team had 41 rebounds.

Williams says there is often a correlation between how well a team crashes the boards and winning.

“We have always stressed with our teams that if you want to win, rebound,” Williams said. “It’s been easy for us to point to in the Big Ten over the last several years the teams that rebound are the ones that generally are up there in the top of the league and competing for the conference championship.”

Nebraska is equipped to be a good rebounding team, Williams said. At 6-foot-5, Kate Cain should be able to pull in her share of rebounds. In three Big Ten games, Cain is tied for first in the league in rebounding (13.7 per game).

Forward Ashtyn Veerbeek has shown an ability to fight for rebounds, even outside of her area on the court. Trinity Brady and Sam Haiby have been able to help with rebounding from the guard position.

Against Minnesota, Haiby got a defensive rebound, turned up the court and was never stopped, getting a layup, drawing a foul and converting a three-point play.

But Williams says most teams should be able to be good at rebounding.

“In my opinion, rebounding is about discipline, it’s about hard work, it’s about effort, it’s about want-to and desire to stay disciplined and be physical. So everybody is capable of that,” Williams said.

Nebraska has goals for each game in regard to rebounding. They can change a little for each game, but typically the goal is to not allow more than nine offensive rebounds and to have more rebounds overall than the opponent.

A matchup with Minnesota gives the Huskers a chance not only to bounce back from only their second loss, but to knock off a ranked team.

2020 local and national sports calendar: From state tourneys to the Final Four in Omaha and everything in between

Welcome to 2020. If you're a sports fanatic, you'll want to keep this page bookmarked. Here's a look at the big events coming this year.

A late foul, missed free throws and an inability to nab rebounds created a perfect storm for the Huskers, who saw a six-game winning streak end.

Kate Cain has rebounded in her junior season to help Nebraska to its best start in seven years.

'We’ve got so many weapons on our team': Nebraska women use pair of big runs to pull away for 13th win

The Nebraska women’s basketball had runs of 11-0 and 14-0 in an impressive 65-50 win against Wisconsin on Thursday at Pinnacle Bank Arena.

For years, the Big Ten has been widely dominated by Maryland. But there's a reason to expect more teams jousting for the top this winter.

A closer look at the Nebraska women's basketball team's matchup against Rutgers.

'It was just tough all night': Turnovers cost Nebraska women in road loss to Rutgers

The Huskers are set to make their second trip to the East Coast in the last five days, signalling the difficulty of the annual Big Ten schedule.

A closer look at the Nebraska women's basketball team's matchup against Maryland.

Williams shares insight into how Nebraska women prepare for next opponent

The work doesn't stop for Amy Williams when her team walks off the court. In fact, it is likely just beginning.

'They kind of hit us in the mouth': Husker women rally back but fall short against Purdue

'That’s not good enough to win in the Big Ten': Husker women go cold in overtime loss to Ohio State