It took one of the most dominating individual games ever by a Nebraska women's basketball opponent to keep the Huskers from a second win against a top-20 team in about one week.

It was Nebraska’s third straight game that came down to the final seconds, with Nebraska winning the first two, including against then-No. 15 Northwestern last week.

This time Nebraska (5-4, 3-3 Big Ten) stormed back from an 11-point deficit with just 4 minutes remaining in the fourth quarter.

Nebraska went on a 9-0 run in about 3 minutes to cut its deficit to 60-58 with 59 seconds remaining. But Hillmon got another offensive putback, and Nebraska wasn’t able to tie the game or take a lead in the final minute.

Trailing by two points with 2 seconds left in the game, Nebraska’s Whitney Brown got a steal, but Nebraska only had time for a half-court shot at the buzzer that wasn't close.

Michigan needed everything Hillmon had because it didn’t have its second-leading scorer, Leigha Brown, for the first time this season.

Brown, a transfer who played for Nebraska the previous two seasons, missed the game for COVID-19 reasons, according to the Michigan athletic department.

Hillmon tied her career-high for points and had a career-high in rebounds. She made 15 of Michigan’s 24 field goals. At one point in the first quarter she had scored Michigan’s last 12 points in the game.

“It was a special effort by a special player,” said Nebraska coach Amy Williams in an interview on the Husker Sports Network. “I think (Hillmon) just really felt the need to really elevate her game tonight and she found a way to really spark them. Anytime that you have one player that has more offensive rebounds than our entire team, that’s going to be a problem.”

But another great game by Sam Haiby, with 27 points, and holding Michigan well below its shooting average, gave Nebraska a chance.

“It’s really just the most remarkable thing I’ve ever seen,” Williams said. “If you would have told me before the game that we were going to give up 30 offensive rebounds, I would have thought the game was going to be a 30-point blowout. For our kids to do the number of things they had to do right, and continue to fight and scratch and compete and put ourselves in a position to win a ballgame even though we gave up 30 offensive rebounds is really pretty remarkable.”

Still, watching the replay of the game and seeing Hillmon get rebounds even when two or three Huskers were by her will be hard to watch.

“We know that’s why we lost the game today,” Williams said.

A back-and-forth first half ended with Nebraska leading 35-34 at halftime.

Hillmon scored more than Michigan’s other eight players combined. Amy Dilk had 11 points for the Wolverines.

Kate Cain added 12 points for the Huskers, and Bella Cravens had 10. 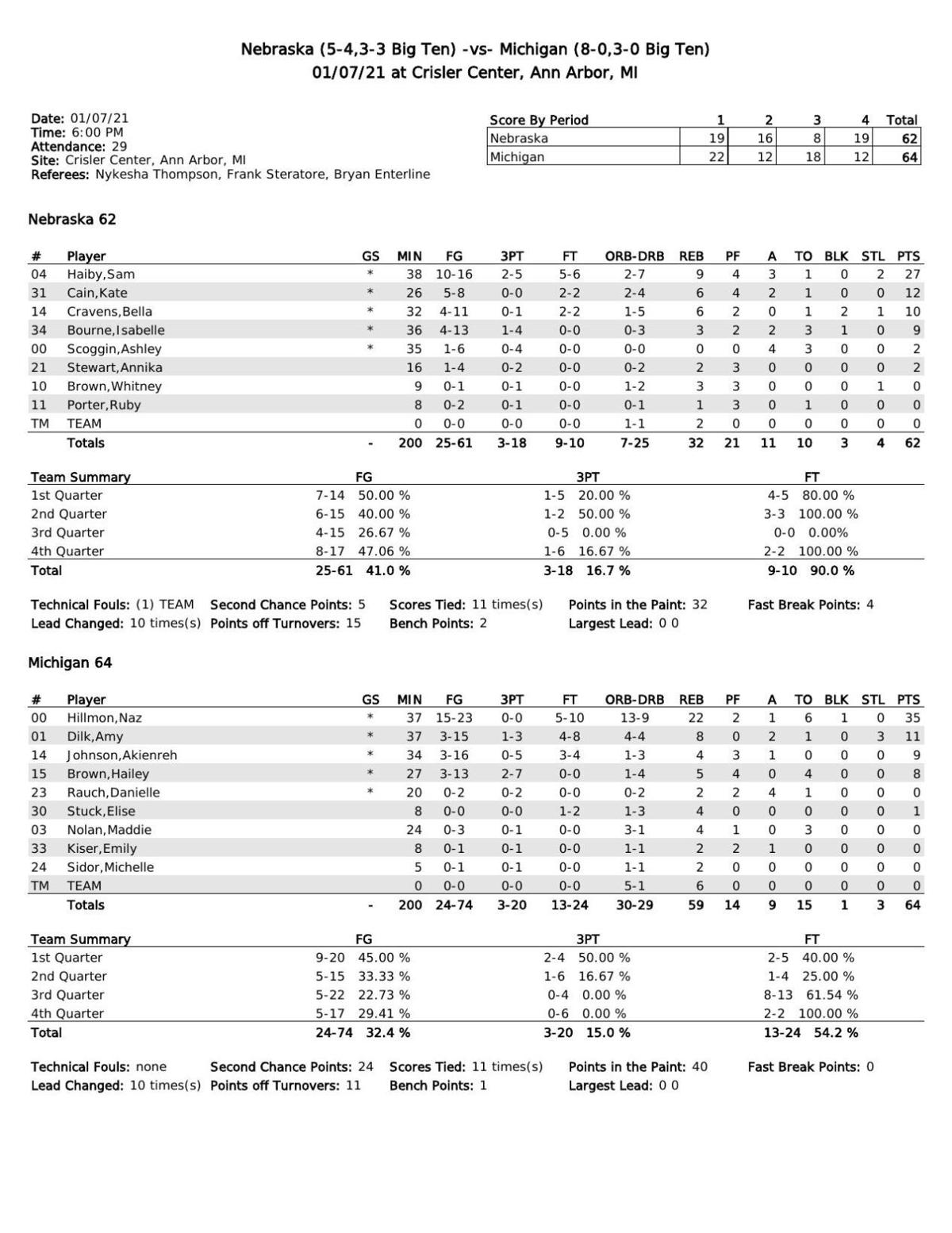 The Husker women have seen a lot of turbulence this season — even by 2020 standards. Why doesn't the roster have two more players on it?

During Sunday's loss to Indiana, Nebraska had just seven players available due to injuries. But coach Amy Williams doesn't want to use that as an excuse.