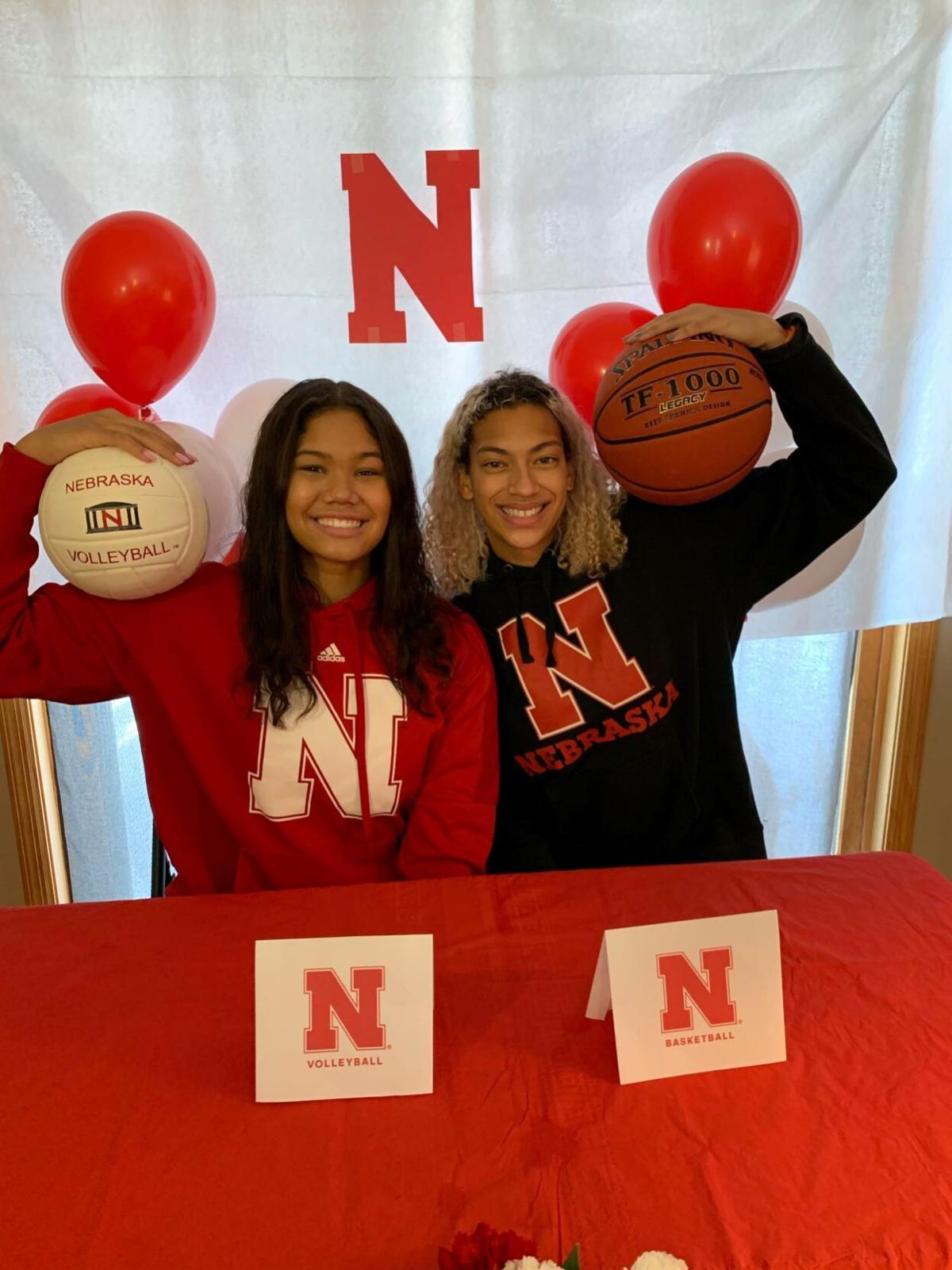 The top recruits for both the Nebraska volleyball team (Kennedi Orr, left) and Nebraska women’s basketball team (Kendall Coley, right) are longtime friends who signed their national letters of intent together on Nov. 11 in Minneapolis. 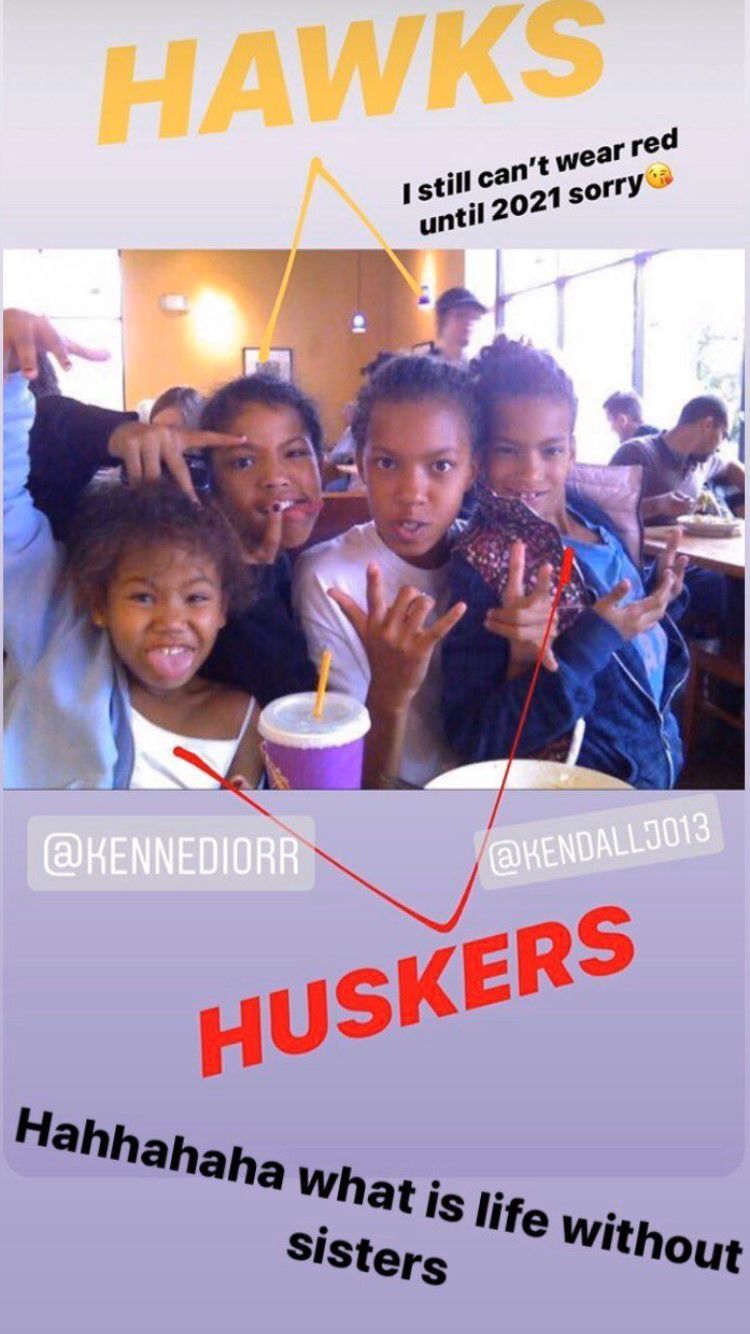 Brie Orr (top left) and Chase Coley (top right) played college sports at Iowa, but their younger sisters, Kennedi Orr (bottom left) and Kendall Coley (bottom right) are going to play for Nebraska. The families have been close for many years. Chase Coley posted this photo on social media after Kendall Coley committed to Nebraska in April.

It’s a special experience for any family when they get to see their children reach their goal of going to college to play NCAA Division I sports.

For the family of Nebraska women’s basketball player Annika Stewart, they’ve got to experience that twice. Hannah Stewart, the older daughter of Peter and Julie Stewart, played basketball at Iowa from 2015-19, and was a starter her final season. Annika is a freshman forward for the Huskers.

What we know, what we don't: Breaking down the Nebraska women's basketball team's storylines

And this story will get even more interesting next year when two of the top recruits in their sport arrive in Lincoln, and then three of Nebraska’s top young female athletes will be siblings of athletes who played college sports at Iowa, the closest Big Ten school to Nebraska.

That’s right, three sets of siblings, each where big sister went to Iowa, and little sister to Nebraska. All three families are from the Minneapolis area.

And then there’s Kennedi Orr, the No. 1-ranked volleyball recruit in the nation in the 2021 freshman class. Her sister, Brie, has been the starting setter on the Iowa volleyball team, although she plans to opt out this season due to the pandemic.

Annika Stewart feels like it’s a special thing that she’ll be following her sister in playing Division I basketball.

“It’s very awesome,” Annika Stewart said. “I loved watching her play, and it definitely helps to see what she went through.”

Stewart’s parents each played basketball in college at North Dakota. Later they played overseas, and coached at small colleges.

“I think looking back, I’ve always wanted to play the game for as long as I can,” Annika Stewart said.

It was while attending Iowa games to watch her sister that Annika Stewart met Kendall Coley. They’d sit in the same section at games cheering on their sisters, not knowing they’d later be college teammates.

“Once we had a commitment from Kendall Coley, her dad showed me a picture of when Kendall and Anni were both down watching their older sisters play and he had picture of the four of them and I was just putting together how crazy that really is,” said Nebraska coach Amy Williams.

Annika Stewart and Kendall Coley also played against each other in high school.

“(Kendall) has a very cool personality, and she’s very energetic and I just loved hanging around her,” Annika Stewart said.

Annika Stewart had a scholarship offer from Iowa. She said her sister was supportive of her decision to pick the Huskers because she knew it was the best fit for her.

Coley was a big recruiting win for the Huskers. She averaged 15.5 points and 7.4 rebounds as a junior.

“She’s a young lady that we’ve been excited about for a long time,” Williams said. “We spent a lot of time the summer before her junior year traipsing around all over the country watching her play AAU ball. And then we spent a lot of time getting up to the cities to watch her high school team play this last year.”

Coley chose the Huskers over Washington. And while Coley wouldn’t have been coming to Nebraska if she didn’t feel good about the basketball program, it helped that Kennedi Orr had already committed to play volleyball for the Huskers.

Kendall Coley has known Kennedi Orr since preschool, and their families are close. Kennedi goes to high school in Eagan, Minnesota; Coley at St. Louis Park.

Before Coley made her visit to Nebraska, Orr could already tell her what Orr thought she was going to like about Nebraska.

When it came time to sign their national letters of intent, they did it together. Kendall tells people that Kennedi is her cousin, because they’re around each other so often.

Coley also plays volleyball, and hers and Orr's schools played each other last year at the state volleyball tournament.

Nebraska women’s basketball player Annika Stewart is the younger sister of Hannah Stewart, who started on the Iowa women’s basketball team in 2018. And next year, three of Nebraska’s top young female athletes will be siblings of former Iowa athletes.

With the No. 1, No. 2 and No. 3 recruits in the PrepVolleyball.com national rankings, the class is considered one of the best recruiting classes regardless of sport.

Nebraska women's basketball team now has games on its calendar

Nebraska is scheduled to begin the Big Ten season on Dec. 10 when the Huskers host Illinois, part of a 20-game league slate.

There’s just five returning Huskers this season. Total. But each made significant contributions to help lift the the team to a win in its season opener.

'It was pretty special for their family': Huskers, Isabelle Bourne get best of big sister and Idaho State

Callie and Isabelle Bourne were each guarding each other from the opening tip, and did for long stretches of the game.

The Nebraska women's gymnastics team will host four meets and the men three in a conference-only schedule in 2021.

The top recruits for both the Nebraska volleyball team (Kennedi Orr, left) and Nebraska women’s basketball team (Kendall Coley, right) are longtime friends who signed their national letters of intent together on Nov. 11 in Minneapolis.

Brie Orr (top left) and Chase Coley (top right) played college sports at Iowa, but their younger sisters, Kennedi Orr (bottom left) and Kendall Coley (bottom right) are going to play for Nebraska. The families have been close for many years. Chase Coley posted this photo on social media after Kendall Coley committed to Nebraska in April.