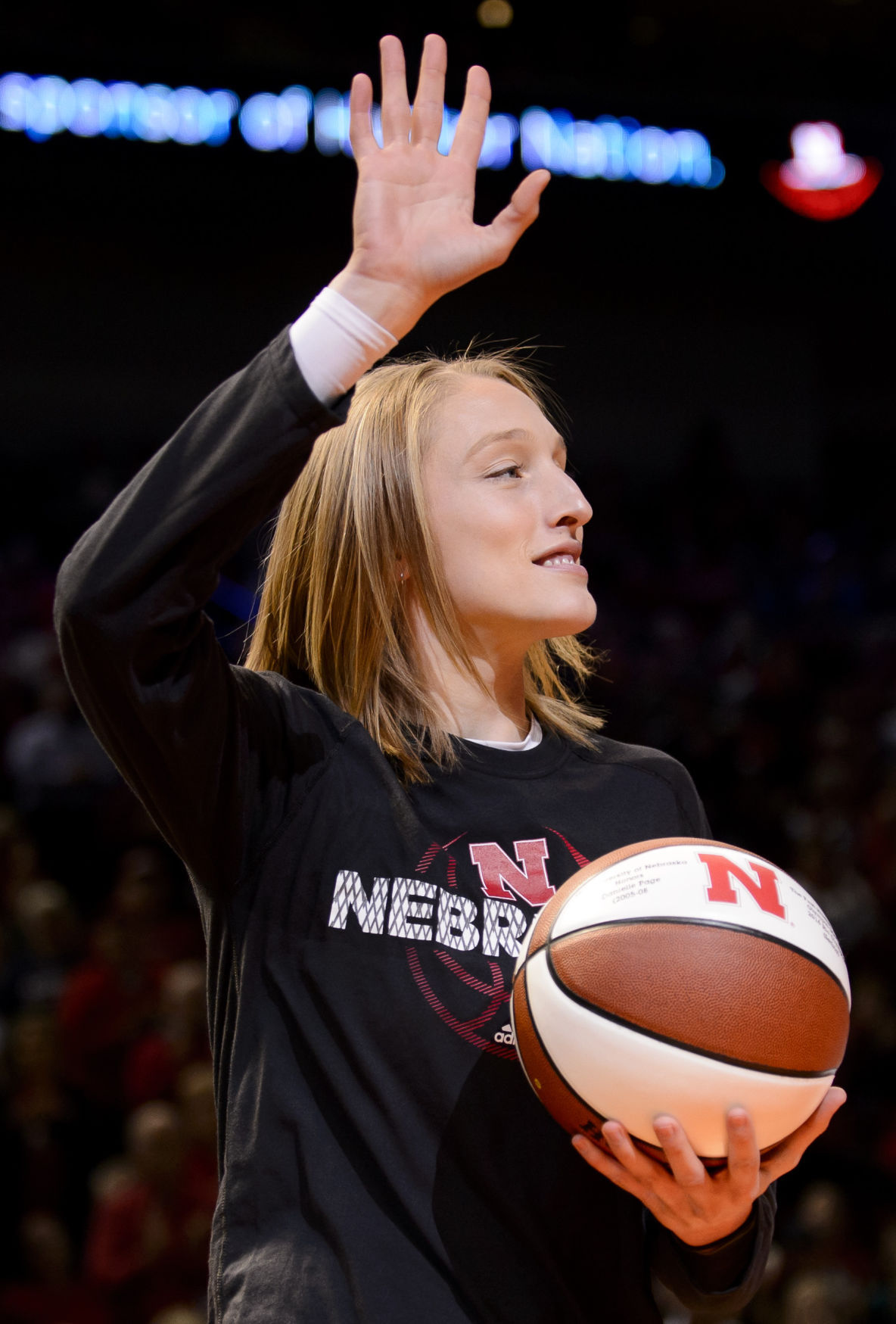 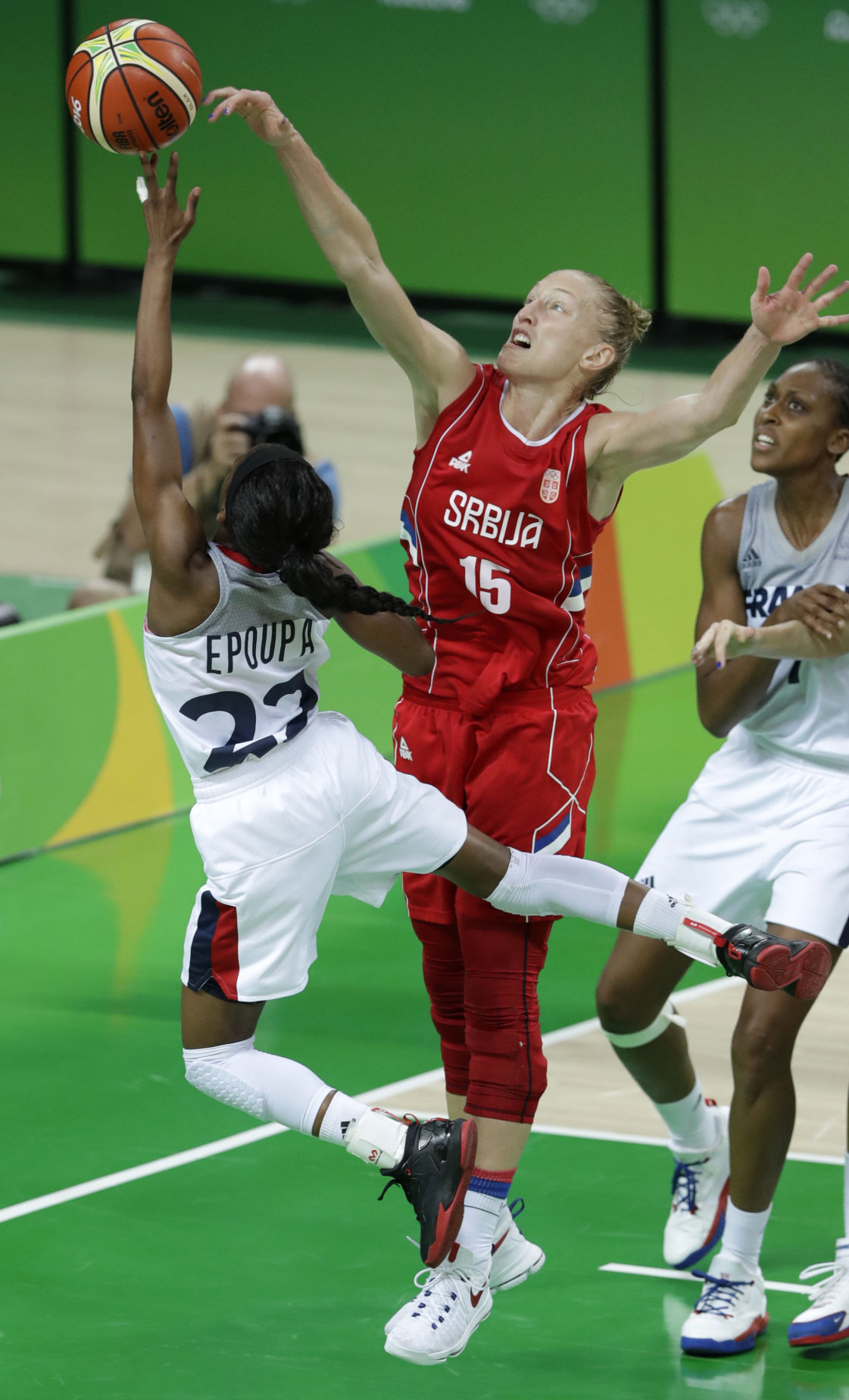 Former Husker Danielle Page (15) blocks a shot by France's Olivia Epoupa during Serbia's victory in the bronze medal basketball game of the 2016 Summer Olympics in Rio de Janeiro in August. 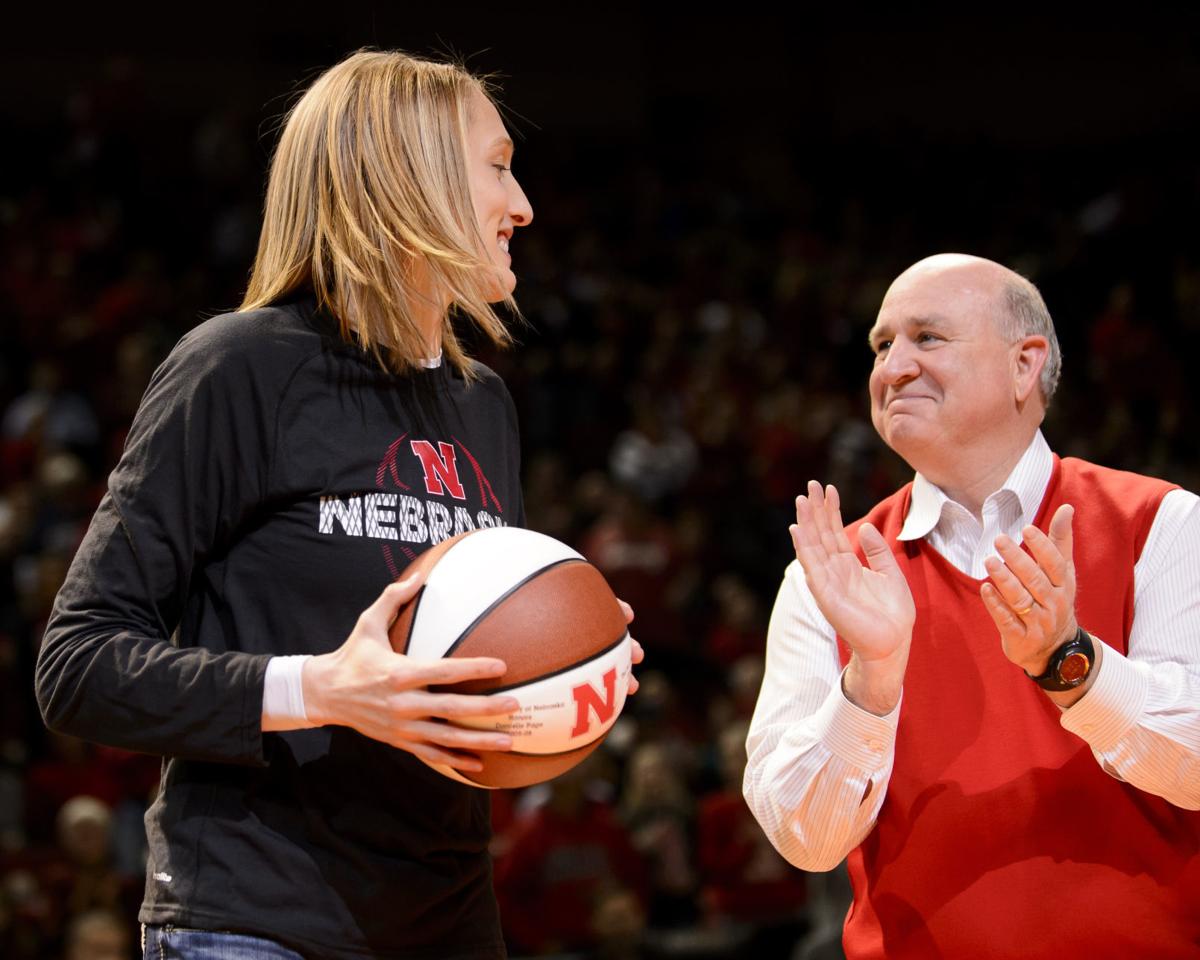 Page’s former teammate, Chelsea Aubry, was a captain for the 2012 Canadian Olympic team.

Once at the Olympics, Page did one better, becoming the first former Husker women’s basketball player to win a medal when she helped her adopted country to its first-ever Olympic medal in women’s basketball, a bronze.

Page, who is from Monument, Colorado, was back in Lincoln last week, and was honored during the Huskers’ game against UConn, getting a standing ovation from many of the 7,500 fans.

“It’s crazy to think about all of the incredible basketball players that have come out of Nebraska, and to think that I’m the first to win an Olympic medal, it just seems unbelievable that someone wouldn’t have already done it with all of the talent that Nebraska has put out historically, and especially recently,” Page said.

Page was one of the top players in France the past several years, and has spent eight professional seasons in Europe, which led her to being asked to join the Serbian team.

“It was kind of right place, right time, right people kind of thing,” Page said of joining the Serbian national team. “I’ve been playing in France for the past five seasons professionally. Two seasons ago, the head coach of the Serbia national team started coaching over in France and I played against her team. It’s kind of the new thing to do, is naturalize an American citizen to play for your national team. She asked around the league about my game and my personality and ended up giving me a call and asked if I’d be interested in a passport and the opportunity to play with the national team, and I was on board right away.”

Page said the coach sold her on the Olympic dream. She was a starting forward for Serbia in the Olympics and averaged 10.6 points, 6.0 rebounds and 1.6 blocks per game.

Serbia winning a medal was a surprise in women’s basketball, Page said.

"Being as we played so poorly in our group to get matched up against Australia in the quarterfinals was a tough draw for us, and no one really expected us to compete with them. Just the talent they put on the court, it’s second only to the U.S., and it was really incredible to steal that game.”

When the team returned to Serbia, there was a big reception, with the president and a rally with flag-waving fans.

She played at Nebraska from 2005 to 2008, when Connie Yori was head coach. Yori resigned last spring in a controversial exit.

“Obviously, being overseas, I don’t know too much about that, but I do know that during my four years here at Nebraska I couldn’t have asked for anything more,” Page said. “Coach Yori took me from some skinny little high schooler who thought she knew basketball to a legitimate player who could make a living playing basketball, and I can’t thank her enough for that. She taught me almost everything I know about the game. There is zero doubt in my mind that there is no way I would have an Olympic medal right now if she wasn’t my coach.”

Yori contacted Page to congratulate her on making it to the Olympics, then again for doing so well.

Page is taking a year off from professional basketball overseas after undergoing knee surgery this fall. She’s hoping she’ll be able to play this summer for Serbia in the European Championships.

Even four months after the Olympics, Page said it’s still amazing to think about the incredible opportunity she had.

“Even now to say that I have an Olympic medal, it’s unreal,” Page said.

After a bad nonconference season, the Nebraska women’s basketball team will look forward to a reset with a few days off, and then the start of…

Forward from Iowa commits to NU women's basketball team for 2018

Ashtyn Veerbeek got to deliver her good news in person to the Nebraska women’s basketball coaches Thursday morning.

Huskies' win streak reaches 86 with rout of Huskers at PBA

The Nebraska women’s basketball team has now joined Baylor, Notre Dame, Texas, Syracuse, Temple and a whole lot of other teams on the other si…

Nia Coffey just keeps scoring for the Northwestern women’s basketball team, and the Wildcats needed all of the senior forward's points to help…

Former Husker Danielle Page (15) blocks a shot by France's Olivia Epoupa during Serbia's victory in the bronze medal basketball game of the 2016 Summer Olympics in Rio de Janeiro in August.