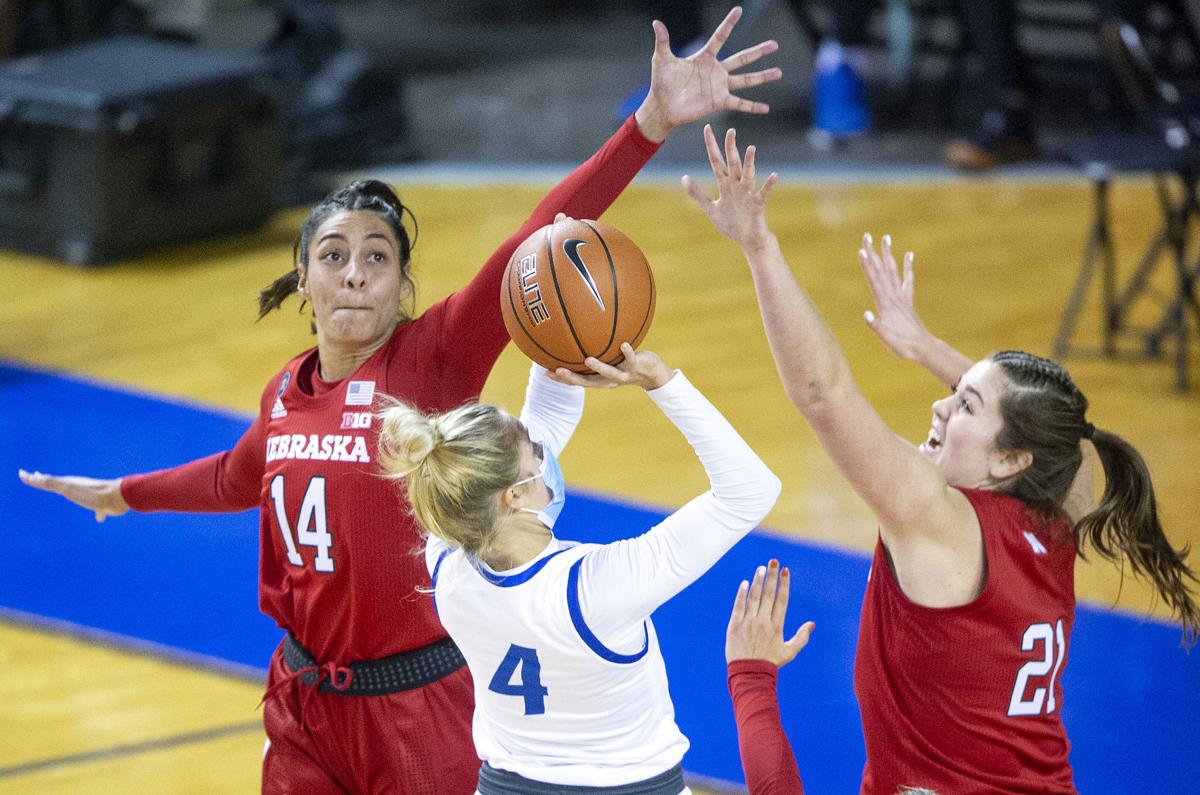 Nebraska's Bella Cravens (14) and Trinity Brady (2) defend against Creighton's Temi Carda during first half Monday at Sokol Arena in Omaha. 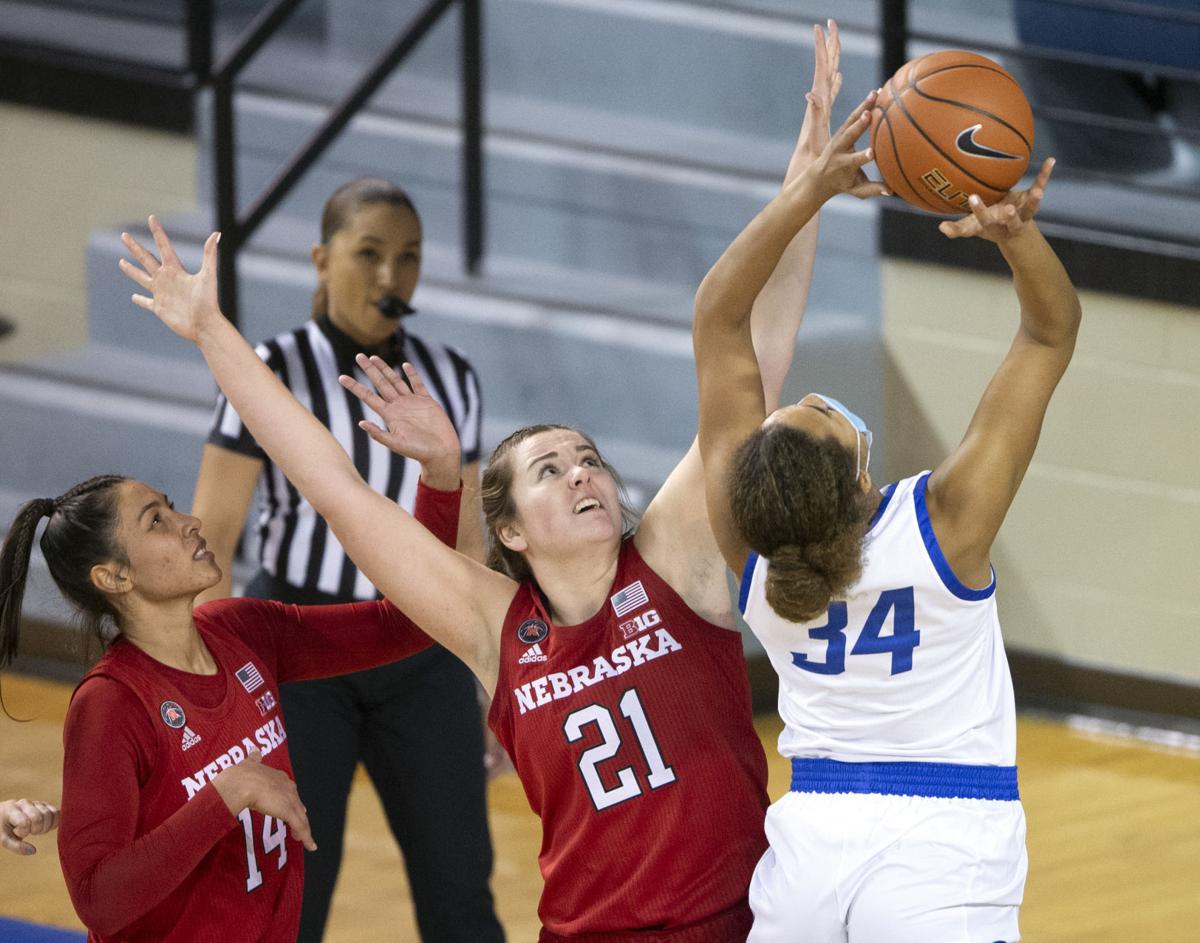 Nebraska's Bella Cravens (left) looks on as teammate Annika Stewart gets a foul call against Creighton's Mykel Parham during the first half Monday at Sokol Arena in Omaha.

OMAHA — You could have looked at the Nebraska women’s basketball matchup against Creighton and thought the Huskers had a nice size advantage, and strength inside with players like Kate Cain and Isabelle Bourne.

You would have been correct. Creighton only has one player 6-foot-2 or taller.

Creighton had to come up with a different idea about how the game could go, and that certainly worked for the Bluejays in their 78-62 win on Monday at Sokol Arena.

Creighton looked at the matchup like maybe Nebraska couldn’t hang with the Bluejays’ speed and shooting.

Creighton used a 9-0 run to start the game and an 11-0 run in the second quarter, to blitz the Huskers for a 21-point halftime lead.

The Jays made 10 three-pointers in the first half. Nebraska knew the Jays would shoot threes, but couldn’t defend them as well as they needed to.

“We just didn’t do our job of really locating in transition,” Williams said. “We’re still trying to get comfortable with each other with how to do that.”

Nebraska's effort to get the ball inside to start the game was hurt by eight turnovers in the first half. Creighton had just one.

Nebraska outscored the Jays 41-36 in the second half, but the deficit was too big.

Creighton used its quickness to get rebounds over Nebraska’s taller players. The Jays also played tough in-your-face defense, and on offense moved the ball around quickly to get some open shots.

“Obviously, in the first half we did a lot of good things,” Creighton coach Jim Flanery said. “We got the game going up and down, and we played at a good pace offensively and did a good job of speeding them up. I thought that kind of negated their size.”

Nebraska only had eight available players to start the game due to injuries to Trinity Brady, MiCole Cayton and Nailah Dillard. That number dropped to seven players when freshman guard Ruby Porter went down with an ankle injury with five minutes left in the second quarter. In the second half, Nebraska had as many players on the bench with crutches (two) as it did substitutes.

Creighton has four players from Nebraska. Crete graduate Morgan Maly scored three points for the Bluejays on a three-pointer.

The Jays next play on Thursday at women’s basketball power UConn, which is back in the Big East this season.

“(UConn is) very good, but they’re younger,” Flanery said. “The time we played them six or seven years ago they actually had a kid who came off the bench who was the runner-up for the WNBA rookie of the year that following year. I remember watching that team before we played them and said, ‘I don’t think we can match up at any position.’ I didn’t tell our team that. But I think this (UConn) team is a little more human, because they’re younger. And maybe we’ve caught up a little bit, too, hopefully.” 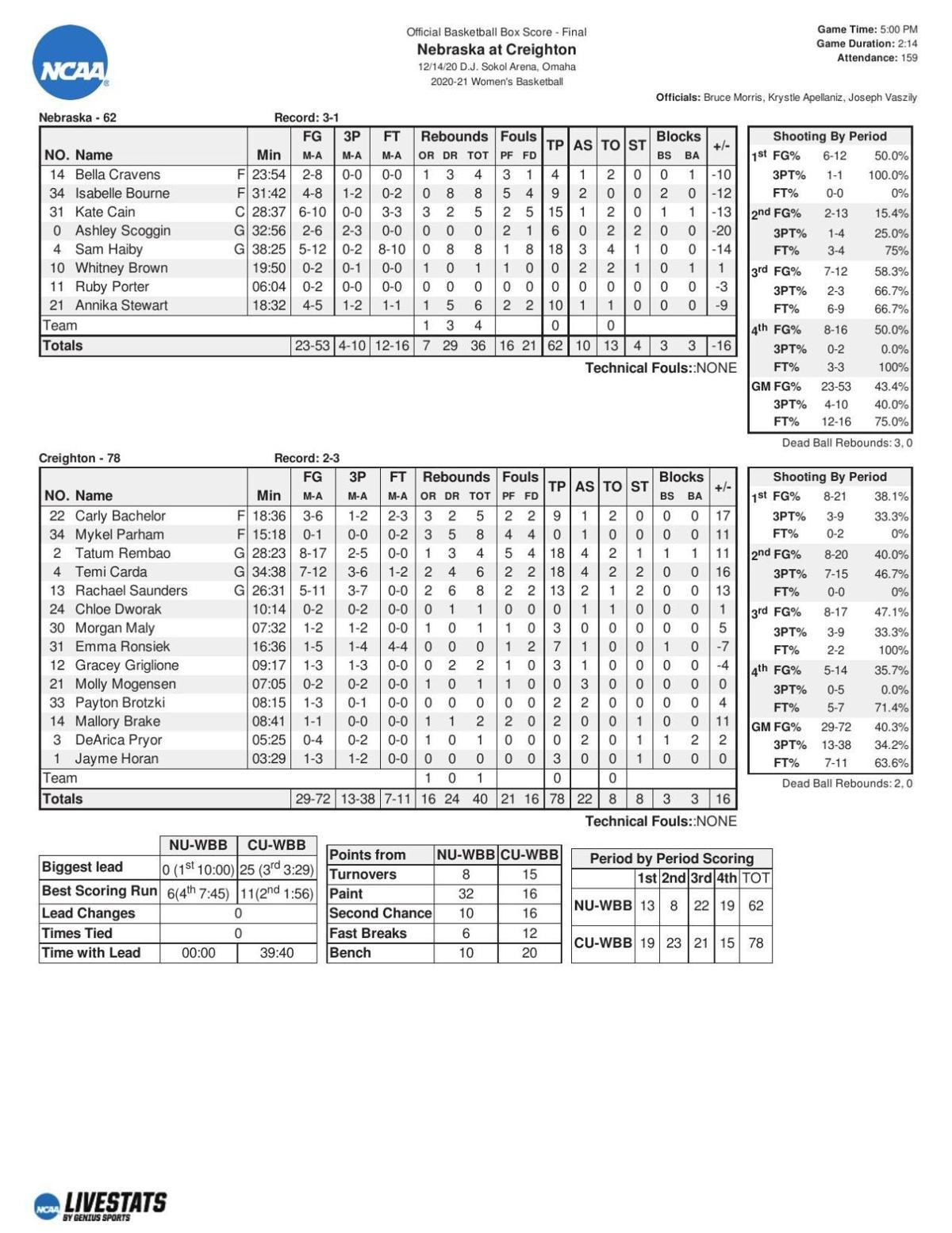 Because of a 2-5 record, Nebraska fans wonder if Scott Frost might again make changes on his coaching staff.

Haiby kept driving to the basket and either scoring or getting fouled. She was 9-for-17 from the field and 14-for-16 on free throws.

A closer look at the Nebraska women's basketball team's matchup against Indiana.

A second season-ending injury leaves Amy Williams' Huskers with nine players heading into the brunt of the conference schedule.

A closer look at the Nebraska women's basketball team's matchup against Purdue.

Why the Creighton women have dominated Nebraska recently, and what the Huskers can do to fight back

In the past five seasons, Creighton hasn't been significantly better than Nebraska, but the Bluejays have won five straight. Here's why.

Nebraska's Bella Cravens (14) and Trinity Brady (2) defend against Creighton's Temi Carda during first half Monday at Sokol Arena in Omaha.

Nebraska's Bella Cravens (left) looks on as teammate Annika Stewart gets a foul call against Creighton's Mykel Parham during the first half Monday at Sokol Arena in Omaha.