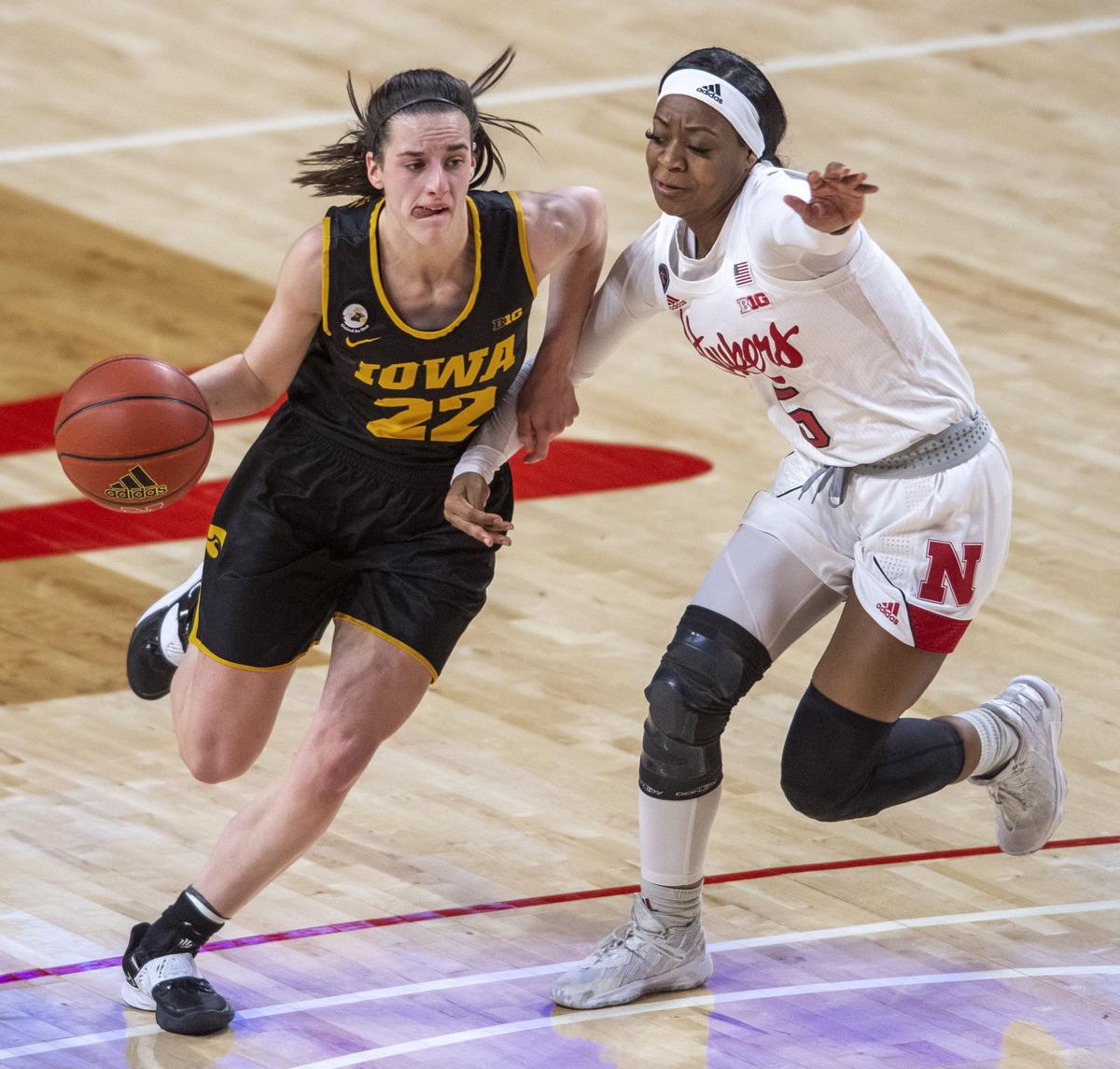 Iowa’s Caitlin Clark drives to the basket in the first half against Nebraska's MiCole Cayton on Thursday at Pinnacle Bank Arena. 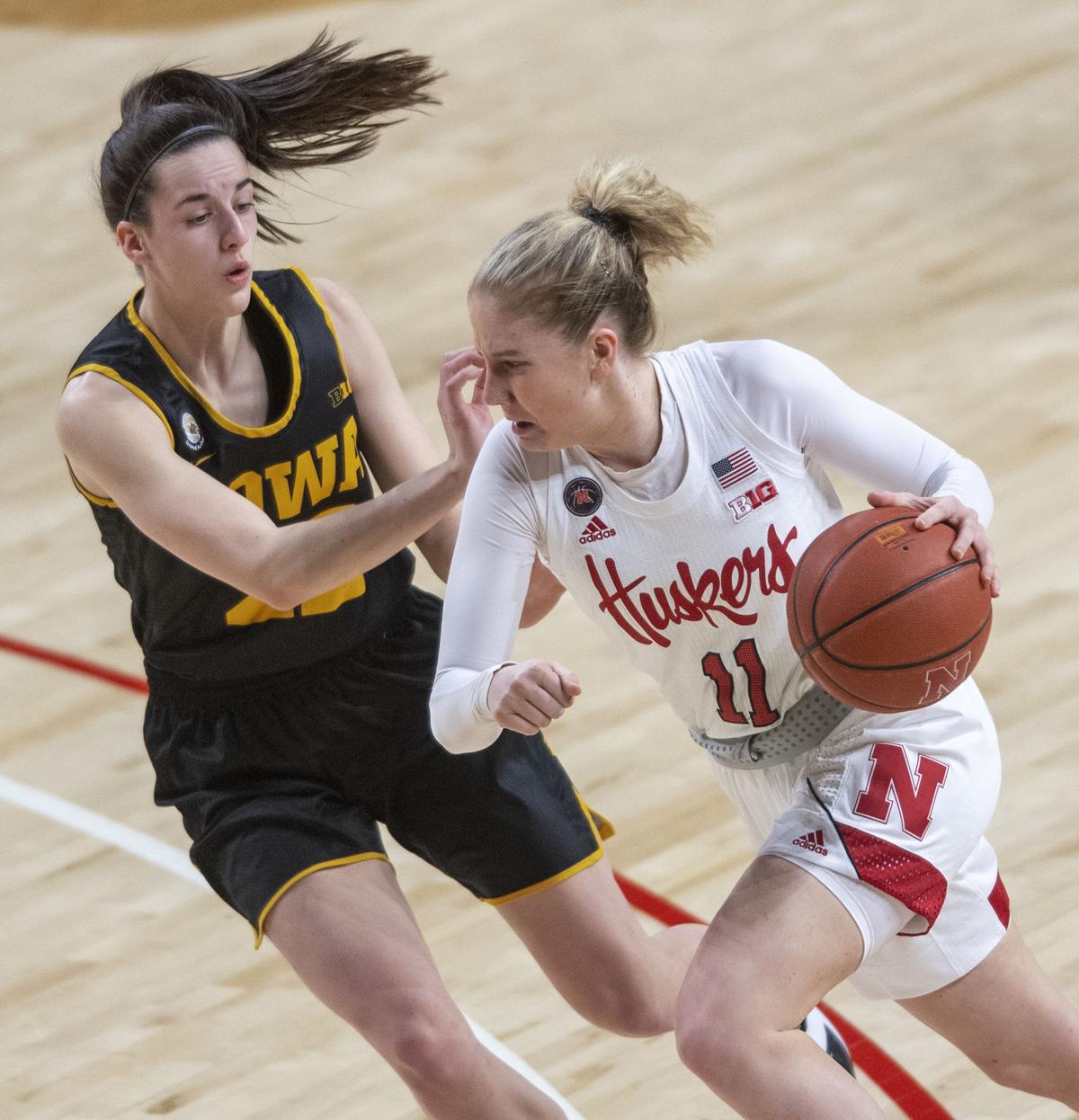 Nebraska’s Ruby Porter (11) drives to the basket against Iowa’s Caitlin Clark in the first half on Thursday at Pinnacle Bank Arena.

Iowa’s Caitlin Clark didn’t score in the opening three minutes of the Hawkeyes’ game against Nebraska on Thursday.

This was a promising development for the Nebraska women’s basketball team as the Huskers jumped to an early five-point lead against Iowa.

Clark's slow start was, at least temporarily, a relief considering the Iowa freshman point guard ranks No. 4 in the nation in scoring and entered after posting back-to-back 30-point games.

In a flash, Clark went to work, and just like that it was her game. When she made a three-pointer at the end of the first quarter she already had 13 points, all in the final 6:40 of the quarter.

And Clark just kept going, scoring a career-high 39 points while leading the Hawkeyes to an 88-81 win at Pinnacle Bank Arena. Her previous high was 37 against Minnesota.

Her 39 points was the most in a women's game at PBA, passing the 35 scored by Nebraska's Jessica Shepard in 2015.

But the West Des Moines, Iowa, product isn’t just a shooter. She also had 10 rebounds and seven assists.

Clark made a season-high six three-pointers on just 10 attempts, including two from really deep. She also scored on jump shots and runners in the lane. She didn’t miss a shot until there was 42 seconds left in the second quarter, when she probably rushed a three. She finished 12 for 18 from the field, and made all nine free throws.

“Obviously 39 points is a pretty special effort from any player, much less a freshman,” said Nebraska coach Amy Williams. “The most impressive thing was just her efficiency. It only took 18 shots to get there.”

Nebraska isn’t known for its great offense, but scored enough to stay with the Hawkeyes in the first half when Iowa had a lot of turnovers. Iowa led 41-35 at halftime.

It was during a 10-0 run in the third quarter that Iowa took control of the game, and that may have been when Clark was at her best. She scored or had the assist on seven of the 10 points.

Even if Clark wasn’t scoring she helped her team get points. She’d draw the defense to her at the top of the key, and then make a drop pass to McKenna Warnock for an open three. Clark would cut to the basket, take the pass, draw two defenders and pass to Monika Czinano for a layup.

Playing defense against Clark can feel like a lose-lose situation.

“I think that’s the challenge,” Williams said. “I think that’s the thing that makes Iowa very dangerous is just that they have a very efficient post player (Czinano) that is No. 1 in the nation for field-goal percentage, so that’s a nice anchor down there. They surround Caitlin with so many shooters that as soon as you try to give some help or shade her or squeeze over to give a little more help she can find really good shooters and they can knock them down."

For Clark in the third quarter it was about getting great shots for teammates, and she had five assists in the quarter.

For long stretches of the game Nebraska got the score, it just didn’t get the stop. Then in the fourth quarter Nebraska got some stops and had a 13-0 run, but Iowa had a large enough lead to finish off the win.

Warnock added 19 points for Iowa (11-6, 7-6 Big Ten), which has had some inconsistency with a lineup that starts one freshman, three sophomores and a junior.

Nebraska has lost three straight to drop to 9-8 overall and 7-7 in the league.

“We showed some fight down the stretch, getting down 17 and cutting it back to a four-point game, but the truth is against a team like Iowa you can’t dig yourself a 17-point deficit,” Williams said. “We had a stretch there where we didn’t shoot very well from the perimeter. And we didn’t take advantage and get all of the points in the paint that we really wanted to, and it came back to bite us in a tough loss.”

Nebraska’s next game is Sunday against No. 9 Maryland, which has the No. 1 offense in the nation (91.5 points per game). 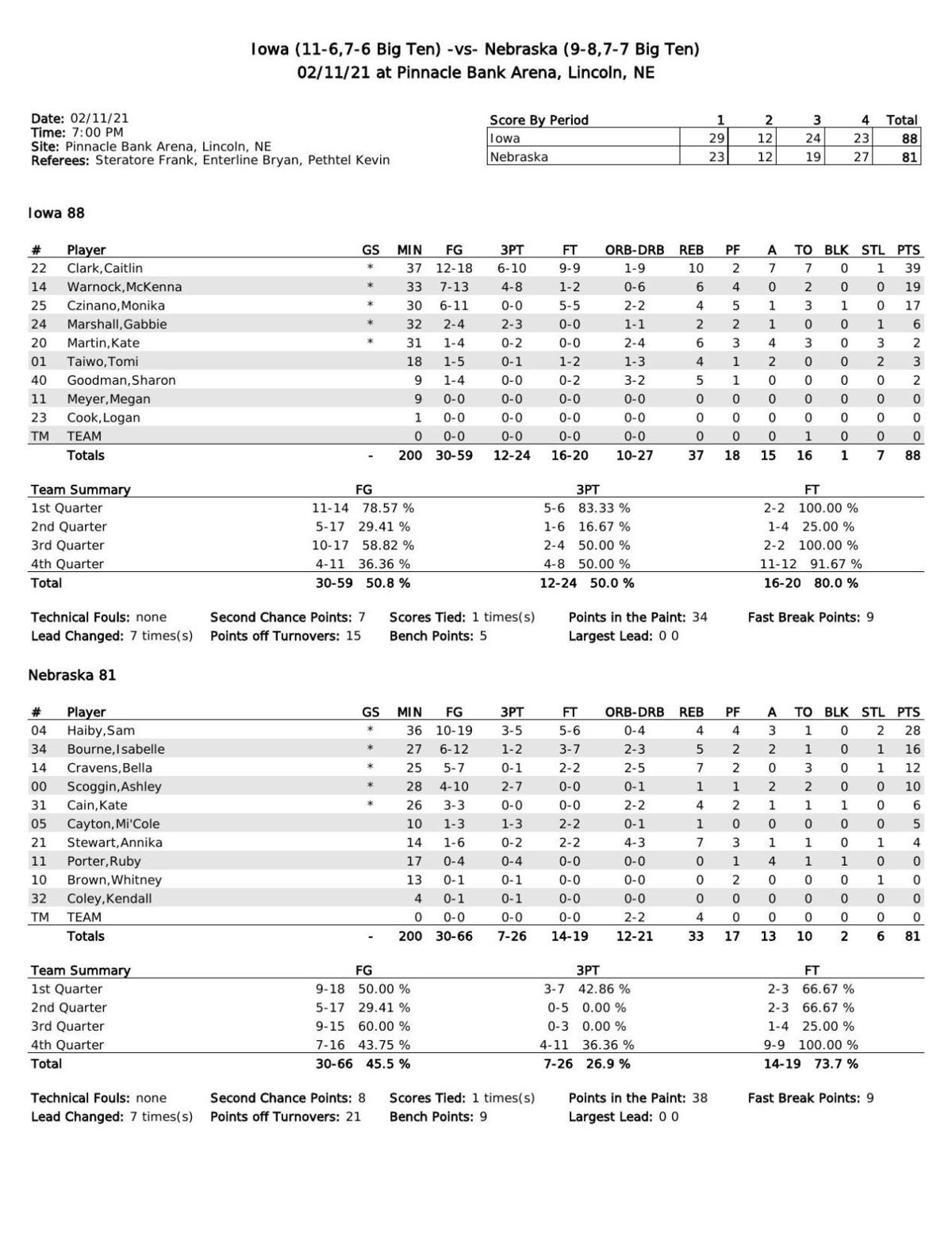 Brent C. Wagner takes a closer look at the Nebraska women's basketball team's matchup against No. 9 Maryland on Sunday.

For the second time in four days, Nebraska women will face one of the top offenses in the nation

During a stretch where the Huskers won four of five games, including wins vs. ranked teams, they rebounded well. Now it's time to get back to that.

'They can play all positions': Maryland's top-ranked, versatile offense looks the part in dominating win over Husker women

The Nebraska women’s basketball team saw everything that Maryland is right from the start of its game against the Terrapins on Sunday.

Iowa’s Caitlin Clark drives to the basket in the first half against Nebraska's MiCole Cayton on Thursday at Pinnacle Bank Arena.

Nebraska’s Ruby Porter (11) drives to the basket against Iowa’s Caitlin Clark in the first half on Thursday at Pinnacle Bank Arena.