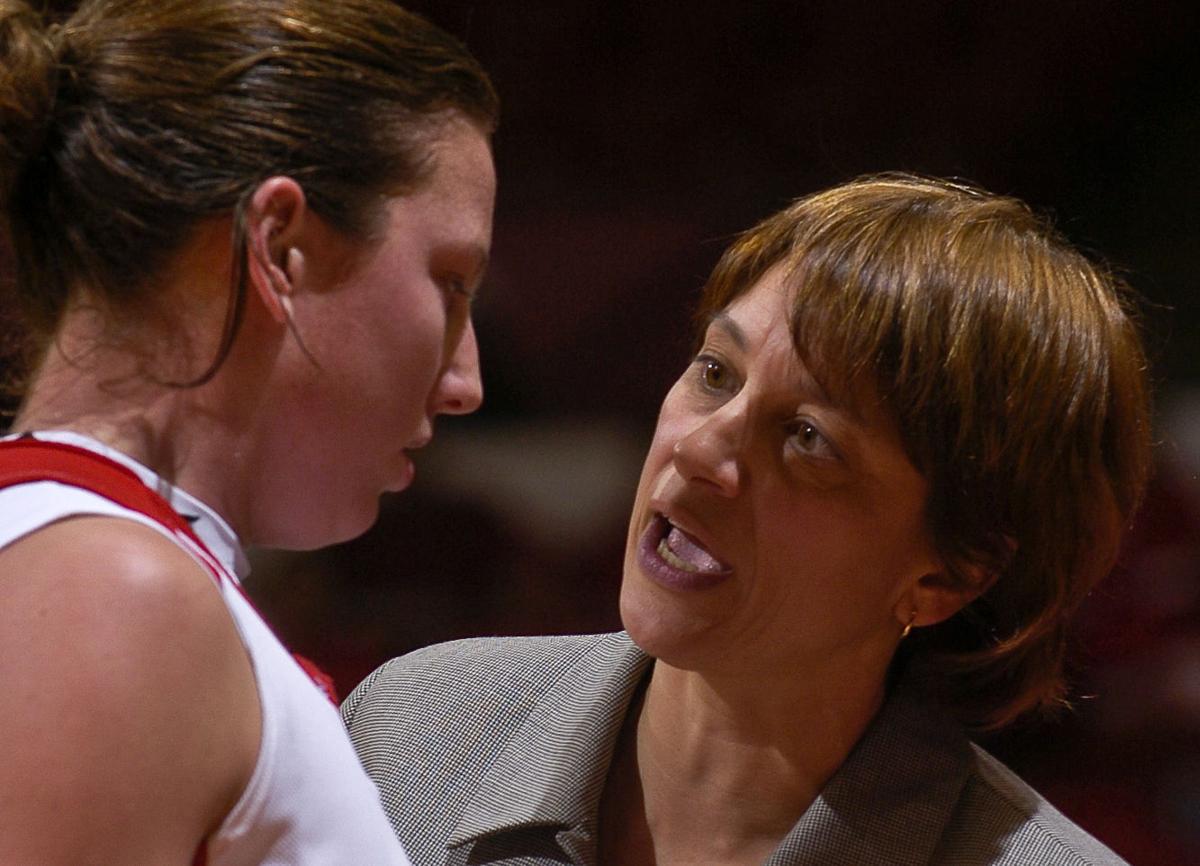 Ex-Husker standout Kesley Griffin said Connie Yori cared deeply about her players and would have done anything for them. 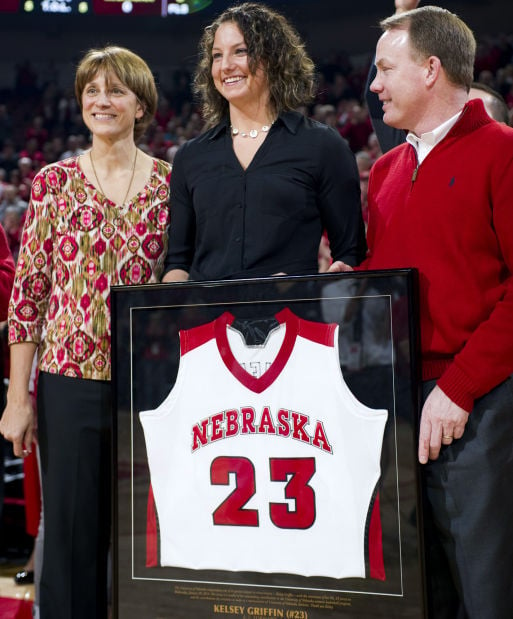 Former Husker player Kelsey Griffin (middle) is honored with the retirement of her jersey during a ceremony before Wednesday's game against Michigan at Pinnacle Bank Arena. Nebraska coach Connie Yori and NU athletic director Shawn Eichorst help honor Griffin, one of the best players to ever play for Nebraska.

One of the most decorated players in Nebraska women’s basketball history and the most accomplished of the Connie Yori era is among several former players to come to the defense of their former coach.

Kelsey Griffin, the program’s No. 3 all-time scorer whose No. 23 jersey was retired in 2014, said she was first saddened, then angered as she read about current player and staff allegations against Yori, who resigned Tuesday after 14 seasons.

“I had absolutely no idea,” Griffin said of a two-month-long investigation by the Nebraska athletic department into claims of bullying, intimidation, overtraining and general mistreatment as part of a negative, dysfunctional culture.

That isn’t the Yori that Griffin knows.

“Coach Yori cared deeply about her players and would have done anything for any one of us,” Griffin said by phone from Australia, where she’s a naturalized citizen and is training for the Australian women’s national basketball team.

“I wouldn’t be the person I am today if it wasn’t for her. I wouldn’t have the compassion, the leadership, or my degree.”

Griffin was a lightly recruited 6-foot-2 forward from Eagle River, Alaska, when she joined the program in 2005. She left Nebraska with career totals of 2,033 points (No. 3) and 1,019 rebounds (No. 2) while leading the Huskers to an undefeated regular season and Big 12 Conference championship in 2009-10.

Yori has called Griffin “a rare breed” who incorporated values of the program and handled adversity.

She also called Griffin the best player she’s ever coached.

“She took a massive risk on me,” Griffin said of Yori. “I wasn’t a highly recruited player. I dealt with a ton of homesickness. My junior year, my dad had cancer, she let me stay home longer over Christmas break to be with my family.

“It kills me when I read players feeling like she doesn’t care about them as people. That has never, ever been my experience. That’s why she does it, to help young women to grow.”

“She got the best out of her players by demanding excellence on and off the court,” Burke said. “She was truly invested in not only making us great individuals and team players but also fantastic women in the community and life."

Even male practice players for the women’s team this past season — Nathan Alexander, Nate Schlautman, and Sam Griess — had words of support.

“She's always going to get the most she can out of every girl,” Alexander said. “I didn’t think there was any bullying — nothing that I would perceive as bullying.”

Alexander said he didn’t want to speculate on why many members of the current team felt otherwise in approaching administration.

He especially took issue with reports correlating many injuries in Yori’s tenure to overtraining. If anything, Alexander said, Yori was lighter on players in practice this season and “reamed” the male practice players if they got too physical, tried to block shots or did something that may cause players injury.

Griffin, who battled through an injury-plagued career, also said Yori’s practices aren’t to blame for injuries.

“That’s just something that happens,” Griffin said. “Some people’s bodies can take it, and some people’s can’t. I’m blessed with a body that can handle it and you learn to manage it.”

Griffin admits she’s not been around the current players and staff members and stressed she doesn’t know their current situations and isn’t trying to demean or lessen anything they may be experiencing.

"I'm not trying to put words in their mouth," she said.

Griffin just felt she owed her former coach her support by sharing her positive experience.

“What I found is the older I get is how important intention is, so sometimes our actions may not come across as we want, but the intention is good and the intention is right,” Griffin said. “I feel that holds a lot of weight, at least to me personally. As long as I’ve known Connie, her intentions have been good. She means the best, and she wants the best.”

Aubry said she was “shocked” at the news of the investigation and Yori’s resignation. She remembers Yori as a coach who had love and support for her players.

Mi’Cole Cayton, one of five players who signed last fall to join the Nebraska women’s basketball team in 2016, said she will probably still be…

Former Nebraska women’s basketball coach Connie Yori will receive a severance package of about $1.2 million from the university after resignin…

Ex-Husker standout Kesley Griffin said Connie Yori cared deeply about her players and would have done anything for them.

Former Husker player Kelsey Griffin (middle) is honored with the retirement of her jersey during a ceremony before Wednesday's game against Michigan at Pinnacle Bank Arena. Nebraska coach Connie Yori and NU athletic director Shawn Eichorst help honor Griffin, one of the best players to ever play for Nebraska.