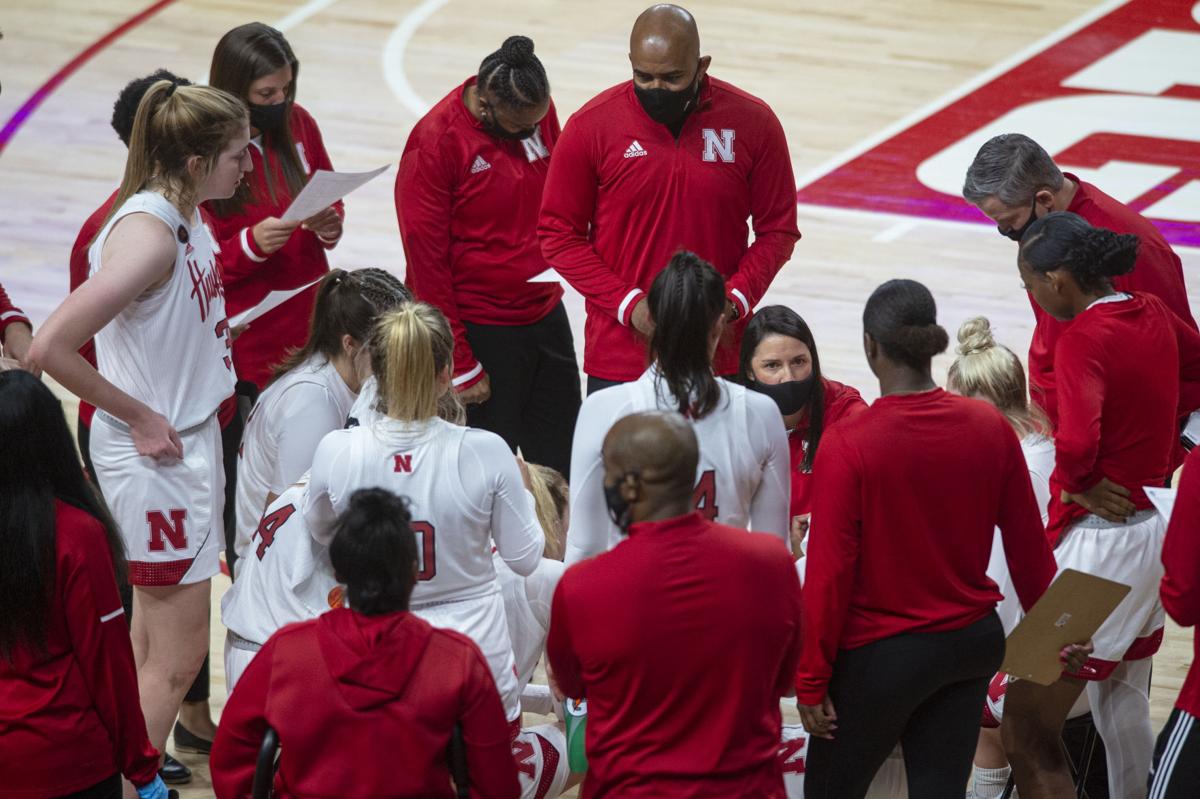 Nebraska coach Amy Williams talks to her team during a timeout in a Dec. 10 game against Illinois at Pinnacle Bank Arena. 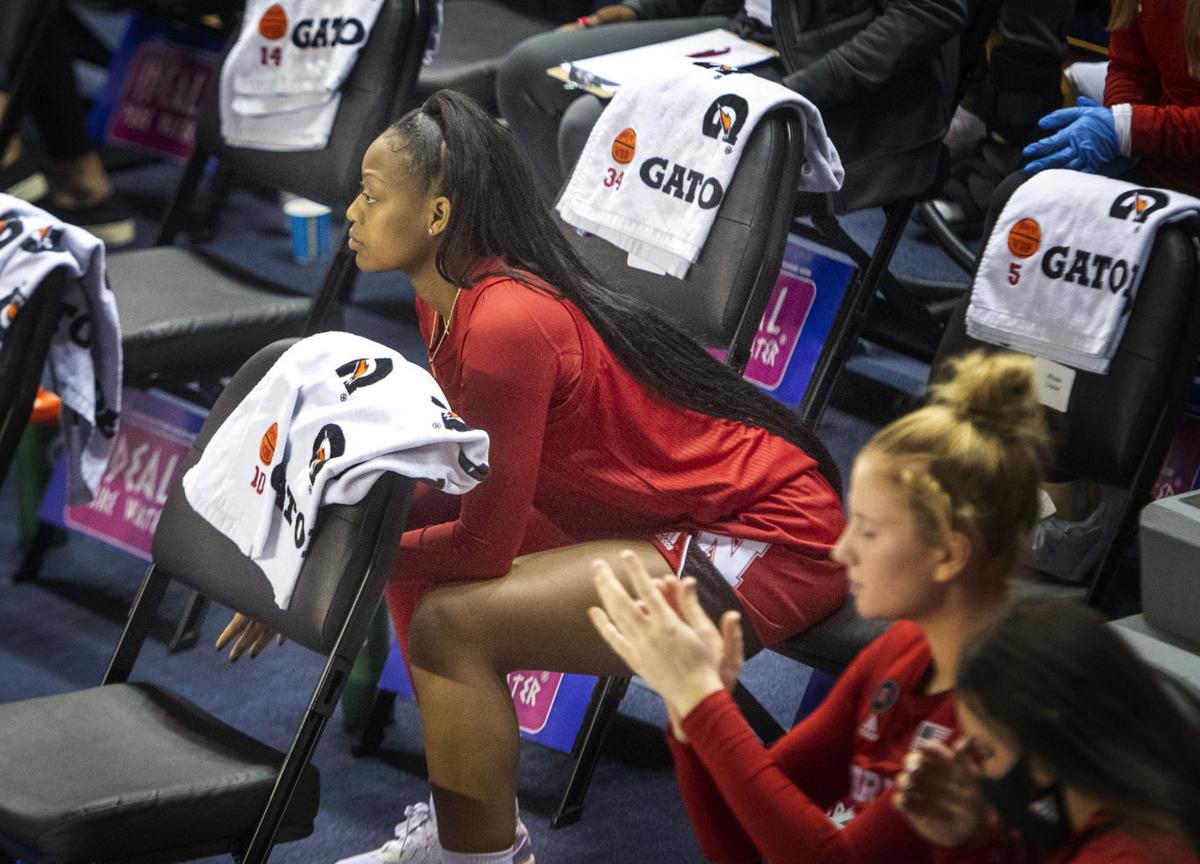 Nebraska's MiCole Cayton (center) looks on from an empty bench during a game against Creighton earlier this month in Omaha. Cayton hasn't been able to play due to offseason knee surgery, and Nebraska was down to seven available players in its past two games.

Adversity came early for the Nebraska women’s basketball team this season — and in a different form than expected.

Coach Amy Williams anticipated the adversity would be related to COVID-19. While Nebraska did play its first game a week later than planned due to COVID-19 reasons, the Huskers have played all six games as scheduled since then.

Nebraska has had only seven available players for its past two games. Rather than virus-related reasons, it's a long list of injuries and an in-season transfer that has put Nebraska in a tough spot. That’s after Nebraska had 13 players when it resumed practice this summer, and then 12 after Taylor Kissinger ended her playing career early due to injuries.

“I think this year we felt good about the 13 that we were heading into the season with,” Williams said. “And then I really thought there would maybe be a little adversity this season, but I thought maybe it would come more with COVID and things like that, and not as much in two season-ending hip injuries, two ankle injuries, a knee that hasn’t quite healed and some of the other things that we’ve faced up to this point.”

The Huskers’ roster size may not be an issue soon, potentially in a few weeks, if Ruby Porter and Trinity Brady are able to come back strong from ankle injuries, and MiCole Cayton gets cleared to play in games following offseason knee surgery. Even a few minutes from Cayton to help an overworked group of guards would be helpful.

With about 70% of the season remaining, Nebraska’s current roster situation isn’t favorable. Nebraska (3-3, 1-2 Big Ten) was outscored on points off the bench 32-0 in a loss to Purdue last week.

It’s impossible to have anticipated all of the bad things that have happened to the Huskers' roster over the past four months, but Williams had the option to go into the season with more players on the roster. College women’s basketball teams are allowed to have 15 scholarship players each season. Nebraska began the season with an estimated 12 players on scholarship, while still accounting for Kissinger, three under the limit.

Nebraska had already added seven players to the roster in the offseason with four transfers and three freshmen. Williams said she was fine with the roster size when the season began.

“We started the season with 13 players. That’s plenty,” Williams said. “That’s a very typical, full roster, but when Taylor Kissinger went down with season-ending hip injury, and then Nailah Dillard went down with season-ending hip injury after being granted a waiver to play immediately, there is two wing players that potentially could be starting wing players that are out of the picture right away.”

Adding Cayton to the roster came with some uncertainty about her availability, but she was a good player to take to add a former top-80 recruit who had college playing experience at California.

“We did not know with MiCole — I’ll be 100% honest with you — at one point she would be cleared and healthy, but when she does get clearance she’s a different player than what we have and could really bring something to the table,” Williams said. “I think beginning the season with 13 players on our active roster was something that we definitely felt like was plenty, and not uncommon across the country to have that type of a roster size.”

Creighton has 14 players listed on its roster. Northwestern has 13, and Purdue 15.

Porter was hoping to be able to practice on Wednesday ahead of Nebraska’s game against No. 15 Northwestern on Thursday, while Brady still can’t practice. Cayton can do some drills in practice but hasn’t been cleared for full-court play.

“(Cayton) has a few tests on the schedule in the near future, and if she can get to certain standards, that will help that along, but we’re not there just yet,” Williams said.

Roster management is a balancing act, and Williams has chosen to not use all 15 scholarships during each of her five seasons at Nebraska. That included Nebraska’s NCAA Tournament team in Williams’ second season (12 players on scholarship). The next season, after two players ended their careers early, Nebraska had 11.

The Husker men’s basketball team also had some roster challenges last season, and for its final game of the season was down to seven scholarship players and two fill-in players from the Husker football team.

What is Williams’ philosophy on roster size?

“I think 13 is a really good spot to be, 13 scholarship players if it’s the right people and players that you really feel like you have the right pieces,” she said. “I think that’s a perfectly fine number. I think sometimes when you have 15 players that are on scholarship at a Division I school they feel like, ‘Hey, I’m on full-scholarship at a Division I school' and there is a lot of expectations to be able to play. And I think it’s nearly impossible to be able to play 15 people the type of minutes that are going to leave people feeling excited about where they’re at.”

With women's teams able to bring in male practice players, some schools don’t fill as many roster spots just because they need extra players in order to scrimmage. But Williams also sees some programs are filling up their rosters now, knowing that after each season players could transfer and leave a team shorthanded. Nebraska had three players transfer after last season, but none the previous year.

“Now coaches are starting to feel a little more apt to carry larger rosters, or closer to the true number just because of not knowing when players are going to leap into that (transfer) portal,” Williams said.

Nebraska’s roster size should improve next season when it adds five freshmen who make up a top-25 recruiting class.

Nebraska last played on Dec. 23. The players had the option to go home for Christmas for about three days. After returning to Lincoln, the players had to be tested for COVID-19 for three days before being able to resume practice Wednesday.

No. 15 Northwestern at Nebraska

During Sunday's loss to Indiana, Nebraska had just seven players available due to injuries. But coach Amy Williams doesn't want to use that as an excuse.

The Minden native faced setbacks during her rehabilitation following surgery, and her participation was limited this summer.

A closer look at the Nebraska women's basketball team's matchup against Northwestern.

Bourne got the tough assignment of guarding Rutgers’ Arella Guirantes for most of the game. Guirantes is the leading scorer in the Big Ten.

With two close wins in a row, Nebraska gets another test at No. 15 Michigan, which has a high-scoring player familiar to the Huskers.

The Husker women are rolling against ranked teams. Now, an interesting stretch begins as NU plays four teams at the bottom of the standings.

Nebraska coach Amy Williams talks to her team during a timeout in a Dec. 10 game against Illinois at Pinnacle Bank Arena.

Nebraska's MiCole Cayton (center) looks on from an empty bench during a game against Creighton earlier this month in Omaha. Cayton hasn't been able to play due to offseason knee surgery, and Nebraska was down to seven available players in its past two games.