Subscribe
Read Today's E-Edition
Share This
After roster, coach shakeup and win vs. Gophers, NU women are going to focus on future, Williams says
0 Comments
Share this
1 of 2 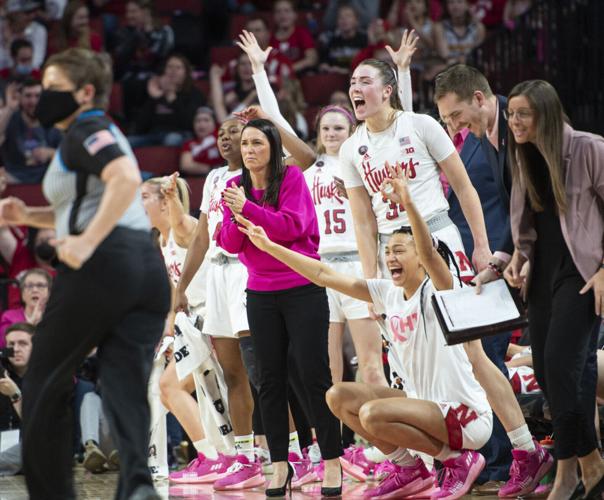 Nebraska coach Amy Williams (middle) and her players celebrate a late basket against Minnesota on Sunday at Pinnacle Bank Arena. 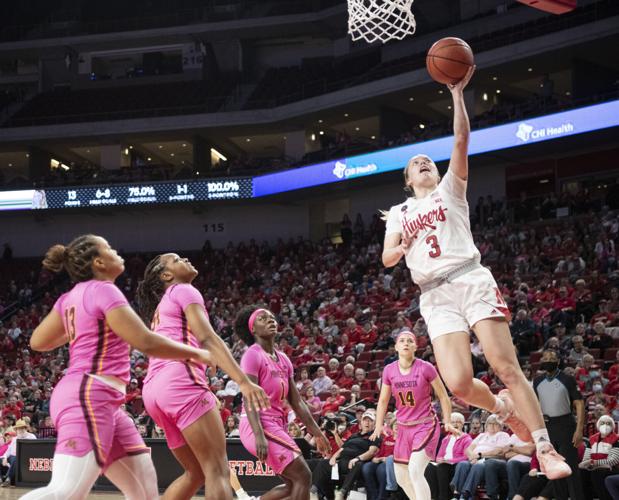 What Nebraska women’s basketball coach Amy Williams described as a challenging few days ended with a milestone win for the Huskers.

With a 93-70 victory against Minnesota on Sunday at Pinnacle Bank Arena, Nebraska reached the 20-win mark at 20-7. The Huskers got there after a 12-game winning streak to start the season, along with a couple of massive upsets of Michigan and Indiana during Big Ten play.

After big win against No. 5 Indiana, a 'tough loss' for Husker women as Penn State rallies late

It was the highest-scoring game for Nebraska in conference play. The Huskers improved to 14-1 at home with just one more home game to go.

Nebraska led by seven points at halftime, and then dominated the Gophers 30-13 in the third quarter to turn the game into a rout.

It's the second 20-win season in Williams’ six seasons as Nebraska coach, but the first time it’s happened with at least three weeks left in the season.

Nebraska shot 10-for-21 on threes, led by Weidner making all three of her attempts. Weidner blew past her previous season-high of 14 points.

Isabelle Bourne added 17 points for the Huskers, and Alexis Markowski had 15 points and nine rebounds.

This was the first game since Saturday’s news that associate head coach Chuck Love and starting guard Ashley Scoggin are no longer with the team.

Love was suspended with pay for a "personnel matter" and isn’t expected back. Scoggin was removed from the roster.

Those changes came about quickly. On Tuesday, Love filled in for Williams on the women’s basketball radio show, and by Thursday evening he wasn’t coaching.

During her normal news conference after the game, Williams was polite with reporters and responded to each question over a period of about 10 minutes, but provided few added details.

She wouldn’t say who made the decision that Scoggin is no longer on the team.

“That’s just a question that right now I’m not answering,” Williams said. “I think it’s something that there is lots of people that have been involved, and we’re just going to keep it at that.”

She also wasn’t definitive when asked if she feels comfortable in the process that led to Scoggin being removed from the team.

“All of those things are questions that at this time I can’t really answer,” Williams said. “We’re going to keep our focus on the team that we have moving forward.”

She said Scoggin is still being supported by the NU Athletic Department, which should mean she can remain on scholarship and receive other resources provided to athletes.

Williams is hopeful that this won’t hurt the program going forward, including in recruiting.

“I think our program is going to keep moving forward and we have a lot of positive things to be proud of as a group and we’re going to continue to build for the future,” she said.

Nebraska’s players have had a lot to process over the past four days while also playing two games.

“Coach (Williams) always says her favorite song (is), 'Can You Stand the Rain,' and this is definitely a storm for us,” Nebraska junior Sam Haiby said. “So I think it’s just really important for us to stay together. We’ve talked as a team and we’ve met with the players.”

To outsiders it appeared that team chemistry is strong this season, and Williams agreed with that.

What will Williams do to try and maintain that chemistry after division on the team?

“We’re going to continue to just foster the relationships that have been strong,” she said.

During a big third quarter Sunday, Markowski went to work inside for a couple of baskets. Another freshman, Kendall Moriarty, scored five points in the third quarter. Shelley found Moriarty with a great pass for an open three-pointer in the corner that Moriarty drained.

Of Nebraska’s 30 points in the third quarter, 18 were scored by freshman.

Shelley’s 12 assists are tied for ninth-most in a game in program history.

“Twelve assists is huge playing the point guard position when you’re sharing the ball like that,” Haiby said. “We know she’s a great passer.” 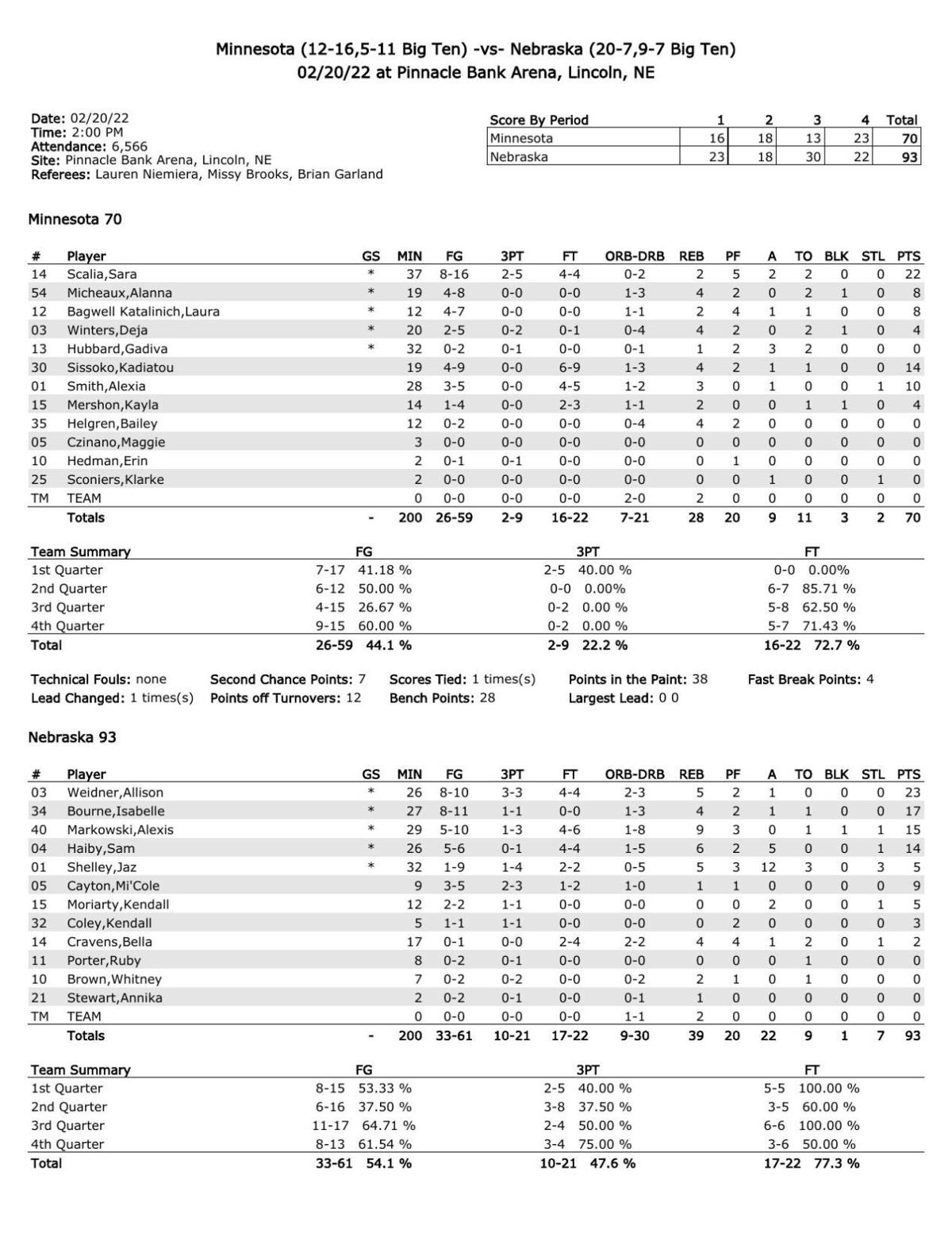 Photos: Husker women return to the PBA hardwood for clash with Gophers

'They can’t guard you': How depth was key in one of most significant wins in 48 seasons of Nebraska women's basketball

On Monday, the Huskers again showed that their success comes from the sum of their parts rather than a star player or two.

Well before latest triumph — an upset of No. 5 Indiana — Huskers had 'a hunch' this would be a special season

Nebraska was relentless at attacking the basket for long stretches of the game, including a 17-0 run in the fourth quarter to down the Hoosiers.

How one year changed the way Alexis Markowski plays basketball

Alexis Markowski plays with more fire and emotion than some Nebraska women’s basketball players have.

Nebraska athletic director Trev Alberts says he enjoys the challenges of the job. He also emphasizes that he works with "a great team of people." But, man, he's had a demanding first seven months on the job.

This is the 15th week for the award this season and Markowski has got it seven times, including five of the past seven weeks.

There were highs (beating No. 5 Indiana) and there were lows (suspending a coach; losing a player) for Nebraska last week. So now what?

With just one more regular season game remaining, Nebraska will finish above .500 in the league for the first time in the past three seasons.

Alberts shows support for Amy Williams after roster shakeup: 'It's been a challenging time'

The Husker athletic director didn't talk specifics — "these are a (human resources) issue" — but he did express support for the program.

Sometimes, one big stretch can define a game. MiCole Cayton has been in the middle of a few of those as a "spark" off the bench for the Huskers.

'The least we can do': Husker women finish off strong home season with 73-59 win over Northwestern

NU finishes 16-1 at home, tying a school record for home wins. It’s the fourth time Nebraska has won 16 home games in a season.

U.S. swimmer rescued by coach after fainting at world championships

Nebraska coach Amy Williams (middle) and her players celebrate a late basket against Minnesota on Sunday at Pinnacle Bank Arena.