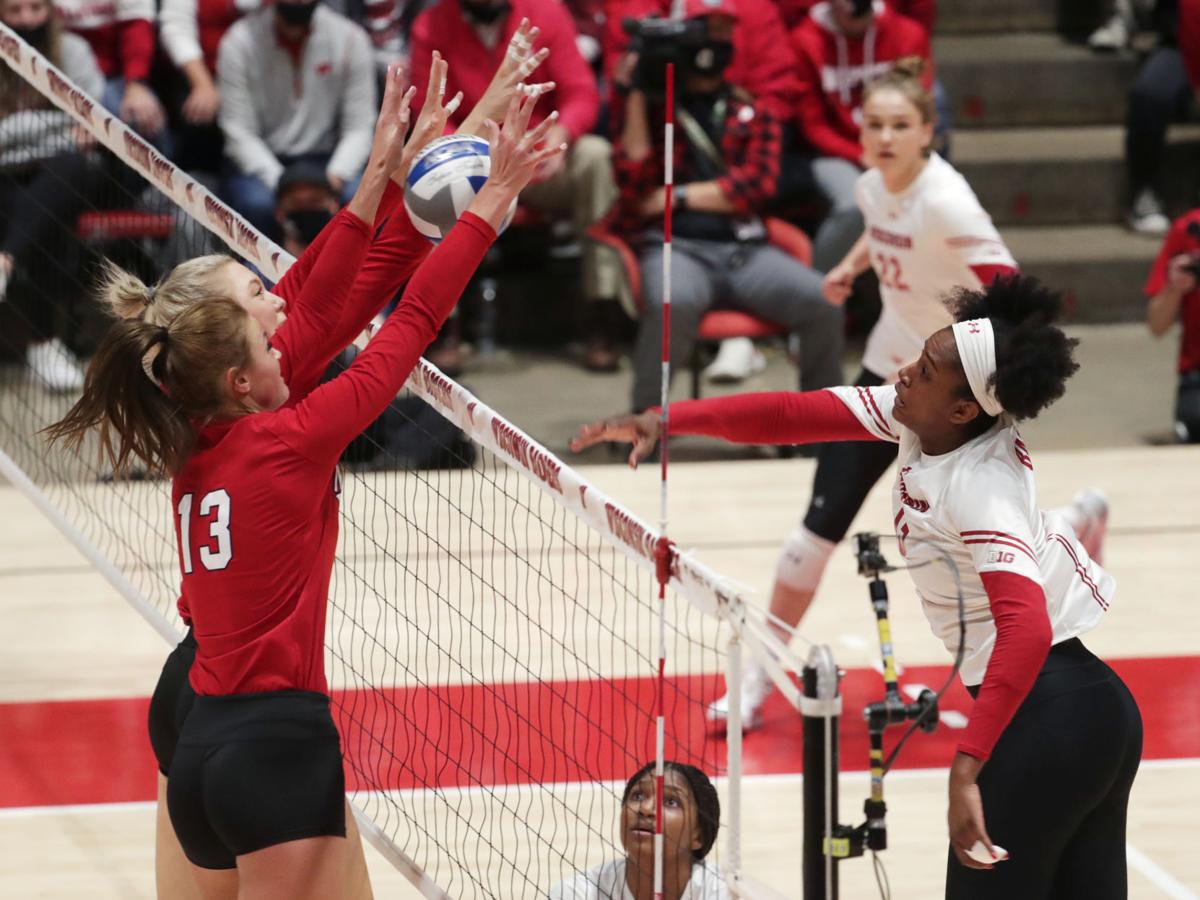 Wisconsin's Devyn Robinson (10) hits the ball against Nebraska's Whitney Lauenstein (13) and Lauren Stivrins (26) in the second set Friday at the UW Field House in Madison, Wis. 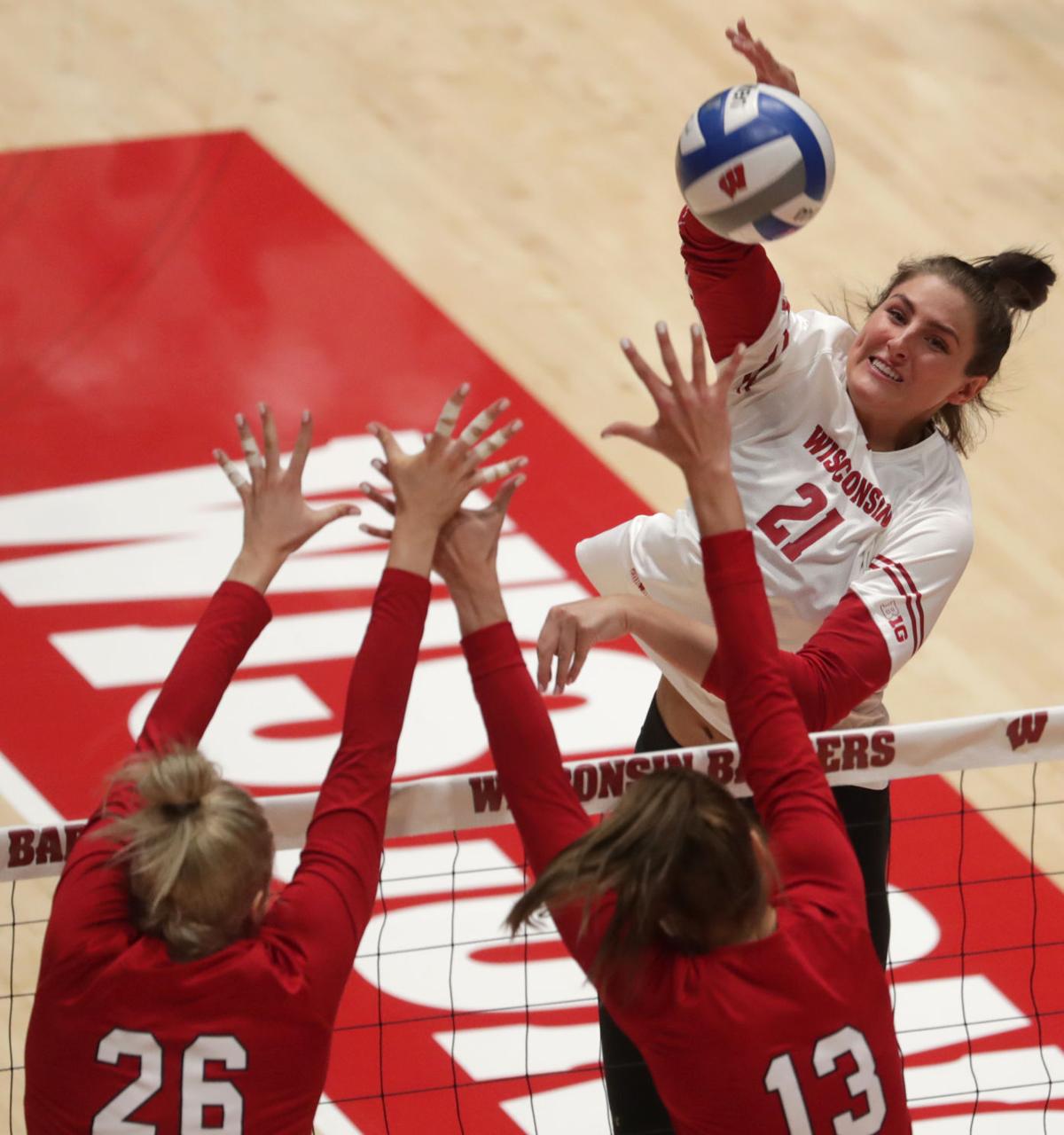 Wisconsin's Grace Loberg (21) hits the ball against Nebraska's Lauren Stivrins (26) and Whitney Lauenstein (13) in the first set Friday at the UW Field House in Madison, Wis. 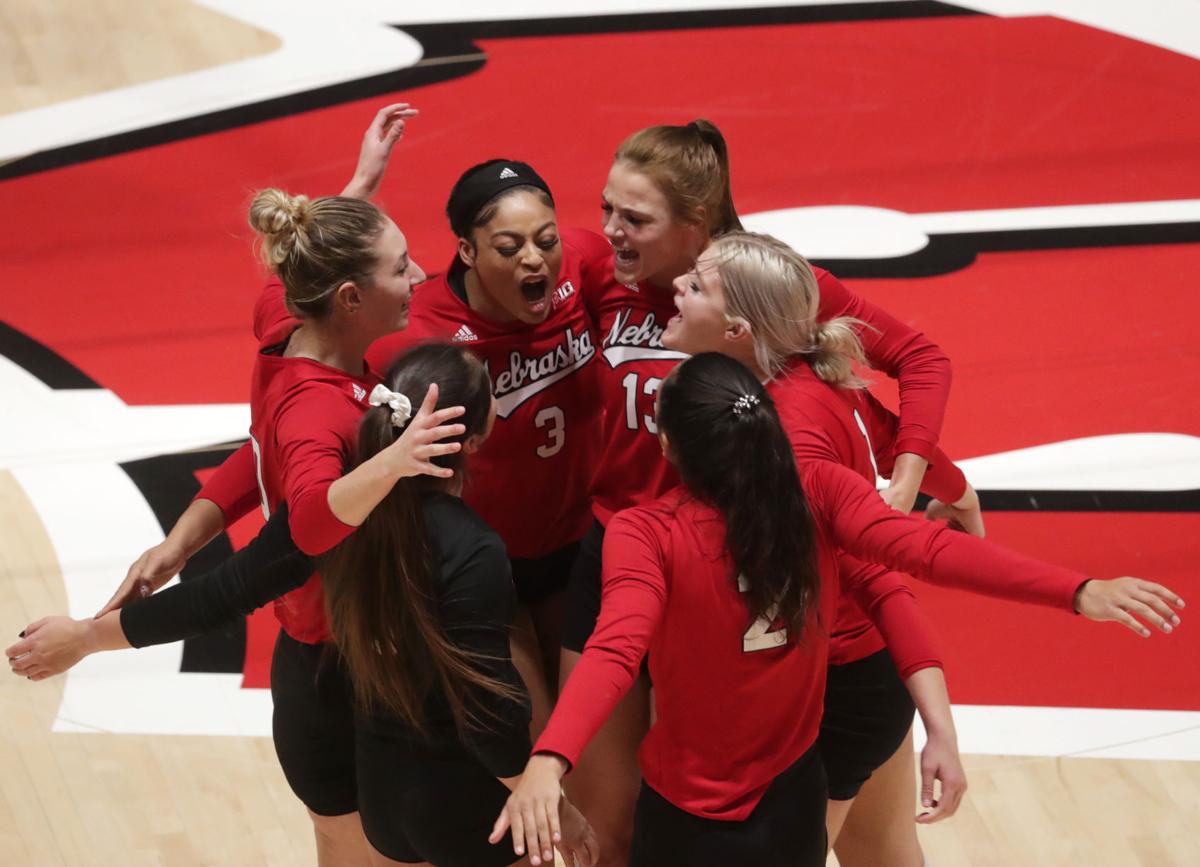 Nebraska players celebrate a point in the first set of a match against Wisconsin on Friday at the UW Field House in Madison, Wis.

Friday’s match between Wisconsin and Nebraska was the unofficial Big Ten championship match this year, as the winner would clinch at least a share of the conference title.

So when Dana Rettke’s final kill touched the floor to finish Wisconsin’s four-set win, the Badgers celebrated a championship. There were championship T-shirts slipped on quickly by the players, who then celebrated with a trophy.

So, in the end, Nebraska’s troubles in Madison, Wisconsin, continue, and Nebraska’s Big Ten title hopes were reduced to a long shot.

'This is why you come to Nebraska:' After early slide, Huskers have shot to win Big Ten title

Nebraska (20-7, 15-4 Big Ten) would need a win against No. 6 Purdue on Saturday and a Wisconsin loss against 12th-place Indiana to be Big Ten co-champions.

Rettke had 18 kills with a .484 hitting percentage to lead the Badgers. She also had seven blocks and keyed a Wisconsin comeback with 16 kills as the Badgers won three straight sets.

Wisconsin had a .225 hitting percentage and held the Huskers to .168 hitting.

Nebraska’s strong start to the match had a lot to do with its serving. Nebraska served four aces in the set, including three from Keonilei Akana. Nebraska ended the first set on a 6-0 run that included three ace serves from Akana.

In the second set, Nebraska led 17-14, but the Huskers couldn’t hold on. That allowed the Badgers to tie the match and take back the momentum Nebraska had gotten on the road.

Nebraska had a couple of serving errors late in the set.

“You can’t give them life when you got them down on the road at Wisconsin,” Cook said.

The third set was close, too. But at the end of the set, Wisconsin got two big kills from 6-foot-9 Anna Smrek and 6-8 Rettke.

Needing to win the fourth set to extend the match, Nebraska got off to a bad start because of poor passing. The Badgers took leads of 5-1 and 9-4 and finished off the win.

Wisconsin has won seven straight in the series, dating back to Nebraska’s 2017 national championship season. The Badgers’ 2017 recruiting class has been successful against the Huskers. Sydney Hilley, Loberg and Rettke — each top-20 national recruits — have a 7-1 record against Nebraska.

Madi Kubik had 15 kills, but she was the only Husker with double-digit kills.

“We got to find other ways for people to get kills,” Cook said.

Lauren Stivrins added nine kills, and Kayla Caffey had seven. Lexi Sun had seven kills, but also seven hitting errors, to hit .000. Whitney Lauenstein started at right-side hitter. She had a strong start to the match, but didn’t get as many kills over the final two sets and finished with six kills. 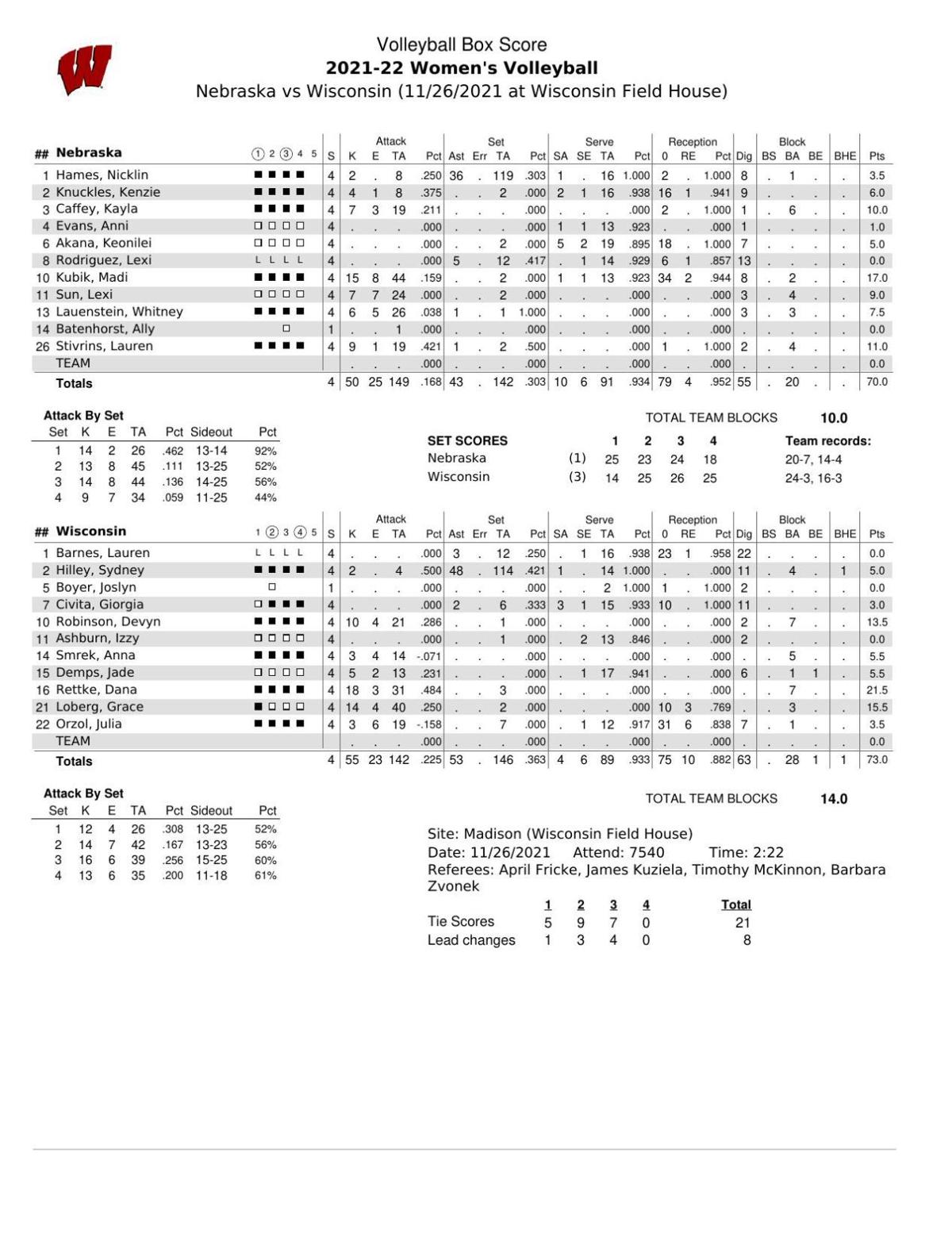 NU women's basketball coach Amy Williams said it was fun to work with the volleyball program in recruiting Maggie Mendelson. Here's how it worked.

Once Kayla Caffey started visiting schools as a college student, she knew she was in the right place.

Husker volleyball notes: The middle blocker position could look different next year; Kubik sisters 'so excited' to team up

Depending on how offseason decisions shake out, Bekka Allick is one candidate to step in and immediately vie for playing time in the middle.

'They should feel really proud': Nebraska finishes regular season with win against No. 6 Purdue

The Nebraska volleyball team will go into the NCAA Tournament with one of its best wins of the season.

Huskers earn No. 10 seed for NCAA Tournament, will host Campbell on Friday

“That’s why we work so hard to try and be able to host first and second round. That’s a big deal,” Nebraska coach John Cook said.

Wisconsin's Devyn Robinson (10) hits the ball against Nebraska's Whitney Lauenstein (13) and Lauren Stivrins (26) in the second set Friday at the UW Field House in Madison, Wis.

Wisconsin's Grace Loberg (21) hits the ball against Nebraska's Lauren Stivrins (26) and Whitney Lauenstein (13) in the first set Friday at the UW Field House in Madison, Wis.

Nebraska players celebrate a point in the first set of a match against Wisconsin on Friday at the UW Field House in Madison, Wis.