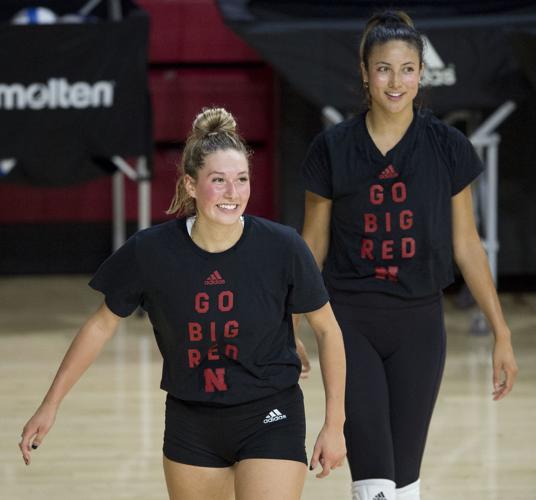 Nebraska's Madi Kubik (left) and Lexi Sun participate in the volleyball team's second practice of the season Aug. 10 at the Devaney Sports Center. 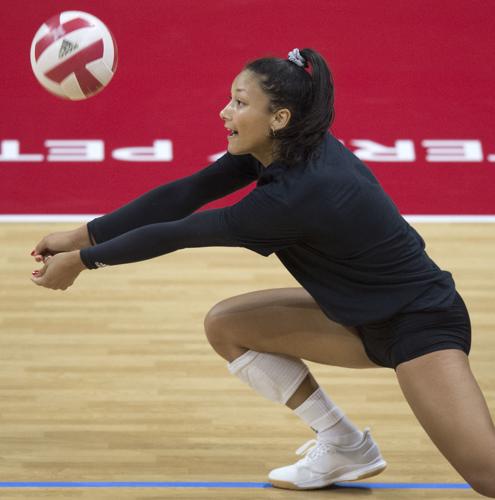 Nebraska's Kenzie Knuckles digs out a shot Aug. 10 during the volleyball team's second practice of the season at the Devaney Sports Center. 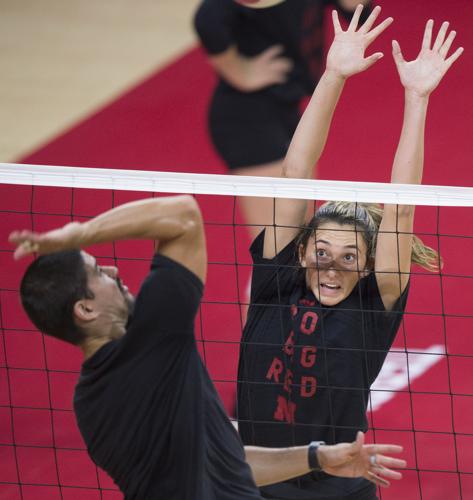 There were some restless nights for coach John Cook leading up to the first practice of the season for the Nebraska volleyball team last week, but that was a good thing.

Now in his 20th season as Nebraska’s head coach, and 27th as a college head coach, Cook said it’s usually that way before practice begins.

“But I think the last few years it’s gotten worse,” Cook said. “Or I’ve gotten more excited and looking forward to it. I’ve said the last couple of years that I’m probably having more fun coaching than I ever have.”

This has been one of the most successful stretches in program history. The Huskers have reached the NCAA Tournament Final Four each of the past four years, and won two national championships and two Big Ten Conference championships during that stretch.

There are some big questions to start the season with the graduation of Mikaela Foecke and Kenzie Maloney, however. Where does that production come from this season, or in what areas can the team improve to make up for that?

But there is also a lot to like with returning starters Lauren Stivrins, Callie Schwarzenbach, Lexi Sun, Jazz Sweet and Nicklin Hames. And a couple of freshmen who will likely be starters in outside hitter Madi Kubik and libero Kenzie Knuckles who enrolled early and already have been part of the program for seven months.

“I like this team and I want to do a great job for them,” Cook said. “They’ve earned my respect and I want me and our staff to do a great job of coaching these guys because I think they’ve warranted us to have a great effort. That’s the part that keeps me up, and then the excitement of training and seeing what they can do.”

The team is one week into practice. Nebraska got extra practice in advance of its summer trip to China and Japan, and it's made a big difference. The freshmen already know the practice drills and the team has been able to practice really hard.

What, specific to this group of players, has Cook excited to start the season?

“I think we have a shot to play at a really high level,” Cook said. “And I think this group, even though it’s a young group, there is some experience in there, and I think we have a chance to really play great system volleyball like we train, because they’re going to get a lot of time and a lot of reps on it.

“They’ve already had a lot of time and reps. So I just feel like that group is going to have a great understanding of how to play, and how to win. For me that’s probably the most exciting thing is they have a really good chance to play high-level Nebraska volleyball.”

Libero competition: Knuckles is the leader to be the starting libero in a competition that also includes Megan Miller and Hayley Densberger. What is Knuckles good at?

“She’s an elite passer, which is maybe the most important skill for a libero,” said Nebraska assistant Kayla Banwarth, who coaches the defensive specialists. “She reads the game really, really well and she’s very, very athletic. She can cover a lot of court.

“Besides being a great passer, she’s also a great defender and that comes from her reading ability. We’re working on her becoming more of a vocal leader and taking charge a little bit more, but she’s a freshman and that will come with time.”

Red-White match set for another large crowd: As of Friday, about 7,000 tickets have been sold for the Red-White Scrimmage, which is Aug. 24 at 6 p.m. at the Devaney Sports Center. There are still tickets for sale.

Last year, when Nebraska unveiled the banner for the 2017 national championship, the scrimmage sold out for the first time with a crowd of 7,965.

After one season as professional volleyball player, Kelly Hunter rejoins Huskers to get closer look at coaching

We won’t know exactly how good the Nebraska volleyball team is until December, and it will be really difficult to be better than last year, wh…

Nebraska's Madi Kubik (left) and Lexi Sun participate in the volleyball team's second practice of the season Aug. 10 at the Devaney Sports Center.

Nebraska's Kenzie Knuckles digs out a shot Aug. 10 during the volleyball team's second practice of the season at the Devaney Sports Center.