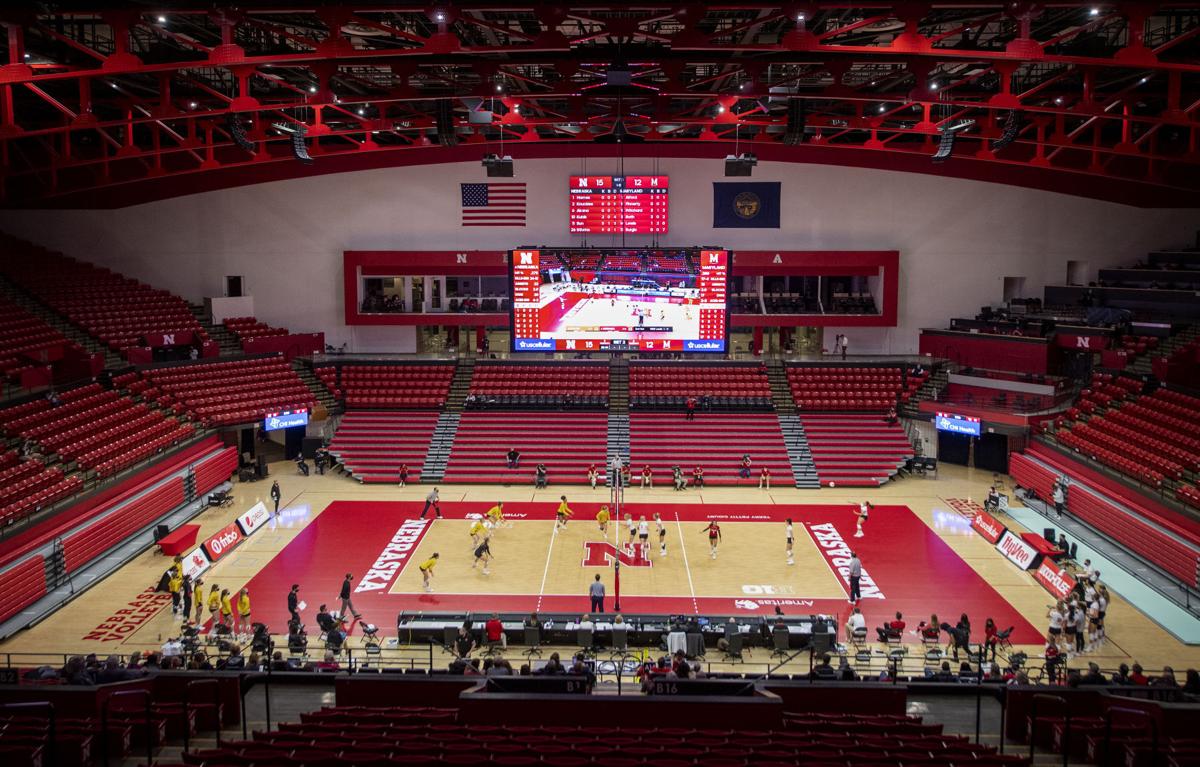 Nebraska serves in the second set against Maryland in a nearly empty Devaney Sports Center on Feb. 5. 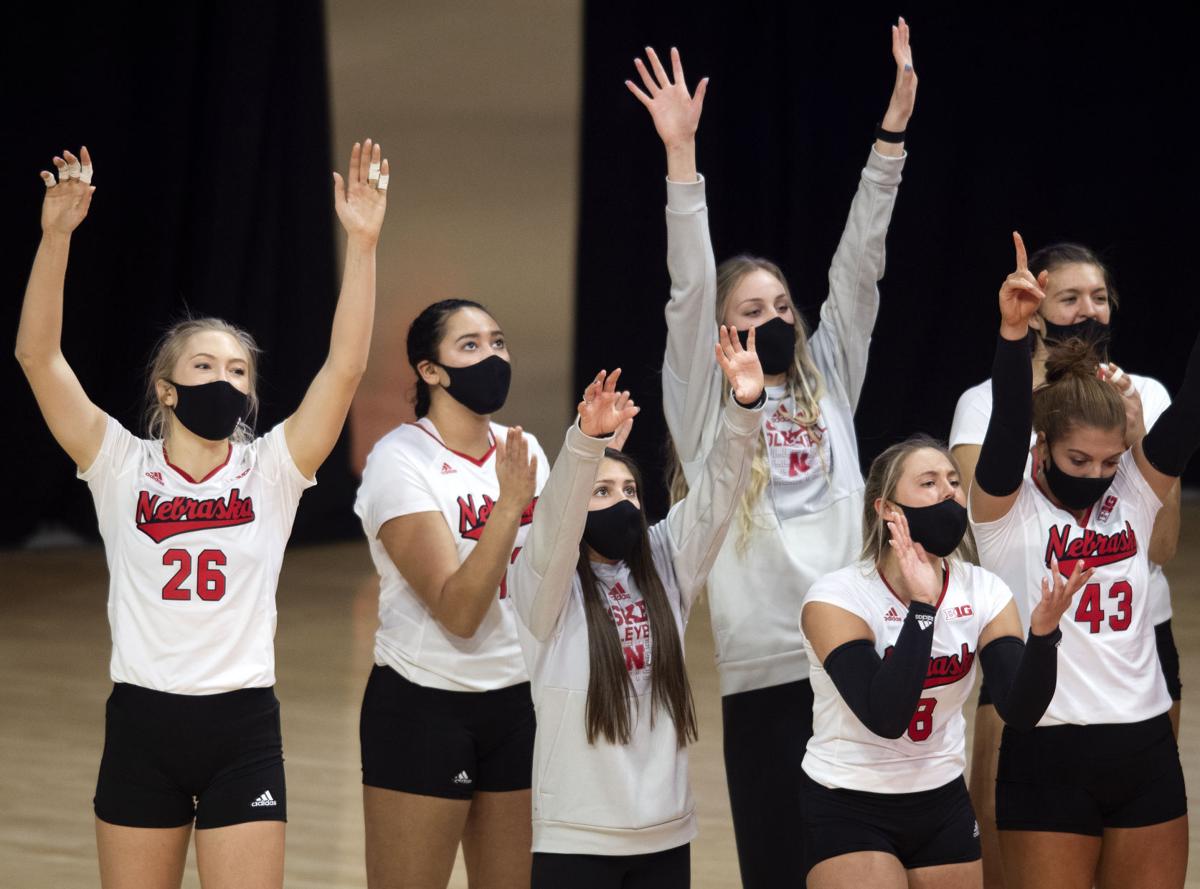 The Nebraska bench, including nonplaying freshmen Lexi Rodriguez (front row) and Ally Batenhorst (back row), celebrate a kill during a match against Maryland on Feb. 5 at the Devaney Sports Center.

When the Nebraska volleyball team played its first home match of the season six weeks ago, one of the takeaways was that this may be even harder than we thought because of the absence of fans.

That’s probably especially true for the Huskers, who are used to getting so much energy early during a match, and then a late push in a close match, from their 8,000 supporters at the Devaney Sports Center.

For the first time in decades, the Huskers are playing home matches without thousands of fans watching due to Big Ten rules in place due to COVID-19 limiting the crowd to mostly the families and some friends of the players and staff. The families are seated in the second level above the team benches.

Coming off a loss, Huskers show 'good resilience' behind Sun, Kubik in sweep of Iowa

"I don’t think it ever feels any more regular," Kubik said. "I just feel like I miss playing in Devaney when it feels like Devaney. But I think we’ve got better as a team being able to bring our own energy and recognizing that we’re not going to get it from 8,000 fans."

Fifth-ranked Nebraska also played Iowa (3-12) on Wednesday, with the Huskers winning 3-0 on the road.

Nebraska’s first home match, against Maryland on Feb. 5 was eerily quiet. Lauren Stivrins said you would have been able to hear a penny drop. Because it was so quiet the TV announcing crew could be heard at times talking during the broadcast in the sections near the TV booth.

Since then, Nebraska’s fan experience staff has broken up the silence by playing short clips of music between each point, which has helped.

Nebraska has a 4-2 record at home, with losses against No. 5 Minnesota and No. 11 Ohio State.

Nebraska coach John Cook said there is a void this season without fans. In both defeats Nebraska lost the first set.

“I’m just wondering if it’s such a letdown not having the crowd, and if that’s effected our energy and our starts,” Cook said. “So we’re going to try to address that a little bit. I don’t think there is any magic formula. It feels empty and there is something definitely missing. That’s not an excuse, it’s just the reality.”

There have been a few matches this season — the Sunday morning sweep against the Gophers and a five-set win against Ohio State — when you were left thinking about how Devaney would have been rocking with some thrilled Husker fans during those matches.

"I was actually sitting there in set five (against Ohio State) like, 'If we had 8,000 people in here, how fun would this be?'" Cook said. "It’s still fun, but I feel bad for the fans missing out on a great five-set matches that comes down to the wire."

Stivrins takes control: During last Friday’s five-set win against Ohio State, the Huskers fell behind 0-2 in the match, before winning the final three sets to take the match.

During the short break between the second and third sets when the Huskers return to the locker room, Cook said Stivrins did most of the talking.

The fifth-year senior and co-captain is motivated to lead the Huskers to a special season, and it’s shown in both her play and how she leads the team.

While Stivrins’ message to the team may be similar to what the coaches would say, it can have a different impact coming from her.

"We try to work on having a player-driven culture, and that makes us more successful," Kubik said. "When it comes from coach (Cook) it obviously carries a lot of weight. But coming from each other there is a certain accountability level that means a lot, and we want to play for the person next to us. When it comes from (Stivrins) it means a lot."

"Oh, yeah," he said. "She has free rein. She’s a captain of this team and that’s part of her role and what’s expected of her."

Iowa at No. 5 Nebraska

Yes, the guys are talking NCAA hoops. Plus, a look at Nebraska basketball's roster movement — and the latest football chatter.

Drewnick, who opted out of this season in January, faced stiff competition at the setter position with Nicklin Hames and No. 1 recruit Kennedi Orr.

Classic comeback: No. 4 Husker volleyball team roars back from 2-0 deficit to defeat No. 11 Ohio State

Middle blocker Lauren Stivrins had 18 kills, six blocks and smashed the kill on match point. Lexi Sun had 17 kills, including three big ones in the fifth set, and two blocks.

The senior outside hitter posted 4.33 kills per set with a .408 hitting percentage in two sweeps against Iowa last week.

Nebraska serves in the second set against Maryland in a nearly empty Devaney Sports Center on Feb. 5.

The Nebraska bench, including nonplaying freshmen Lexi Rodriguez (front row) and Ally Batenhorst (back row), celebrate a kill during a match against Maryland on Feb. 5 at the Devaney Sports Center.