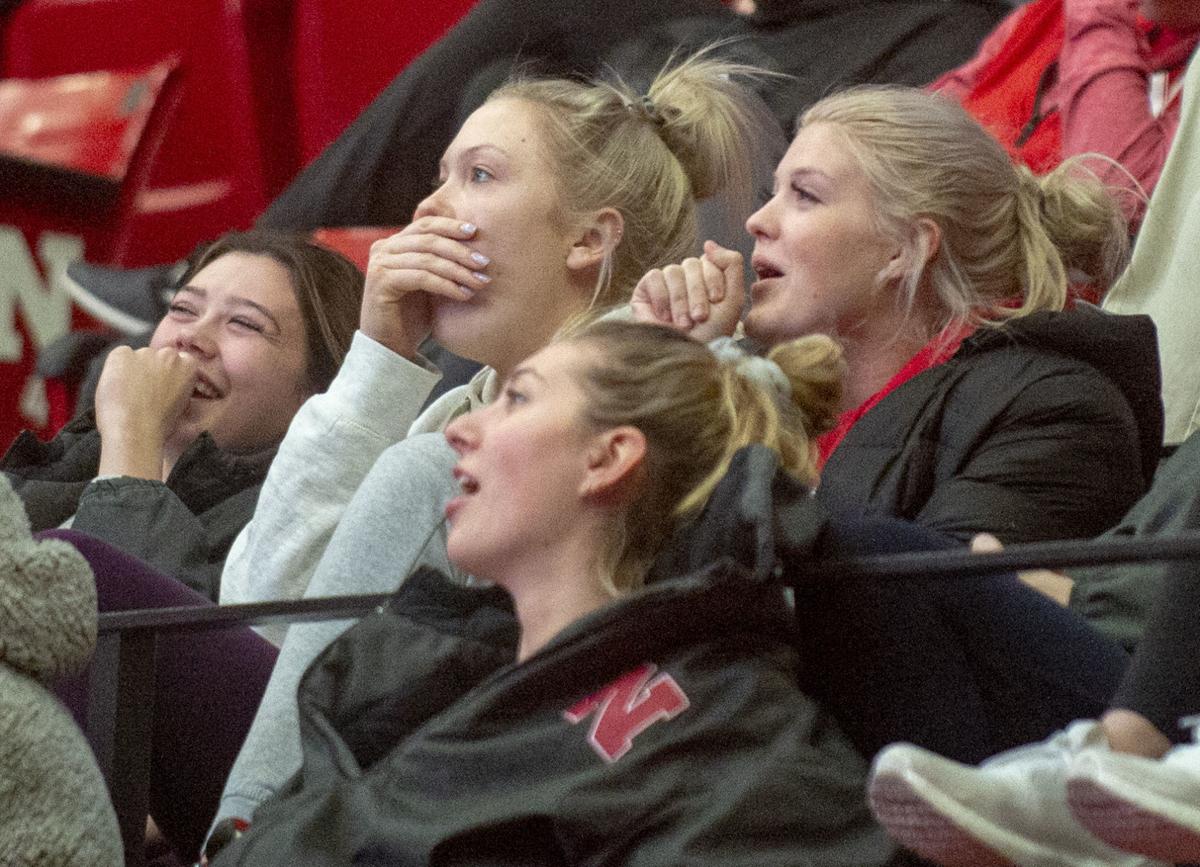 Nebraska’s Lauren Stivrins (second left) is surprised after being complimented during the NCAA volleyball tournament selection show at a watch party at the Devaney Sports Center on Sunday. Nebraska earned the No. 5 overall seed in the NCAA Tournament and will face Ball State at home on Friday. 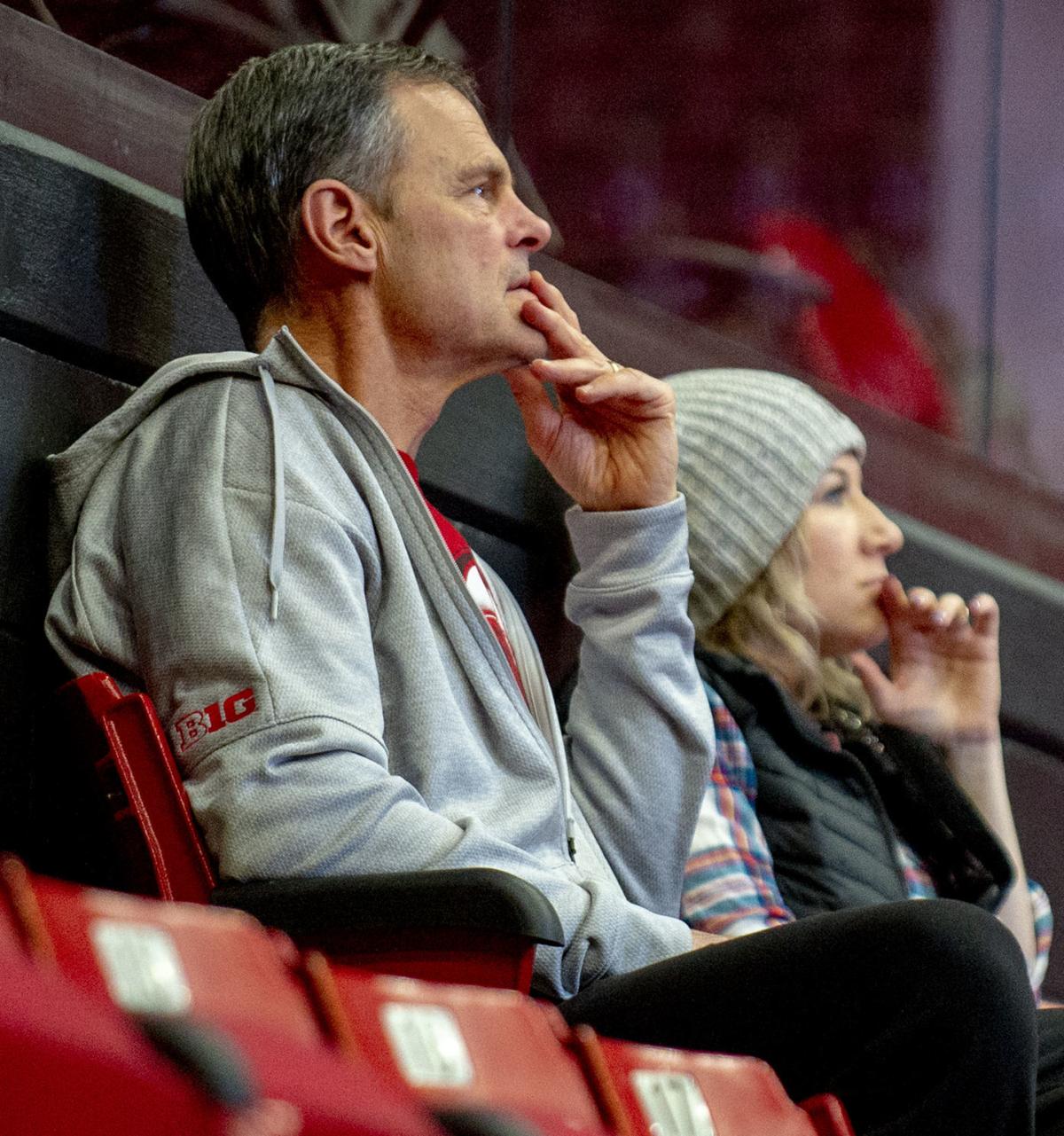 The beauty -- and stressful part -- about the NCAA volleyball tournament is that the path doesn’t always go as expected.

Like for Nebraska in 2011. That’s the year it was ranked No. 2 going into the NCAA Tournament, and mentally packing its bags for a trip to Honolulu in the second week after the bracket was announced. That trip never happened because Nebraska got upset by unranked Kansas State in the second round.

Or just last season. When the brackets came out, it looked like Nebraska would face a daunting challenge, having to play Minnesota on its home court in the Elite Eight. But Oregon knocked off the Gophers in the Sweet 16, and Nebraska got a much easier match in the Elite Eight on its way to the Final Four.

After the selection show Sunday evening Nebraska has a guide for what its NCAA Tournament path will look like in 2019, when it hopes to extend its program record of four straight Final Four appearances.

The path could again be quite daunting with the potential of playing Wisconsin — the only team that Nebraska couldn’t really hang with this season — on its home court in the Elite Eight. But that could only occur if both Nebraska and Wisconsin win their first three matches in the tournament.

Nebraska (25-4) will play Ball State (20-11) in the first round Friday at the Devaney Sports Center. With a win, Nebraska would play the winner of Northern Iowa-Missouri in the second round.

Nebraska earned the No. 5 overall seed for the tournament. The top four seeds are No. 1 Baylor, No. 2 Texas, No. 3 Stanford and No. 4 Wisconsin. If those teams each win two matches, they’ll also get to host their respective Sweet 16 matches.

And while it may not look ideal that Nebraska could play Wisconsin a third time this season, Nebraska coach John Cook was upbeat on Sunday.

“I’m pretty happy we got a five seed, because I really felt when you look at our nonconference schedule and the wins we had and our work in the Big Ten,” Cook said. “I was worried. I saw an RPI thing where we were ninth or 10th.”

Nebraska is one of seven Big Ten teams that made the tournament, including five that are top 16 seeds. And Cook was pleased with how the selection committee slotted Wisconsin.

“I’m really happy that Wisconsin got a seed. I was really worried that they wouldn’t get it,” Cook said.

Nebraska and ACC champion Pittsburgh (29-1) were also in consideration for the No. 4 seed.

Nebraska junior outside hitter Lexi Sun said the players are ready for another tournament to begin.

“We’re just excited for the first game this weekend and getting it started, and hopefully getting another shot at Wisconsin,” Sun said.

Nebraska lost all six sets it played against Wisconsin this season. The Badgers have been a tough matchup for the Huskers. Wisconsin is a veteran team that has great back-row players that help the Badgers’ powerful offense get rolling at full strength. And Nebraska hasn’t been a good enough serving team to stress the Badgers.

Nebraska’s two worst defensive matches of the season came against Wisconsin, with the Badgers hitting .376 and .331 against the Huskers.

But in its history Nebraska has been able to reverse the outcome when getting a rematch in the tournament.

“We got to get there, so I don’t even want to talk about it,” said Cook of Wisconsin. “In some ways it’s not good because it’s two Big Ten teams that have to play each other before the Final Four. We got to win two matches here first, so we’ll worry about that next week.”

Ticket info: Tickets are currently on sale and can be purchased at Huskers.com/tickets or by calling 800-8-BIG RED beginning at 8 a.m. Monday.

TV: To be announced.

'I get the most joy when we really shut teams down': Huskers shine on defense heading into NCAA Tournament

Nebraska sweeps Ohio State to finish the regular season with a 17-3 record in league play.

Nebraska volleyball coach John Cook often talks about the fine line between success and failure when you’re serving in a college match.

In the moments before the fifth set during the Nebraska volleyball team’s match against Minnesota last week, the TV cameras for the Big Ten Ne…

After sweep of Maryland, Huskers have one more match to make case for high NCAA Tournament seed

Lexi Sun and Jazz Sweet had 10 kills apiece to lead the sixth-ranked Nebraska volleyball team to a 25-20, 25-15, 25-18 win against Maryland on Friday at the Devaney Sports Center.

John Cook has said multiple times: it's harder to win the Big Ten than a national championship.

In a span of about 30 minutes on Friday evening the Nebraska volleyball team experienced one of the lowest moments of its season, and also one…

The Creighton volleyball team will be on the road to begin the NCAA Tournament.

'I still think we’ve got another level': Cook hoping for more from Huskers in NCAA Tournament

The Nebraska volleyball team has had an impressive season, with a 25-4 record and a second-place finish in the Big Ten.

John Cook on the radio: Huskers exceeded coaches' expectations during second half of the season

As it gears up for the NCAA Tournament, Nebraska volleyball team has exceeded what coach John Cook may have expected about 10 weeks ago.

Where to find Nebraska volleyball's NCAA Tournament run on TV

Nebraska’s matches in the NCAA volleyball tournament this weekend will be televised on NET, the Nebraska athletic department announced Wednesday.

'One of the best volleyball environments in the world': How it feels to play Nebraska in the first round

Opponents typically don't fare well in Lincoln in first-round NCAA Tournament matches. But that doesn't stop them from enjoying the trip.

'It was a lot of fun tonight': Nebraska's offense puts on a show to start NCAA Tournament

The Huskers made quick work of the Cardinals and will advance to take on Missouri on Saturday.

Nebraska’s Lauren Stivrins (second left) is surprised after being complimented during the NCAA volleyball tournament selection show at a watch party at the Devaney Sports Center on Sunday. Nebraska earned the No. 5 overall seed in the NCAA Tournament and will face Ball State at home on Friday.