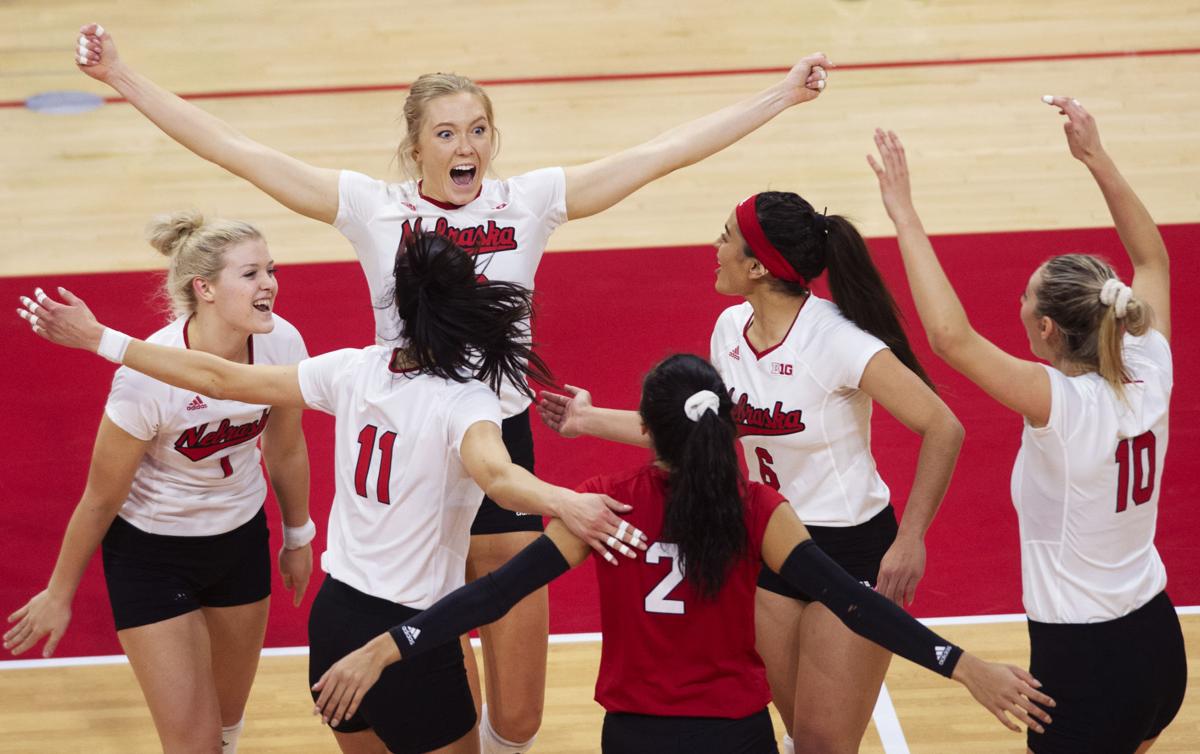 Nebraska's Lauren Stivrins (top left) celebrates with her team after a kill during a win against No. 5 Minnesota on Feb. 21. 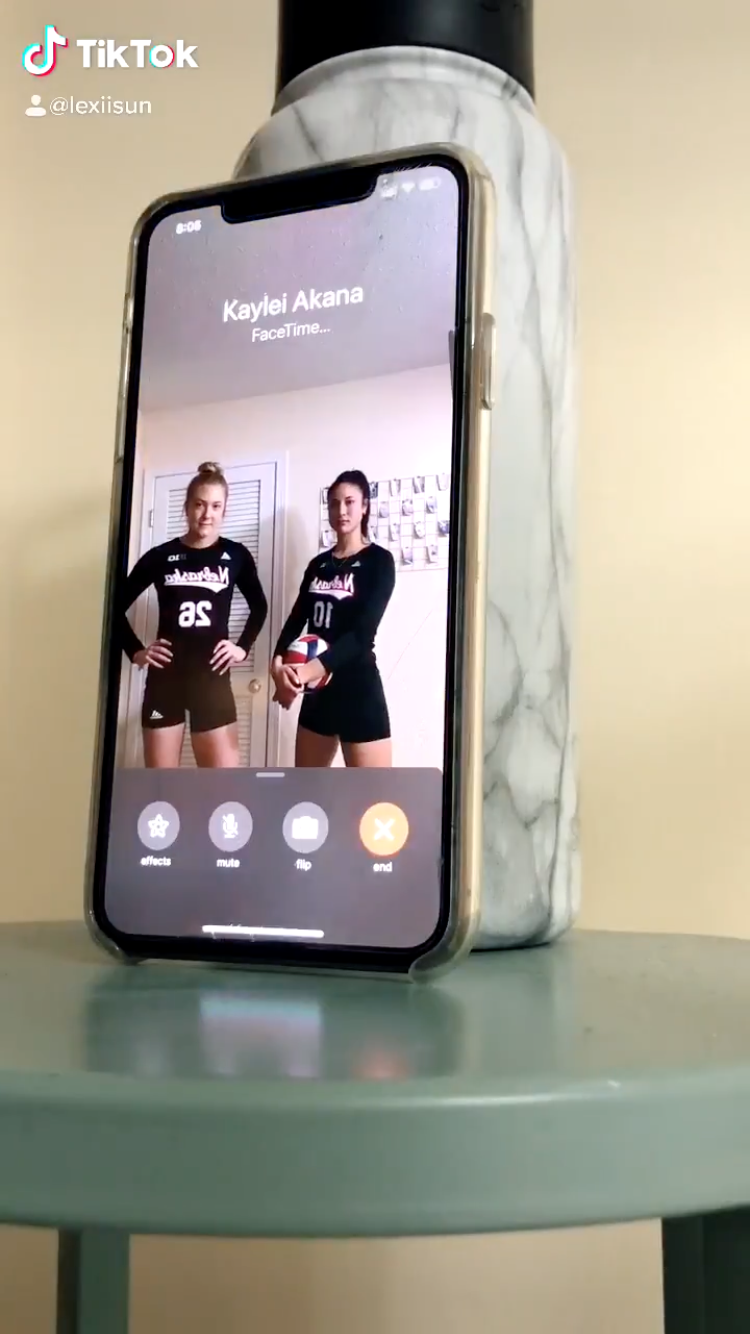 When the Nebraska volleyball season schedule was announced on Dec. 29 Lauren Stivrins and Lexi Sun put on their uniforms and called each of their teammates on FaceTime to celebrate the occasion. They made a TikTok video of the reactions and posted it on social media. 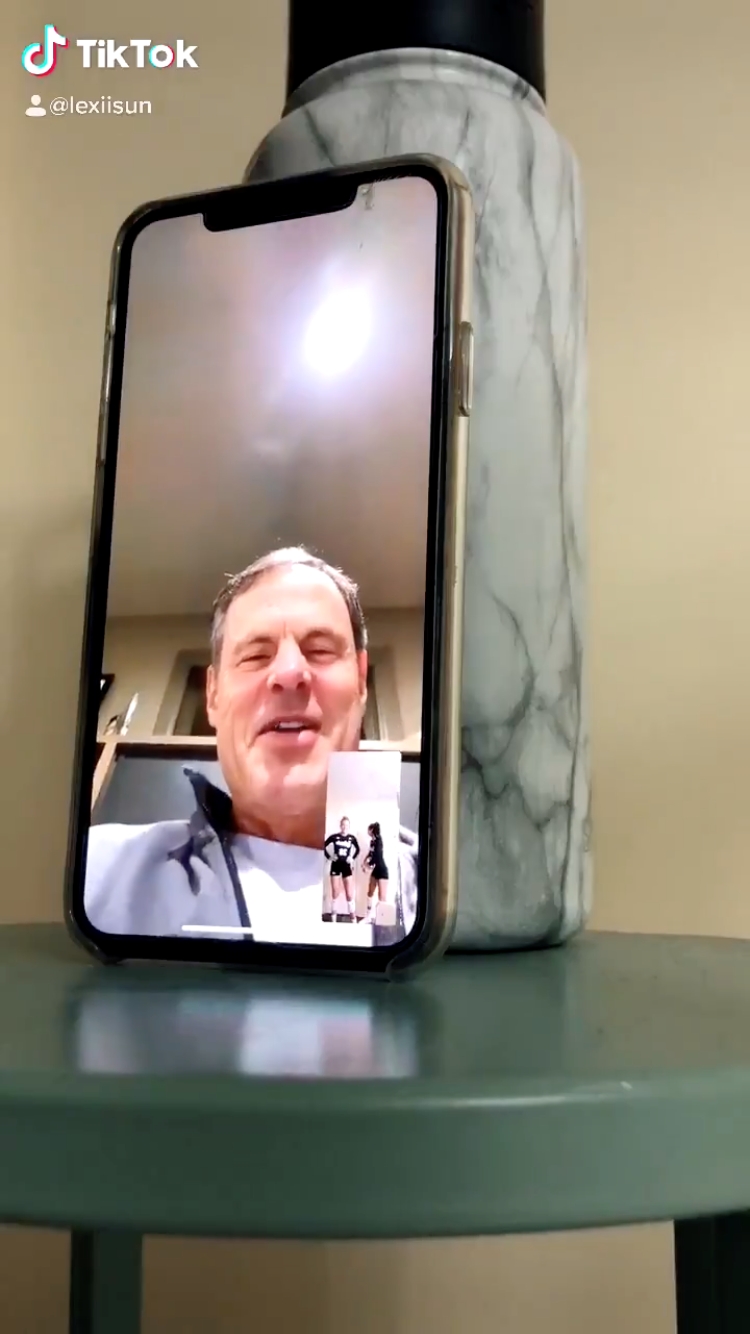 When the Nebraska volleyball season schedule was announced on Dec. 29 Lauren Stivrins and Lexi Sun put on their uniforms and called each of their teammates to celebrate the occasion. They made a TikTok video of the reactions, including of coach John Cook laughing, and posted the video on social media.

Lauren Stivrins and Lexi Sun went viral with a short TikTok video they made a few weeks before the college volleyball season began.

On the late December evening Nebraska’s season schedule was announced, and the Husker seniors knew for sure they’d have a season, Sun and Stivrins put on their volleyball uniforms and a made a FaceTime video call to each of their teammates and the coaches as a way to celebrate the occasion and get a few laughs.

For outsiders, it was a glimpse into the personality of the players, but it also points to what coach John Cook believes is a strong culture in the program right now.

And that culture could be key as Nebraska attempts to navigate a season with several hurdles while playing during a pandemic, and tries to live up to its own expectations of reaching the NCAA Final Four.

The No. 4 Huskers are off to a strong start to the season with a 7-1 record going into Friday’s match against Illinois (2-6). The 8 p.m. match will be televised on BTN.

The Big Ten volleyball schedule was announced on Dec. 29, shortly after the Huskers had returned to Lincoln to resume practice for the season.

So Stivrins and Sun came up with the idea to put on their uniforms and call their teammates. When the person on the other end answered, what they saw was Stivrins and Sun standing by a wall in their home in uniform, with Sun holding a volleyball. They didn’t say anything, and waited for the reaction to the peculiar sight.

They recorded the reactions, and then made a video and posted it on social media. On Twitter the video was viewed more than 90,000 times.

When Nicklin Hames answered the call she laughed, and said, “What the heck are you guys doing?”

When Cook answered he took a few seconds to size up the situation, and then laughed: “Are you guys serious?”

What did Stivrins learn from making the video?

“This team is funny,” she said. “Honestly Lexi and I were just sitting on the couch doing nothing at the end of the day. We had seen a few people from, I don’t know, ‘The Bachelor,’ doing a similar thing. We were like, ‘How would our team react?’ We didn’t give any of them a head’s up. We just threw on our jerseys and our full get-up and stood in front of the camera and didn’t say a word. It was so funny.”

The plan was just to share the video with the team.

“I was like, ‘No, I think it’s really funny and we should just put it out there,’” Stivrins said. “Everyone seemed to enjoy it as much as we did, so that was awesome."

“He thought it was so funny,” Stivrins said. “Even the next day he was like, ‘You guys got me so excited for the season. I can’t wait.’ He’s like, ‘Seeing you guys in jerseys again, that was so cool.’”

All but two of the players and coaches they called answered right away, Stivrins said. One called back later, but they’d already changed clothes.

“This team is so close like that,” Stivrins said. “We can call anyone at any time and they’re going to pick up.”

A sign of the team’s strong culture was when Nebraska beat No. 5 Minnesota two weeks ago, just two days after getting beat pretty badly by the same team.

And Cook says the team loves to train.

“I never think that they don’t want to be there,” Cook said. “I can give you years and dates that are imprinted in my brain of days and times when (past Nebraska teams) didn’t want to be there. But this group seems to really, really enjoy it. And I think it’s how we run our practices and how we structure it. They’re learning and getting better and having fun and getting challenged.”

Most of what Cook has seen tells him the program’s culture is strong.

“They seem like they like each other,” Cook said. “The only thing that’s a damper is getting matches (postponed) because I think they really want to play. They were asking me, ‘Hey, can we go play somebody else?’ I said, ‘Well, we’re looking at it.’ I just think they want to play and compete. I think the culture of our program is awesome.”

No. 4 Nebraska at Illinois

“We were able to play some really good volleyball from 19 points on,” John Cook said.

Classic comeback: No. 4 Husker volleyball team roars back from 2-0 deficit to defeat No. 11 Ohio State

Middle blocker Lauren Stivrins had 18 kills, six blocks and smashed the kill on match point. Lexi Sun had 17 kills, including three big ones in the fifth set, and two blocks.

Sun and Stivrins have said in previous interviews that they haven’t made a final decision about next season.

Nebraska's Lauren Stivrins (top left) celebrates with her team after a kill during a win against No. 5 Minnesota on Feb. 21.

When the Nebraska volleyball season schedule was announced on Dec. 29 Lauren Stivrins and Lexi Sun put on their uniforms and called each of their teammates on FaceTime to celebrate the occasion. They made a TikTok video of the reactions and posted it on social media.

When the Nebraska volleyball season schedule was announced on Dec. 29 Lauren Stivrins and Lexi Sun put on their uniforms and called each of their teammates to celebrate the occasion. They made a TikTok video of the reactions, including of coach John Cook laughing, and posted the video on social media.