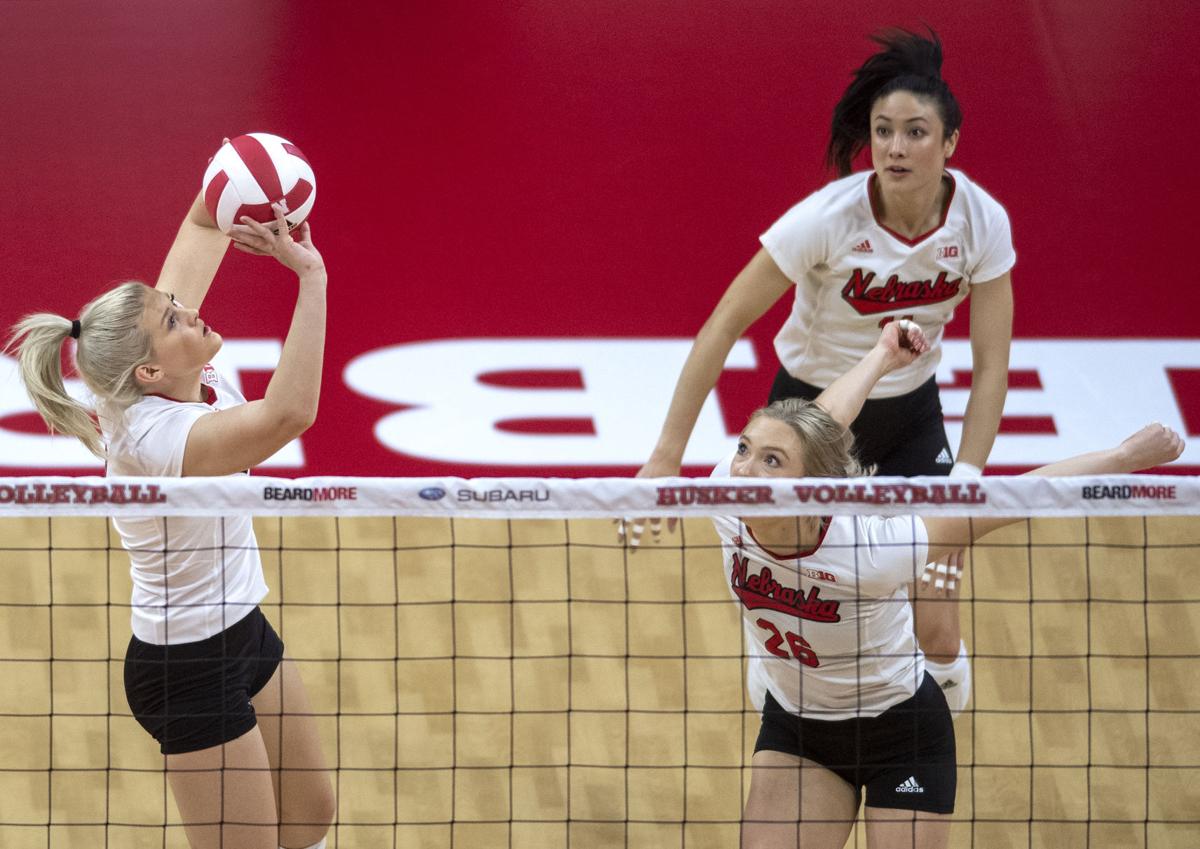 In the fine-tuned offense for the Nebraska volleyball team this season, hitters such as Lauren Stivrins (26) and Lexi Sun (11) always need to be ready for a quick set from Nicklin Hames (left). 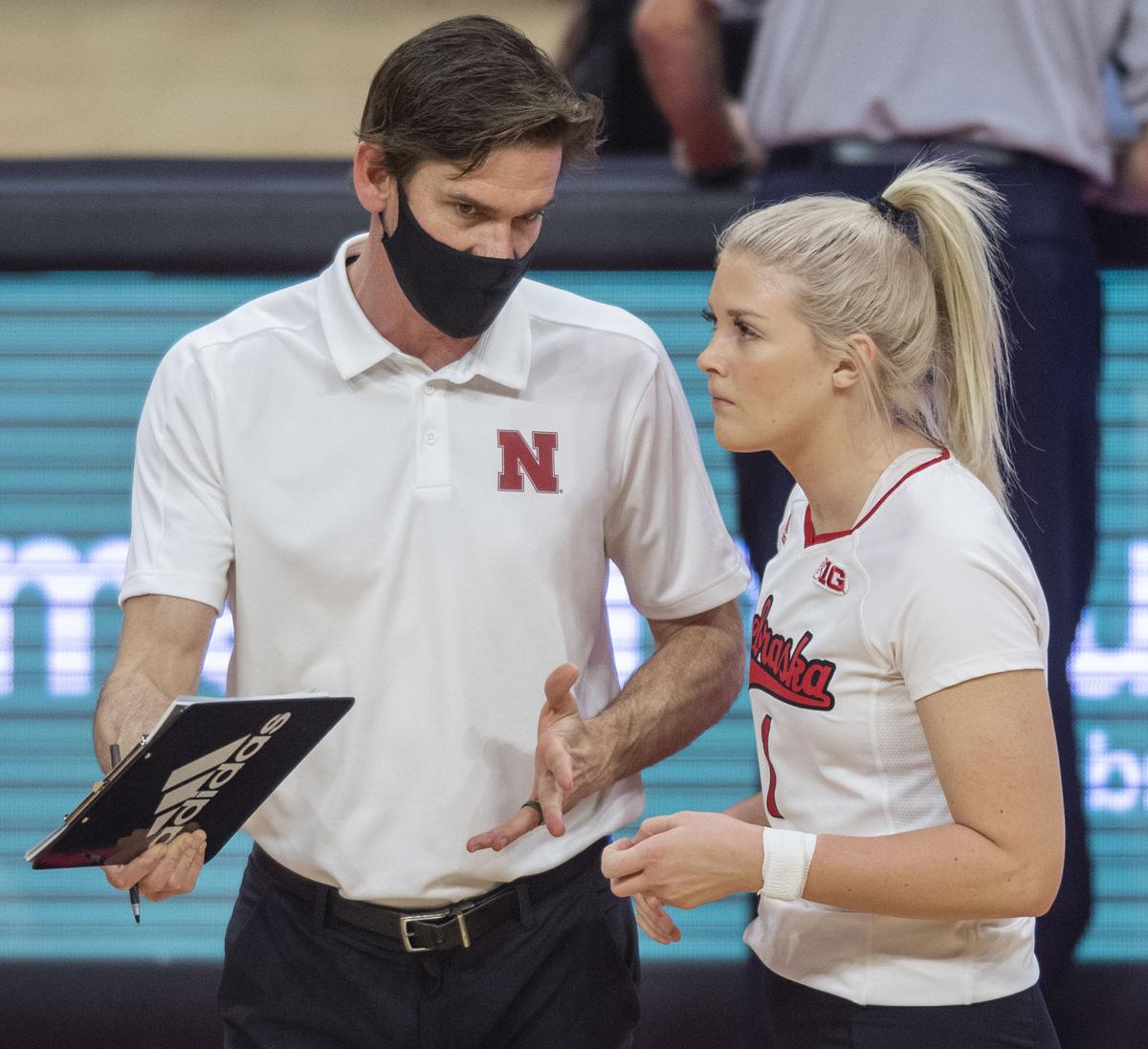 Nebraska associate coach Tyler Hildebrand (left) talks with Husker setter Nicklin Hames during a timeout against Maryland earlier this month at the Devaney Sports Center. Hildebrand and head coach John Cook have retooled some of what Hames does as a setter to make her sets more deceptive and creative.

Nebraska had one of the better offenses in college volleyball last season.

The Huskers ranked second in the Big Ten in hitting percentage (.284) and third in kills per set (14.22). Lexi Sun and Lauren Stivrins flourished enough in the system to earn All-American honors.

Ultimately, the Huskers came up short on a pair of goals: winning the Big Ten title and reaching the NCAA Final Four. The Huskers finished 28-5 and had their season end in the Elite Eight with a third loss against Wisconsin.

During a long offseason — a result of the season being postponed five months due to COVID-19 — the Huskers went to work and made some changes trying to ramp up their offensive attack in hopes it will help NU reach its goal of appearing in another Omaha Final Four later this spring.

The foundation of the program under coach John Cook is still the same — serving, blocking and defense. The Huskers are just hoping to add a little more creativity and power to their attack.

Nebraska didn’t make major changes, such as switching to a two-setter offense. Cook uses the analogy of fine tuning a race car.

“I would say they’re enhancements,” Cook said. “Just trying to do what we do better.”

Many of the changes are in the hands of junior setter Nicklin Hames, such as getting Nebraska to play quicker and make a few more high-risk, high-reward plays, such as setting the middle blockers in different ways.

“We’re trying to play a little faster, we’re trying to be more athletic and play with a little more speed,” Cook said. “Those are the main things to look for.”

Nebraska has a key Big Ten series this weekend when the No. 4 Huskers play No. 5 Minnesota twice. The first match of the series is at 8 p.m. Friday and will be televised on BTN.

This will be the first big test of the season for Nebraska, as its first three opponents have a combined record of just 3-21.

For Nebraska’s offensive changes to be most effective, the Huskers’ serve-receive needs to improve, so that Hames can get in a better rhythm setting instead of needing to scramble and use a bump set.

Cook and associate head coach Tyler Hildebrand have retooled some of what Hames does as setter, with the goal of making her sets more deceptive and creative. The result so far has been more sets for middle blockers Kayla Caffey and Stivrins, and they’ve turned them into kills.

In a win against Maryland, Stivrins had one of the best hitting matches in program history with 18 kills on 20 attempts. And in her last four matches, Stivrins is averaging 3.71 kills per set with a .549 hitting percentage

“Nicklin has just completely changed her game, and she is chucking in balls from wherever to whoever,” Stivrins said. “It started off slow and a little bit rough, but to see her get more comfortable doing that, and for us to have that confidence and bond to be able to do that in games is something that’s so special. … I think she’s going to be an amazing setter this year. She already is, but she’s taken it to a whole ’nother level.”

Hildebrand, who is in his second stint coaching at Nebraska, played setter in college at Long Beach State.

The initial plan for this season was that Hildebrand would coach defense during the matches, but after the first weekend the coaches changed roles so Hildebrand could focus on offense and consult with Hames during timeouts. Assistant coach Jaylen Reyes now calls the defense.

A few changes to the offense have been refreshing for Stivrins, who is in her fifth year in the program after redshirting during her first season. She’s played in 111 matches as a Husker.

“(Hildebrand is) about creativity and trying new things,” Stivrins said. “We’ve run the same offense pretty much since I’ve been here, but Tyler has brought a whole new level of offense to this team and it’s completely changed the way that we play volleyball in every way. Recently Tyler has been our offensive guru. He’s Nicklin’s coach in games and he helps us run offenses that are unique to us. We all have different plays now for different people, and different sets, and it’s really cool to see.”

In the fine-tuned offense for the Nebraska volleyball team this season, hitters such as Lauren Stivrins (26) and Lexi Sun (11) always need to be ready for a quick set from Nicklin Hames (left).

Nebraska associate coach Tyler Hildebrand (left) talks with Husker setter Nicklin Hames during a timeout against Maryland earlier this month at the Devaney Sports Center. Hildebrand and head coach John Cook have retooled some of what Hames does as a setter to make her sets more deceptive and creative.