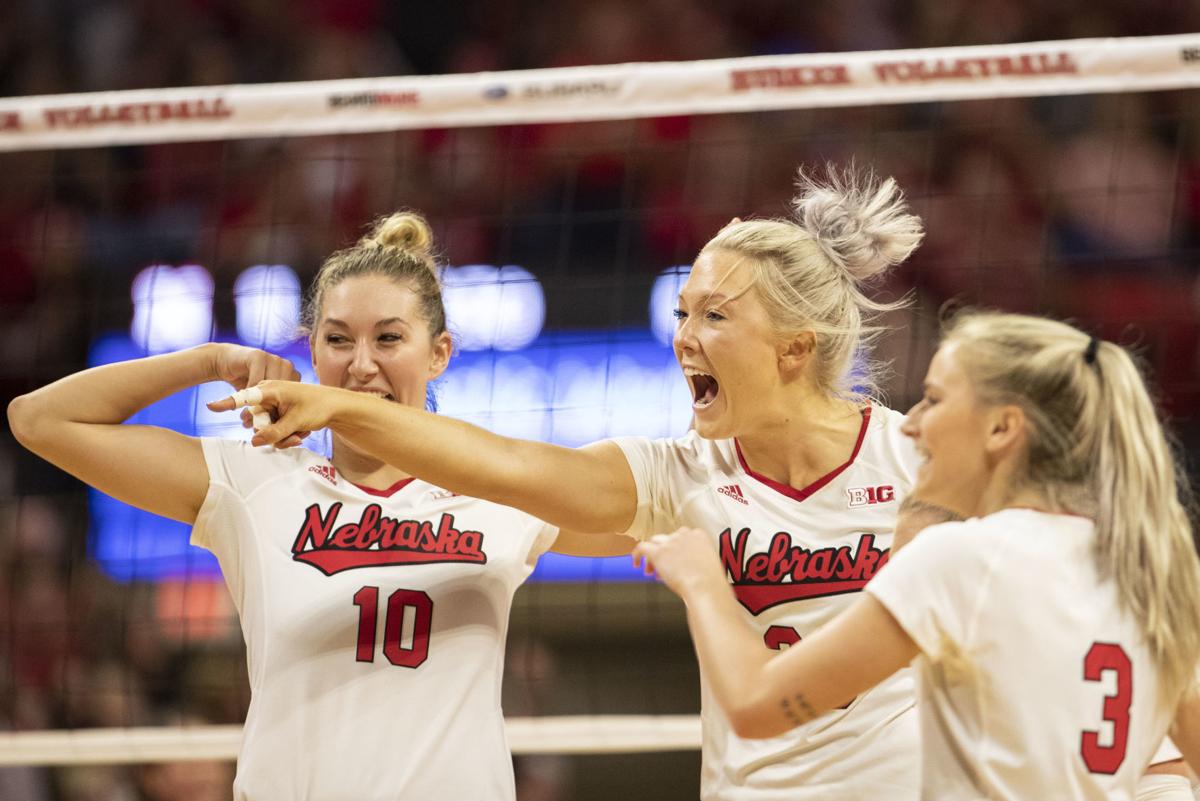 Nebraska’s Lauren Stivrins (center) celebrates a point during the team's season-opening match against Creighton at the Devaney Sports Center on Friday. 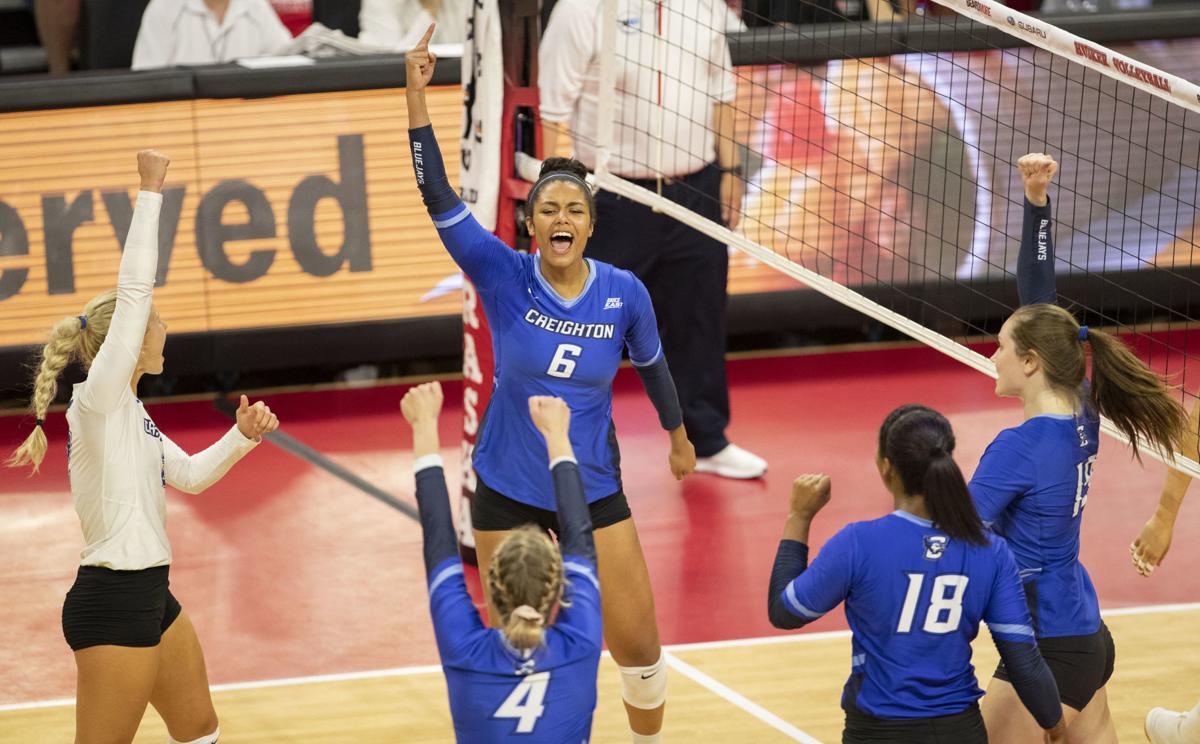 Creighton’s Keeley Davis celebrates with her teammates after scoring a kill during the Bluejays' match against Nebraska at the Devaney Sports Center on Friday.

The Nebraska volleyball team always wants to be really good on defense — you have more control over your success on defense than offense, Husker coach John Cook says — and that defense helped the Huskers to a four-set win against Creighton on Friday.

Nebraska’s hitting was up-and-down — a great kill was sometimes followed by a shot wide or into the net — but the Huskers held Creighton to a .067 hitting percentage. Nebraska hit .176.

Freshman libero Kenzie Knuckles led Nebraska with 22 digs. Nicklin Hames added 15 and Megan Miller had 14. Callie Schwarzenbach had five blocks and Jazz Sweet had three. Capri Davis had a solo block, which got Hames so excited she pushed Davis in celebration.

It was that defense that had junior middle blocker Lauren Stivrins excited.

“I think this team is relentless on defense and I think we proved that,” Stivrins said. “It’s not going to be easy to play us, and we’re going to give it all we have. There were so many long rallies and I think for the most part we were winning them.

“This team is really young, but they didn’t act it today. I think we could have come out and played nervous or scared but we came out really strong in that first set and I thought Kenzie balled out today. She was a stud.”

It came in front of another sellout crowd of 8,450, including about 250 people in the standing-room-only area at the top of the arena.

Lexi Sun led Nebraska with 13 kills. Davis added 10, and Stivrins had nine kills, with a .500 hitting percentage. Sweet added seven kills, but none of the Huskers’ primary outside hitters hit better than .200. Hames had four ace serves.

The deciding fourth set was tied at 21 before Nebraska won the final four points.

Creighton coach Kirsten Bernthal Booth felt that the Bluejays played better than some of the stats would indicate.

“I was really impressed with Nebraska defensively,” she said. “I thought they made some special plays out there.”

One of the Huskers' improvements in the final two sets was setting Stivrins.

In the third set, she got going on the slide play, smashing kills on that play on three of four rallies to give Nebraska a 12-5 lead. The Huskers stayed in control the rest of the set to reclaim a 2-1 set lead.

When the Huskers were passing well enough to get the ball to Stivrins, it made them tough to stop.

“She’s arguably the best middle in the country I think right now, especially behind (the setter),” Bernthal Booth said. “We were committing everything to try and slow her down, and unfortunately we couldn’t do it.”

Freshman Madi Kubik started at outside hitter, but near the end of the first set, Davis came in, and played partly in the front row, with Kubik in the back row. Davis had also impressed during the team scrimmage last week.

“I just felt Madi was just really tentative tonight,” Cook said. “And Capri, as you can see,  she does some nice things. I wanted an opportunity to get Capri in tonight, and that was it.”

Late in the third set, NU freshman backup setter Nicole Drewnick played as a serving sub, quickly ending any thought of a redshirt. She graduated from an online high school one year early and won’t turn 18 until next week.

Nebraska improved to 19-0 all-time against Creighton.

NU will play UCLA on Saturday at 7 p.m. Cook hopes Nebraska can reduce the many serving and hitting errors it made Friday.

We won’t know exactly how good the Nebraska volleyball team is until December, and it will be really difficult to be better than last year, wh…

There may not be many major surprises for the Nebraska volleyball this season, with a group that returned five starters from a national runner…

Nebraska’s Lauren Stivrins (center) celebrates a point during the team's season-opening match against Creighton at the Devaney Sports Center on Friday.

Creighton’s Keeley Davis celebrates with her teammates after scoring a kill during the Bluejays' match against Nebraska at the Devaney Sports Center on Friday.