The Scene: Stay in Omaha well worth it for Kentucky, which delivers national title to Cook coaching tree
0 comments
Share this
{{featured_button_text}}
1 of 2 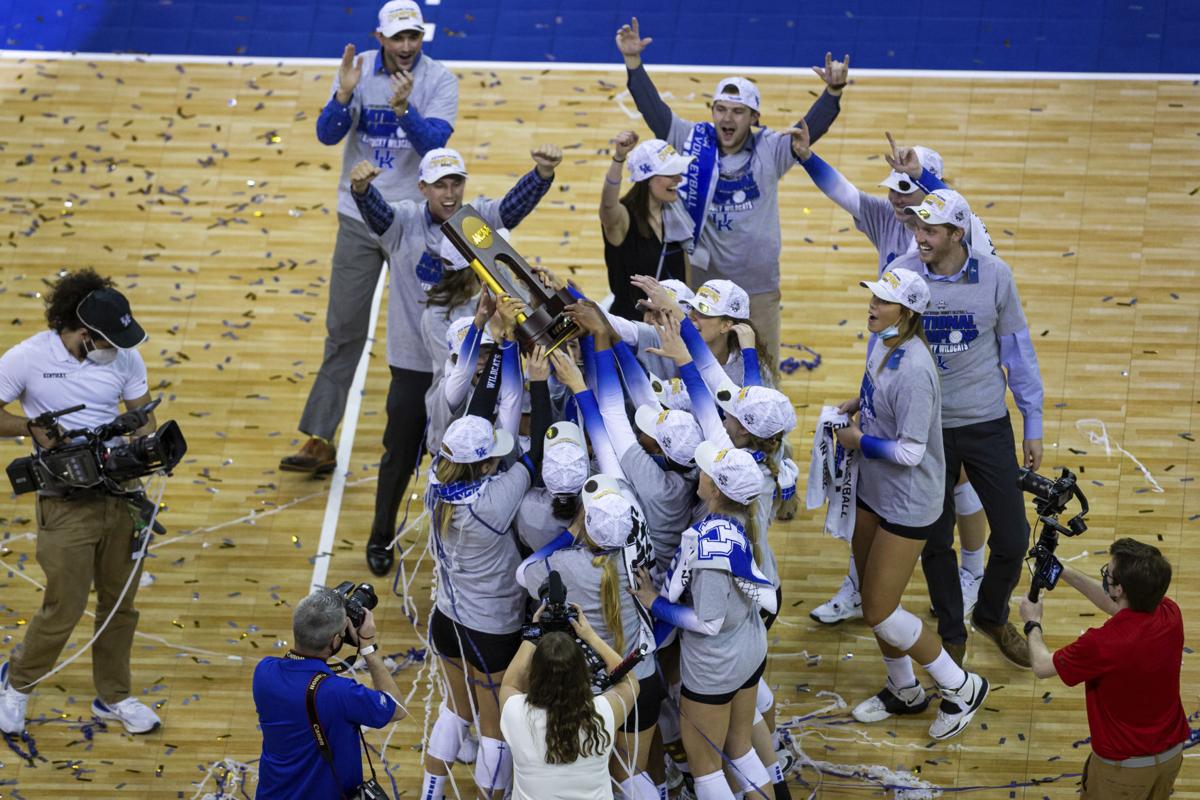 Kentucky players hold the trophy after beating Texas in the NCAA volleyball championship in four sets Saturday in Omaha. 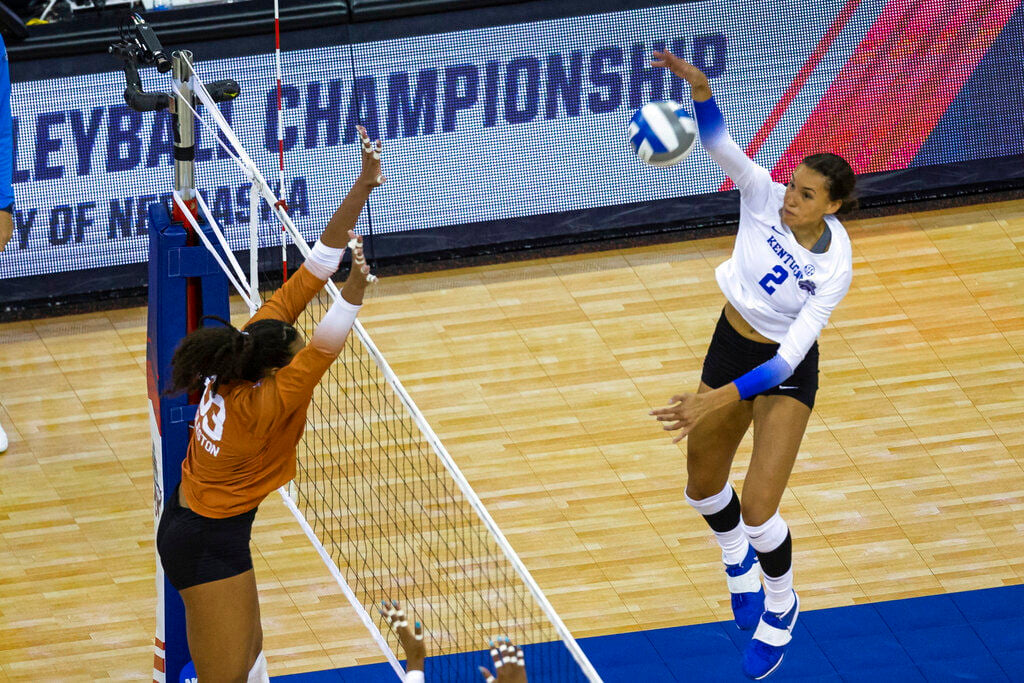 OMAHA — For Madison Lilley and the Kentucky volleyball team, their stay in the Omaha bubble for the NCAA Tournament started to feel like Groundhog Day.

The team’s two-week stay here got a little monotonous, the Wildcats superstar setter said. There was always COVID-19 testing, and usually one or two practices each day.

But there wasn't anything ordinary about the team’s last full day in Omaha. Instead, the Wildcats did something that’s never happened before at UK, with the Wildcats winning the national championship in volleyball.

Kentucky, one season after losing in the NCAA Sweet 16, is the champion of the COVID-19 season. That makes the Wildcats just the 11th program to win an NCAA title in the sport.

The Wildcats won five matches over 10 days in Omaha for the championship, and lost just two sets.

Outside hitter Ali Stumler led the Wildcats with 26 kills, and was a big part of the Wildcats’ turnaround after losing the first set. She finished with a remarkable .471 hitting percentage. Texas dominated the first set, hitting .455 in the set and blocking the Wildcats three times.

Stumler was the No. 38 national recruit out of high school, but the 6-foot-1 outside hitter from Floyds Knobs, Indiana, is now a first-team All-American and national champion.

Stumler had the kill on national championship point on another out-of-system attack from libero Gabby Curry, ending the everybody-on-their-feet finish to the match after the fourth set was tied at 21.

The championship is also the first for Kentucky’s Craig Skinner as a head coach.

Moments after the match ended, Skinner busted through a gate, and those COVID-19 protocols, and went into the first rows of the crowd to hug his family.

Skinner, who was an assistant coach at Nebraska from 2000-04, is the first coach from the John Cook coaching tree to win a national title.

In the five years before Skinner arrived, Kentucky never had a winning record, but he has never had a losing record there, and this season the Wildcats were the best of the 312 programs that played.

About 40 minutes after the match ended, Skinner said he still felt numb.

Skinner was thinking about all of the players and coaches who helped the Wildcats reach each of the levels you must with a program before you get in a position where you can win a national championship. Those former players include two from Nebraska  — Ann Armes from Grand Island and Brooke Bartek from Lincoln.

“I hope they feel a part of this, because it’s special,” Skinner said.

Lilley played a big part in the Wildcats winning the title. She’s extremely fast and skilled as a setter and does a great job of using the team’s strengths to her advantage. UK had a .349 hitting percentage on Saturday, an impressive number for a title match.

Texas coach Jerritt Elliott said Lilley did a great job of always getting the Wildcats hittable balls. He said she may be the best college setter he’s seen in his 25 years in the sport.

Lilley, from Overland Park, Kansas, was the No. 4 recruit in the nation and could have gone to programs with more success than Kentucky. But she saw Skinner’s vision for the program and took the Wildcats to new heights.

“We’re a completely different place than when she arrived,” Skinner said.

Kentucky persevered, mentally and physically, to win the longest season ever. Kentucky played its first match on Oct. 16. The Wildcats went 8-0 in the fall, and then picked things back up in the spring. Skinner was blown away by how well the team played in its first matches back in late January and February, and the squad just kept going and improving. The Wildcats went 15-1 in the spring to finish 24-1 overall.

Texas was in the championship match for the third time times in six years, but has lost each.

Watch party: Back in Lexington, Kentucky, hundreds of fans gathered at Memorial Coliseum where the volleyball team plays its home matches on Saturday for a watch party, which was another sign of the growth in the program in Skinner’s 16 seasons as coach.

“I will never forget walking into my first match in 2005 as the head coach of Kentucky,” Skinner said. “It was against (Eastern Illinois), and I think we might have won in four (sets), but there was about 67 people in the stands.

“Boy, dreams start somewhere, and it was my hope and dreams that my daughters could be in the stands when thousands of people were watching. Obviously we’re in a different time with the pandemic, but to know that there is a watch party at Memorial is pretty damn cool.”

In 2019, Kentucky ranked 17th nationally in attendance, averaging 2,170 per match. That ranked second in the SEC, behind Florida.

Omaha champions: This is the fourth time the volleyball Final Four has been in Omaha. The teams to win national championships here are Nebraska (2006 and ’15), Penn State (2008) and Kentucky.

And even without the Huskers playing on Saturday, the announced attendance for the championship match was 5,116, raising the tournament total to 24,242, despite many COVID-19 crowd restrictions.

Up next: The Final Four goes to Columbus, Ohio, for the fall 2021 season, with the championship match less than eight months away.

And then Omaha gets a mulligan for this season by getting to host again in 2022, when full crowds and the coaches’ convention that is normally part of Final Four week should return.

Coming back: The college volleyball offseason will have more news than usual, as seniors will have to decide whether they’ll return for an extra season because of the NCAA eligibility waiver for this season.

Only one no-contest: Of the 47 scheduled matches in the tournament only one was a no contest. A first-round match between Rice and North Carolina A&T was canceled due to COVID issues for Rice.

Final Four not all the same: College volleyball is largely dominated by the same teams, but a little less so this season at the Final Four with none of the big three — Stanford (nine titles), Penn State (seven) or Nebraska (five) here, and now a first-time champion with Kentucky.

And this season’s championship matchup was the first since 1995 (Nebraska vs. Texas) that didn’t include a team from either the Big Ten or Pac-12.

Recruiting ranking look back: The PrepVolleyball.com recruit rankings for the 2017 recruiting class did a good job of gauging the potential of the players. Looking back, eight of the top-10 recruits earned All-America honors this season, including Nebraska’s Sun; Texas middle blocker Brionne Butler (No. 2 recruit, first-team All-American); Lilley (No. 4 recruit) and Stephanie Samedy (No. 5 recruit, Big Ten player of the year).

Photos: A look inside CHI Health Center Omaha, the site of the NCAA volleyball tournament

It's hard telling what Nebraska's roster will look like next season after this oddest of volleyball seasons, which ended for the Huskers in the Elite Eight.

Kentucky players hold the trophy after beating Texas in the NCAA volleyball championship in four sets Saturday in Omaha.