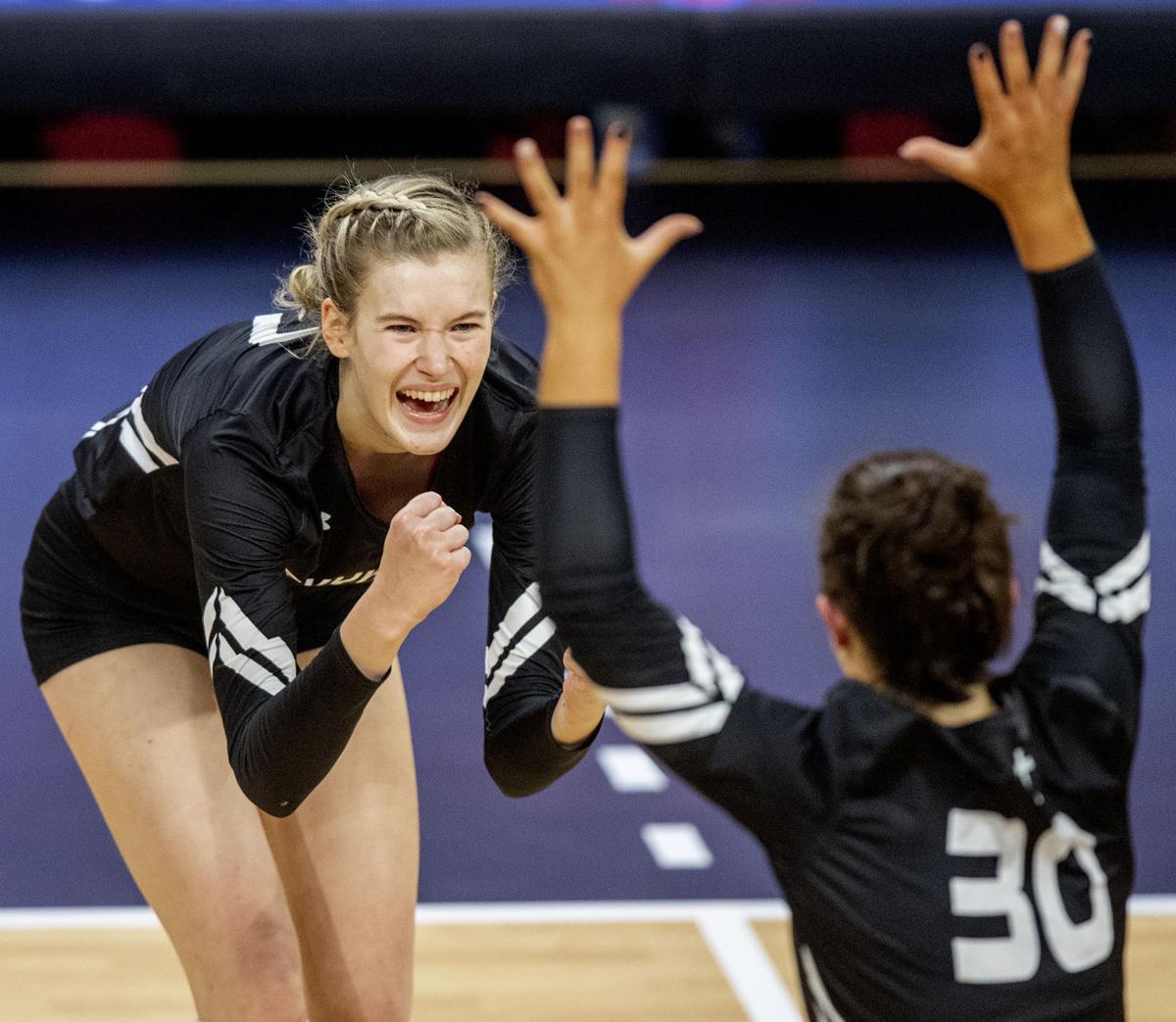 Omaha Skutt's Lindsay Krause (left) celebrates a kill with teammate Allison Gray in the third set against Omaha Duchesne in the 2019 Class B state championship match at the Devaney Sports Center. Krause is the No. 2-ranked player in the nation in the 2021 recruiting class. 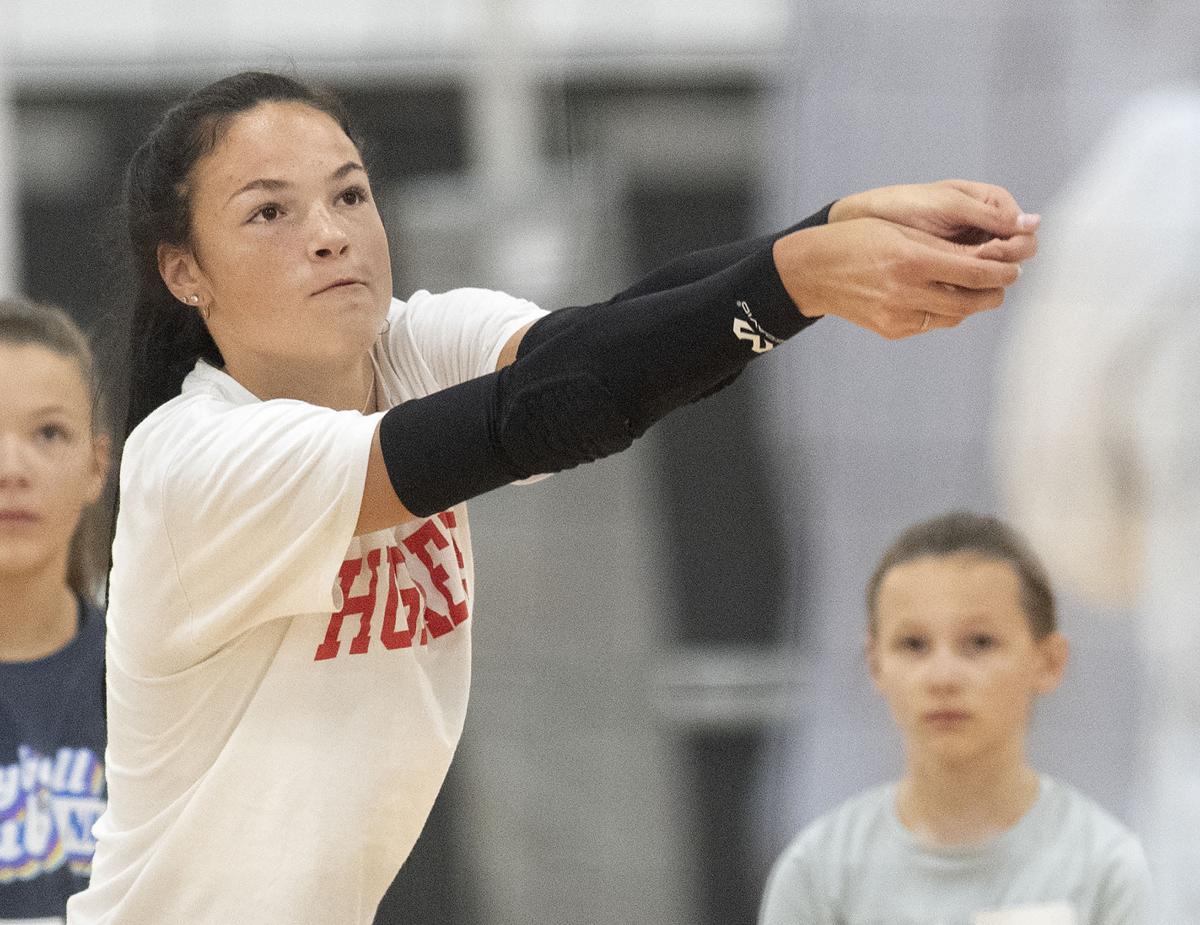 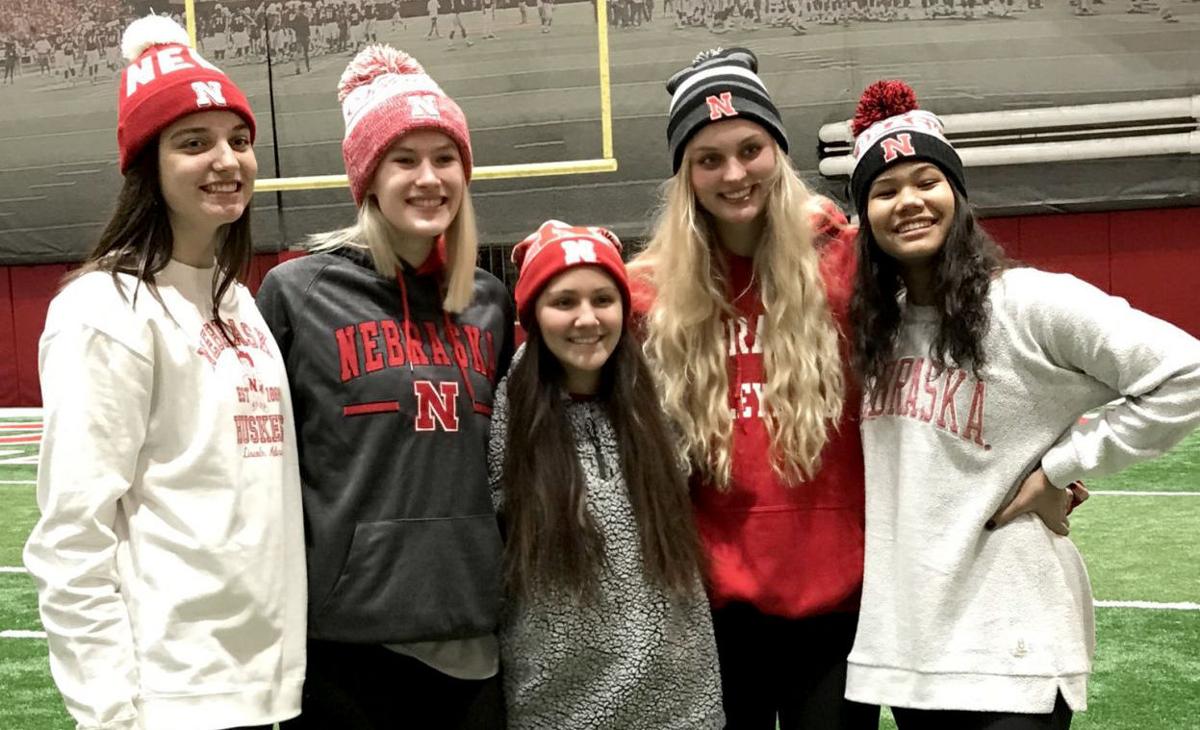 The Nebraska volleyball 2021 recruiting class — which includes Rylee Gray (from left), Lindsay Krause, Lexi Rodriguez, Ally Batenhorst and Kennedi Orr — is the No. 1-ranked recruiting classes in the country. This photo was taken during an unofficial visit to the Husker program in November 2019.

The Nebraska volleyball program has signed a recruiting class of six players that is ranked as the No. 1 class in the nation.

And with the No. 1, No. 2 and No. 3 recruits in the PrepVolleyball.com national rankings, the class is considered one of the best recruiting classes regardless of sport. Nebraska landed the No. 1 player in the class at outside hitter, setter and libero.

The players each signed her national letter of intent on Wednesday.

Kennedi Orr, a setter from Eagan, Minnesota, is ranked No. 1; Omaha Skutt outside hitter Lindsay Krause is No. 2; outside hitter Ally Batenhorst from Houston is No. 3.

But the top-100 recruits in the class don’t stop there; Nebraska had five of the top-20 recruits overall. Lexi Rodriguez, a libero from Sterling, Illinois, is No. 10; outside hitter Whitney Lauenstein from Waverly is No. 16; and Rylee Gray from Elkhorn South is No. 70.

“Because of their accomplishments on the national and world stage, the expectations will be very high, but that is why you go to Nebraska,” said coach John Cook in a news release.

Krause and Gray each helped her team win a state championship last week. And Lauenstein had 22 kills and 22 digs during a state tournament match.

“The state of Nebraska produces some of the best volleyball talent in the country,” Cook said. “We are committed to keeping the top kids here to play at home.”

Most of the group has known each other for several years from playing on the United States youth national team together, attending Nebraska volleyball camps and their official recruiting trip to Lincoln last fall.

Three of the commitments came within two months of attending Nebraska’s Dream Team Camp in 2017.

“The three days of camp were awesome,” Cook said. “Bonds were formed, and intensity was high. We had a blast coaching the kids at the camp. We have enjoyed watching their development over the last three years.”

Orr, Batenhorst and Rodriguez are each expected to graduate from high school early and join the team in January. They’ll be able to practice with the Huskers but can’t play in matches during the season, which was postponed until January due to the pandemic.

Nebraska fans will enjoy following the journey of one Nebraska’s largest ever recruiting classes, Cook said.

“They are talented, passionate and driven to excel on and off the court,” he said.

Here is a closer look at the new Huskers:

Of note: From a young age, Orr’s setting quickly gained the attention of club and college coaches from across the country. In Minnesota, students can play high school sports beginning in the seventh grade. Orr has been a starting setter at Eagan since the seventh grade and has helped the team win four state championships. Playing for the youth national teams, she’s earned the best setter award at several tournaments.

Cook says: “Kennedi comes in as the best leader/setter in the country as well as the No. 1 overall recruit in the country according to PrepVolleyball.com. … Kennedi will have an impact on this program as a leader from day one both on and off the court.”

Congratulations to Lindsay Krause of @SkuttCatholicVB! She has signed to play volleyball at the University of Nebraska Lincoln. We cannot wait to see you soar with @Huskervball! pic.twitter.com/jzkMsfTkBi

Of note: She had a .475 hitting percentage this season and won her fourth state championship. Krause was a member of the United States youth national team that won a world championship in 2019.

Cook says: “She also brings in some international experience as she was a part of the USA youth national team in 2018 and 2019. We expect Lindsay to come in and compete for playing time at outside hitter from day one.”

Of note: She earned first-team high school All-American honors this season. As a senior she’s hitting .366 and averaging 6.5 kills per set, which are both on pace for career-best totals.  Her dad, Kurt, is from Wisner; her mom, Susan, is from Omaha.

Cook says: “Nebraska-born, Texas-built Ally Batenhorst is another huge part of this recruiting class. Having the ability to play all across the front and back row makes her very multidimensional. We expect Ally to come in and compete for playing time at outside hitter from day one.”

Of note: She was the Illinois Gatorade player of the year in 2019 and won two state championships.

Congratulations to Whitney Lauenstein as she signed today to play volleyball at the University of Nebraska!! The hard work over the years has paid off and you are still chasing your dreams. Can’t wait to see you in a Husker uniform!! @Huskervball @145activities @WhitLauenstein pic.twitter.com/Uw2HnrazRj

Cook says: “Whitney has been a fast riser in the recruiting rankings in the past year and a half. Three years ago, she came to Husker Camp and she was a middle blocker. After that camp, she switched positions and her stock has skyrocketed. A long, physical outside hitter with a live arm, Whitney became one of the most intensely recruited players in the class of 2021 following her sophomore year.”

Congrats to @Brilee_Wieseler and @ryleegray_ on signing day! We are so proud of you!! pic.twitter.com/Vm80JW35Xp

Of note: She helped Elkhorn South win its first state championship in volleyball last week, and led Class A in hitting percentage (.442). She finished her career with 476 blocks.

Cook says: “Rylee Gray comes in as one of the best middle blockers in the country. She has the innate ability to be a shutdown blocker. Rylee is another in a long line of Husker recruits who were multi-sport athletes in high school, as she is a star on the Elkhorn South basketball team. She plays with an endless motor and has been getting better each year.”

Photos: The best images from the state volleyball tournament

Defense too slow for Lindsay Krause

Class B state volleyball: 'She takes it to a whole new level': Husker recruit dominates, will play for 4th state title

The Omaha Skutt senior helped make sure she’d get one more high school match with a 19-kill performance in the SkyHawks’ dominating semifinal win.

Waverly junior Whitney Lauenstein recently committed to the Huskers, and the 6-foot-1 outside hitter will join the team as a scholarship player for the 2021 season.

The Nebraska volleyball program put a bigger emphasis on its most important summer camp for middle school and high school players this year.

Many of the state's top athletes put pen to paper Wednesday, sealing their college plans.

'This is a special day': Eight Papillion-La Vista softball players sign on for their next dance

"It's kind of crazy to see all my fellow seniors sign," said Mia Jarecki, a three-time first-team Super-State infielder. "You could tell we wanted it, and we worked so hard for it."

The Nebraska wrestling team inked a pair of Pennsylvania standouts in Jagger Condomitti (Northampton) and Lenny Pinto (Stroudsburg) on Wednesday.

'I absolutely loved it:' A visit to Montana State's campus seals commitment for Wahoo's Larson

Over the last four seasons, Wahoo has made itself a dynasty in Class C-1. Now one of the program's leaders has a home for her college career.

Saunders, in her 10th season at the helm, guided Skutt to a sixth straight Class B state championship and a 35-1 record.

Super-State volleyball: Krause's analytical approach to volleyball puts the Omaha Skutt standout in a class of her own

Lindsay Krause admits she's a "horrible perfectionist; "I don’t accept failure a lot." She also has an All-American frame and a "coach's brain."

An argument could be made that the match will feature the best collection of talent in recent memory.

Omaha Skutt's Lindsay Krause (left) celebrates a kill with teammate Allison Gray in the third set against Omaha Duchesne in the 2019 Class B state championship match at the Devaney Sports Center. Krause is the No. 2-ranked player in the nation in the 2021 recruiting class.

The Nebraska volleyball 2021 recruiting class — which includes Rylee Gray (from left), Lindsay Krause, Lexi Rodriguez, Ally Batenhorst and Kennedi Orr — is the No. 1-ranked recruiting classes in the country. This photo was taken during an unofficial visit to the Husker program in November 2019.