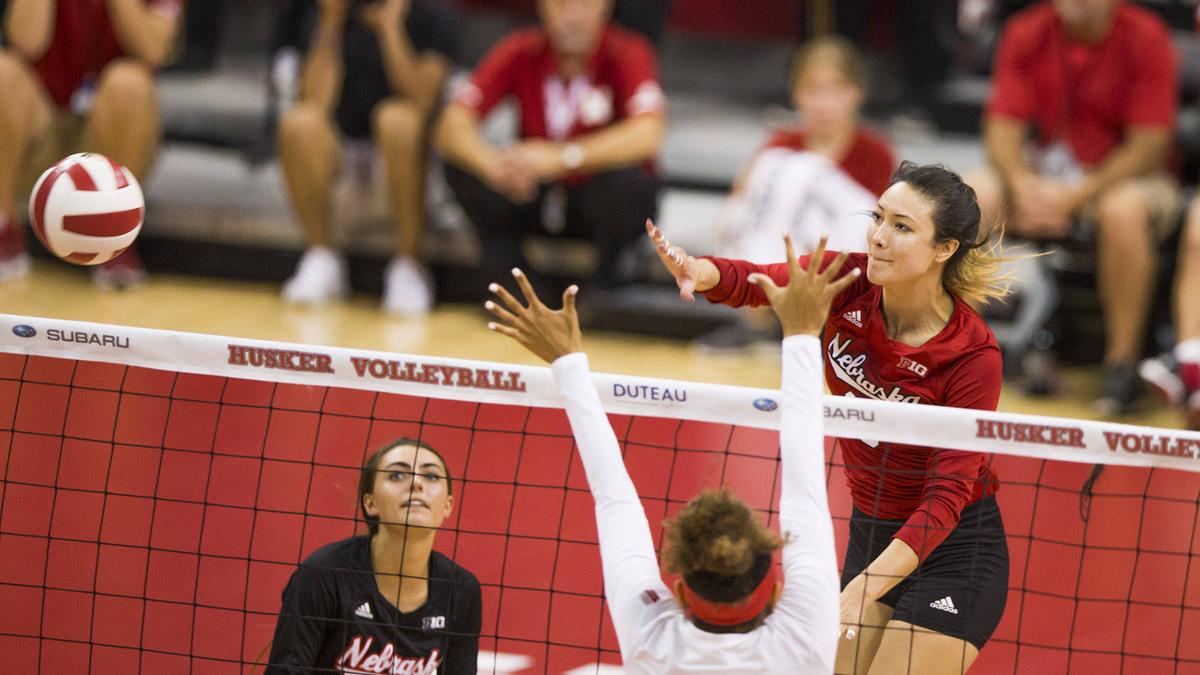 Outside hitter Lexi Sun played her first match for Nebraska on Sept. 14 during the Huskers’ four-set win against New Mexico at the Devaney Sports Center. 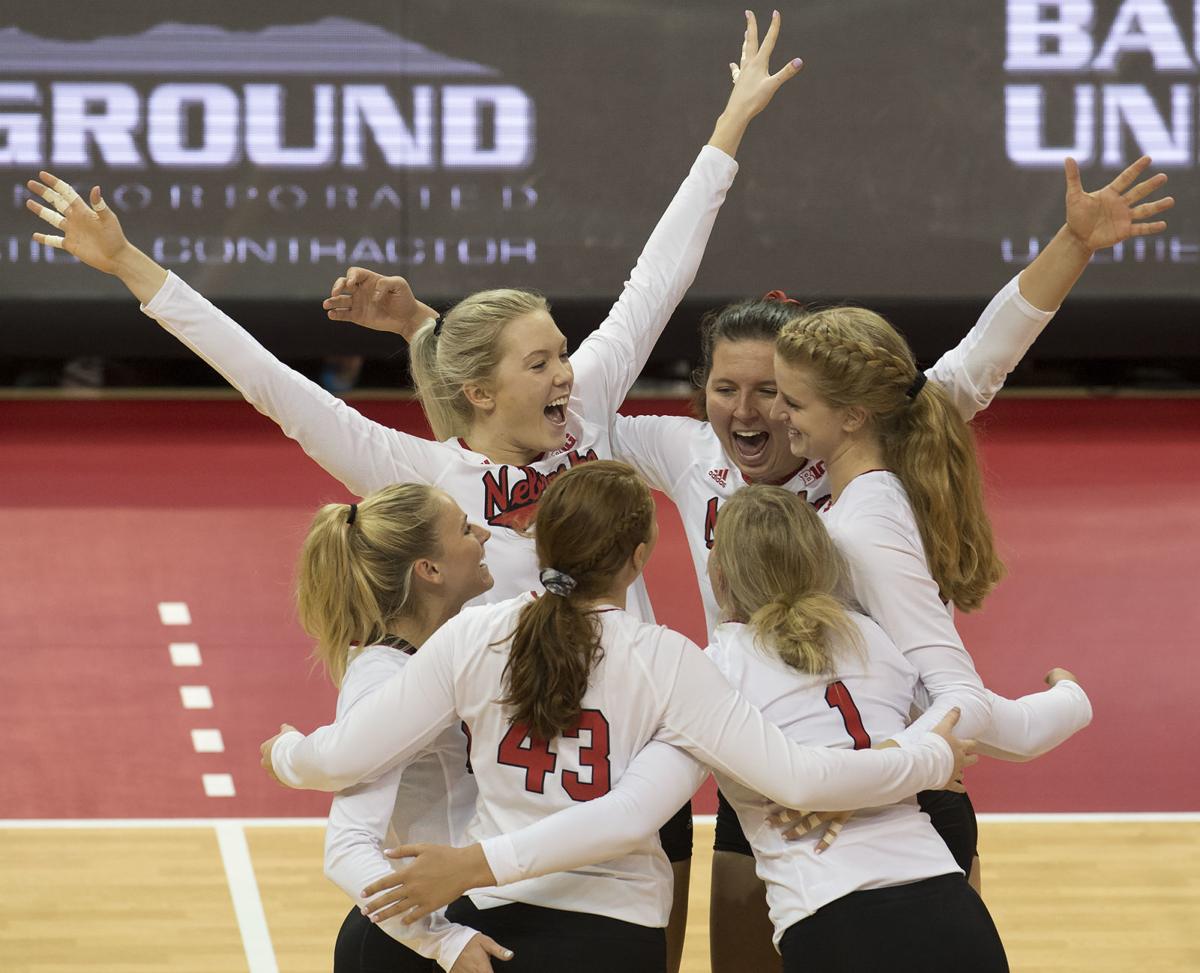 Nebraska players celebrate a point against Central Michigan in the third set of a Husker Invite match Friday at the Devaney Sports Center.

We now know the answer to the most asked question about Nebraska volleyball this season. The answer is that Lexi Sun played her first match of the season Friday.

After an injury that kept the sophomore outside hitter out of the first eight matches of the season, Sun played on Friday evening in the Huskers’ 23-25, 25-12, 25-20, 25-11 victory against New Mexico.

There was no easing her into it. Sun played the whole match and tied for the team lead with 13 kills, coming on .346 hitting. She also had an ace serve, two blocks and five digs.

Sun was the highest-profile transfer in college volleyball in the offseason, with the national champion Huskers adding the No. 1 ranked recruit in the 2017 class who would be able play without sitting out a season. As a freshman last season at Texas she was a unanimous first-team all-Big 12 selection when she ranked second for the Longhorns in kills with 377.

But when Nebraska opened practice she was limited in what she could do hitting. This was the first week she’s gone through full practices.

Nebraska coach John Cook says that for some time the goal was to have Sun play her first match this weekend.

“This week we went hard Tuesday and Wednesday and she went through the full practices and felt good, so we thought tonight would be the night to start it,” Cook said.

Sun probably could have played last week, Cook, said, but they wanted to build a strong foundation in hopes that she’ll be able to play all season.

Sun says she’s been getting anxious to play.

“I think I was just so happy to be out there and be playing volleyball and competing,” Sun said. “I think that it’s been a long time, and that’s one of my favorite things ever. I’ve been so antsy since I’ve gotten here to be able to play out there with the girls in front of such amazing fans. I was just so happy to be able to do that for the first time.”

Lexi Sun on her first match at Nebraska. Video: pic.twitter.com/DiwI97X8Rk

Sun had a kill on her first attempt, and then several more. She had a big cross-court kill on set point in the third to give Nebraska a 2-1 match lead. She was at her best in the fourth set, with six kills on seven attempts with no hitting errors.

Nebraska (8-1) has had a good season to this point, and is a season-opening loss against Florida away from being unbeaten and probably the No. 1 ranked team in the country.

Only time will tell what Sun allows the fourth-ranked Huskers to do, but Cook knows he likes what she adds to the Huskers’ attack.

“What I like about this lineup is we’ve got two outside hitters playing six rotations, which allows us to develop a back-row attack,” Cook said. “It wasn’t very good tonight, but that’s the beauty of it, and it allows us to use that double sub (with Anezka Szabo and Brooke Smith) a couple of times.”

Mikaela Foecke also had 13 kills. Freshman Callie Schwarzenbach had a career-high 13 blocks, the third-highest total by a Husker in the rally scoring era (2001-present), and the most by an individual in an NCAA Division I four-set match this season. The Huskers' 16½ blocks were their most since 2016.

The win against New Mexico was the 700th career victory for Cook. He became the 27th Division I coach to reach 700.

The Huskers swept past Central Michigan on Friday afternoon at the Devaney Sports Center. Photos by Gwyneth Roberts, Journal Star

For Nebraska volleyball team, choosing teams for a tournament is major balancing act

So the Nebraska volleyball team has chosen a weekend and is going to host a tournament.

Husker fans gave Filley's Carley Remmers, playing for Ohio against Nebraska at the Devaney Sports Center, a warm welcome when she was introduced as a starter in what was her final match.

Year 2 as a college volleyball player is off to a good start for Nebraska right-side hitter Jazz Sweet.

It took until the fourth week of the season, but Nebraska volleyball coach John Cook now has all the players available that he intended to have.

The first time that coach John Cook saw Lexi Sun hit a volleyball as a Nebraska player she was hitting soft shots while standing on a big, woo…

Outside hitter Lexi Sun played her first match for Nebraska on Sept. 14 during the Huskers’ four-set win against New Mexico at the Devaney Sports Center.

Nebraska players celebrate a point against Central Michigan in the third set of a Husker Invite match Friday at the Devaney Sports Center.