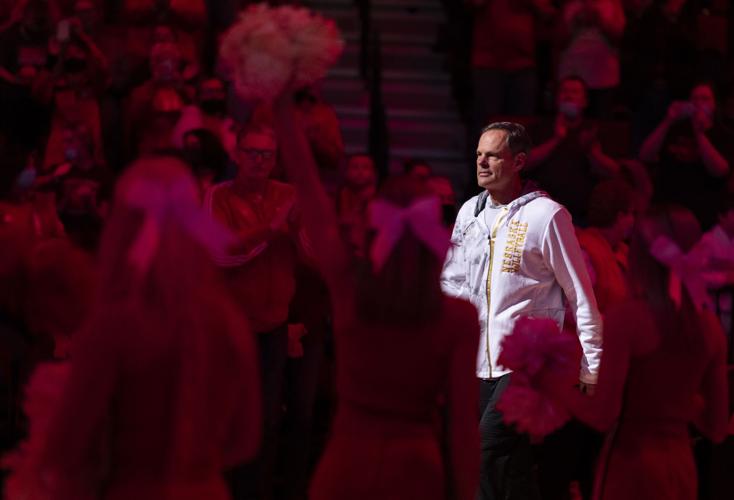 Nebraska volleyball coach John Cook walks onto the court after being announced with the national runner-up team at halftime of the Nebraska-Drake women's basketball game Dec. 19 at Pinnacle Bank Arena. 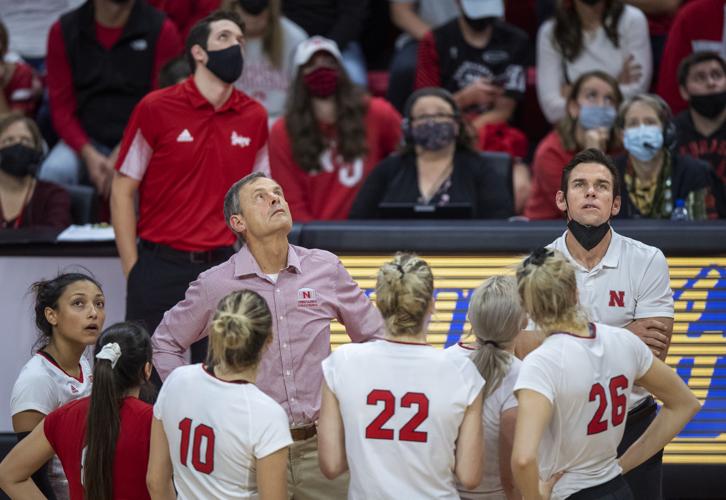 This past summer, he was with his dog hiking in Wyoming when he encountered some Nebraska fans.

"As we're leaving the conversation and going our separate ways, the dad in the group goes, 'You're not going to retire are you?'" Cook recalls. "I said, 'I don't know, it's pretty nice up here.'

Revisiting early-season grumbles about the Huskers and John Cook, who has his team back in the national title match

At the time, of course, the job was open. Bill Moos surprised a lot of people in late June by retiring. It was a surprise to people because he had said in May that he had no intention of leaving his post before his contract expired Dec. 31, 2022.

Then, poof, he was gone from our midst, along with an eyebrow-raising $3 million payout.

At any rate, Cook's name became prominent in speculation on potential successors. After all, he's the 65-year-old coach of the Nebraska Athletic Department's most successful program at the moment. He's a genuine icon in his sport, and he's enormously respected throughout our state — including by other Husker coaches throughout the department.

Long story short, Cook interviewed for the AD job, he said Tuesday during an extensive interview on "Early Break" (93.7 FM). He told UNL Chancellor Ronnie Green that if he could help Nebraska athletics, well, perhaps he would give the job a shot.

"I'm an older coach, I've been here, I've had success, and that model's worked with Coach (Tom) Osborne," said Cook, alluding to Nebraska's athletic director from 2007 to 2013.

Cook then told us something that might speak to why Moos is gone from our midst.

He also told us something that might speak to why Trev Alberts ultimately was hired for the position.

"So, yeah, I did have an interview, and it was a great process to go through. But I can tell you this: When I was leaving the interview, I turned to Ronnie Green and said, 'I hope we're interviewing Trev. He's really the guy we need to get.'"

Now, I'm not sure Alberts needed an endorsement at that point in the process. But if Trev did need an endorsement, he received about as good of one as you could imagine.

"But if Trev wasn't interested," Cook continued, "I would've done it in a heartbeat because I just felt like (with) Nebraska athletics, we were on the edge of the cliff. We had to do something. We had to get somebody in here to build the Athletic Department back up.

"I've worked with a lot of ADs at Nebraska. Bill Byrne, who hired me, was great. Coach Osborne, you know, I would've run through a wall for him. But I think there's been a real lack of leadership."

Enter Alberts into the discussion. With his family by his side, and coaches and his mentor (Osborne) there, too, Alberts was introduced July 14 as Nebraska's 14th athletic director. He had led the University of Nebraska at Omaha Athletic Department for 12 years.

Cook is an enthusiastic football fan, and Alberts' background as a unanimous All-American pass rusher at NU in 1993 means something to him.

Alberts' engine runs hot when it comes to competition, as does Cook's.

Alberts operates with a high degree of discipline, as does Cook.

Alberts genuinely cares about the state, as does Cook.

I could go on.

"I thank my lucky stars every day that Trev's our guy now," Cook said. "He's another guy you'd run through the wall for. He gets it. So, it worked out great. I'm really happy. I think Trev's going to do great things. The guy's a competitor."

Edge of a cliff? Something obviously wasn't passing muster in the Moos-led Athletic Department, at least in Cook's eyes.

But it probably makes more sense today to look forward than backward.

What does Cook see in Alberts that makes the four-time national champion coach so confident in the future?

"I mean, he was a great athlete," Cook said. "He was on ESPN, so he's got style and charm or whatever. He's got the 'it.' He looks you right in the eye. 'What do you need? What do you need to get this done?' He talks about winning now."

"One of the things that I'm really passionate about is performance," Alberts told the Journal Star. "I think an underlying, consistent communication about competitive excellence hasn't been enough of our narrative as a department."

"Well, with all of our core values, everything has to be about winning," he said. "We're in the competition business."

Cook, coming off a runner-up finish in the NCAA Tournament, obviously embraces the competition business.

He noted Nebraska is making gigantic financial investments in facilities.

"We need to have better results," Cook said. "(Alberts) wants to win, and to have somebody in a leadership position who's setting that tone (is important) — and I mean for everybody. I'm not talking just about coaches. I'm talking about everybody who works in the Athletic Department. He's questioning everything we've been doing in the Athletic Department: 'Is this elite?'"

Even the legendary volleyball coach sounds as if he's got a bit more zip.

As transfer portal frenzy nears lull, where do the Huskers still need 'difference-makers?'

The mad rush for mid-year enrollees is over. Now begins the searching — and waiting — for potential summer additions.

Reyes has been key to Nebraska’s success in recruiting and with coaching Nebraska’s back-row defense.

No question, former Nebraska safety Daniel Bullocks' comfort level with his Niners' safety crew is high. You can hear it in his voice. You hear excitement, too.

A contingent of Nebraska coaches visited one of the last remaining high school 2022 targets for the Huskers on Tuesday.

Alberts on the radio: Many end zone bleacher seats to be widened at Memorial Stadium for 2022

As Trev Alberts and the Nebraska Athletic Department begins to sift through survey results, one change to Memorial Stadium is coming immediately.

More from the AD, and the next stop on Nebraska's recruiting tour being a talent-rich area the Huskers have struggled to gain a foothold in lately.

See who Nebraska is expecting to host at its junior day event this weekend.

Riley was talked about as a potential starter when he arrived on campus in the winter of 2020, but he never could find consistent playing time.

With 16 midyear enrollees joining the mix, the Huskers have infused new blood into nearly every part of the roster.

John Cook always thinks "we" over "me," but at age 65 he's jumping into the world of name, image, likeness in college athletics, just another challenge for an incredibly successful college coach.

'I was like, ‘Is it OK if I come here?’': How Nebraska volleyball added a three-time All-American

Kaitlyn Hord, who was an All-American middle blocker at Penn State, announced Sunday afternoon that she is transferring to Nebraska.

Nebraska volleyball coach John Cook walks onto the court after being announced with the national runner-up team at halftime of the Nebraska-Drake women's basketball game Dec. 19 at Pinnacle Bank Arena.