Senior outside hitter Lexi Sun had a season-high 17 kills to lead the No. 4 Nebraska volleyball team to a 25-23, 25-15, 25-22 victory against Illinois on Friday in Champaign, Illinois.

It was a good match for both Husker outside hitters. Sun was able to get kills both when Nebraska got a good pass and also on the challenging out-of-system attacks. She had just four hitting errors over 38 attempts for a .342 hitting percentage. Sun also had three blocks, six digs and an ace serve.

Outside hitter Madi Kubik added nine kills on .250 hitting and had a team-best 11 digs.

Sun sets the tone for the Huskers, Nebraska coach John Cook says, and it's even better when Sun and Kubik are both playing well.

“(The outside hitters) got to play well for you to be successful,” said Cook on the Husker Sports Network. “A lot goes through those guys, so that’s good to see.”

Nebraska’s middle blockers were also extremely effective. Kayla Caffey had seven kills without getting blocked or hitting out for a .636 hitting percentage. Caffey had the kill on match point to complete Nebraska’s third-set rally to finish the sweep.

Stivrins had success with all of her shots — quick sets in the middle, the slide attack and tips over the block. She had five kills on her first six attempts, and 10 kills after 13 attempts. Stivrins entered the match ranked fourth nationally in hitting percentage.

Nebraska (8-1) was playing its first match in about two weeks after its series last weekend was postponed due COVID-19 issues within the Wisconsin program. Nebraska’s last match, a three-set win against No. 5 Minnesota, was its best match of the season, and the Huskers played well again on Friday for a second consecutive sweep and sixth overall.

Nebraska had a .282 hitting percentage and held Illinois to .153 hitting.

In the clinching third set, Illinois led 19-17 before Nebraska won eight of the final 11 points of the match.

Illinois (2-7) has lost seven straight matches while playing all of the top teams in the Big Ten (Wisconsin, Penn State, Ohio State and Nebraska).

In the first set, Nebraska trailed 15-12 before Hayley Densberger came on and served a 5-0 run to give Nebraska the lead. Sun was also great during that stretch with three kills and a block.

Illinois’s serve-receive struggled in the second set, allowing the Huskers to get out to an 11-6 lead and easily win the set.

Husker junior setter Nicklin Hames had 33 set assists and reached the 3,000 career assist milestone during the match. The three-year starter from Maryville, Tennessee, is the just the 10th Husker with at least 3,000 assists.

Freshman defensive specialist Kaylei Akana had 10 digs for NU and elevated the Huskers’ play with her serving, defense and out-of-system setting, Cook said.

Nebraska’s only weakness attacking was at the right-side hitter position. Riley Zuhn started the match, but Jazz Sweet replaced her in the second set after Zuhn was held without a kill on eight attempts and had no blocks.

Sweet didn’t have a kill on two attempts in the match but finished with two blocks. 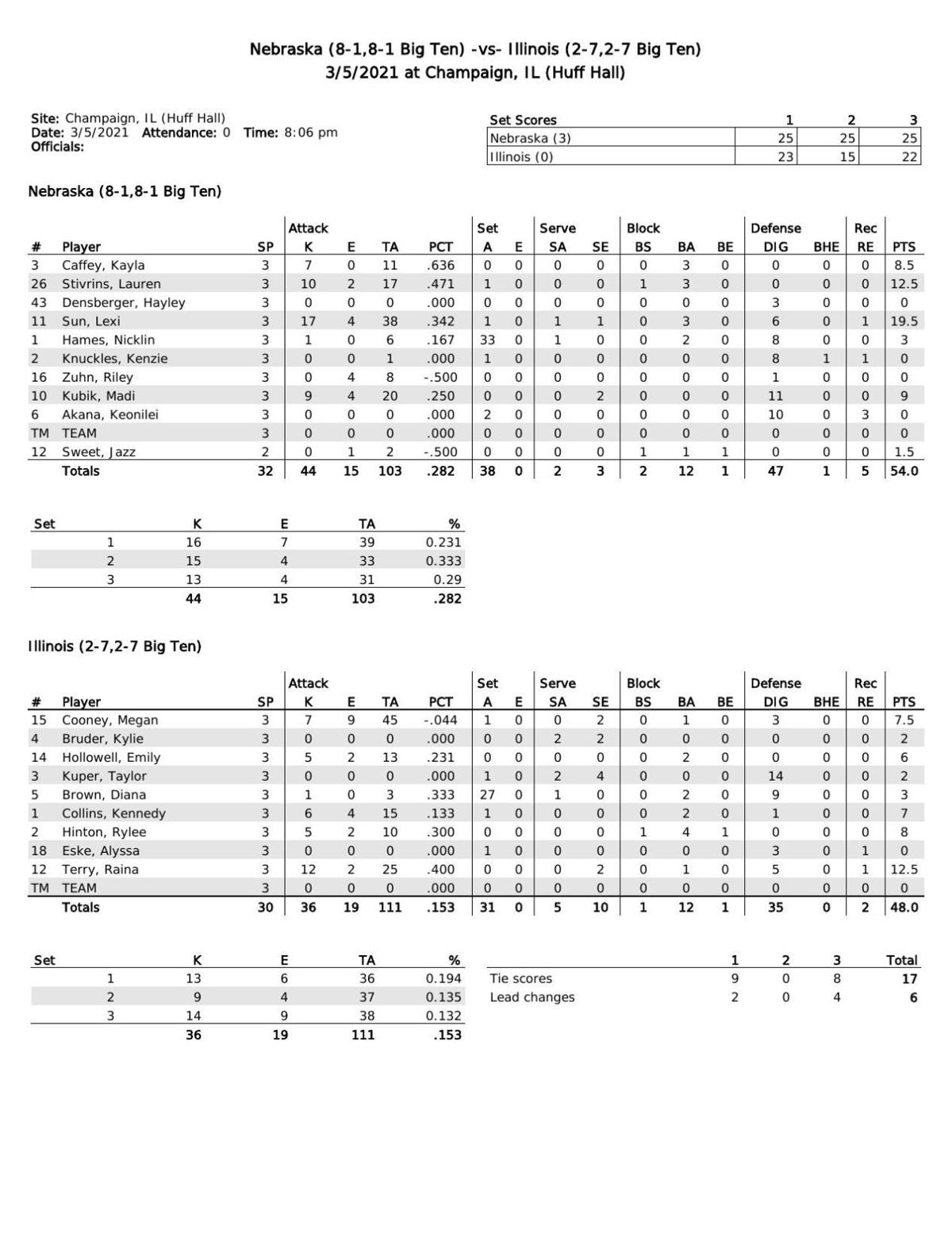 Nicklin Hames and her Husker teammates know to brace for bad news when a particular text message from John Cook chimes their phones.