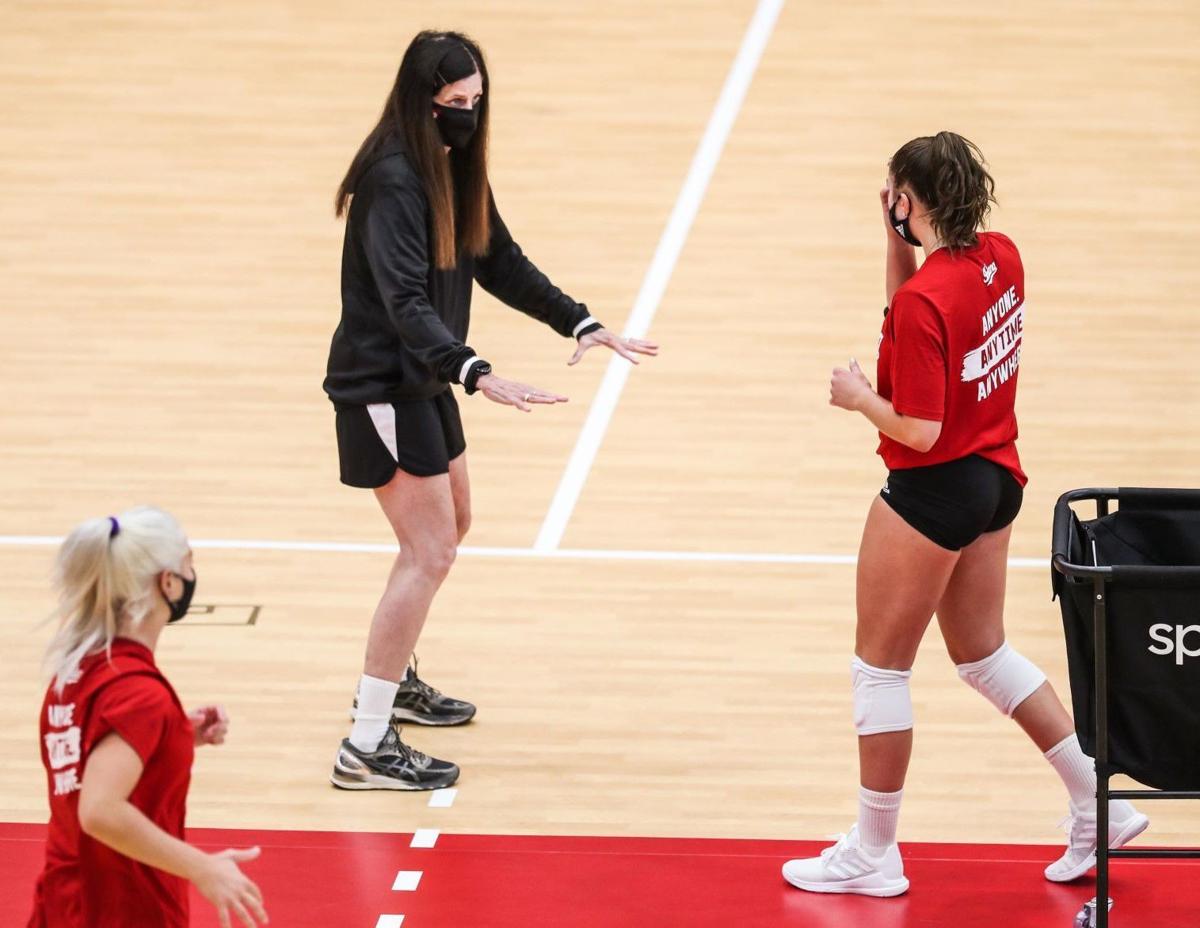 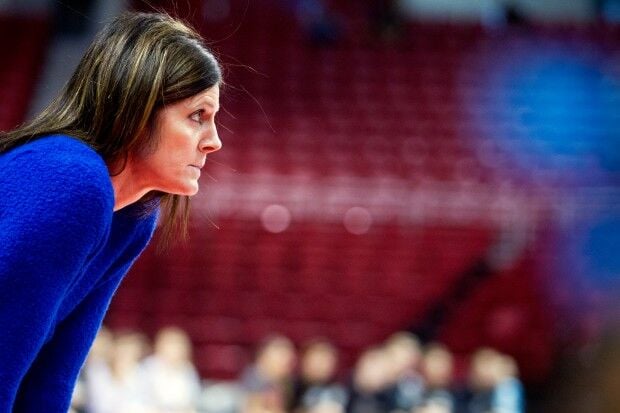 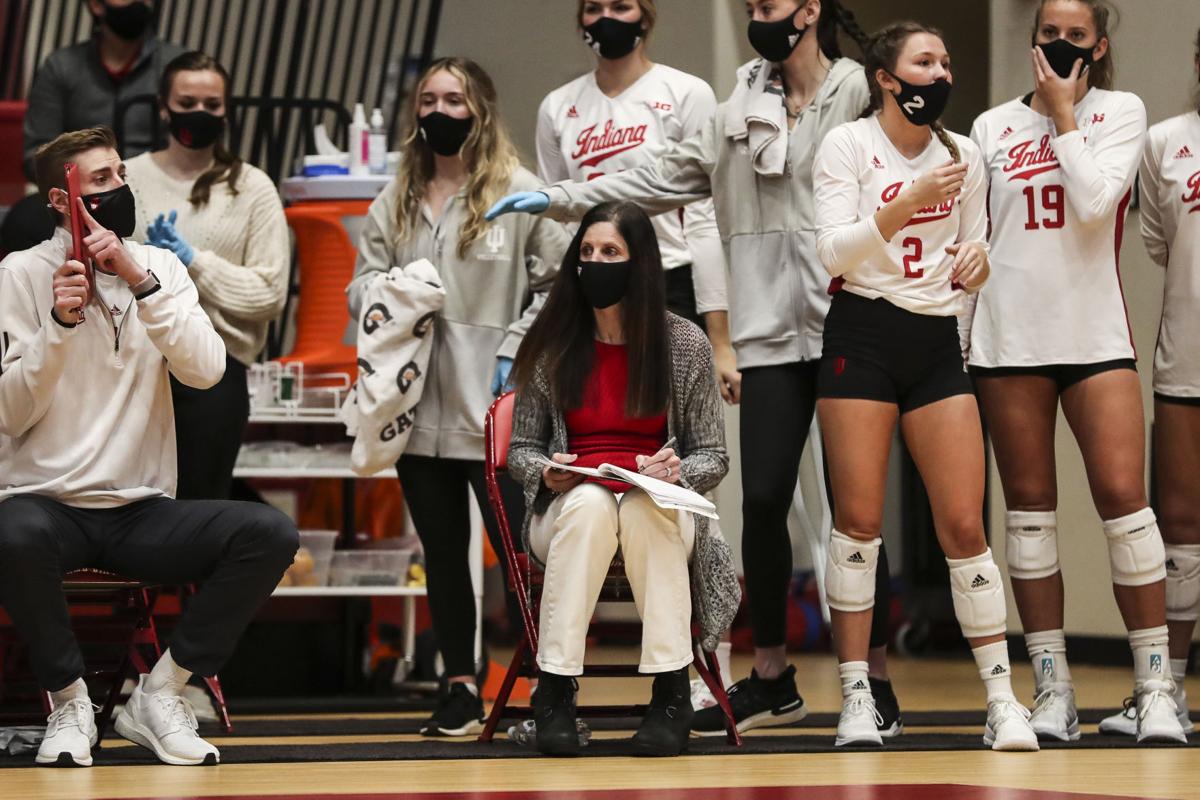 Volunteer assistant coach Gwen Egbert during a match between Nebraska and Indiana in Bloomington on Jan. 23, 2021.

One of the biggest names around the Nebraska volleyball scene popped back up in the sport a few months after she retired after leading Doane for seven seasons.

And while Gwen Egbert is no longer coaching in the state she did for more than 35 years, she won’t be completely out of sight of volleyball fans in the Nebraska. Egbert’s next act is as a volunteer assistant coach in the Big Ten Conference with Indiana, the team that Nebraska began the season against this weekend with two matches in Bloomington, Indiana.

So Egbert’s first match on an NCAA Division I bench in more than three decades came against her alma mater. Egbert played for the Huskers in 1981 and ’82.

She’s better known for having been the head coach for a couple of the state’s best high school programs at Papillion-La Vista and then Papillion-La Vista South. Egbert won 680 matches and six Class A state titles — three at each school.

As a high school and club coach, she coached players who became some of the Huskers’ best players, including Jordan Larson, Allison Weston, Lauren Cook, Kelly Hunter, Kadie Rolfzen and Amber Rolfzen.

Egbert retired as Doane's coach after the 2019 season. But she didn’t plan to sit out long. She'd always wanted to be a volunteer coach for a Division I program.

“At this point, I don’t want to be a Division I (head or full-time assistant) coach because I don’t want the responsibility of that. That’s a huge thing,” Egbert said. “I kind of just want to downgrade my role, and I want to be able to help a program that’s kind of on its way up. And I want to experience a season of Division I volleyball, traveling and being there for the game plan and helping develop kids and seeing them get better. I want to be a part of something like that.”

Also, college teams have only three full-time coaches, so if Egbert took one of those jobs, she’d have to recruit, and she didn’t want that.

“I just want to be in the gym, help with game planning, help with training and do camps in the summer when we’re trying to develop kids,” Egbert said.

Egbert also wanted to experience volleyball in a new part of the country. She had worked camps for the Arizona college team and was considering going there. But after an illness in her family, she chose to stay closer to her parents in Michigan.

Egbert has known Indiana coach Steve Aird for about 15 years. Back then Aird was working for a company that ran volleyball camps and coaching clinics, and Egbert would work some of those camps. So for about five years Aird and Egbert traveled together to work camps across the country.

Aird later became the head coach at Maryland, and then Indiana.

In choosing her next move, Egbert also liked the idea of joining a young team, and the Hoosiers have eight freshmen.

Each Division I program is allowed to have one volunteer coach, but in many cases, it’s someone just out of college or trying to break into college coaching after being a high school or club coach.

This is the first time since 1984 that Egbert has had an unpaid coaching job. That was also her only other time as a Division I coach, as a graduate assistant at Nebraska. After that, she took her first high school job at Papillion-La Vista.

Volunteer coaches usually commit to two years at a program. After that, Egbert may stay at Indiana or become a volunteer coach elsewhere. She’s reached the point in her career when she can “kind of do what I want.”

“I’ve worked really hard for a long time and this is kind of nice to be in a secondary role where everything isn’t on you every day,” Egbert said. “If Steve needs me to do something I can do it, and I’ve done it before and it takes one more thing off his plate.”

Some of Egbert’s responsibilities include working with the setters and helping with scouting reports.

A longtime high school and college volleyball coach in Nebraska and a former Husker volleyball player is joining a Division I staff.

The introduction of the starting lineup for the Nebraska volleyball team doesn’t offer much variety.

At first, the York standout thought she would like to get away from the Midwest. Then she visited South Dakota State's campus.

Sparked by Opfer, No. 10 Concordia finishes off Xavier to advance at NAIA Tournament

For the second year in a row, the Concordia volleyball team is headed to the final site for the NAIA Tournament.

Volunteer assistant coach Gwen Egbert during a match between Nebraska and Indiana in Bloomington on Jan. 23, 2021.