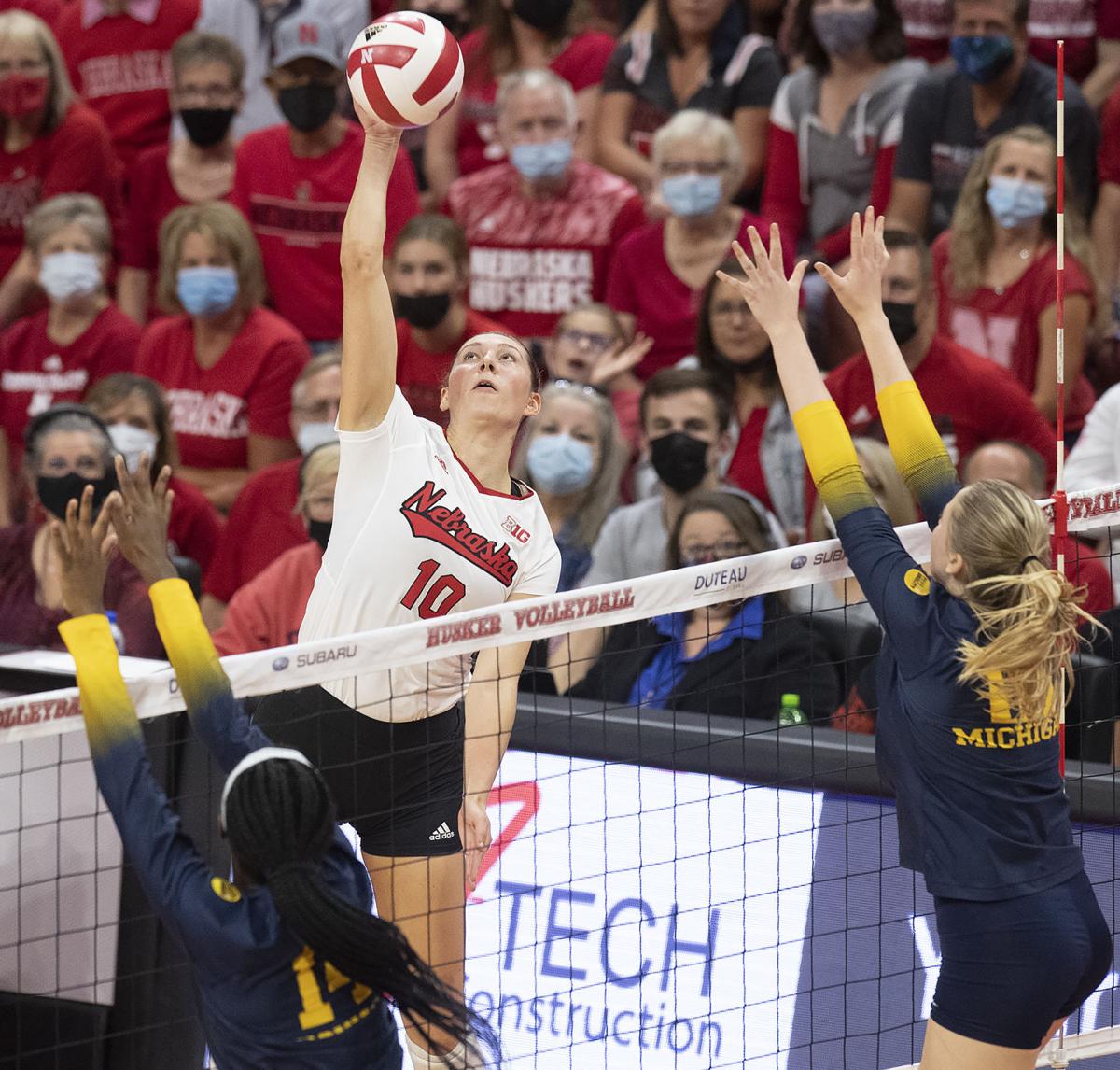 Nebraska's Madi Kubik hits over Michigan's Jess Robinson and May Pertofsky (right) on Oct. 1 at the Devaney Sports Center. 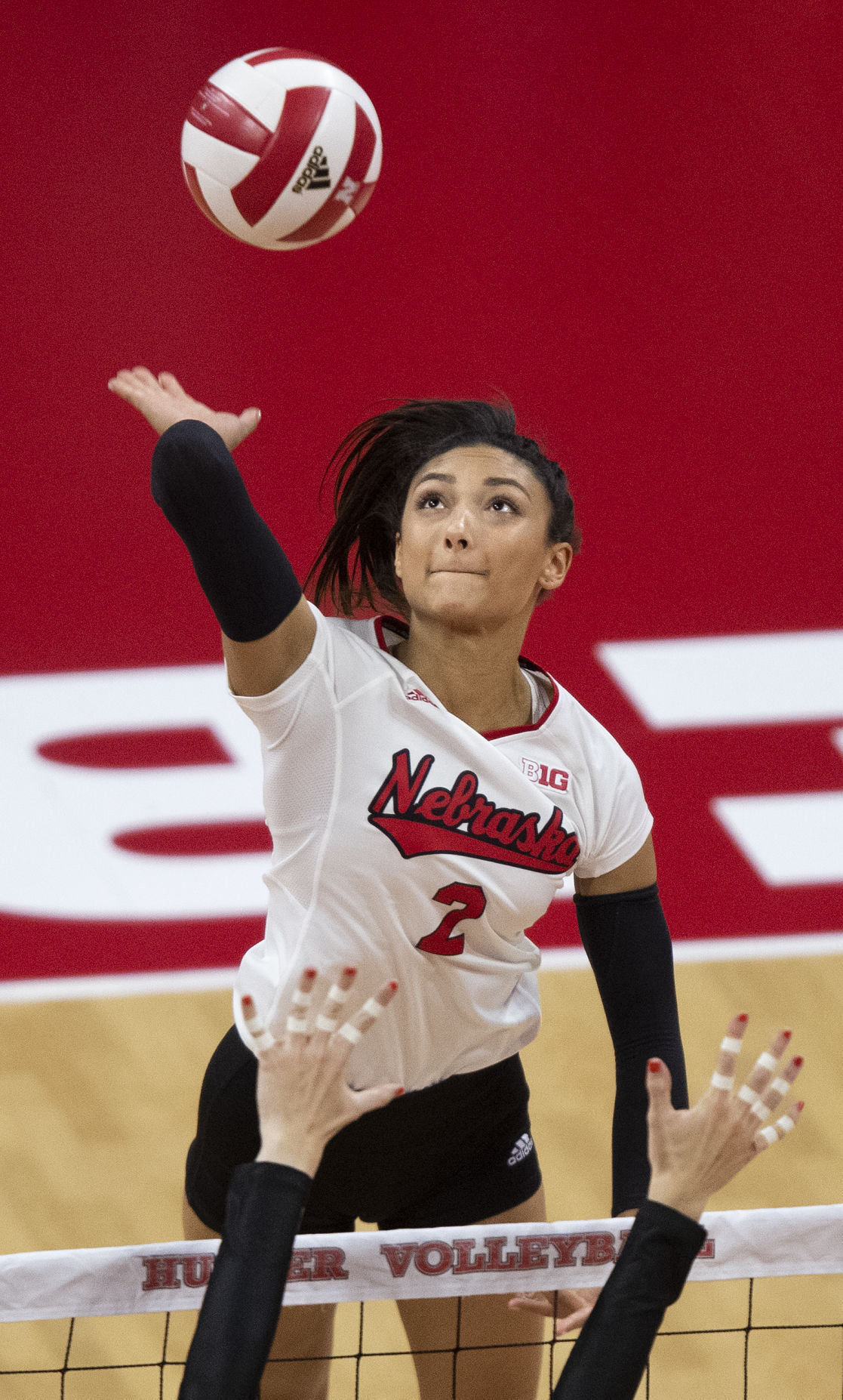 Nebraska’s Kenzie Knuckles elevates on a back-row attack during a match against Iowa on Sept. 25.

The Nebraska volleyball team is benefiting in a big way from another second-half surge from Madi Kubik.

The junior outside hitter from West Des Moines, Iowa, has been on a tear since the Big Ten Conference season began, leading the Huskers in kills in seven straight matches.

And No. 9 Nebraska hasn’t lost during the conference season, leading the Big Ten with a 7-0 record entering Saturday’s match against Illinois (12-6, 4-3 Big Ten) in Lincoln.

During the Big Ten season, Kubik is averaging 4.39 kills per set with a .270 hitting percentage, a significant improvement from her averages of 2.19 and .197 during the opening nine matches of the season.

During Nebraska’s 3-0 win against Indiana on Wednesday, Kubik had 16 of the Huskers’ 46 kills.

Kubik is finding different ways to get kills, including hitting shots off the blockers, shots down the line and back-row attacks.

Nebraska coach John Cook likes how Kubik has elevated her play during the league season.

“We saw this her freshmen year. She at times was really good,” Cook said. “She was the Big Ten freshmen of the year. Last year, I don’t know if she ever really maxed it out, and I think she’s on a mission to be great. She’s worked really hard and she plays a big role for us, so I think she’s embraced that.”

During the Big Ten season, Kubik ranks second in the league in kills per set (4.39), which is better than some of the big names in the league such as Minnesota’s Stephanie Samedy and Ohio State’s Emily Londot.

The Stivrins slide: Three-time All-American Lauren Stivrins returning to the lineup following back surgery also means the return of one of the best plays in the history of Husker volleyball — the Stivrins slide attack.

“(The slide attack is) probably the most difficult thing to defend in volleyball because the hitter is flying, so you don’t know where to set up the defense and the block because everything is on the move,” Cook said. “So if it’s executed, it’s very, very difficult. And Lauren has every shot in the book, so it makes it even harder.”

Stivrins is hitting .433, which ranks third in the Big Ten.

On a mission: The Huskers were pretty disappointed with how last season went, with six matches being canceled and the Huskers losing in the NCAA Elite Eight.

This year will probably be the last college season for most of Nebraska’s five seniors. So Cook senses the Huskers are “on a mission.”

“I just think they want to play well,” Cook said. “They want to be great, and that’s what they’re working on. They’re showing that in practice, and it’s carrying over into the matches.”

Knuckles on the attack: One new option for the Huskers this season is setting defensive specialist Kenzie Knuckles on back-row attacks.

Knuckles was an outside hitter in high school, but was grounded the past two years when she was Nebraska's libero. Now she’s free to hit. The success of Knuckles’ back-row attacks is mixed, but when it’s good, it’s really good.

“She’s really a crafty hitter,” Cook said. “She just really moves the ball, it’s deceptive, she’s moving at a different angle than other hitters. It’s way different than what teams are used to seeing. She really can move it around.”

Against Indiana on Wednesday, Knuckles was 2-for-4 on back-row attacks. She has 18 kills this season.

More challenges coming: Nebraska has played just one match against a ranked team so far during the Big Ten season, beating No. 13 Penn State last week.

As it stands now, Nebraska will play just two ranked teams in its first 10 league matches. But the schedule really ramps up in the second 10 matches of the Big Ten season. That's when Nebraska may play six matches against ranked teams, including two against No. 3 Wisconsin.

Nebraska's Madi Kubik hits over Michigan's Jess Robinson and May Pertofsky (right) on Oct. 1 at the Devaney Sports Center.

Nebraska’s Kenzie Knuckles elevates on a back-row attack during a match against Iowa on Sept. 25.