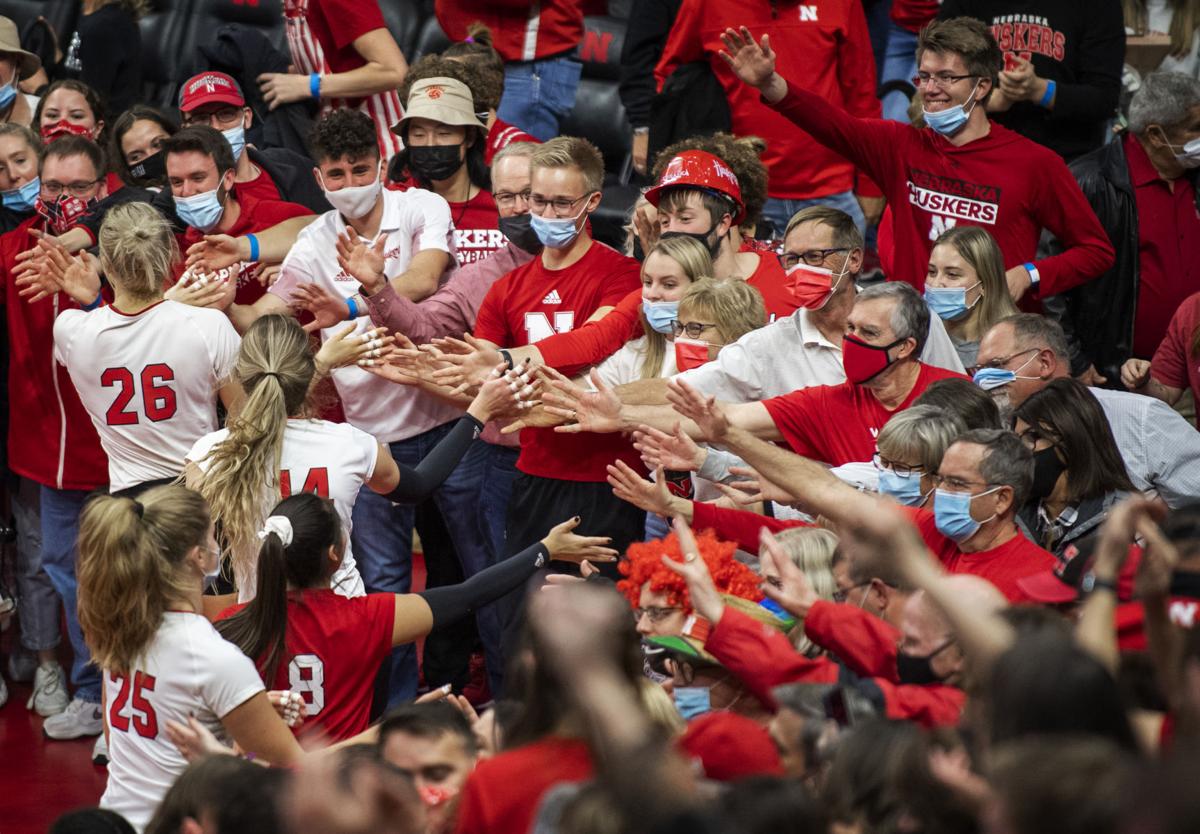 Nebraska’s Lauren Stivrins (26), Aly Batenhorst (14), Lexi Rodriguez (8) and Callie Schwarzenbach (25) greet fans following a win in their final match this season at the Devaney Center. Bar owners across Lincoln expect big crowd to turn out Thursday to cheer on the Huskers in the national semifinals. 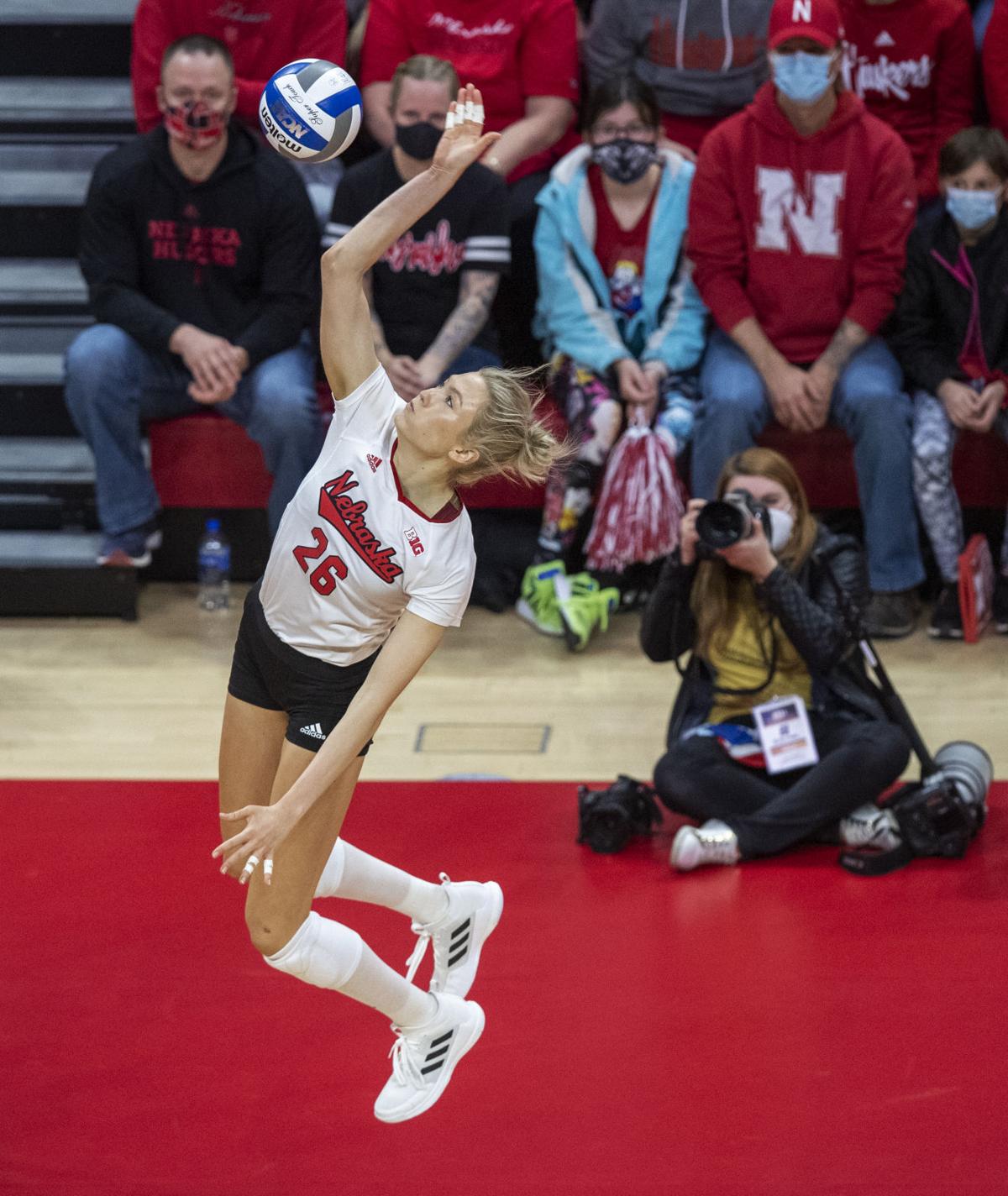 Nebraska’s Lauren Stivrins attempts a kill in the first set against Florida State on Saturday during the NCAA Tournament at the Devaney Sports Center.

When Kayla Caffey's ninth kill of the night hit the floor, a packed crowd of approximately 8,000 people exploded with joy, cheering a 3-0 Nebraska win against Florida State on Saturday.

Then they greeted the Huskers, who took a "victory lap" around the Devaney Sports Center, slapping hands with fans and celebrating one last home win this season.

The postgame interaction with fans is a tradition for the NU volleyball program that went by the wayside this season in light of COVID-19. Something about not wanting to touch dozens of strangers' hands.

Nicklin Hames called it a "spur of the moment" decision.

"It's always just us giving back to the fans; they support us through everything and through this long season and they've been there," Hames said. "Even though our trainer probably had a little freakout that we were high-fiving.

"We all washed our hands and had hand sanitizer."

For Ally Batenhorst, a freshman, it was her first time mingling with the masses.

"That was cool, I've never done that," she said. "It was fun just to see everyone and interact with them."

Huskers' office pool: Just in case anyone from the NCAA had ears on Nebraska's postgame news conference, John Cook wants to be clear.

There's no money involved in the office pool he and Husker staffers participate in, filling out NCAA Tournament brackets as many folks do in March for basketball.

"We had Illinois beating Kentucky … Big Ten was tough this year, really tough," Cook said. "Everyone talked about how tough the ACC was this year, they got these seeds, but we took care of business against Florida State."

On that note, consider Cook not surprised about the success of Big Ten teams so far in the tournament. Six teams from the conference — Ohio State, Purdue, Minnesota, Illinois, Wisconsin and Nebraska — advanced out of regionals.

Three teams from the ACC are moving on, but who's counting, right?

Add them to the list: It's been a familiar refrain for Nebraska's opponents this season.

A key ingredient in the Huskers' success this season has been on defense, a collective effort headed by Big Ten freshman of the year Lexi Rodriguez, who led four Huskers in double figures with 18 digs.

"Normally we are able to put down some of those balls and we were not able to put them down all the time, and that can weigh you down and be frustrating," Poole said.

1: Missed NCAA Tournament for the Huskers since 1993, as the team has reached the postseason 27 of the last 28 seasons.

16: Consecutive postseason wins at the Devaney Sports Center for Nebraska. John Cook said Saturday, "We do not take the fans for granted."

89: Straight NCAA Tournament wins for the Huskers when they jump out to a 2-0 lead in the match, as they did Saturday.

54: The kill count for Nebraska on Saturday, its highest total in a three-set match this season. Brent C. Wagner shines light on the Huskers' balanced approach.

The Nebraska volleyball had one of its most balanced attacks of the season during a 25-20, 25-22, 25-17 win against Florida State.

Camels coach Greg Goral knew the Huskers would present a big challenge, but he was pleased to play somewhere "where they truly appreciate volleyball.”

Boosted by their middles, Huskers take simple approach to put away Campbell in opening round

The Huskers held Campbell to a negative .022 hitting percentage, the lowest for a Nebraska opponent this season.

"That's the fewest hitters I've had since 1994," said Seminoles coach Chris Poole after his team snapped a three-year streak of first-round exits.

Lauren Stivrins’ grandma was a season ticket holder. Then her granddaughter became one of the stars of the Nebraska volleyball team

"Before Lauren came here I was known as Opal Stivrins, and now I am Lauren’s grandma," says the 82-year-old, who rarely missed a match during Lauren's first three seasons.

No. 10 Nebraska will play Illinois in a Sweet 16 matchup at 8:30 p.m. Thursday. If the Huskers win, they'll play the winner of Texas-Washington at 9 p.m. Saturday.

From a historic award to NIL deals, it's been a memorable freshman season for Lexi Rodriguez

She’s the sixth Husker ever to be named a conference defensive player of the year on a list that includes Olympians Justine Wong-Orantes and Jordan Larson.

Four former assistants of John Cook led teams to the NCAA volleyball tournament, and Nebraska's next foe has one of them in Chris Tamas.

Instead of playing on back-to-back days, teams will get an extra day off between matches.

'That's how we roll': Huskers wrap up sweep of Illinois behind defense, serving. Up next is No. 2 Texas

Nebraska jumped to a big advantage in the first set and rolled to a victory against the Illinois, setting up a regional final clash with Texas.

Nebraska’s Lauren Stivrins (26), Aly Batenhorst (14), Lexi Rodriguez (8) and Callie Schwarzenbach (25) greet fans following a win in their final match this season at the Devaney Center. Bar owners across Lincoln expect big crowd to turn out Thursday to cheer on the Huskers in the national semifinals.

Nebraska’s Lauren Stivrins attempts a kill in the first set against Florida State on Saturday during the NCAA Tournament at the Devaney Sports Center.