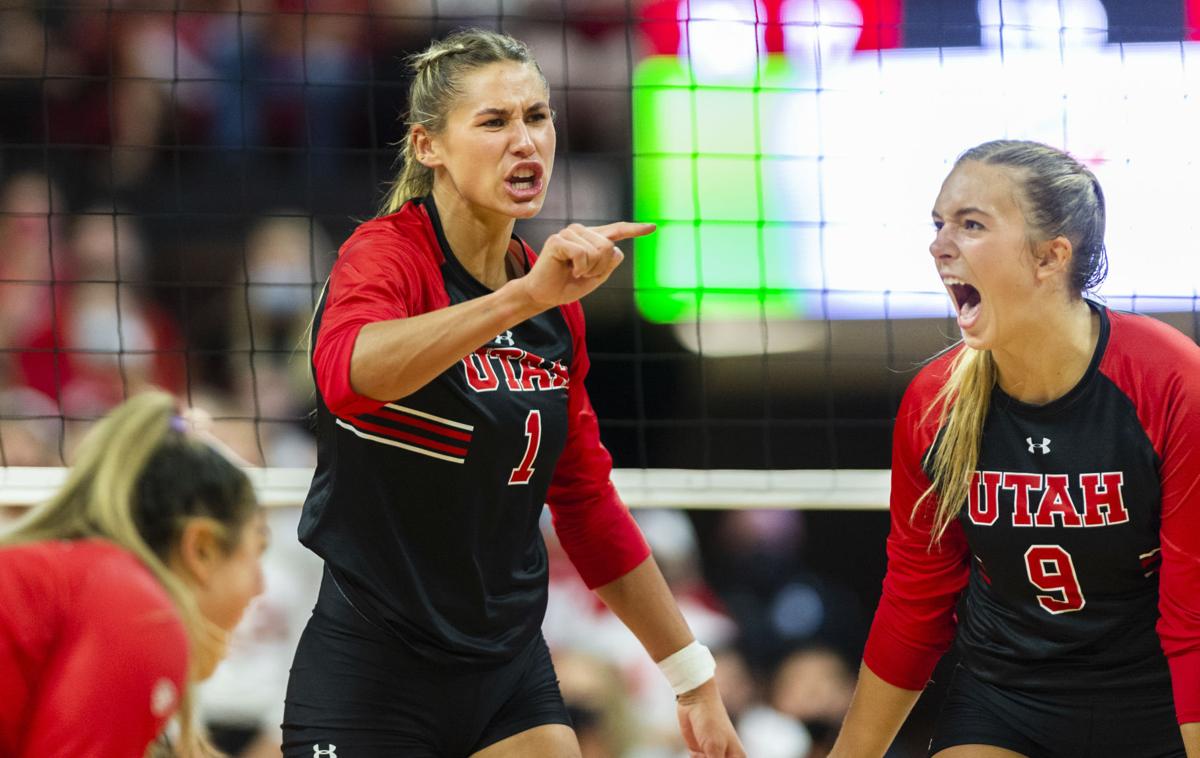 Utah's Dani Drews (1) and Stef Jankiewicz (9) celebrate a point against Nebraska on Saturday at the Devaney Sports Center. 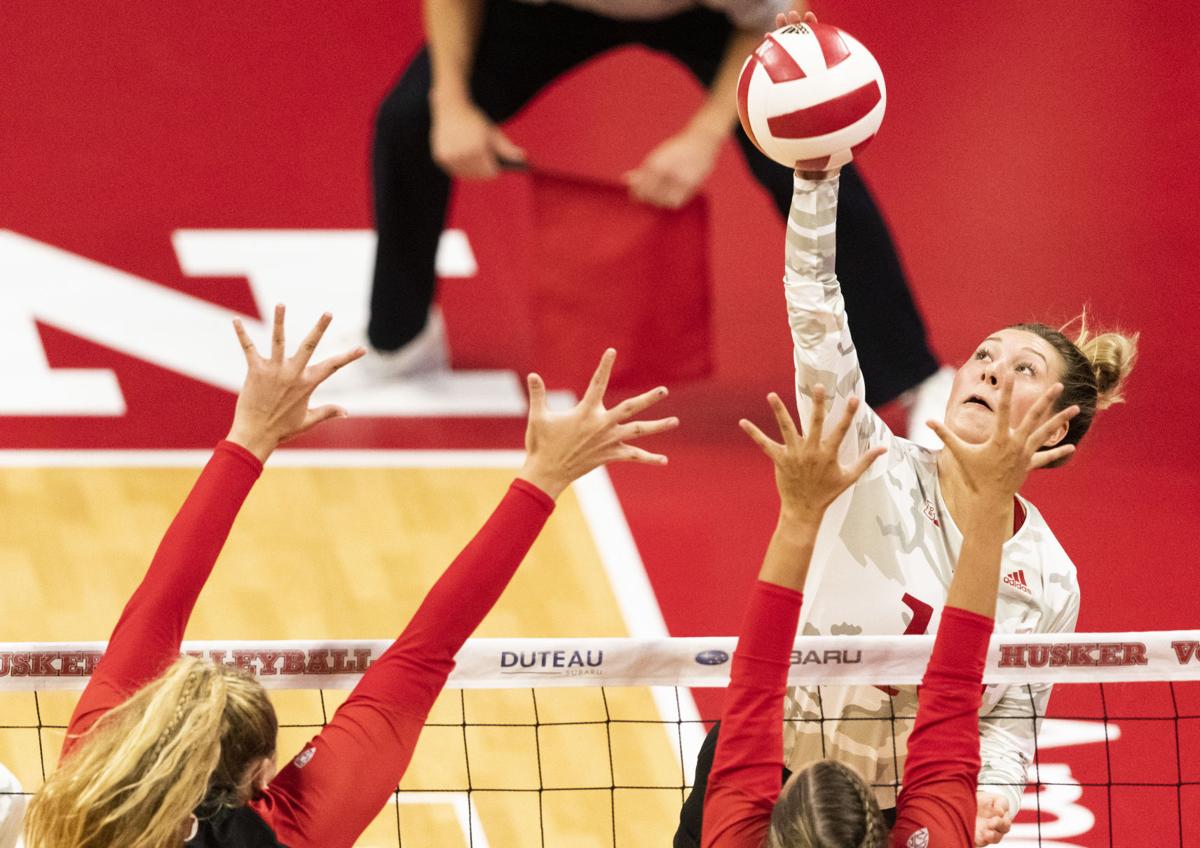 Nebraska volleyball coach John Cook said this week that Utah first-team All-American outside hitter Dani Drews would be the price of admission when the Utes played the Huskers on Saturday.

She was, and Drews and the Utah put an end to Nebraska’s undefeated start through the first 2½ weeks of the season.

Drews had a season-best 27 kills to lead No. 20 Utah to a five-set win against No. 3 Nebraska, giving the Huskers their first loss after a 6-0 start.

Nebraska nearly got away with a sweep, but lost a close third set and gave Utah life.

Drews, the Pac-12 player of the year last season, had some big swings for kills, but also beat the Huskers with tips and shots down the line.

“I told you Dani Drews was worth the price of admission,” Cook said. “She willed that team to a victory. I’m really impressed. The fans got their money’s worth and it was a great match. We had our chances to win it 3-0, and didn’t get it done. We let them back in it and they got us in the end. We just got to make a couple more plays.”

What also hurt the Huskers is that Utah also had the second-best player in the match, with right-side hitter Zoe Weatherington finishing with a career-best 17 kills on .286 hitting.

Drews is a good beach volleyball player, too, and showed some of her crafty shots.

“The ways she was getting kills was hitting right over our block, which she has a great tip,” Cook said. “But we were not doing what we were trained to do on it. And then she was tooling our block a lot. She was tooling Lindsay (Krause) a lot. But Lindsay got her in (set) five.”

In the deciding fifth set, Utah got out to a 4-1 lead, including another kill by Drews with a shot off the blockers. But Nebraska recovered with a 3-0 run including two kills from Krause to tie the set at four.

Nebraska played from behind for most of the set until another big finish. After Utah took a 12-11 lead on a kill by Drews, Krause got back-to-back kills, one coming after a Utah player tripped, to put Nebraska up 13-12. Utah won the next two points on a kill by Drews and Nebraska hitting out.

Setter Stef Jankiewicz had the kill on match point, with Utah ending the match on a 3-0 run for a walk-off win. The Utes celebrated on the court, and waved to their families sitting near the top of the arena. Utah hadn’t beaten Nebraska in four previous attempts.

Utah had 11 more kills than the Huskers, with Nebraska having 57 kills over 168 attempts.

“We were tentative at times tonight, and weren’t really getting good swings in long rallies like we need to, so that’s something we got to work on,” Cook said.

Utah libero Vanessa Ramirez had 21 digs. Nebraska needed to attack at the setter and down the line more, Cook said.

“When you hit the balls at the libero they got weapons they’re coming back with,” he said.

Krause started at right-side hitter and had her best match of the season, leading Nebraska with 15 kills and a .317 hitting percentage. She also had five blocks.

Ally Batenhorst had a season-high 10 kills after coming off the bench to replace Madi Kubik. Nicklin Hames had 39 assists and 17 digs.

Nebraska nearly got away with a 3-0 win. In the third set Nebraska had one set point, but Utah fought it off with a kill by Weatherington. Then she got another kill for a 26-25 lead. Lexi Sun hit long on set point, giving Utah the 27-25 set win.

“We gave it away,” Cook said. “We shanked two balls, and hit a couple of balls out. Bad misses. There was an emotional letdown there. We gave new life to Utah.”

Utah's 10 ace serves were the most for a Husker opponent this season. 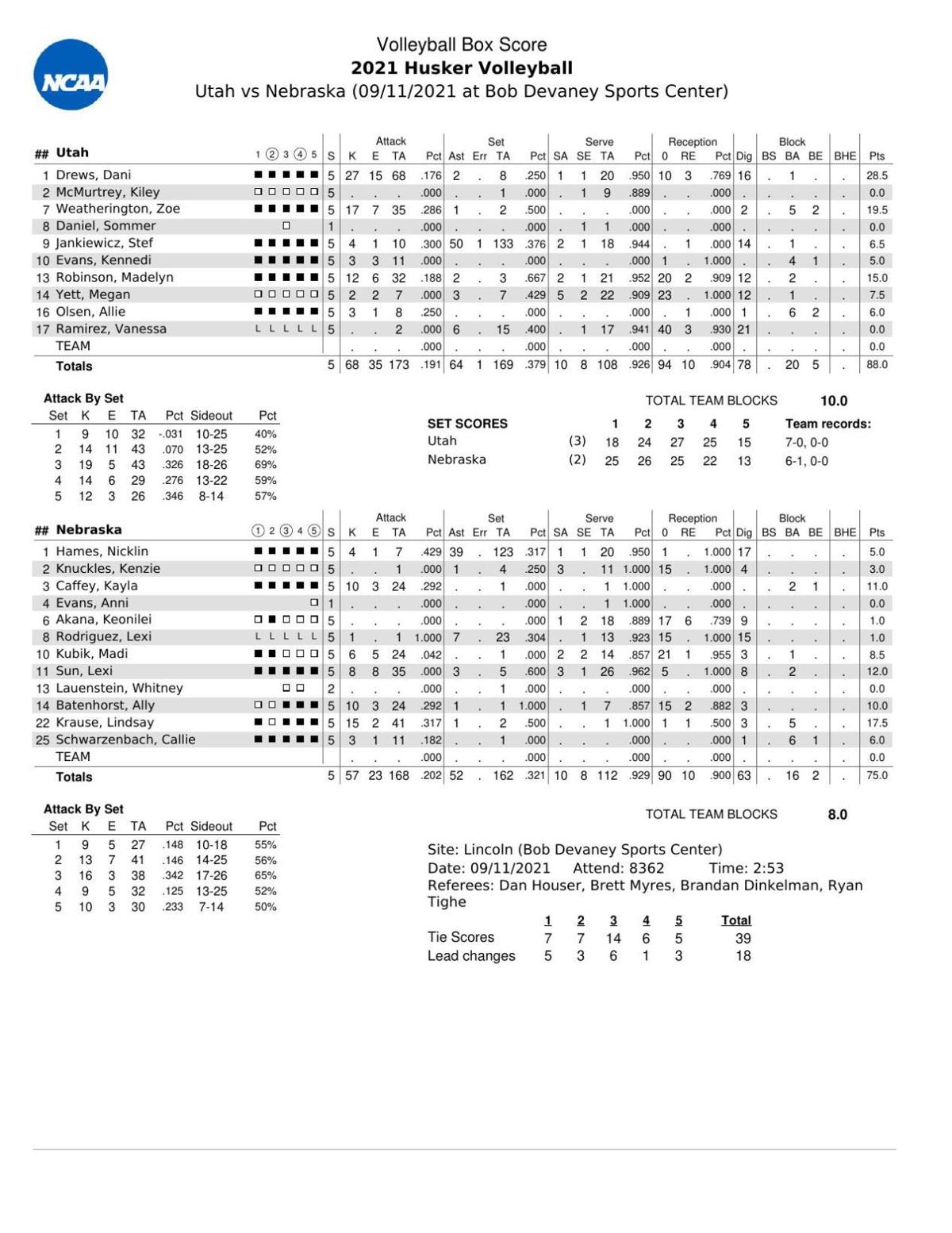 Photos: No. 3 Nebraska and No. 20 Utah battle in a five-set thriller

Utah's Dani Drews (1) and Stef Jankiewicz (9) celebrate a point against Nebraska on Saturday at the Devaney Sports Center.