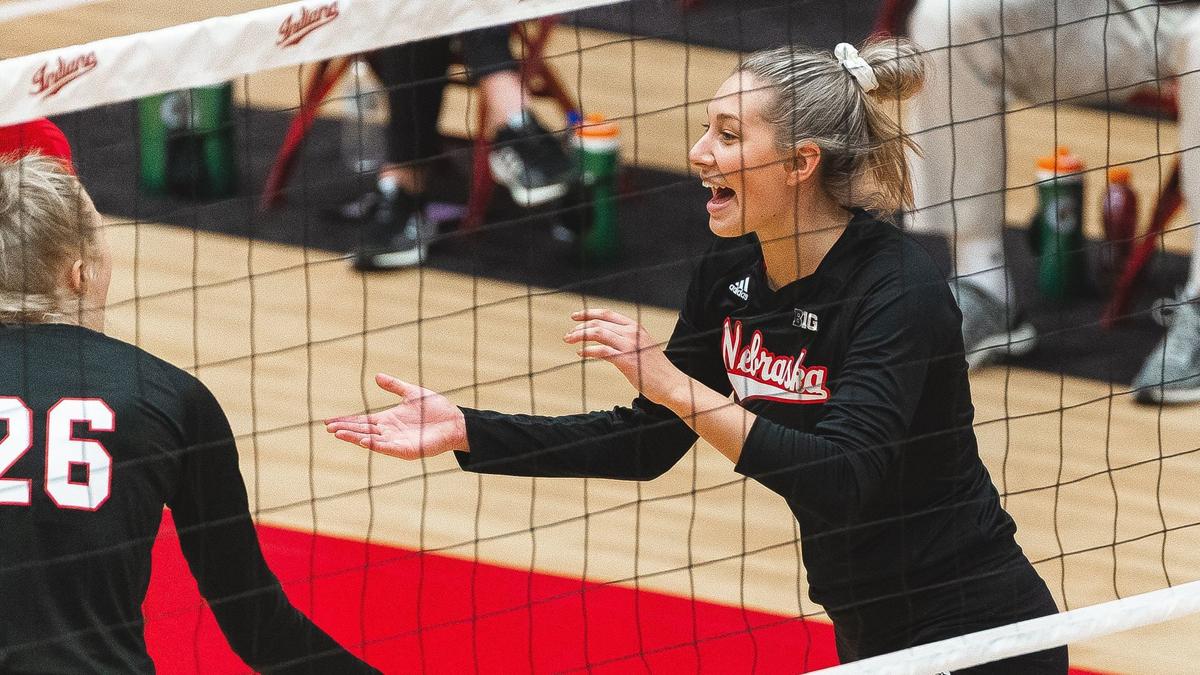 Madi Kubick (right) celebrates a point during the Nebraska volleyball team's sweep against Indiana on Saturday in Bloomington, Ind. 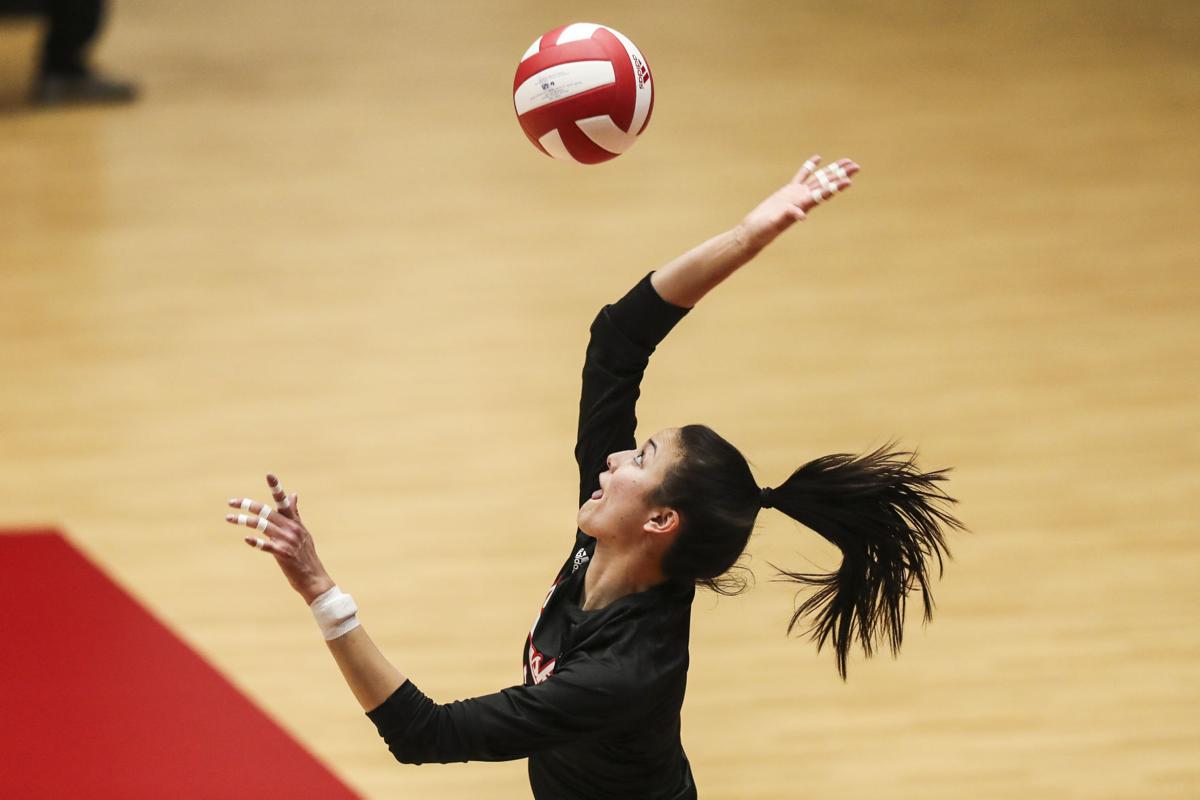 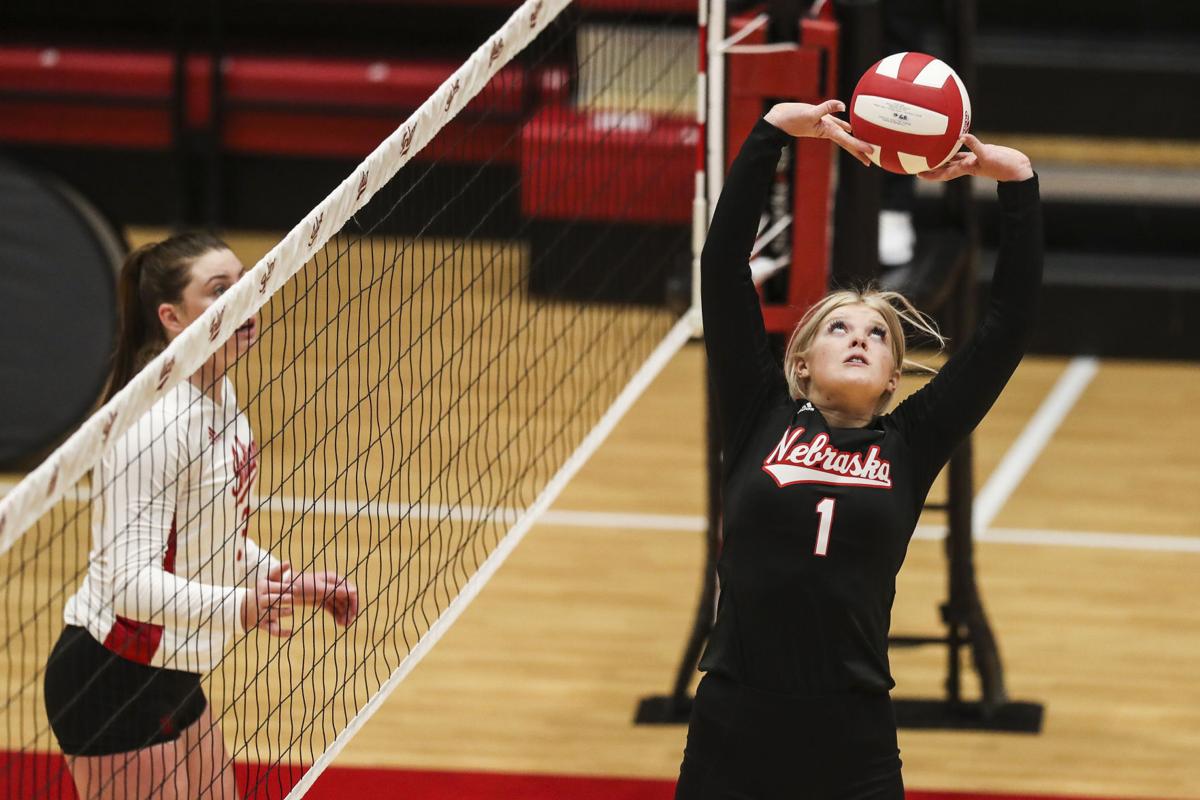 The opening weekend of the college volleyball season for Nebraska went without a hitch, as the Huskers won six straight sets over two nights.

In Nebraska’s second match of the season on Saturday, it dominated with defense in a 25-21, 25-16, 25-19 victory against Indiana in Bloomington, Indiana.

The fifth-ranked Huskers also swept Indiana on Friday. It was a tough matchup to start the season for Indiana, which has eight freshmen and was picked 11th in the Big Ten coaches’ poll.

“We’re doing some really good things,” said Nebraska coach John Cook on the Husker Sports Network. “We’re trying to do some creative things offensively so we saw some of that. We’re a little more high error than I expected, and maybe it’s (because it’s) the first weekend and we haven’t played in 13 months.”

Nebraska improved its defense on Saturday, with the Huskers having seven more blocks on Saturday than it did on Friday.

The Huskers didn’t have much to work with to make a game plan for the first match, but knew more of what to expect from the Hoosiers on Saturday.

“It was really good adjustments by our team and by our staff,” Cook said.

Lexi Sun led the Huskers again with 11 kills, and Madi Kubik had eight. Senior middle blocker Lauren Stivrins also dominated with seven kills on a .429 hitting percentage. On her first eight attempts of the match, Stivrins had six kills. She also had six blocks.

Nebraska changed its starting lineup slightly from Friday’s first match of the season, with Callie Schwarzenbach starting at the middle blocker spot where Kayla Caffey played on Friday. Cook's plan leading into the weekend was to have Caffey and Schwarzenbach both start a match. Schwarzenbach led the Huskers with six blocks.

Nebraska’s depth has been upgraded this season, especially at middle blocker, defensive specialist and right-side hitter, and Cook wants that depth to give the Huskers an advantage.

“You can’t play just six players for the next 11 weeks (with back-to-back matches),” Cook said. “We’ve got to get some more people in. I got Hayley Densberger in tonight. … We’ve got to start working some players in to get comfortable because I think you’re going to need it when you’re playing the same team back-to-back. We got a lot of players who can help us so I want to start getting them in matches.”

The end of the first set was close until Nebraska won the final three points to win the set 25-21.

Nebraska passed better to finish the set and won the final three points on a slide attack by Schwarzenbach, a cross-court shot by Sun and a kill by Zuhn on an out-of-system set by Kenzie Knuckles.

In the second set, Nebraska had kills on six of its first 10 hitting attempts to take a 13-7 lead and dominated the set. Nebraska’s dominance continued in the third set when the Huskers won the first six rallies of the set served by Nicklin Hames.

Knuckles led Nebraska with 12 digs, and Hames had eight.

After two matches Cook knows Nebraska’s serve receive needs to improve, and he’d like for there to be fewer hitting errors. But he’s happy Nebraska got to play both scheduled matches on Week 1.

“It’s fun to play instead of just practice all of the time,” he said.

* Nebraska has won 19 consecutive matches against Indiana dating to 1988.

* The Huskers will be at home next weekend with two matches against Northwestern, which has a 2-0 record after wins against Rutgers. Megan Miller, who played defensive specialist for Nebraska the past two seasons, is the starting libero for Northwestern. 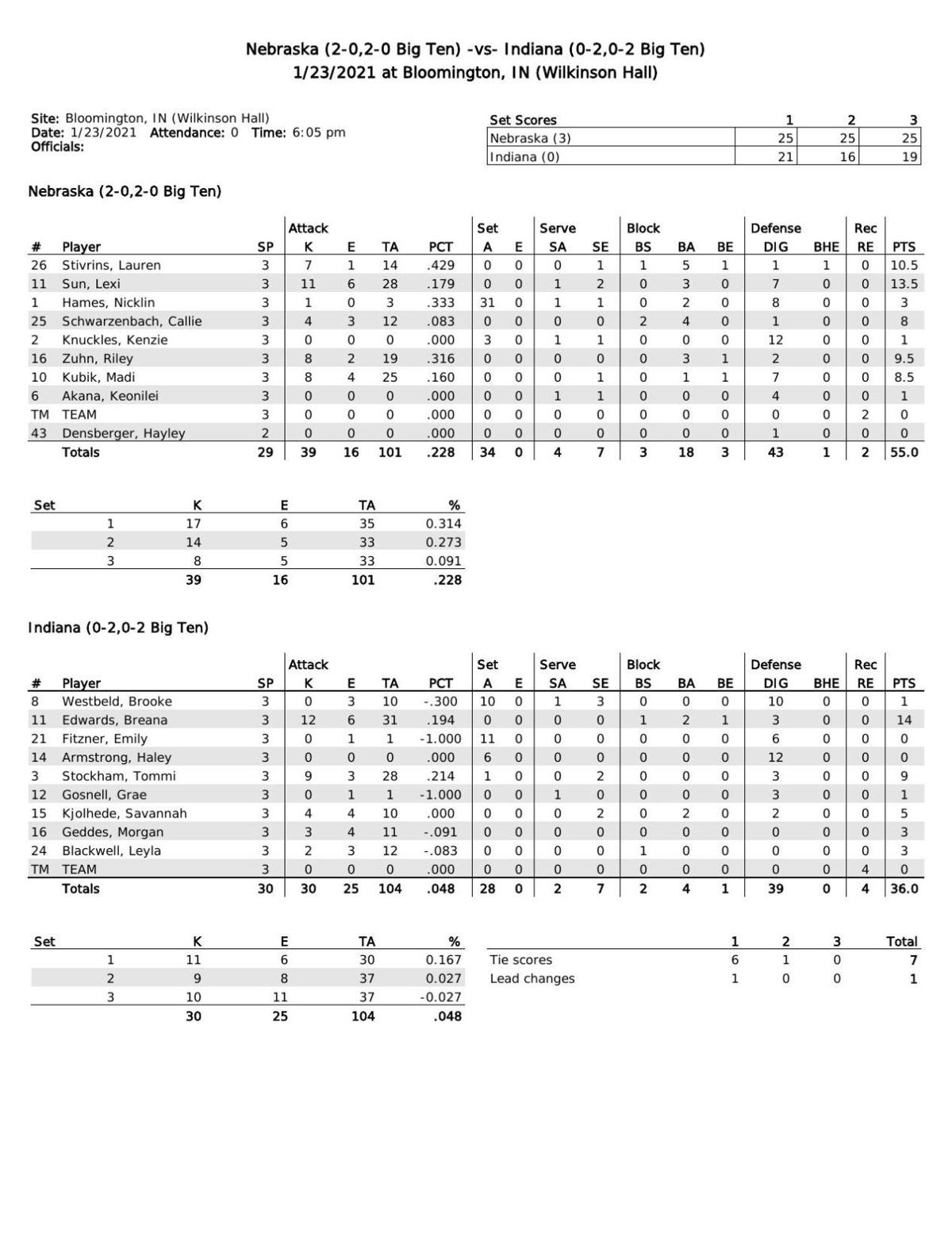 The CHI Health Center has already has been selected as the site of the Final Four. But now there's chatter that all 48 teams in the tourney might play their matches in Omaha in a coronavirus "bubble."

Madi Kubick (right) celebrates a point during the Nebraska volleyball team's sweep against Indiana on Saturday in Bloomington, Ind.