The Nebraska volleyball team tied a season-high with 10 ace serves during a dominating sweep (25-19, 25-9, 25-12) of Rutgers on Sunday in Piscataway, New Jersey.

No. 10 Nebraska has a six-match winning streak, which immediately followed a rare three-match losing streak.

Through three of 10 weeks in the Big Ten season, Nebraska leads the league at 6-0 — one match ahead of Wisconsin, Purdue and Penn State.

Rodriguez, a freshman libero, led the Husker defense with 17 digs.

Rutgers (8-9, 0-6 Big Ten) struggled to handle Nebraska’s serves so it wasn't able to get its offense going very often. Rutgers had just a .042 hitting percentage — the second-lowest for a Husker opponent this season — and didn’t have a player with more than five kills. Its right-side hitter and outside hitter each had a negative hitting percentage.

Now that she's fully back, Lauren Stivrins has her sights on something else in last go-round with Huskers

In the first set, Nebraska hit out seven times but still won the set convincingly due to five ace serves. Nebraska finished with a .255 hitting percentage.

The Huskers have won 11 straight matches against Rutgers.

Nebraska middle blocker Kayla Caffey did not play due to illness, but she was in attendance after receiving a negative COVID-19 test. So Callie Schwarzenbach returned to the starting lineup and had five kills on .444 hitting.

Nebraska leads the Big Ten in serving in league play. In wins against No. 13 Penn State and Nebraska this weekend Nebraska had 18 combined ace serves, and its opponents just two.

“We’re feeling good about our serving,” Cook said. “This weekend on the road we really attacked with our serve. That really helps our block and defense.”

Krause, the freshman right-side hitter from Papillion, had a good weekend with 20 kills combined in two matches on .291 hitting.

“We got to have somebody be really good in that spot,” Cook said. “That’s a pretty good weekend for her on the road.”

Nebraska has a quick turnaround for its next match, hosting Indiana (8-10, 2-4) on Wednesday. 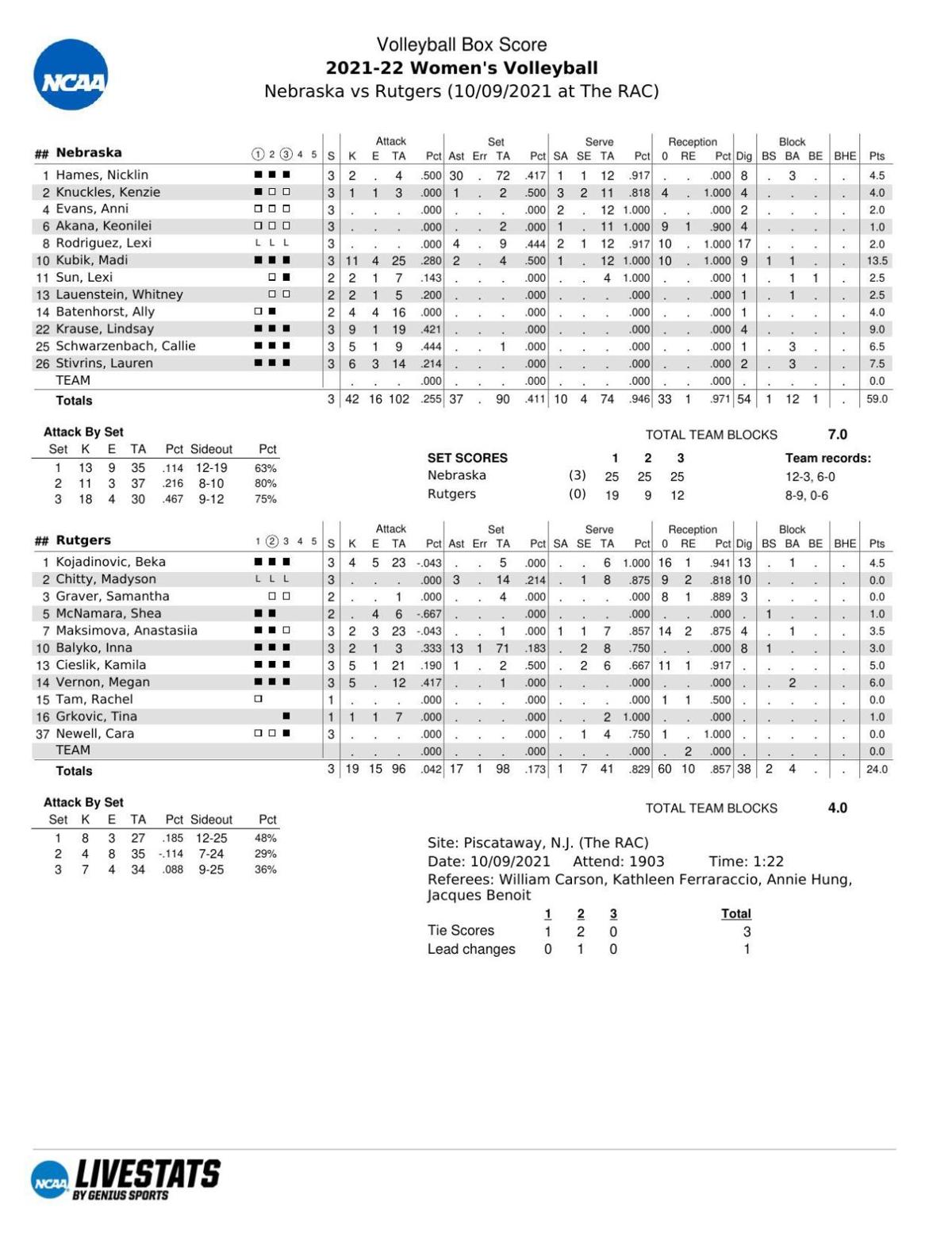 While Nicklin Hames only missed the team's opening weekend, the effects of her absence were felt well into the regular season.