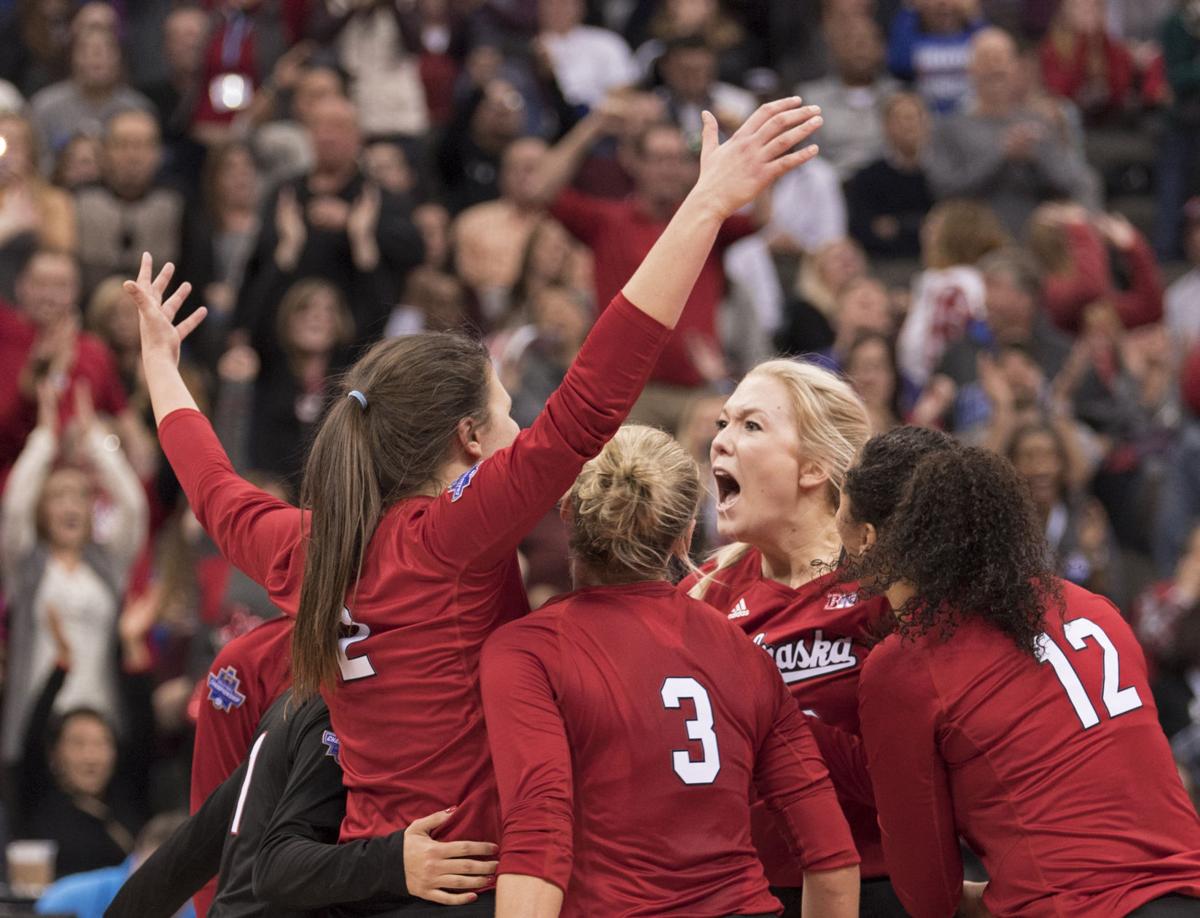 The Huskers react to set point in the the fourth set of their match with Penn State on Thursday at the Sprint Center.

KANSAS CITY, Mo. — Close your eyes, and you would have thought you were back in Lincoln.

Early during the national semifinal volleyball match against Penn State on Thursday, Nebraska got a block.

“Roof! Roof! Roof!” was the cheer from the Nebraska fans who had taken over the Sprint Center. Then another block, and then another.

That’s the cheer Nebraska fans do when the Huskers get a block in a home match, and that’s kind of what it felt like Thursday. And when Briana Holman drilled back an overpass for a kill as part of a 9-1 run in the first set, and the Nebraska fans went nuts, well, those are moments you remember even in a match that lasted nearly three hours.

Nobody was surprised, though, because the Nebraska volleyball program is a major source of pride in the state.

Nobody will dispute that football is No. 1 with its nearly 90,000 fans for home games, certainly not football-loving head volleyball coach John Cook. Men’s basketball also gets larger crowds, and people desperately want to be good in that sport.

Cook loved seeing the Nebraska fans among the record crowd of 18,374 fans Thursday, but he knows the pride in the team goes beyond what he could see.

“For those of you who don't follow our program, there were 1.8 million people watching this thing tonight in the state of Nebraska,” Cook said. “They're following this team, and you can see how many Nebraskans came down here. It's what makes it so cool about being a Husker and coaching and playing for Nebraska, because it is such a big deal.”

On Thursday afternoon there was a line of cars with Nebraska license plates lined up waiting to check in at a hotel near the arena. This year, this was the bowl game.

Nebraska volleyball fans love seeing the development in the players, and there has been plenty of that this season. Annika Albrecht went from a part-time defensive sub to a second-team All-American outside hitter. Kenzie Maloney went from launching serves out of bounds early in the season to confidently serving aces in the Final Four. Mikaela Foecke is making an impact all over the court, instead of just crushing kills.

Fans welcome in all the players, but take a certain pride in the in-state players. There are three such players this year: Kelly Hunter from Papillion, Sydney Townsend from Lincoln and Hayley Densberger from Malcolm.

So in Nebraska, where does volleyball fit in?

“I think it’s still second,” said Albrecht in a past interview, and it’s that humor and candidness that is also a welcoming quality that many of the players have.

Albrecht said it’s common to be stopped by fans in the grocery store or elsewhere. Albrecht and Townsend were at the store once, and noticed they had seen the same person a few times. Then the fan found the courage to say hello.

“They said, ‘I just have to say, Sydney and Annika, I love coming to your games,’” Albrecht said. “'You guys are awesome, and I’m sorry if I was scaring you, but I just had to make sure it was you.’ It’s fun.”

Each player has a similar story.

“It’s just crazy walking on campus and somebody knows who you are because they’re such a huge volleyball fan,” Maloney said.

“People in Nebraska are just the most friendly people I’ve ever met, so they’re not afraid to come up to you and say, ‘Hey good job, keep up the good work.’ It’s super-motivating.”

Last year when Nebraska played a match in the NCAA Tournament at 11 a.m. on a Friday, some businesses closed for a few hours. At schools across the state, students watched on TV.

In October a photo went viral. In Houston, the Astros were playing in the World Series. Every TV at a restaurant had the baseball game on except for one. The Huskers had a volleyball match on the Big Ten Network, and a fan got them to turn it on.

When Dennis Grabast from Lincoln began attending Nebraska volleyball matches years ago, you could get in free with your ticket stub from the football game.

“My wife and I just couldn’t get enough of it and so we kept going, and 22 years later, we’re still going,” said Grabast in an email.

Troy Stoller, a teacher and coach in Elkhorn, has a story about why he admires the volleyball program that has nothing to do with winning matches.

Several years ago his class of fourth-graders was on the UNL campus for a tour. Ndamukong Suh was working out in the weight room, and so were some of the volleyball players. The students asked Stoller to see if they could talk to Suh. Stoller asked the volleyball players for help, and they politely said, “Sure,” and got Suh to come say hello.

When he returned home, Stoller sent an email to Cook, apologizing for interrupting the players' workout. He was shocked when Cook replied.

Cook wrote that it wasn’t a problem at all, and that he tells the players to live by example and be first-class all the way.

“From that day I became a lifelong fan, and even try to be like him when I coach my high school girls in soccer,” Stoller wrote in an email.

For one last time this season, Nebraska fans will get to watch their Huskers on Saturday, and do so on the biggest stage. Nebraska will be trying to win its 18th straight match, and the program’s fifth national championship.

Regardless of what happens on Saturday, Cook said this team will go down as one of the program’s legendary teams.

“They'll be talking about this team for a long time,” he said.

Husker Extra Side Out: Live updates from Nebraska vs. Florida

Nebraska volleyball goes for its fifth national title, while Florida is chasing its first on Saturday at the Sprint Center in Kansas City.

Huskers and Gators for it all: A quick and breezy breakdown of Saturday's match

KANSAS CITY, Mo. — Kelly Hunter broke her social media silence on Friday morning, dusting off the Twitter machine and sending out a post. It a…

Watch: "This has probably been my favorite year since I've been here"

The Nebraska volleyball team met with the media following Friday's practice at the Sprint Center in Kansas City, Mo., in advance of Saturday's…

NCAA volleyball notes: Gators 'chomping' at the bit to play in front of prominent Husker crowd

KANSAS CITY, Mo. — Florida is well aware of the challenge that awaits it entering Saturday's national championship final against Nebraska.

KANSAS CITY, Mo. — The first matchup was 111 days ago as of Friday.

The Railyard is going to be hopping Saturday in what fans hope is a big night for Nebraska athletics.

Nebraska turns in a masterpiece for fifth NCAA volleyball title

For Nebraska volleyball players, the scrapbooks don’t have to end when high school does.

The Huskers react to set point in the the fourth set of their match with Penn State on Thursday at the Sprint Center.