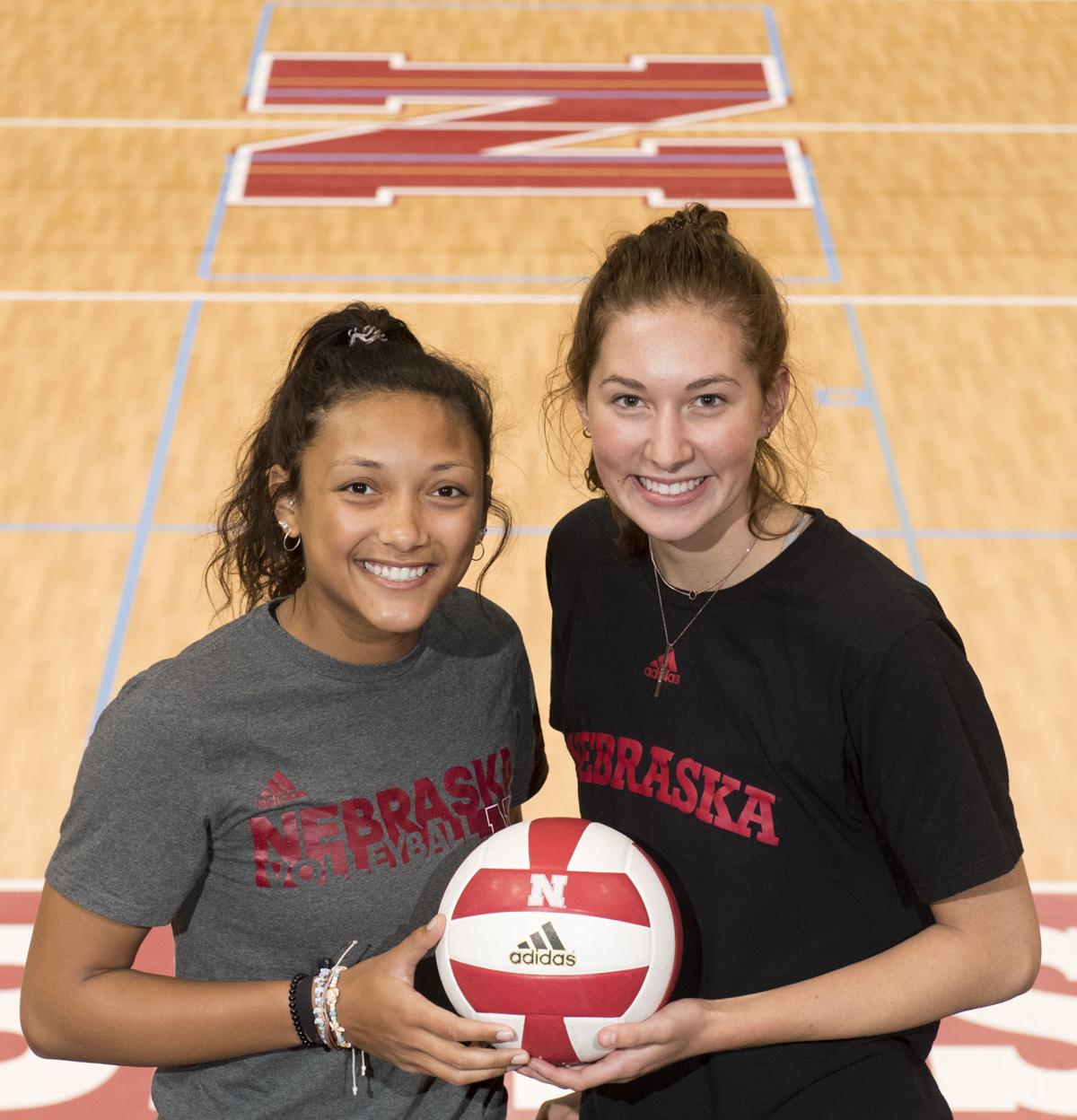 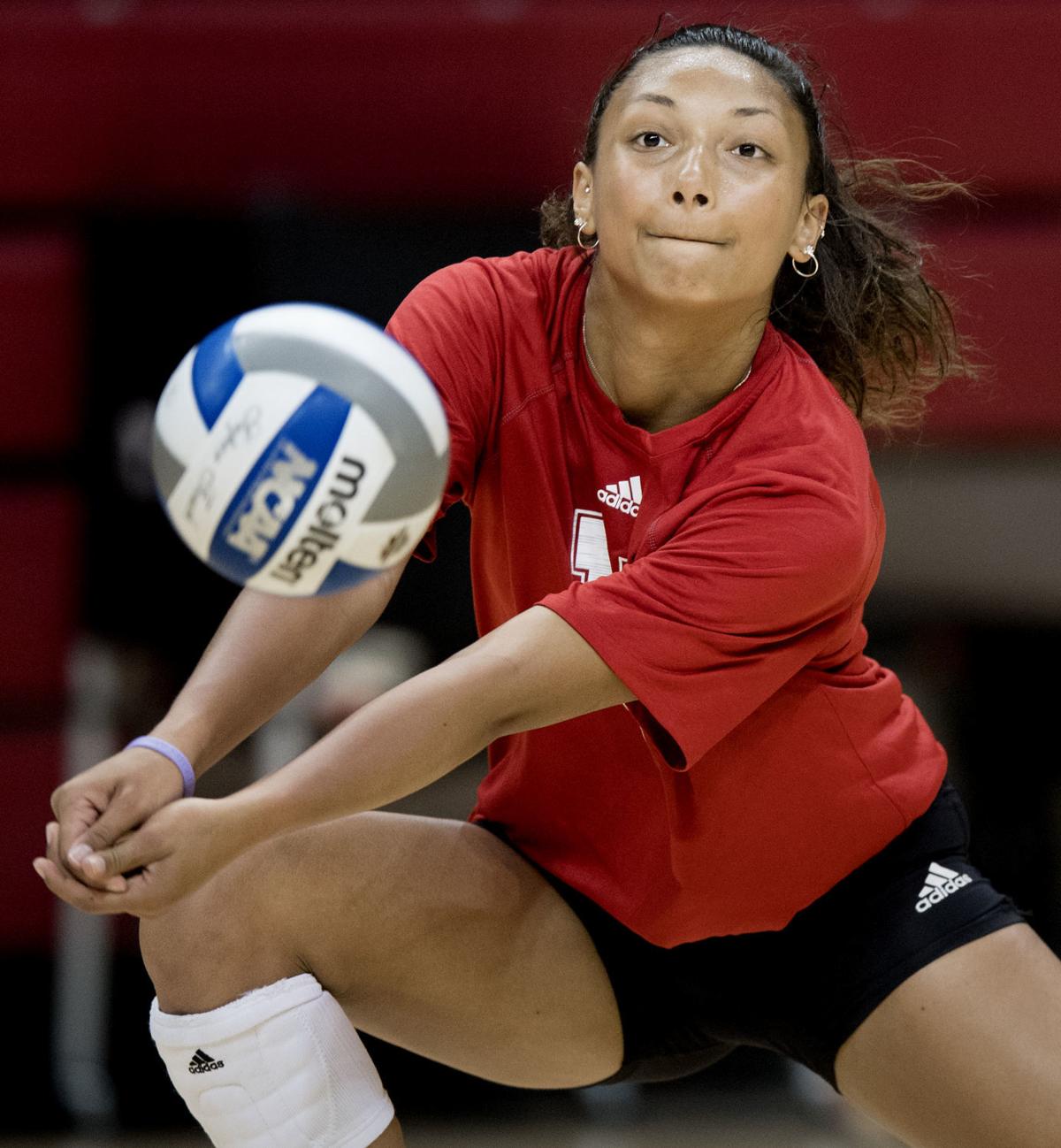 Nebraska's Kenzie Knuckles digs out a shot March 29 during spring practice at the Devaney Sports Center.

You have to have a plan when it comes to college volleyball recruiting, and with players committing early in high school, that plan looks several years into the future.

When the Nebraska volleyball team was recruiting Madi Kubik and Kenzie Knuckles about three years ago, it did so projecting that there would be open roster spots for the 2019 season at outside hitter and libero, with the graduation of Mikaela Foecke and Kenzie Maloney. Those are the positions Kubik and Knuckles play.

It all worked out, after Kubik and Knuckles committed to the Huskers about two months apart in the fall of 2016. And then it really worked out this January, when Kubik and Knuckles each were able to graduate from high school early and enroll at Nebraska. So about three weeks after Foecke and Maloney had their college eligibility end, Kubik and Knuckles were on campus and officially Huskers.

There are more comparisons. Kubik and Foecke are big hitters from Iowa, with Kubik coming from West Des Moines. Foecke and Kubik each was the Gatorade Player of the Year for Iowa, and each played with the U.S. youth national team. Foecke was the No. 2 national recruit, according to Prepvolleyball.com. Kubik is No. 4.

The obvious connection with Knuckles and Maloney is their first name. Also, they were each hitters in high school, but because they’re not tall enough to play outside hitter at Nebraska, are liberos now. They each also came a long way to play for the Huskers, with Knuckles from Indiana, and Maloney from Kentucky.

Knuckles was also the Gatorade Player of the Year for her state in 2018.

There have been a few other Nebraska volleyball players who have come early, including Kadie and Amber Rolfzen, and Hunter Atherton.

Nebraska coach John Cook thinks coming early is beneficial, but he also likes multi-sport athletes, and players have to give up winter and spring sports to come early.

Cook saw Kubik and Knuckles as players who would really benefit from coming early. They’re probably the two with the best chance to play a lot as freshmen. And Nebraska is going on its once-every-four-years trip to China this summer. At first they thought that only the freshmen who enrolled early could make the trip, but now all five freshmen can go.

“I said, ‘Madi, you have a great chance to be on the court and help us your freshman year, and you need to be on that Asia trip.’ So that got her going,” Cook said.

Kubik knew at the start of her junior year that she would probably graduate early. She didn’t get to do track as a senior, but she wasn’t as serious about that sport. And, yes, she still got to go to prom.

When Kubik first learned that it was possible to come early, she had mixed emotions.

“I was kind of thinking that sounds like an awesome opportunity, but I was also thinking maybe I want to close my high school chapter before I start the college chapter,” Kubik said. “Another thing that came to mind was how important it’s going to be if I plan to make impact, or be in the rotation at the beginning of my freshman year, that coming early would be huge to start getting reps and being on the same page as the team and just being in the gym and learning the system.”

Knuckles knew she wasn’t going to be playing club volleyball this winter, so it would be good for her to come early.

Now when a friend from home asks Knuckles how college is going, how does she respond?

“Pretty good. I actually really like it here,” Knuckles said. “I thought I would for sure be homesick maybe for a little bit, but I haven’t been homesick once, and I really like it.”

The Journal Star's Brent C. Wagner on what has become Nebraska volleyball's annual spring tour of the state, with this year's stop in Kearney.

Recruit says she's been given special opportunity with Huskers

Madi Kubik says she knows the special opportunity she’ll have when she gets to join the Nebraska volleyball program in a few years.

Volleyball recruit wants to be part of program's legacy

Kenzie Knuckles has been on championship volleyball teams before, and one day wants to be part of what she calls the legacy of the Nebraska vo…

'Signs of great teams': Huskers motivated after coming up short of national championship

Most college volleyball players will never get to experience what Nebraska’s Nicklin Hames did in 2018, playing in the national championship m…

There wasn’t much rest for the Nebraska volleyball players after they finished the beach volleyball season last week.

Lexi Sun will be a junior this season for the Nebraska volleyball team, but in some ways, she’s just getting started here.

'It's so nice to have you guys here': Nebraska volleyball team is talk of the town while in McCook for spring match

McCOOK — When the Nebraska volleyball team got here Friday evening, it was a supposed to be a low-key arrival. The team’s practice wasn’t open…

Nebraska's Kenzie Knuckles digs out a shot March 29 during spring practice at the Devaney Sports Center.